JUDY MURRAY: ‘When something needs doing, I get off my butt and do it’ 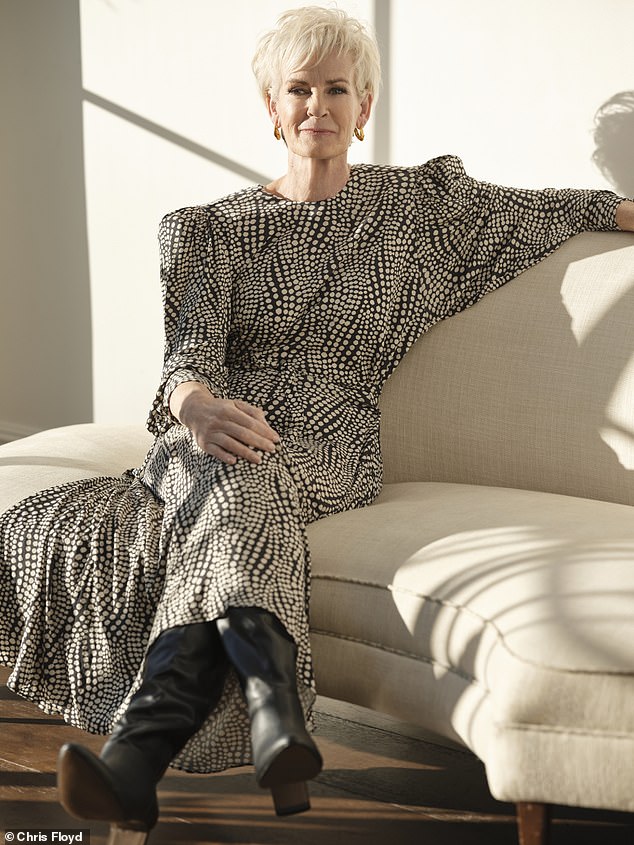 Despite turning her two sons into tennis superstars, JUDY MURRAY has always been dismissed as just a ‘momager’. Now determined to game-change women’s sport, she tells Judith Woods – underestimate me at your peril

Judy Murray is the sort of woman who gets things done. It stands to reason that a trailblazer who has spent her career promoting grass-roots tennis, rearing world champion sons Andy and Jamie and putting in a ten-year stint as the Scottish national coach would be a tremendously influential, highly prized strategist at the very heart of Britain’s sporting world. Except she’s not.

So why is the 61-year-old not a key mover and shaker at UK Sport? Or even included in the ranks of its sought-after consultants? As an insider told me: ‘If Murray had been a man she would be lauded and her advice sought by a whole raft of governing bodies. Instead she’s seen as a maverick.’

The inescapable, wholly unpalatable conclusion is that even in 2020, a strong, dynamic woman unafraid to express opinions still puts the frighteners on the male-dominated sporting establishment.

Or, to put it another way: despite being a former captain of tennis’s GB Fed Cup women’s team, holder of 64 Scottish titles in her own right and internationally recognised as one of the world’s best coaches for young players, bizarrely Judy Murray is still regarded as an outlier. Fabulously, she doesn’t much care.

‘When I see something that needs doing, I get off my butt and do it,’ she shrugs. ‘I don’t wait for anyone’s permission. Right from the start, because I was seen as “a mum” I encountered resistance when I lobbied for change, even when I was national tennis coach for Scotland. I felt I was always making presentations to men and I never got increases in funding based on what I or my stable of players had achieved – I’m absolutely convinced that was because I was a woman.’

Entrenched attitudes were the norm, says Judy. ‘I applied for a place on the Lawn Tennis Association’s highest coaching qualification course in 1994. There were 20 places – 18 men, two women. I was the only part-time volunteer coach. Everyone else was a full-time employed tennis coach. One male tutor told me I was lucky as “we had to turn a lot of guys away. In fact, we got a complaint about you from someone we turned down, saying, ‘What could she possibly offer when she has two kids?’” I couldn’t believe he told me that, on day one. It made me feel bad for about an hour. And then I went into what I call “f***-you mode”, where I blocked everything and everyone out and got on with it.’

As we all know, Judy and her ‘two kids’ went on to offer quite a lot. And she’s now convinced that it’s time to bring about a seismic shift in women’s sport. Not by lobbying, schmoozing or asking nicely but by going to the media. In a new Sky One series, Driving Force, Judy interviews sports stars including former swimmer Rebecca Adlington, sprinter Dina Asher-Smith, former runner Dame Kelly Holmes and cyclist-turned-jockey Victoria Pendleton, whose decision to quit cycling was due in part to the oppressive atmosphere of ‘sexism and bullying’ behind the scenes .

And by so doing, Judy shines a spotlight on a crucial aspect of female achievement that is seldom seen: namely, the struggles even the most talented girls face just to get as far as the court, pitch or starting line. 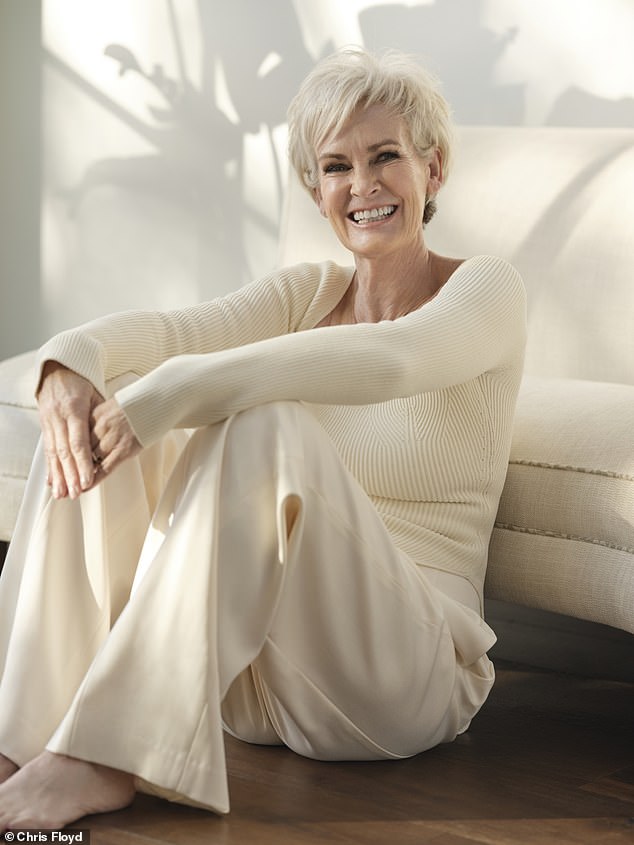 ‘I’m telling the back story of these amazing athletes, examining the people, events and places that inspired and helped them, but I also examine the obstacles they had to overcome on their journey and some of the pitfalls involved,’ she says. ‘What shocked me was the significant number of athletes, particularly Kelly and Victoria, who talked about depression and mental-health issues as a result of different pressures and forces.’

Having herself battled against both unconscious bias and overt prejudice, there could be no better champion than Judy when it comes to fair treatment on the pitch, track and court. ‘Equality isn’t just saying, “Here’s a free pitch, go play,”’ says Judy. ‘It goes far deeper than that. Boys and girls, men and women may be equal but that doesn’t mean they are the same. Female athletes differ not just in physiology but in psyche. That needs to be addressed, not because it’s a problem, just because it’s a fact.’

Judy, who founded She Rallies, a programme supported by the Lawn Tennis Association that aims to expand the number of women and girls coaching and playing tennis, has a masterful overview of the issues – and how to solve them. At one end of the spectrum is the need to encourage more girls to play more sport at school and in their community; at the other is the drive for excellence. The two are interconnected. ‘If you can see it, you can be it,’ says Judy. ‘Role models are hugely important in inspiring the next generation; look at the surge of interest in women’s football that has come with the success of the Lionesses. Every four years or so a Jessica Ennis-Hill will emerge and raise the profile of her discipline but we need more consistency. ‘The better women perform, the more watchable they are. The more watchable they are, the more visible they are. And the more visible they are the more sponsorship they will receive. That is what will determine equality.’

Judy believes there should be a concerted push for greater female representation in the teams that support the athletes, from fitness experts to psychologists. Sports coaches admit that from the earliest age it is evident that most (though not all) boys have the facility to brush off criticism, girls tend to worry and ruminate. Again, it’s not a weakness, just nature. Judy is adamant that being pro-woman is not a crusade against men. 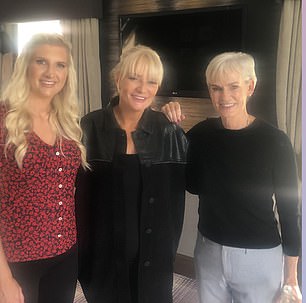 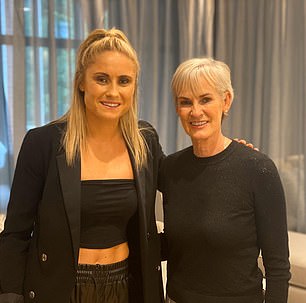 ‘Andy in particular has always been good at speaking out for women. He was also the first top male player to take on a female coach and he speaks up consistently about equality, which has a really big impact, ironically because he’s a man,’ she stresses. ‘This isn’t just about women; the importance of male advocacy to effect change is huge.’

There’s no question Judy has broad vision. She would like the annual BBC Sports Personality of the Year to be broken down into male and female categories, in order to create a more even playing field. She has a gimlet eye for granular detail too. ‘Plug sockets!’ she cries at one point. ‘We need far more plug sockets in changing rooms so girls know they can dry or straighten their hair after training. I’ve always worn my hair short because it was easier to manage; but the world has changed, social media has made even young girls a lot more conscious of their appearance and we have to adapt.’

It’s a briskly pragmatic attitude. The mothers of girls (like me) often claim the mothers of boys (like her) are different. As Judy herself notes with a wry smile, ‘I used to be a girl, so I do have an insight.’ But she concedes that as a mother of boys she was seen as an anomaly when Andy and Jamie were growing up.

It’s the unfortunate way of the world that female parents tend to be branded ‘pushy’ where male parents are seen as proactive. That would possibly explain why Richard Williams – father of Venus and Serena – is no doubt going to be lionised by Will Smith in the forthcoming biopic King Richard, while Judy has returned to grafting at grass-roots level.

Her back story is well publicised – her own memoir, Knowing The Score is a must-read for any parent struggling with the double-edged sword that is early talent. ‘I just thank God that neither of my boys was into swimming,’ she says. ‘Supporting children who want to play is a commitment but all those 4am starts to drive them to competitions would have killed me. At least tennis takes place in daylight hours.’ 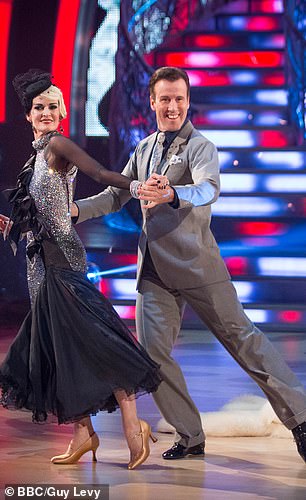 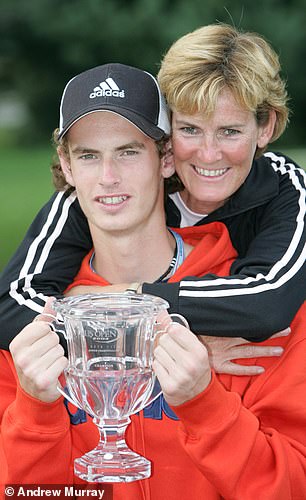 Left: On Strictly with Anton du Beke, 2014. Right: With Andy, after he won the 2004 us open boys Championships

This focused, eloquent woman sitting is by turns serious and funny – a far cry from the teeth-baring, fist-pumping ‘momager’ ridiculed by the tabloids. ‘If my kids had been good at football and rugby my face would have been lost in the crowd. The nature of tennis meant the cameras would focus on my face,’ she points out. ‘So, yes, I would be very involved – but you have to remember for most of their careers I was usually the only person in the crowd, so I needed to make my presence felt for their benefit.’

Even after Andy and Jamie’s careers had taken off, Judy’s sheer uniqueness meant she remained a household name. In 2014 she dazzled (these things are relative) on Strictly Come Dancing when she was rather ominously partnered with Anton du Beke, who is the go-to professional for ladies of a certain age. ‘I was terrible,’ laughs Judy. ‘But I loved every moment of it; as I get older I seize on every opportunity to learn and discover new things. I’d also like to state that I gave Anton – who is now a really good friend – tennis lessons, and I can report he was every bit as bad at playing as I was at dancing.’

Single (she divorced in 2005), friends mean a lot to Judy. Her otherwise unexceptional sweater and jeans combo is leavened by tremendous sparkly chunky boots which she bought, under peer pressure, on a girls’ trip to Madrid. Judy deftly bats away further interrogation about her personal life with the old ‘never say never, who knows?’ chestnut. ‘I like my own company and being able to do what I want when I want, whether that’s going to a spa or settling down in front of Netflix with a glass of New Zealand sauvignon blanc.’ Then she reveals she is a crisps and chocolate girl. Seriously, who does that?

‘Kettle Chips and Chocolate Fingers. I can polish off a box in a single sitting,’ she insists. ‘But I do a lot of swimming and in lockdown cycling has been my saviour. Everything in moderation.’

Everything apart from her passion projects, that is. She runs the Judy Murray Foundation, which brings tennis into rural and disadvantaged communities in Scotland. Next year should also see work finally begin on a lasting bricks-and-mortar legacy for Jamie and Andy in their home town of Dunblane: a state-of-the-art tennis centre with both outdoor and indoor courts, which Judy has spearheaded for the past seven years. It will be run as a charitable trust and she will have a base on site. Jamie and Andy were pupils at the town’s primary school in 1996 when 16 children and a teacher were shot dead by a gunman who then killed himself.

But first and foremost she will be fronting the Driving Force roadshow, an exciting opportunity for girls and women to meet the athletes and experts who took part in the series, hear talks and attend workshops. Judy’s eyes glint at the prospect of spreading her message of equality. ‘In male sport there are an awful lot of egos. Women share things – we feel comfortable with collaboration and we’re all the stronger for it.’ In Judy Murray girls have both a powerful champion and a role model to be reckoned with.