Bayern Munich and Julian Nagelsmann are a pairing made to destroy any hope that was left among the contenders in the Bundesliga.

Bayern are already miles ahead of their domestic rivals and have now signed the coach of RB Leipzig, who have been the only credible challenger this year. The move is a demonstration of pure dominance.

Nagelsmann arrives in Munich as one of the most highly rated young coaches in Europe. The 33-year-old came into the Bundesliga in 2016 and has quickly risen to the top, first rescuing Hoffenheim from relegation before leading them to the Champions League for the first time and then taking over Leipzig with whom he reached the Champions League semi-finals.

In the past six years, he was in talks with Bayern on more than one occasion. Already in 2017, the German record champions considered Nagelsmann for the managerial position but had concerns about his lack of experience. These concerns have disappeared.

Nagelsmann himself has never hid his ambitions to join Bayern one day. He hails from Landsberg, a small town close to Munich, and grew up a Bayern fan. Nagelsmann played for local rival 1860 Munich as a teenager. He even owns a house near the Bavarian capital where his young family has been living during his tenure at Leipzig.

Once it became clear that Bayern’s current manager, Hansi Flick, would want to terminate his contract at the end of the season due to ongoing tensions with the club’s hierarchy, Bayern shifted their attention to the best successor available. When Nagelsmann learned about the interest from his dream club, the decision was a no-brainer for him.

What Bayern get is a young, yet already seasoned coach who is obsessed with football. “I often deliberately overwhelm my players. I give them 10 things a day and they learn four of them,” he once explained.

He himself thinks about football all the time. It could be that he comes up with a new pressing scheme sitting at his coffee table or with a valuable training exercise while going for a walk. Football is not his job, it is his life.

Part of Nagelsmann’s success has been that he implemented plenty of changes at his clubs. For instance, he asked Hoffenheim for a “Footbonaut”, a cage where balls are fired at a player and they have to pass it back to one of 72 highlighted panels to improve reaction and precision, and a giant video wall to be installed next to the training pitch.

Because Nagelsmann never played football at the highest level, doubters saw him as part of the “laptop generation”, meaning coaches who are highly educated but lack the experience of what it is like to perform on the pitch against world-class opponents. However, he, who possesses a degree in sports science, has proven that he is not a theorising scientist.

“For me, being a top coach means more than just teaching football,” he explained. “That includes empathy. It means that you can speak to a group, that you can deal with the media.” The fact that some of his players are older than him has never undermined his authority. His tall stature and the conviction in his voice are helpful tools to create an aura. 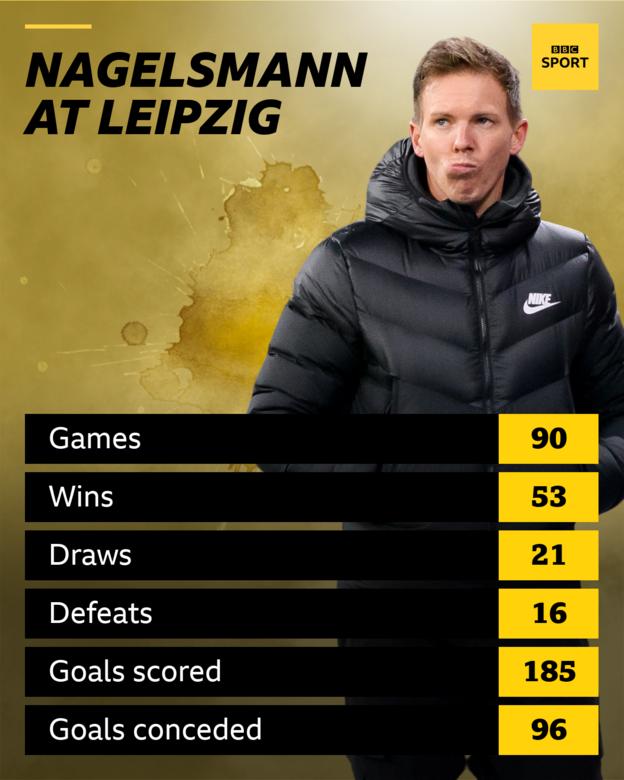 While his tactical understanding of the game has helped him to stand out, Nagelsmann attributes only 40% of success in football to tactics and 60% to motivation and locker room leadership. This world view might be very valuable at a club like Bayern.

Because he considers his main task to improve the performance of his players rather than being involved in transfer decisions, he might not clash with the higher-ups – unlike his predecessor Flick. Also, emphasising man-management and relying on a proven success formula has worked very well for Bayern in recent times.

Flick has not attempted any tactical experiments in the past 18 months, acknowledging that his players already knew how to create goal-scoring opportunities and defend effectively.

At Leipzig, Nagelsmann has often tinkered with different formations and in-game changes. But Leipzig are also a team that need more input from the side-line than Bayern. It will be interesting to see whether he is more hesitant to try out any new tactical systems with Bayern’s team.

With his arrival in Munich, Nagelsmann’s world will change. He has never been under any real pressure at his current club. Even after painful defeats, like the 5-0 loss to Manchester United last October, no-one started to question his competence.

In contrast, the work of Bayern’s coach is usually put under a microscope, as the higher-ups, as well as the local media, expect at least one or two trophies a year. Nagelsmann has not won any silverware in his senior coaching career.

Come August, he has to start aiming for titles.