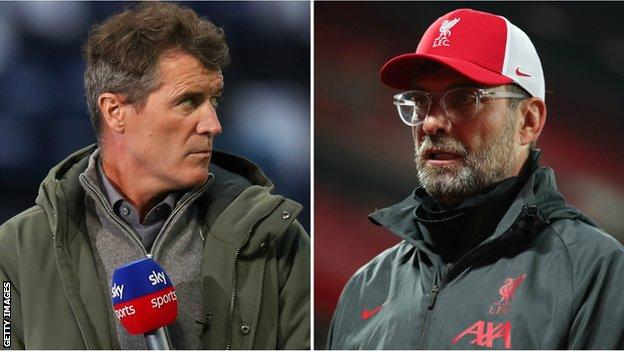 It was a post-match interview that should have featured a delighted Jurgen Klopp, but instead it turned into a tense exchange on live television.

Liverpool had just despatched Arsenal with a comfortable 3-1 victory in which they had 66% possession and 21 shots on goal compared to four from the Gunners.

Klopp appeared in front of the Sky Sports cameras and laughed as Jamie Carragher gave his verdict, but his face soon dropped when he caught the word “sloppy” from ex-Manchester United skipper Roy Keane.

Asked about the match, an incredulous Klopp began by asking: “Did I hear right, Mr Keane said we had a sloppy performance tonight? Did he say that?”

With Carragher sniggering in his seat, presenter David Jones handed the floor to Keane.

“I think they gave up one or two opportunities which he will be disappointed with,” responded Keane.

Klopp wasn’t backing down. “Did he say that it was sloppy? I want to hear it. I am not sure I heard it right and maybe he was speaking about another game.

“It cannot be this game. Sorry, that is an incredible description of this game.”

The German went on: “That was absolutely exceptional. Nothing, absolutely nothing was sloppy. Dominant against a team 100% in form and be careful as hell that we did not get caught on the counter-attack.

“Alisson had to make one save, they had two chances in behind but apart from that the football we played was exceptional tonight.

“This game tonight – there is nothing bad to say. It was the opposite of sloppy.”

Keane looked to defuse a situation for the possibly the first time by saying: “You might have mis-heard me. There were sloppy moments but I think you have been outstanding and I have been giving the club nothing but praise. I am not sure you heard me correctly, you need to hear the rest of it.”

But Keane had the last word after the post-match interview.

The exchange certainly caught the imagination of fans on social media…

Liam: Keane v Klopp is the highlight of my Monday.

Rachel: Klopp giving it to Roy Keane with both barrels.

Adam: Keane spot on, Klopp totally in the wrong.