Just 0.05% of healthy under-70s who get Covid-19 will die from the disease, study claims

Covid-19 may actually only kill one in 2,000 healthy people under the age of 70, according to research.

Dr John Ioannidis, from Stanford University, claims the infection-fatality rate (IFR) could be as low as 0.05 per cent in a review of antibody surveillance studies.

His estimate — published by the World Health Organization — is five times lower than his previous claim that the IFR for all age groups stood at 0.25 per cent. For comparison, seasonal flu kills around 0.1 per cent of everyone it infects.

The epidemiologist is under investigation at Stanford for allegedly underestimating the lethality of coronavirus, after sparking alarm when he released a study claiming the virus was 54 times more prevalent than thought in April.

His latest work has already been criticised by other scientists, who say he used figures from their studies incorrectly and ‘inappropriate’ populations with which to establish the IFR.

The scientist based his new estimate in under-70s on data from 61 different testing surveys carried out worldwide. He did not present an official estimate for the death rate in over-70s but suggested it was similar to 0.25 per cent. 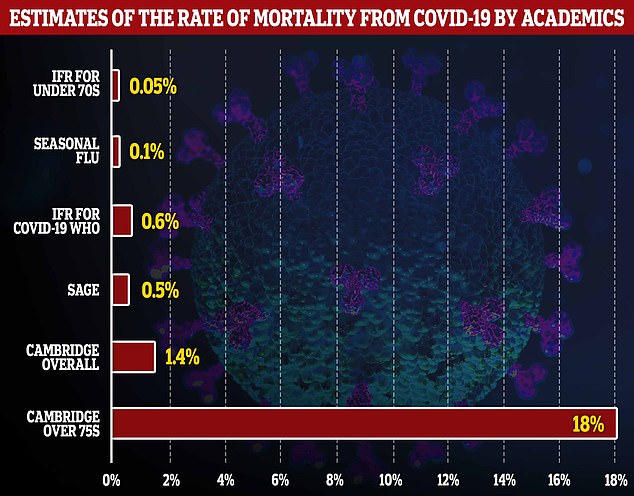 Researchers at Stanford University, including Dr John Ioannadis, have been accused of ‘tipping the scale’ on in a study of the coronavirus and implying it is more widespread – but less fatal – than previously thought.

An analysis they published in April found that between 2.5 and 5.2 per cent of residents in Santa Clara, California, tested positive for Covid-19 antibodies. That meant the number of infected people in the county was 50 to 80 times higher than officials had reported.

But the study was not peer-reviewed by other scientists, many noticed the way calculations were made was not explained, and several found mistakes in the methodology.

In Version 2, the team walked back its earlier estimates and said only 2.8 per cent of Santa Clara residents contracted the virus but didn’t know they were ill.

That was 54 times more than the 956 confirmed cases that had been counted in the area as of April 1.

The university is now investigating the research to see if the analysts were politically motivated or inaccurate and misleading.

The findings, published by Dr Jayanta Bhattacharya, Dr John Ioannidis and Dr Eran Bendavid, were astounding because they meant the virus was much more widespread and that the death toll was much lower than believed.

However, not long after version 1 came out, criticism started pouring in.

Some experts critiqued the antibody test the researchers used, which was not approved by the US Food and Drug Administration.

Others said that, because volunteers were recruited via Facebook, the participants were not random nor representative of the county.

Additionally, the raw percentage of people who tested positive for antibodies was 1.5 percent, significantly lower than the final percentage the researchers published.

A few weeks later, the revision was published saying that the estimated rate of infection was on the low end of their initial predictions.

Experts have yet to agree on exactly how deadly the virus is. The WHO says 0.6 per cent of those who get Covid-19 die overall — but scientists admit the disease preys on the elderly and poses a bigger danger to over-70s.

Flu also poses a greater threat to the elderly.

The Government’s Scientific Group for Emergencies (SAGE) has put the IFR at 0.5 per cent, and academics at Oxford University have used modelling to suggest a rate of 1.4 per cent.

Dr Ioannidis used antibody studies — which are considered the best way to discover the true size of Covid-19 outbreaks — to work out the IFR.

The size of outbreaks in many countries remains a mystery because of a lack of testing in the early stages of the pandemic, which began in China last December.

Antibodies are produced in response to infections and can stay in the blood for months afterwards, as the immune system stores them to remember how to fight off different pathogens.

This means they can be a useful proxy for the prevalence of a disease.

But scientists have urged caution when using this data because it is unclear how long antibodies actually remain in the bloodstream for when an infection has subsided.

And some studies have suggested that patients who endure only mild symptoms produce barely-detectable levels of them.

Seroprevalence samples carried out on 9,343 Britons by the ONS suggest one in 16 people would have the antibodies in their bloodstream if everyone was tested today — or up to 3.2million people.

In Dr Ioannidis’ study published in the WHO’s Bulletin, which claims to have been peer-reviewed, 82 estimates of the IFR from 61 studies carried out across the world were used.

Antibody prevalence in the samples ranged from as low as 0.1 per cent in the Bay Area, California, to 53.4 per cent in Barrio Padre Mugica, Argentina.

Dr Ioannidis took the data from each region and divided the number of Covid-19 deaths by the number of people estimated to be infected, to give a median infection fatality rate of 0.27 per cent.

He then says that, when people over 70 were removed from the figure, the median IFR falls to 0.05 per cent.

He says in his conclusion that the infection rate ‘varied substantially’ across regions, claiming this ‘may reflect differences in population age structure and case-mix of infected and deceased patients and other factors’.

Slamming the work, PhD epidemiology student at the University of Wollongong, Australia, Gideon Meyerowitz-Katz, said the low infection rate is ‘simply a consequence of the low quality of the review itself and has very little to do with when the estimates were made’.

‘Interestingly, Ioannidis cites our study but gets the numbers wrong,’ he said.

‘In what is distressingly something of a trend in the paper generally — we actually estimated 0.68 per cent in the published paper which came out recently’.

He added: ‘There are also still clear numeric errors remaining from previous versions of the study.

‘For example, this number from a paper looking at people going to hospital in New York should read 44 per cent, and not 47 per cent.

‘And there are new errors as well. In this study of blood donors in Rhode Island, the authors estimate a seropositivity of 0.6 per cent, while the review paper has 3.9 per cent instead. 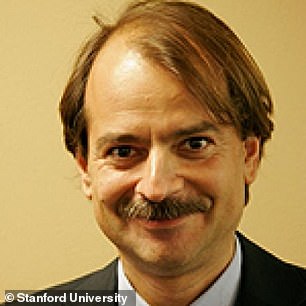 Dr John Ioannidis, from Stanford University, is under investigation for underestimating the lethality of Covid-19

‘But by far and away, the biggest error in the text is simply to do with using clearly inappropriate samples to estimate population prevalence.

‘This is a fundamental flaw in the paper, and really something of a basic epidemiological mistake.

Mr Meyerowitz-Katz added: ‘Some of these studies are just so clearly inappropriate to infer a population estimate that it doesn’t really require explaining. Samples of a single business in a city, or inpatient dialysis units.

‘There are also a lot of included studies from places in which there is almost certainly an enormous under-count of deaths. For example, India, where the official death counts may represent a substantial underestimate.’

And PhD student at the University of Wurzburg, Germany, Fabian Boetzl, an ecologist said he ‘cannot understand’ how Dr Ioannidis arrived at his rates because ‘it is not really described in the manuscript’.

Stanford University said in a statement: ‘In regard to the pre-print antibody study, we have no update at this time.’

The WHO said in a statement: ‘The Bulletin of the World Health Organization was created by WHO as a forum for public health experts to publish their findings, express their views and engage a wider audience on critical public health issues of the day.

‘Consequently, the views expressed by the writers in these pages do not necessarily represent the views of WHO.’