Pub baron Justin Hemmes spent his Easter Saturday partying on boat with seven bikini-clad women – when there were up to 129 million reasons why he could’ve had a low-key long weekend.

The Rich Lister, 48, shrugged off a major blow to his Merivale empire in court last week to make merry with a bevy of beauties in perfect 27 degree weather on Sydney Harbour.

The shirtless chief executive was photographed ferrying the women – including model love interest Madeleine Holtznagel, 24 – and two men to his waterfront property in Vaucluse via speedboat about 7pm.

Several ladies danced to thumping music as Hemmes pulled in to the jetty of his heritage-listed mansion. ‘They were clearly having a good time,’ one observer said. ‘It looked like they’d been out on a bigger boat all day.’

Hemmes’ love interest of late, 24-year-old model Madeleine Holtznagel, was seen draping her arm around his neck as he steered the boat.

At another point, the pub baron placed his arm around a brunette guest to show her something on his mobile phone screen.

The weekend good vibes came just days after Hemmes’ company suffered a major blow in the Federal Court last Tuesday which could see 14,000 one-time Merivale employees back paid up to $129million in wages. 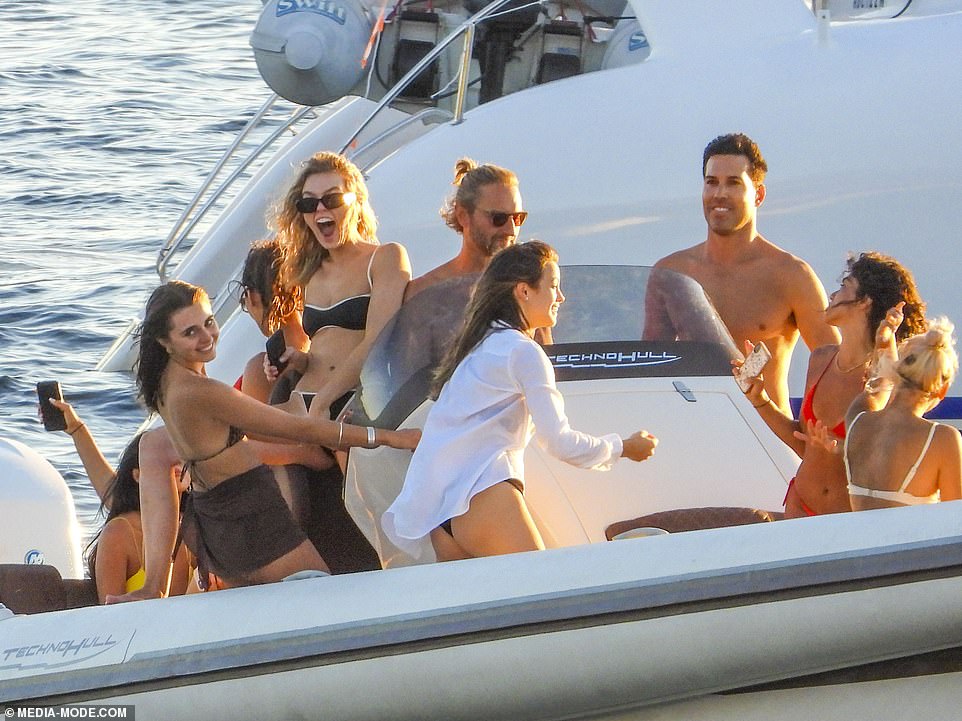 ‘They were clearly having a good time’: Billionaire pub baron Hemmes, 48, ferried at least seven women 0 including love interest Madeleine Holtznagel – and two men back to his historic Vaucluse mansion on Saturday night 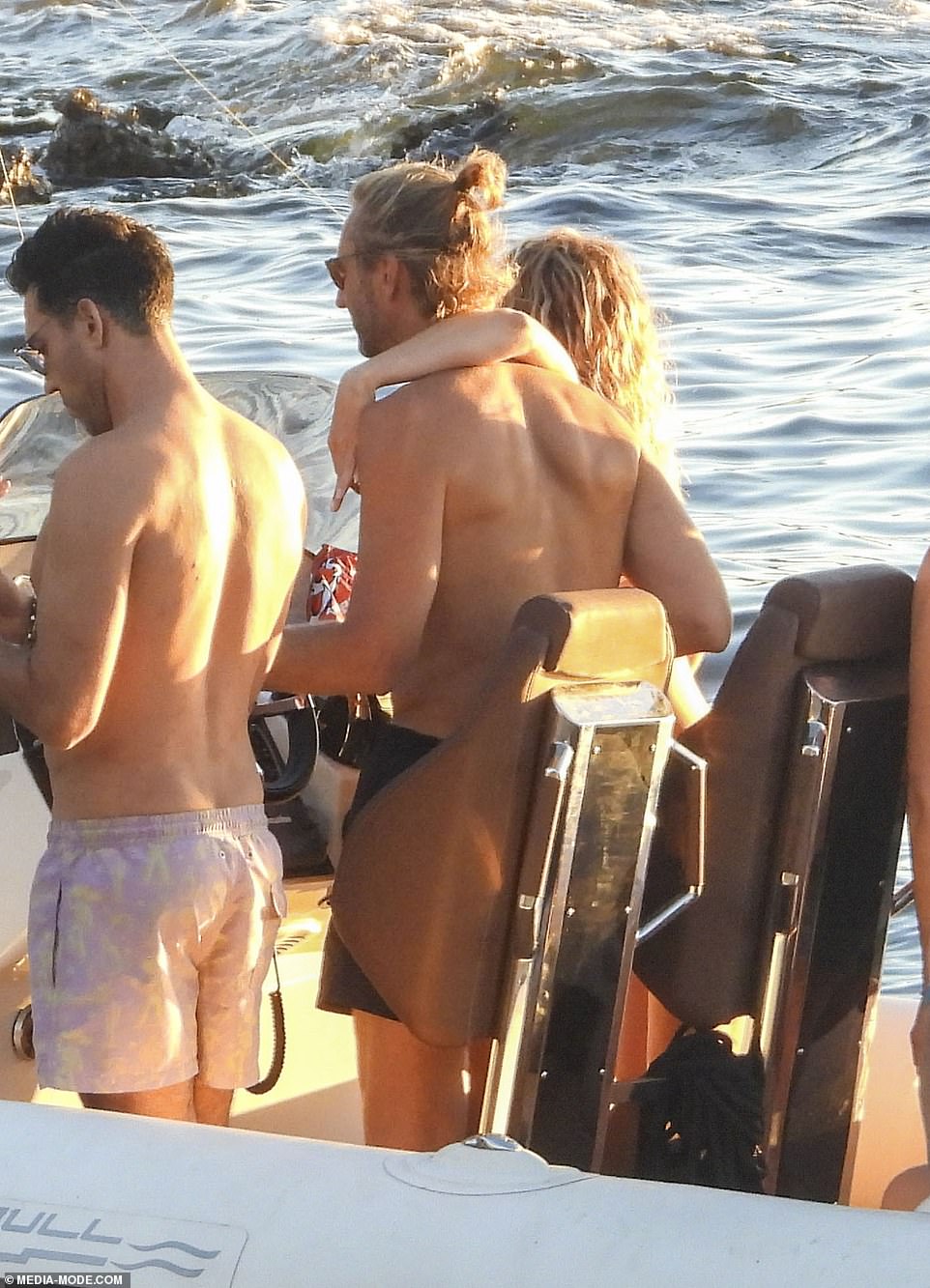 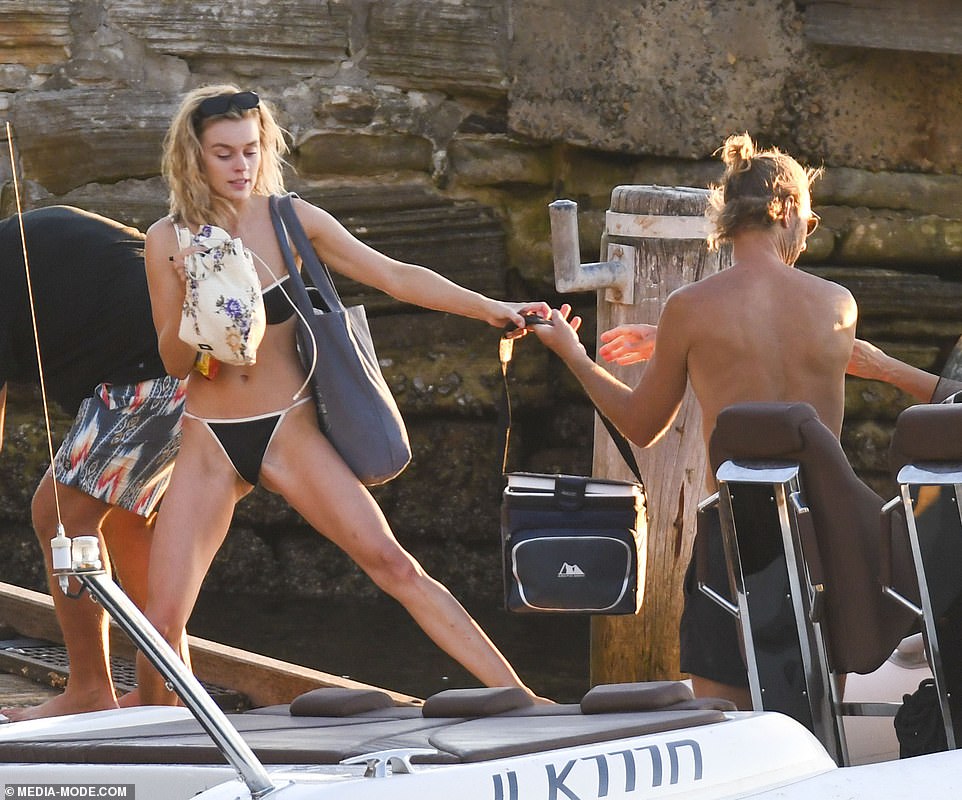 Ever the gentleman, Hemmes assists Ms Holtznagel  with a bag as she alights his boat 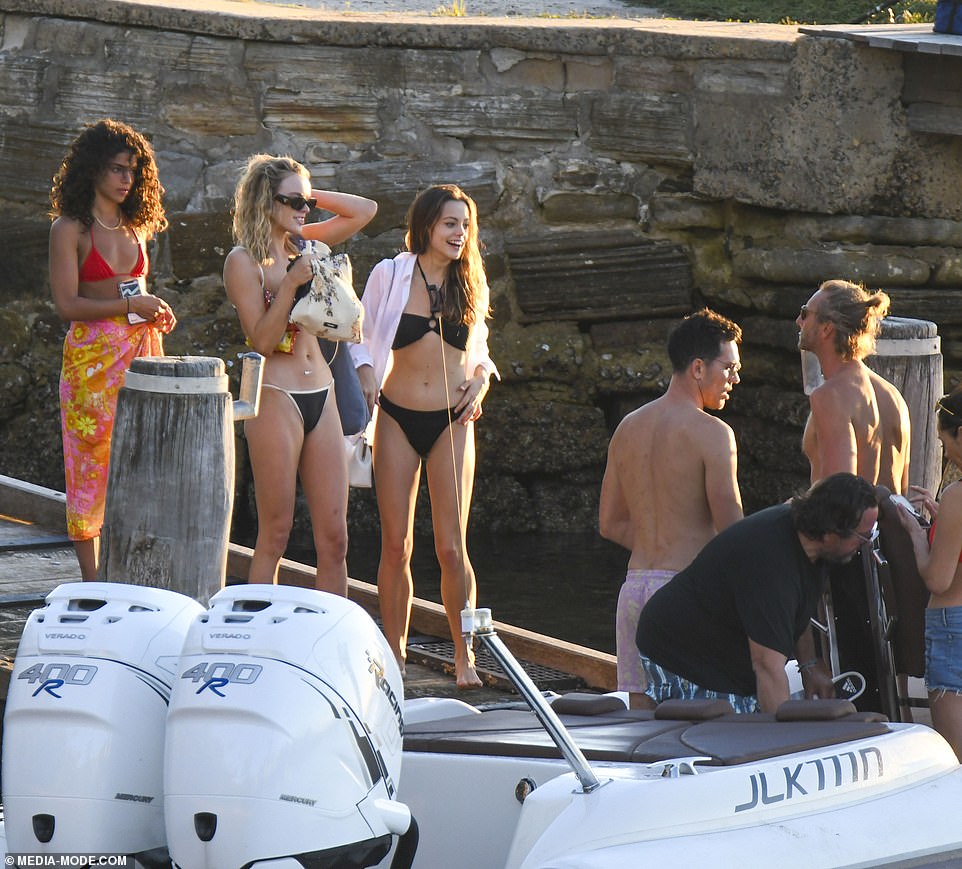 All out who’s getting out: The women, above, were dropped off at Hemmes’ historic waterfront mansion in Sydney’s Vaucluse via jetty

Hemmes’ Merivale runs some 70 pubs, restaurants and hotels across Sydney, including some of its best known venues: the Coogee Pavilion, Newport Arms Hotel, The Ivy and the Establishment.

Last week Justice Tom Thawley ruled that a 2009 WorkChoices agreement that Merivale struck wasn’t validly approved in the first place, despite passing a so-called ‘fairness test’ with the regulator.

The decision means more than 14,000 staff could then instead be covered by the industry award and owed backpay of penalty rates and overtime between 2013 and 2019.

In a statement, Merivale told the Australian Financial Review that the decision was ‘extremely concerning’ because it believed their agreement had met the so-called fairness-test that applied at the time.

As the court case continues, Merivale is expected ask the judge to use his discretion to waive compensation because the regulator approved the wage deal in error.

Adero Law, which is running the class action, told Daily Mail Australia that it would counter any such move by arguing Merivale’s employees are the real victims.

‘We think that we can overcome Merivale’s argument,’ said Tom Hakkinen, senior associate at Adero Law.

‘Even if Merivale are an innocent party because they relied on an officer of the Commonwealth, its employees are a third party affected and also an innocent party we would say who are more innocent – and they had no idea what was going on. 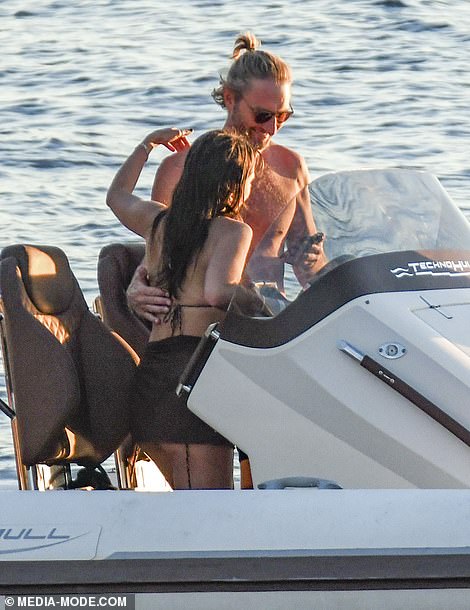 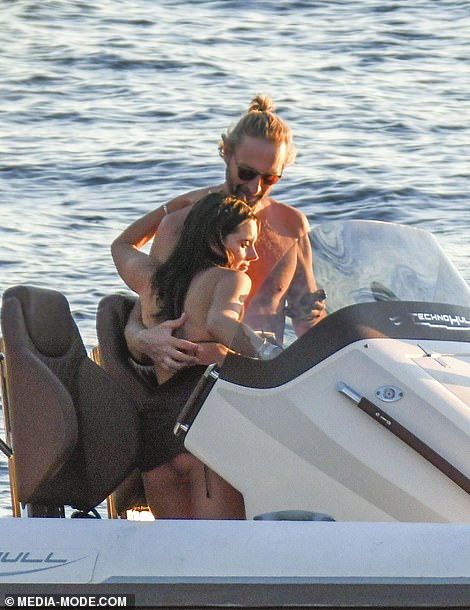 Hemmes appeared to show a mystery brunette guest aboard the speedboat something on a mobile phone. The pair got close (on right) to inspect it 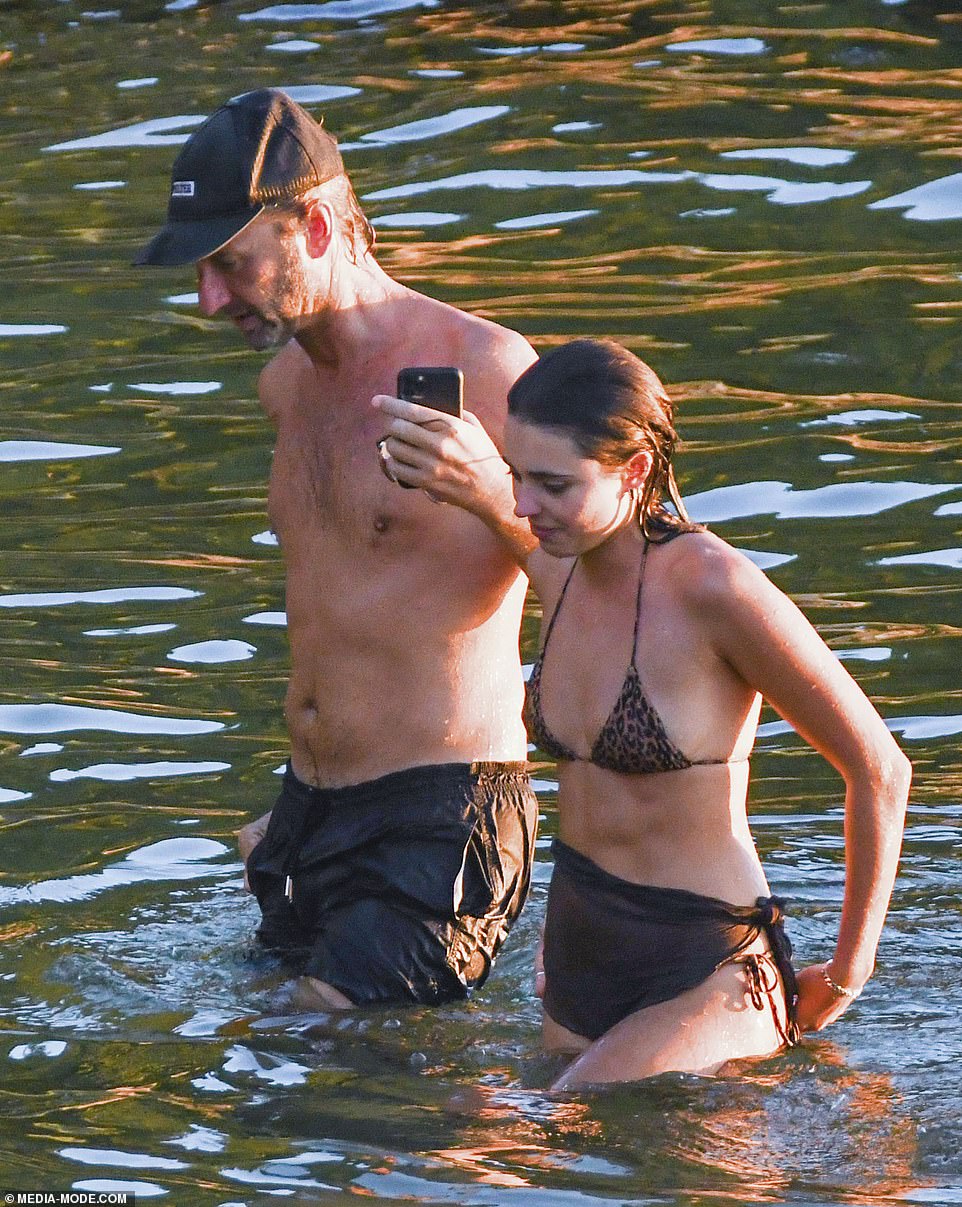 Hemmes, the mystery brunette and another man waded into shore after parking the boat – Hemmes clutching a mobile phone throughout

‘Surely Merivale should not succeed against the safety net entitlements of its employees.’

Adero’s principal, Rory Markham, said: ‘There is no precedent ever that has allowed an employer to escape paying safety net wages to workers.’

Mr Hakkinen said the court should take into account that ‘Merivale had a huge industry advantage against competitors who didn’t have a pay agreement that undercut the award.’

Merivale has said it will defend the class action until its final hearing, with a spokeswoman telling the Financial Review it ‘denied liability in relation to the claims in the proceedings’.

Hemmes took over the Merivale group in 1997 from his father, John, who named Merivale after his wife. He runs the business with his sister, Bettina.

Hemmes’ love interest, Madeleine, told the Sydney Morning Herald last October she was yet to introduce Justin to her parents.

‘My parents and my sister Anna haven’t met him yet, but (her other sister) Simone has been introduced to him and really liked him,’ she said.

When asked about his new romance, a coy Justin the told newspaper at the time: ‘We hang out a bit.’

Covid: Tests to be offered twice-weekly to all in England

Advent calendar to a healthier you: 24 small tweaks that can give you the gift of wellbeing

Iran: Suspending the additional protocol will reduce the IAEA’s oversight of our nuclear activities