Juventus 0-2 Barcelona: Ronald Koeman’s side pick up big win in Turin with strikes from Ousmane Dembele and Lionel Messi the difference as Alvaro Morata sees THREE goals ruled out for offside!

Not a bad couple of days for Lionel Messi – on Tuesday night president Josep Bartomeu finally quit. On Wednesday night he scored from the spot as his team beat Juventus 2-0 in Turin.

Alvaro Morata had a hat-trick of goals ruled out by VAR – all of them correctly – but Barça deserved to take the three points after creating 14 chances at the Juventus Stadium.

Ronald Koeman’s side took the lead on 14 minutes when Dembele took a cross-field pass from Messi and cut inside before turning back on to this right foot and unleasing a powerful shot that flashed past Wojciech Szczesny having taken a slight deflection from Federico Chiesa. 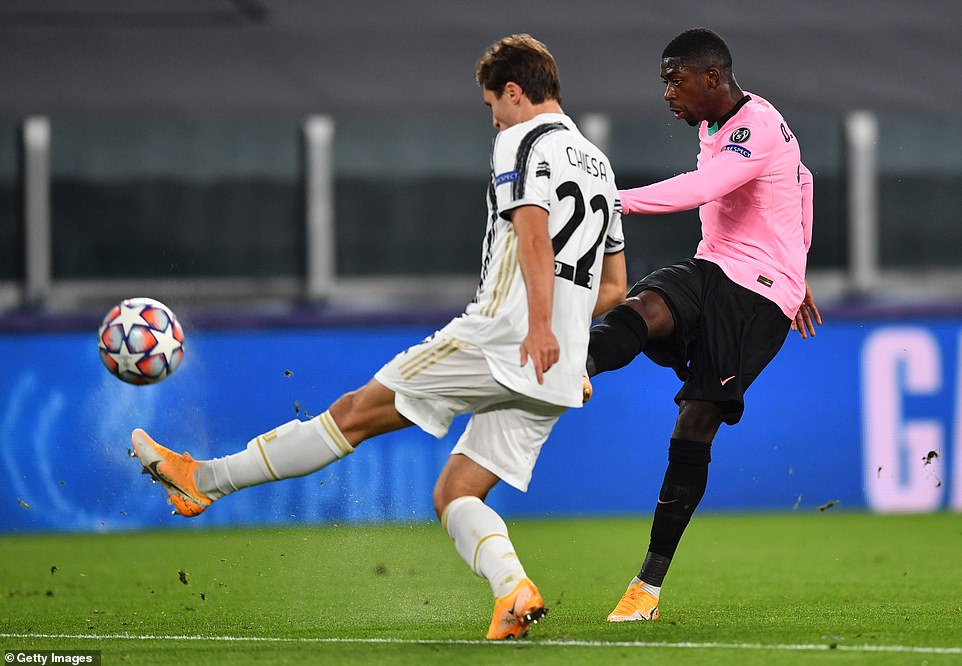 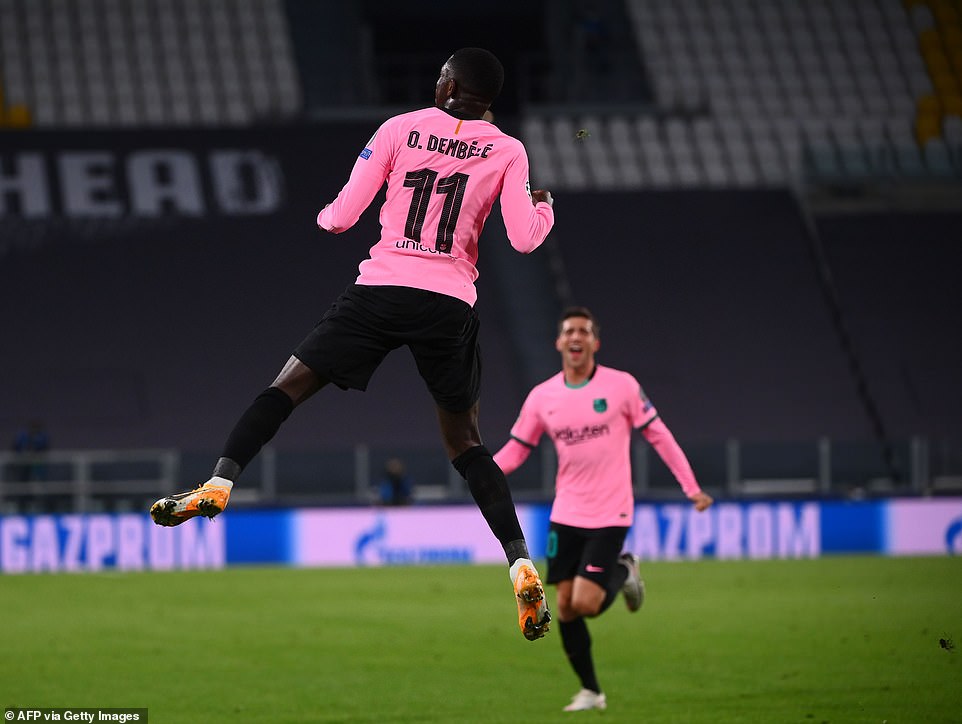 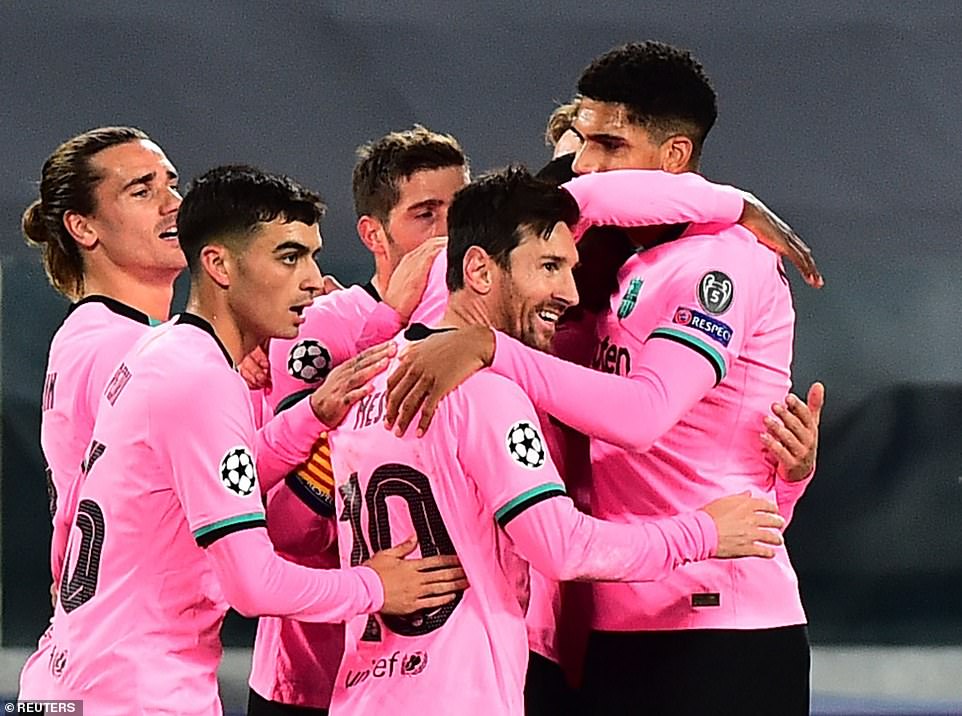 Barcelona were on top with Dembele stretching Juventus and down the right and Pedri coming in off the left wing to combine well with Messi and Antoine Griezmann.

Barça’s only crime was not to extend their lead. Messi fed Dembele and when his first shot was charged down he touched the ball back to Griezmann who should have finished. Inexplicably he appeared to try to pass to Pedri and Juventus broke down the attack.

They had chances of their own twice Alvaro Morata had the ball in the net twice but both times the flag had been correctly raised.

Barcelona had to make a change at the break when Ronald Araujo, who had hobbled through the closing stages of the first half, did not reappear and Sergio Busquets had to come on. Busquets went into midfield and it was Frenkie de Jong who took Araujo’s place in the centre of defence.

Barcelona started the second half well with long period’s of possession but it was all sizzle and no steak and they would have paid for their failure to turn pressure into goal had Morata’s VAR curse not continued. From another cross from the left he got in front of Clement Lenglet to score past Neto. Again after a lengthy check VAR ruled that he had one foot offside and Barça maintained their lead.

Dembele squandered Barcelona’s next chance. Pedri skipped away from Cuadrado down the left and crossed for Messi. He teed-up Dembele but the winger lacked the confidence to shoot first time and the move break down when he crossed straight to a Juventus defender.

Dembele was replaced by Ansu Fati as Koeman tried desperately to put the game to bed. Juventus were still threatening and from Morata’s assist Dejan Kulusevski almost scored with a clever chip.

Fati set-up Messi and quick-stepped into the area through a huddle of Juventus defenders. Danilo was the last man he had to beat but his block brought the move to an end. Griezmann then sent another wide – it was Barcelona’s 13th chance. They were finding holes in Juventus below-strength defence but still the second goal would not come. Messi led the charge again and Rabiot was booked for kicking him as honed in on the Juventus goal.

With six minutes left Juventus were reduced to 10 when Merih Demiral was shown a second yellow for a wild lunge on Miralem Pjanic. Surely now Barcelona would get the win their domination deserved. Messi scored from the spot on 90 minutes after Fati had been flattened by Federico Bernardeschi in the area.

Fati should have scored three minutes into injury time but tried to pass to Abla and over hit the pass. It was ridiculous from the sublime youngster who had got his team over the line after coming off the bench.

Barcelona’s finishing had not been great but they finished the night on top of their group – clasico wounds healed and on course for qualification to the knockout rounds. 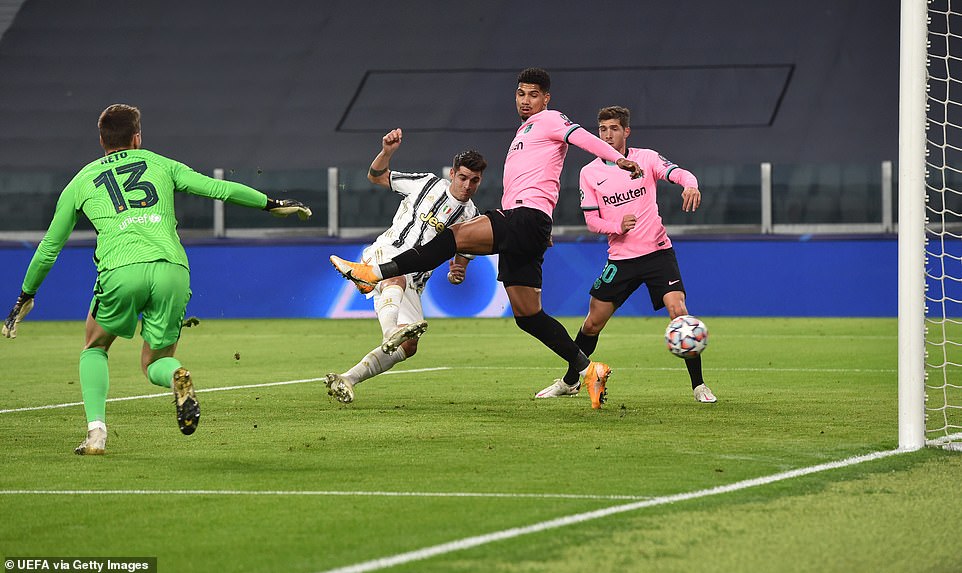 Former Chelsea and Real Madrid star Alvaro Morata saw two first half strikes ruled out, both due to offside offences 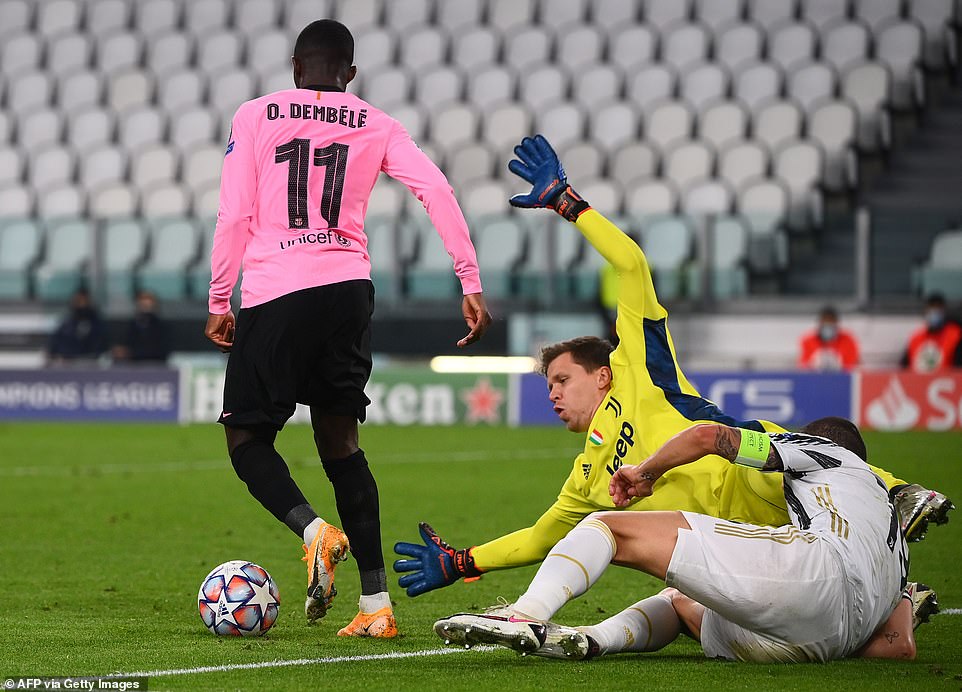 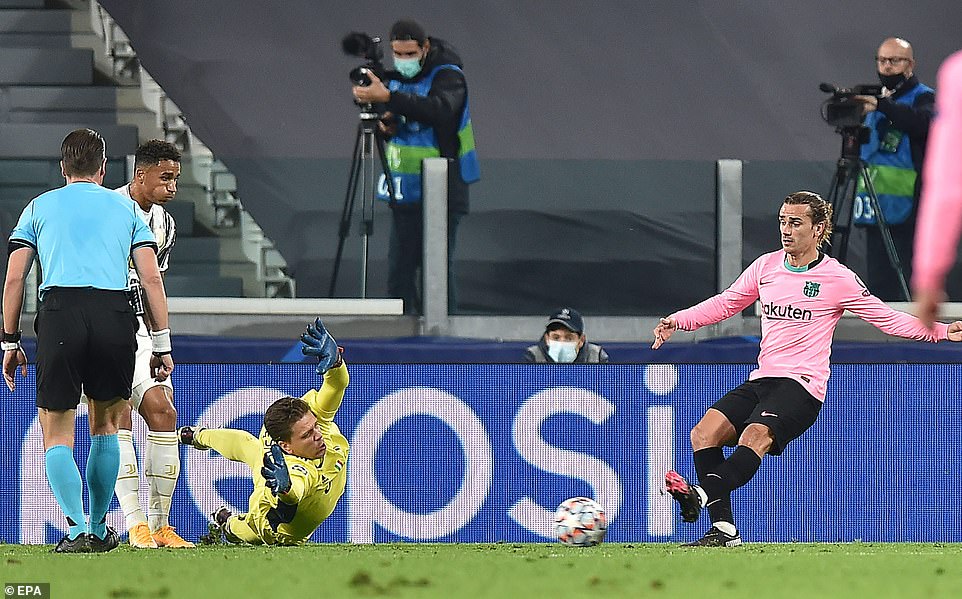 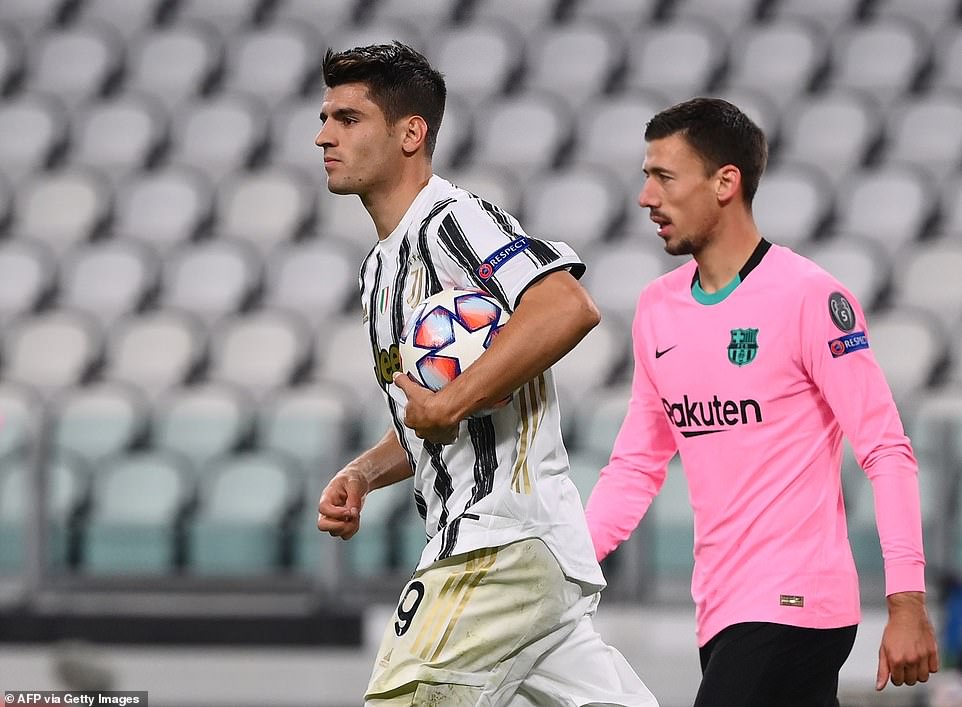 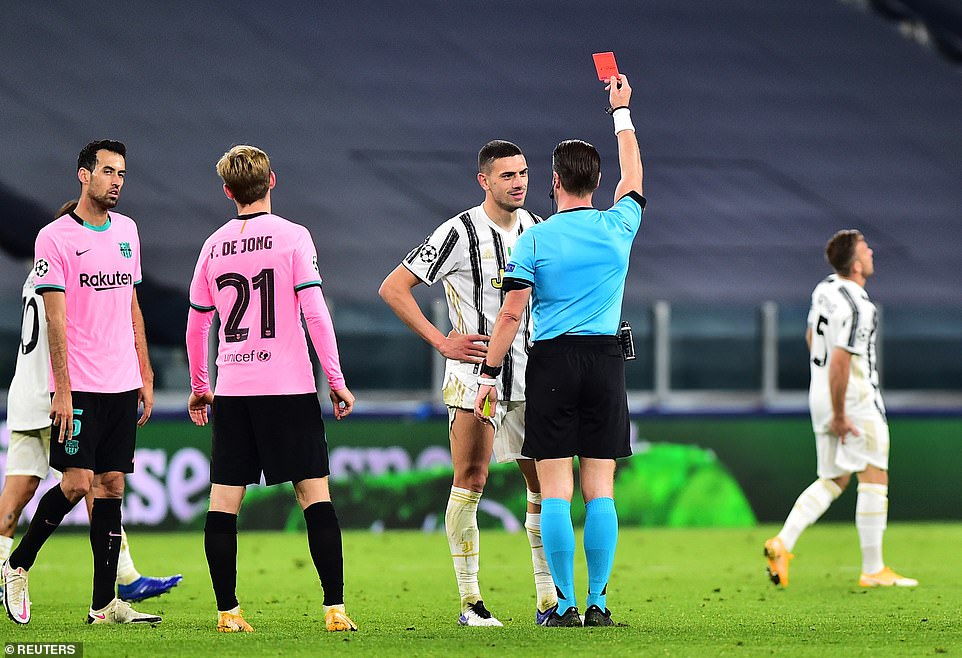 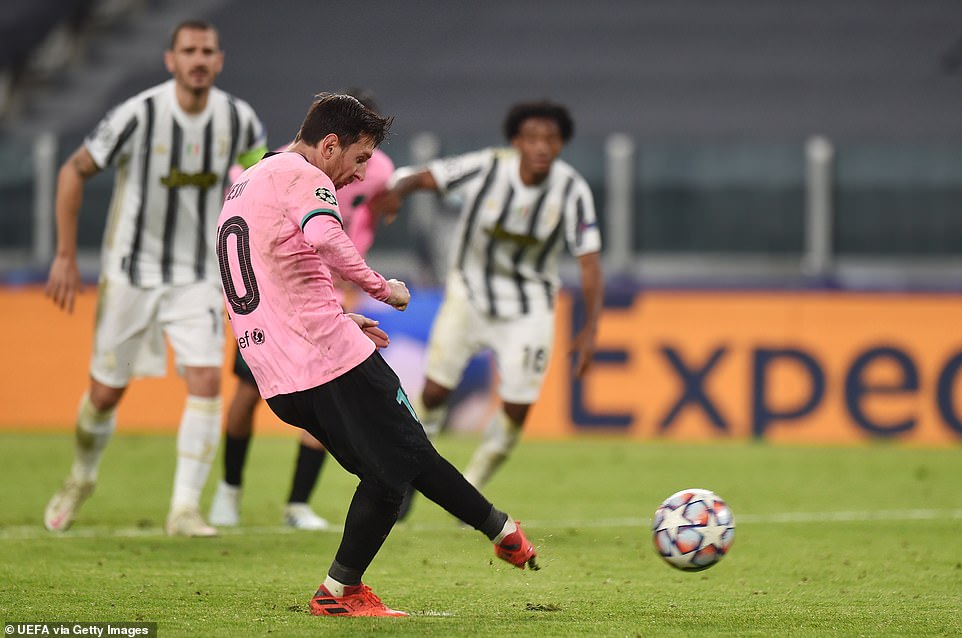 Lionel Messi put the final nail in the coffin for the Ronaldo-less Juventus, dispatching a spot kick in the final knockings 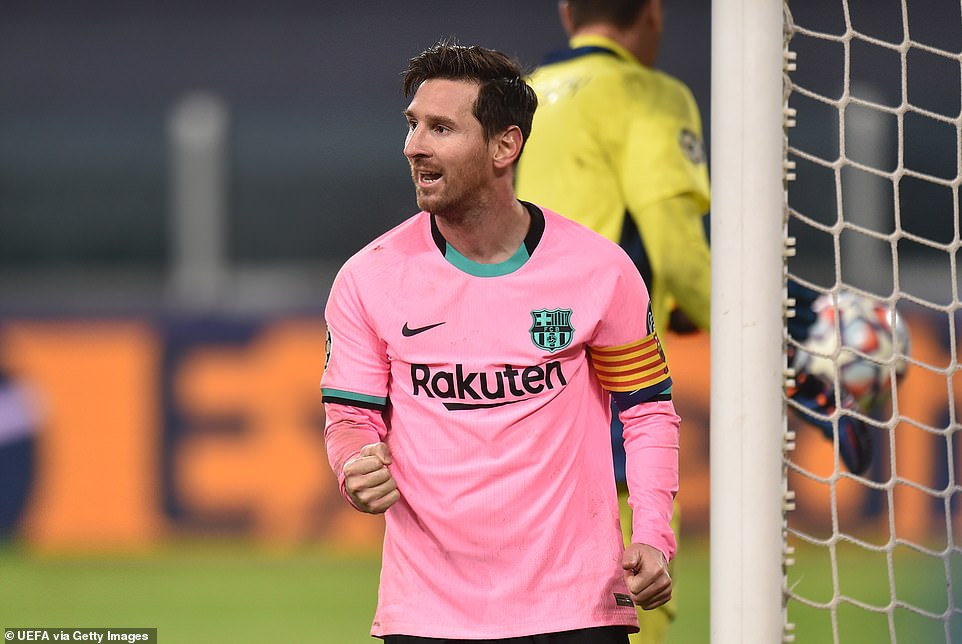 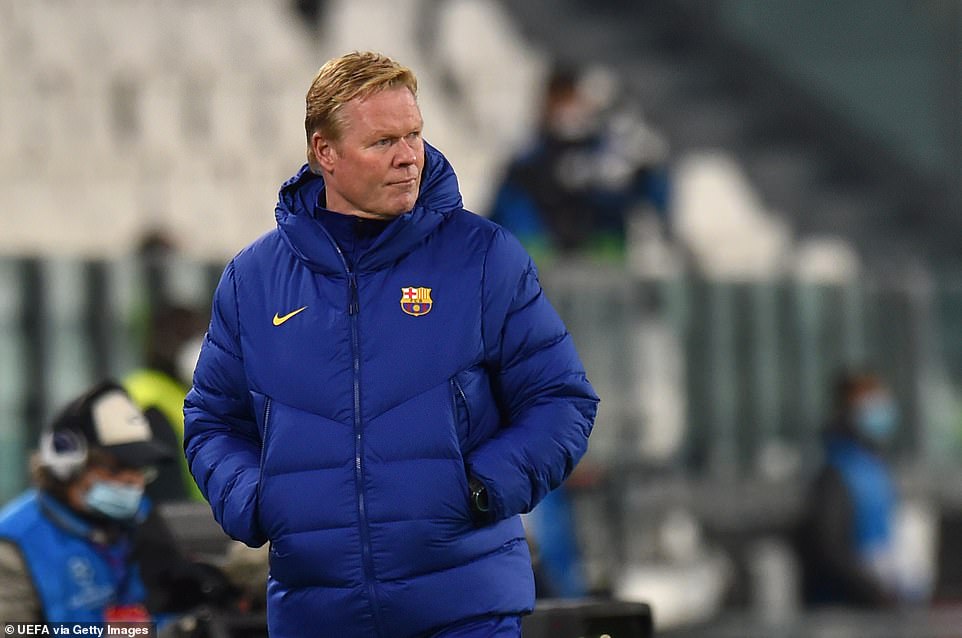 Wednesday’s win provides a huge confidence boost for Ronald Koeman, who has endured a mixed start to the campaign