Juventus leads with an exciting victory against Sweden’s Malmo in the Champions League.. Video 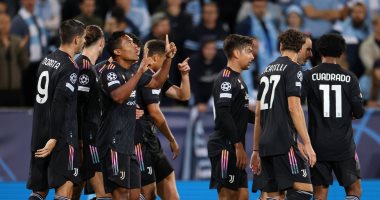 The Italian team, Juventus, achieved a precious victory at the expense of the Swedish Malmo 3-0 in the match that was held between them this evening, Tuesday, at the “Malmö Stadion”, as part of the matches of the first round of Group H of the European Champions League, in a match in which the Italian football representative is looking for a course correction. In the era of the new technical director Massimo Allegri.

Juve’s goals were scored by Alex Sandro and Paulo Dybala from the penalty spot and Alvaro Morata, in the 23rd, 45th and 45th minutes, respectively.

Juventus rose up, after it faltered at the beginning of the Italian league, as it did not achieve any victory so far after 3 rounds of the Calcio championship, after drawing in the opening meeting and defeat in two meetings, the last of which was the Napoli match, which ended with two goals against a goal.

With this result, Italian club Juventus topped the Group H standings with a goal difference from defending champion Chelsea, who defeated Russia’s Zenit with a clean goal.

It is scheduled to meet Juventus against Chelsea on September 29 at the “Allianz Stadium”, the stronghold of Juve, in the second round of the Champions League.

While the Swedish team Malmo will meet its Russian counterpart Zenit on September 29, also at the “Gazprom Arena”, in the second round of the European Champions League.

Twitter shares have weakened more than 6% since the beginning of September. Should I invest?

Away from its disease-carrying bites.. Snapshots of a mosquito described as "the most beautiful in the world"