Kamala Harris rallies Democrats ahead of the Georgia Senate run-off 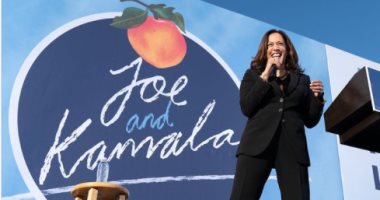 Kamala Harris, US Vice President Joe Biden, was keen to mobilize the largest number of Democrats to vote in the run-off in the Senate elections, scheduled for next Monday, as she posted a picture of her from one of her participation in the election conferences to ask the Americans to rally before the round, saying “Georgina no Wait, let’s turn the Senate. “

Kamala Harris, US Vice President Joe Biden, had asked Americans to wear a “muzzle” and get the Coronavirus vaccine when it became available. She confirmed in an interview with “Good Morning America” ​​on the ABC network that President Biden would ask All Americans wear a face mask.

Harris added, “Scientists and public health officials are telling us, there will be really great results if people wear out in public, hanging on social restrictions to slow the spread of the Coronavirus, that this is a moment where everyone sacrifices.”

In previous statements to the Vice President, she confirmed that the American elections witnessed the vote of more than 155 million American citizens and the will of the people finally prevailed. Democracy gives Americans the right to have their voices heard, vote count, and to elect the leaders of their nation.