Here is the harrowing video of the tornado that damaged more than 1,000 buildings in south-central Kansas after generated winds up to 165 mph and carving a path of destruction nearly 13 miles long.

The EF-3 tornado was filmed whipping through the Wichita suburb of Andover on Friday, sending cars and structures flying hundreds of feet into the air.

Andover Fire Chief Chad Russell said that at least 300 to 400 buildings were destroyed by the storm as part of a total of 1,074 buildings that were damaged.

The Weather Service said the tornado was on the ground for 21 minutes Friday evening. Drone footage from the area shows the tornado’s whirlwinds demolishing everything in its path, including the roof of residential homes.

Flying debris, especially from wooden houses, was also a dangerous hazard for the remainder of the early weekend. The small town’s community center’s roof was also partially destroyed and the YMCA building too. 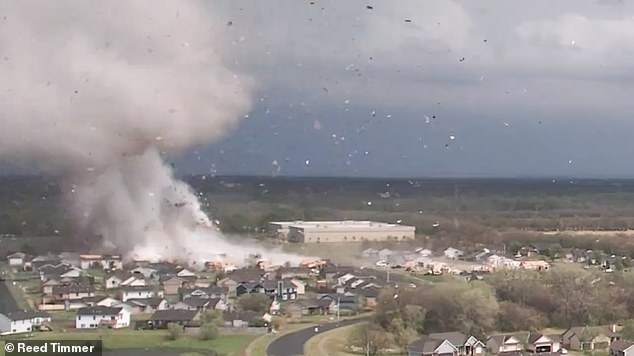 Incredible drone footage from Friday showed the EF-3 tornado destroying everything in its path, including parts of a community center and mostly wooden made homes in Andover, Kansas 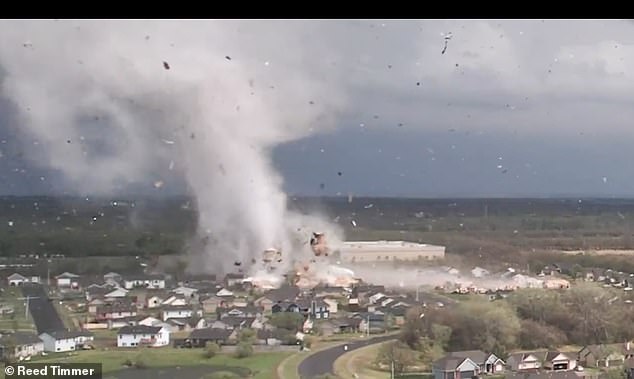 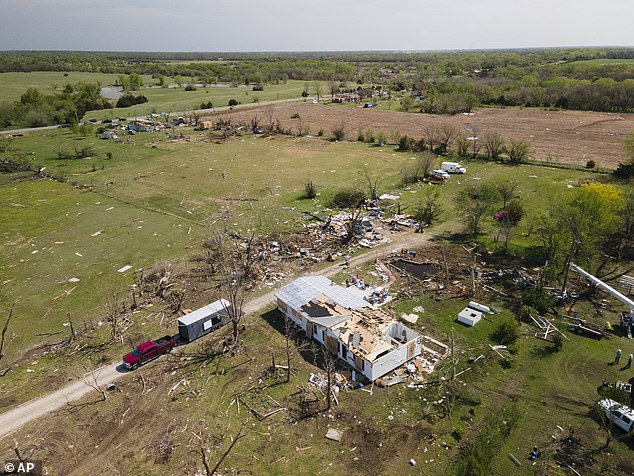 A destroyed house and other structures are seen in rural Sedgwick County, Kansas, on Sunday, May 1, 2022, two days after a tornado was reported in the area 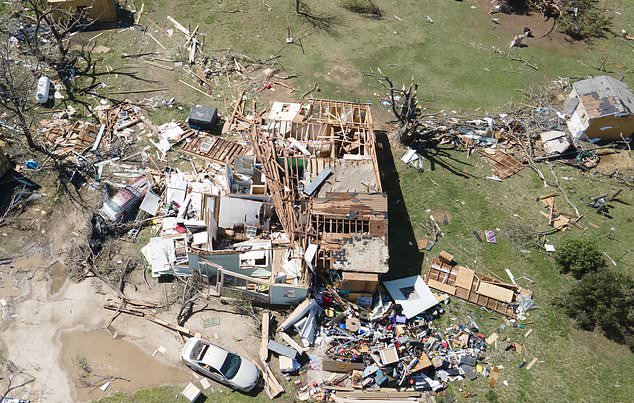 A home is destroyed from a possible tornado the next before near Andover, Kan., on Saturday, April 30, 2022 A suspected tornado that barreled through parts of Kansas has damaged multiple buildings, injured several people and left more than 6,500 people without power

Throughout Friday and Saturday, there have been more than a dozen reported tornadoes from Kansas and Illinois.

Four people, including two firefighters who were responding to a call in Andover, were injured during the storm but their injuries were minor.

Russell said it will take years for Andover to recover from this storm.

‘The city of Andover will be affected by this for years,’ he said. ‘We still have scars from 1991 (EF-5 tornado). I’m so thankful this tornado was not as bad as that, but we will literally be doing this for years.’ 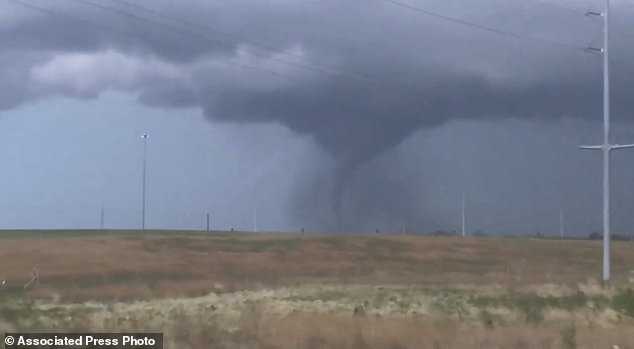 By Sunday, utility crews had restored power to nearly all of the more than 15,000 customers who lost power during the storm. Evergy said less than 1,000 people still lacked power in the Wichita area Sunday morning.

Andover mayor Brandon Whipple confirmed on Saturday that somewhere around 50 to 100 structures were damaged in the city by the tornado.

In addition to the storm damage, the Oklahoma State Patrol said three University of Oklahoma meteorology students were killed in a car crash about 85 miles north of Oklahoma City in Oklahoma Friday evening as they returned from storm chasing in Kansas. 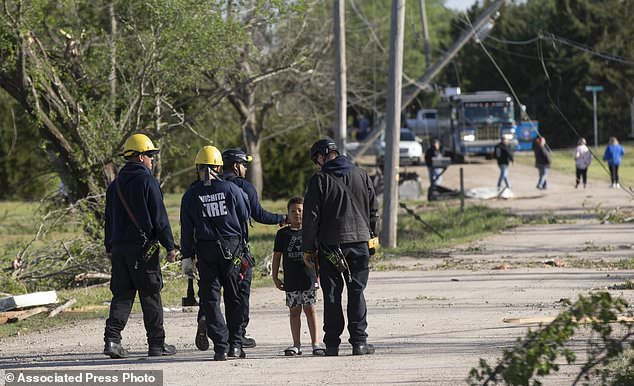 Wichita firefighters fist-bump 7-year-old Camden Oyewole while searching an area in Andover, Kan., on Saturday, April 30, 2022. A suspected tornado that barreled through parts of Kansas has damaged multiple buildings, injured several people and left more than 6,500 people without power. (Jaime Green /The Wichita Eagle via AP) 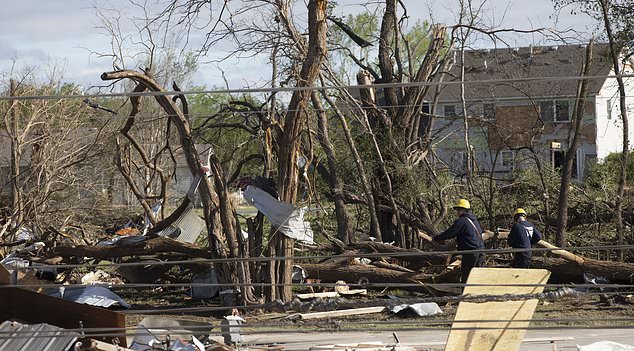 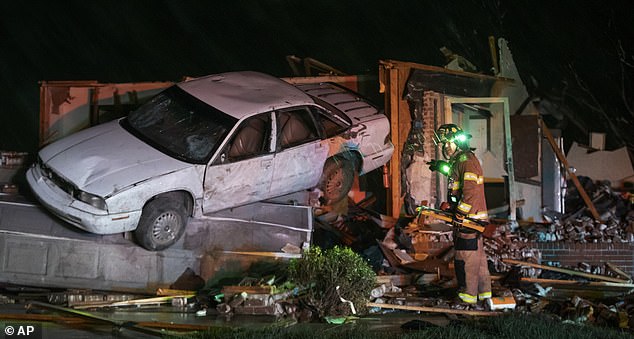 A Wichita firefighter searches a home in Andover which had a car land on top of it following the powerful tornado that , Kan., ripped through the area on Friday evening 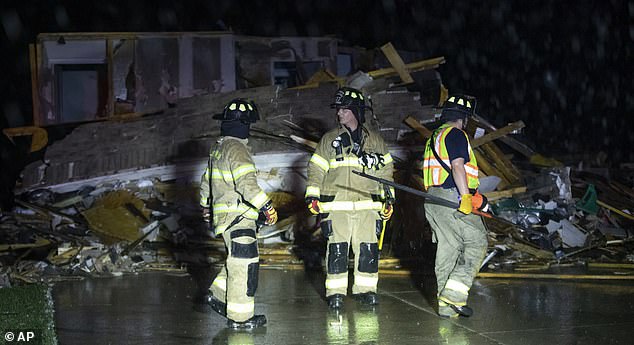 ‘We are still really concerned about those areas in the fire district that we have not…searched yet,’ Andover Fire Chief Chad Russell said on Saturday as firefighters were pictured searching through the remains of a home in Andover 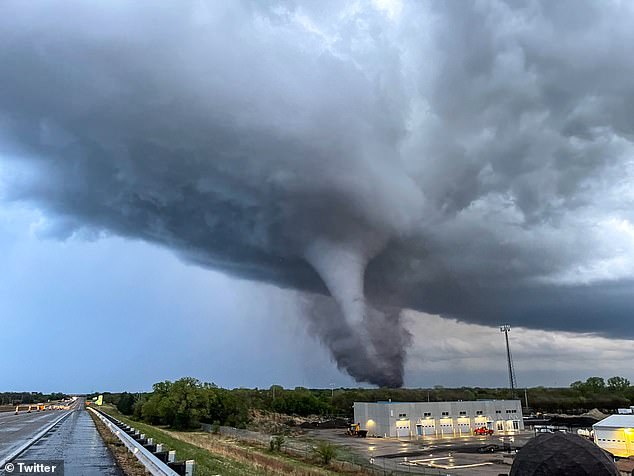 A massive tornado crashed down in Andover, Kansas on Friday evening as counties throughout the state issued warnings 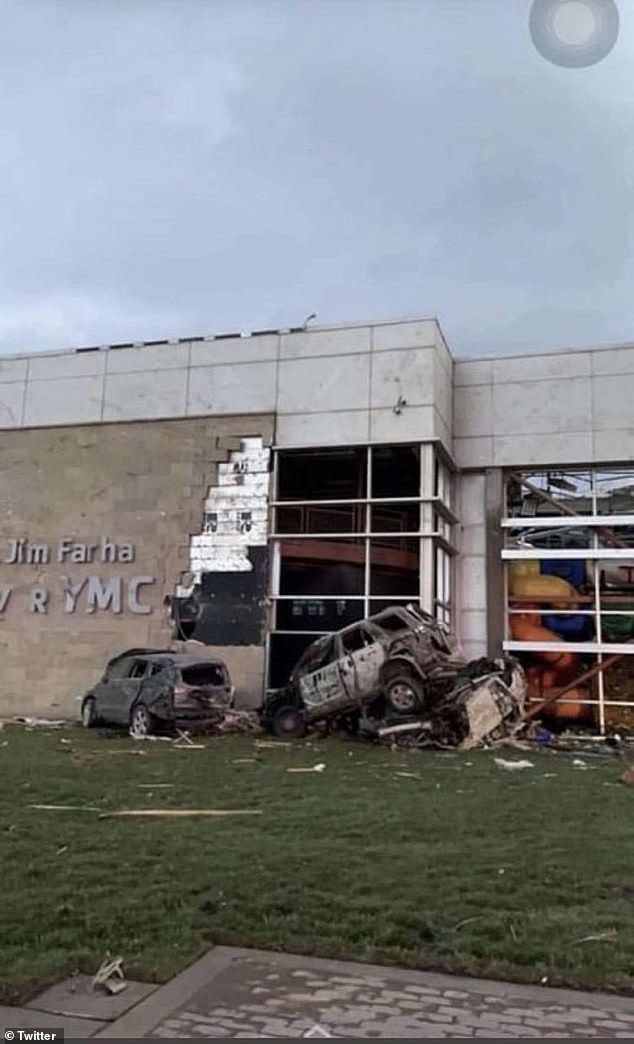 Three vehicles were tossed in front of the Andover YMCA building, which was left devastated by the tornado 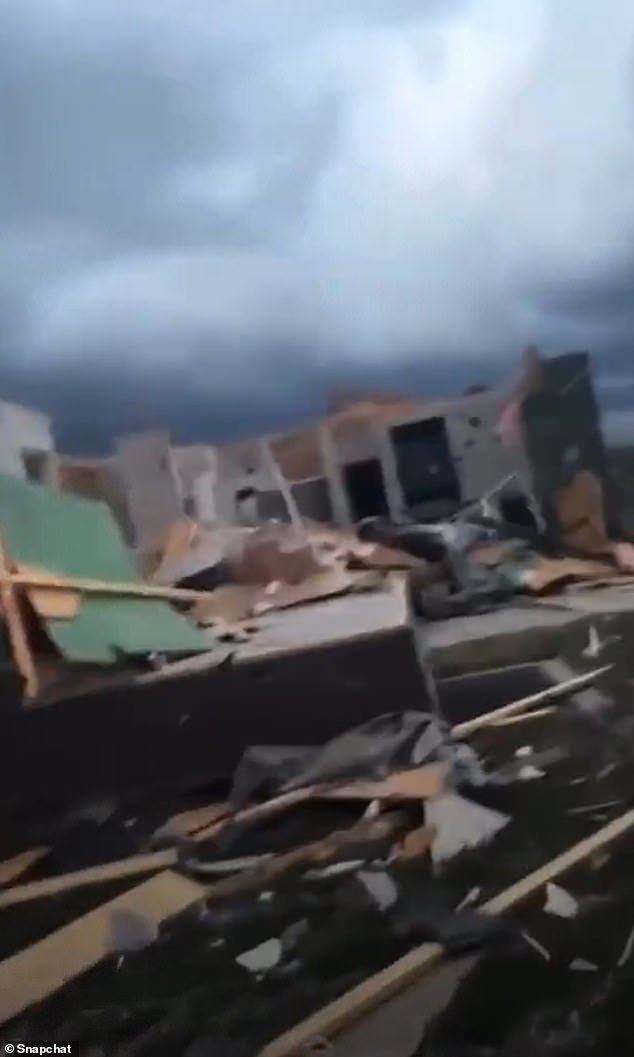 Homes in the tornado’s path were heavily damaged, with others completely leveled by the twister 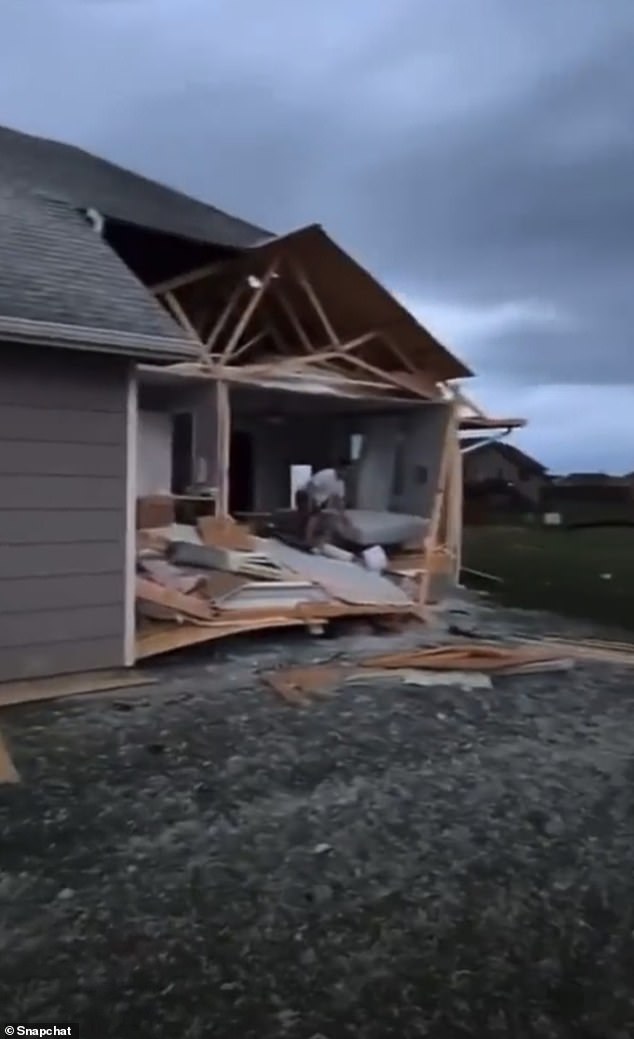 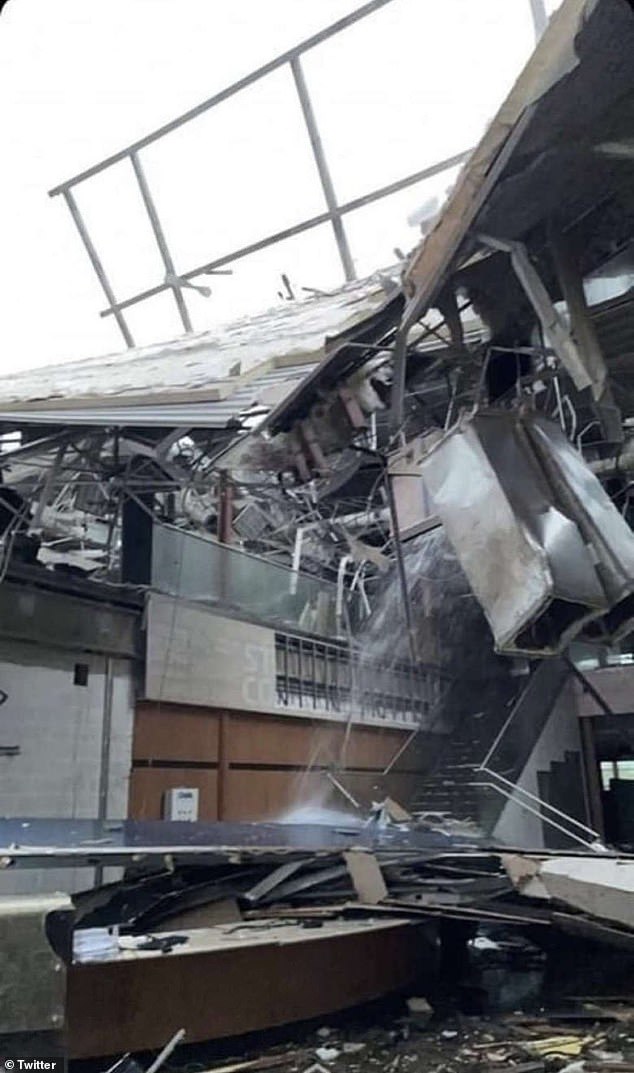 Storms are expected to develop in eastern New Mexico and Colorado, before moving eastward into Texas and Oklahoma, the Weather Channel reported.

Storm chaser Reed Timmer captured shocking footage of the tornado from his car as it moved quickly through a residential area in Andover, pulling in an intense amount of debris with it it.

As it intensifies, he panics and yells to someone to ‘go to the apartment complex!’

Other storm chasers and local residents have also captured pictures and video of the storm and aftermath, with one man filming the moment the tornado hit power lines, lighting up the sky in violent flashes of light.

Moments later, the storm chaser reaches the area the tornado passed through, revealing rows of homes devastated by the twister.

The Greater Wichita YMCA said that the Andover branch would be closed due to the damages but that none of the employees were hurt in the storm.

‘The Andover YMCA suffered significant damage as a result of the storm that hit the Andover area this evening. We are thankful that all of the staff and members that took shelter at the branch at the time of the storm, were not injured.’

A Snapchat user with the handle Aaryn also captured video of the aftermath in his neighborhood as neighbors came out to check up on each other.

The video shows the houses on the block heavily damaged, with some completely leveled as Aaryn can only say, ‘Oh my god. This whole cul de sac is gone.’

Counties across the state issued tornado warnings on Saturday, with twisters appearing and dissipating throughout Kansas, including Wichita, Sedgwick and Butler.

Andover, which is located in Wichita County, appeared to be the hardest hit area. Neighboring cities have dispatched emergency workers to assist Andover. 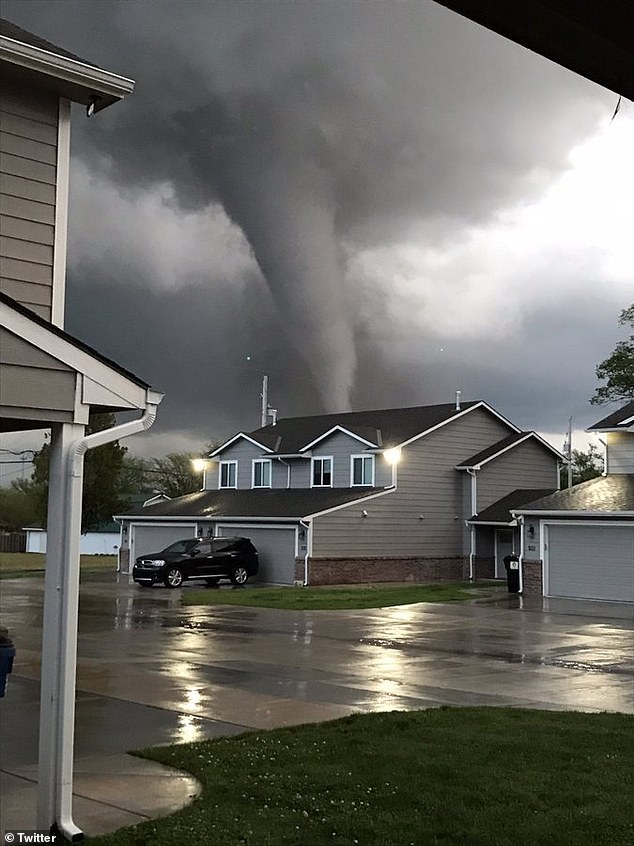 A huge tornado was snapped looming menacingly over homes in Andover, Kansas on Friday evening. At least 100 structures were destroyed by the twister, although there have not yet been reports of any injuries 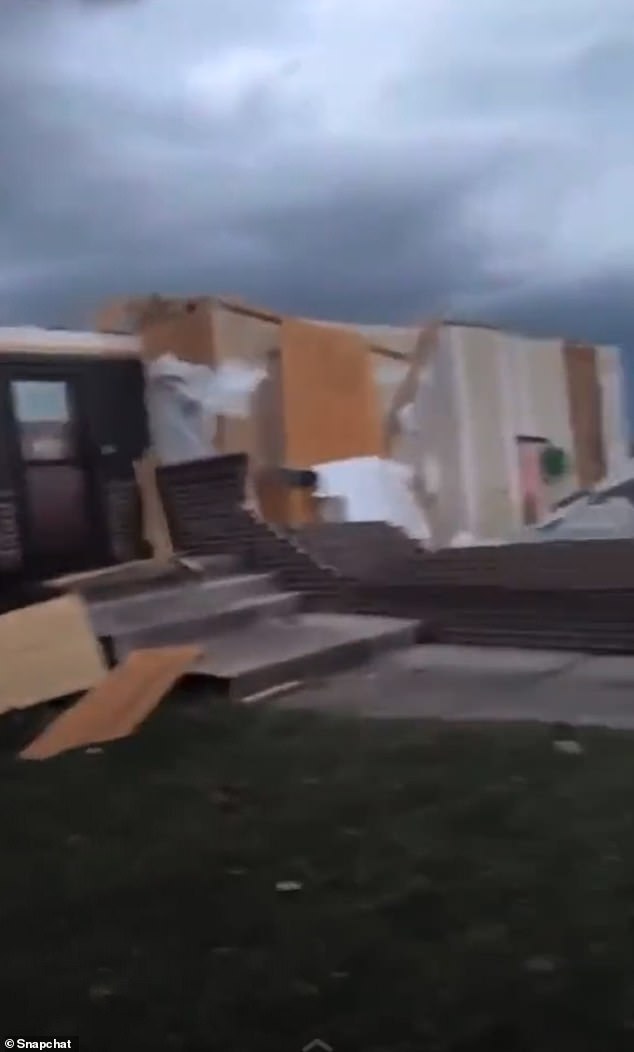 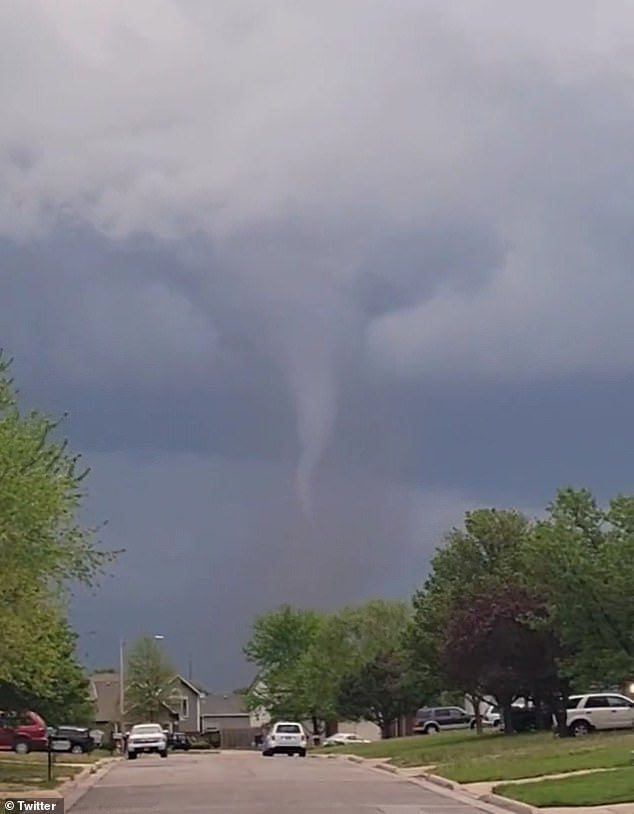 Tornadoes were spotted throughout Kansas with the Andover storm traveling through Wichita, Sedgwick and Butler

Friday’s storm comes days after the 31st anniversary of the deadly F5 tornado outbreak that struck Oklahoma and Kansas in 1991.

The deadly storms lasted two days and killed a total of 21 people, 17 of which were in Andover alone.

NBA PlayOffs 2022: And that’s how Curry stopped talking to Klay Thompson, he ruined the basket of the year!