Kate Middleton wrapped up in a camel coat and tartan scarf as she joined Prince William on a visit to Orkney today.

The Duke and Duchess of Cambridge were on hand to officially open the Balfour Hospital, in Kirkwall, on the second day of joint engagements in Scotland.

Kate, 39, recycled a £349 Massimo Dutti coat and debuted new wide-leg trousers for the engagement, which saw the couple speak to NHS staff about their pandemic experiences.

In a nod to her Scottish title, the Countess of Strathearn, Kate finished the outfit with a scarf in the Strathearn tartan from e-commerce site ScotWeb.

William, 38, and Kate travelled to Orkney from the Palace of Holyroodhouse – the Queen’s official Scotland residence, in Edinburgh – where they are staying while on a week-long tour of Scotland. The visit is part of a broader royal charm offensive to help persuade Scotland to resist the demands of nationalists for independence. 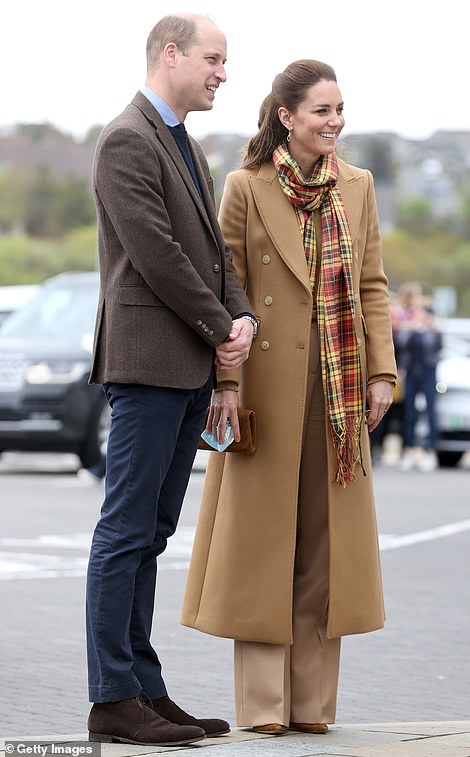 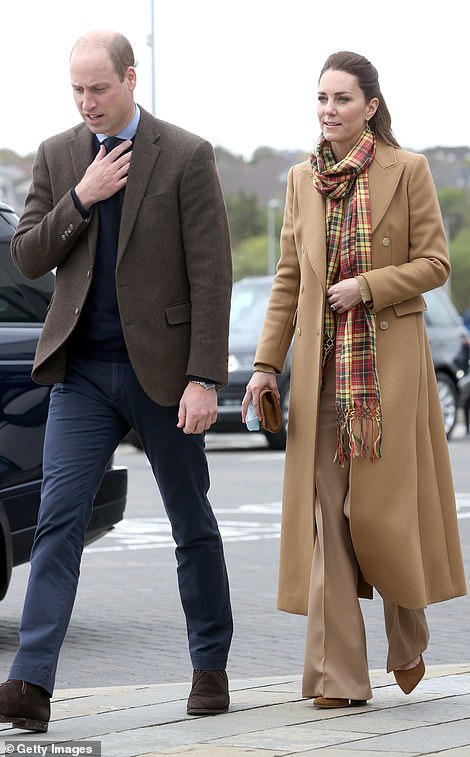 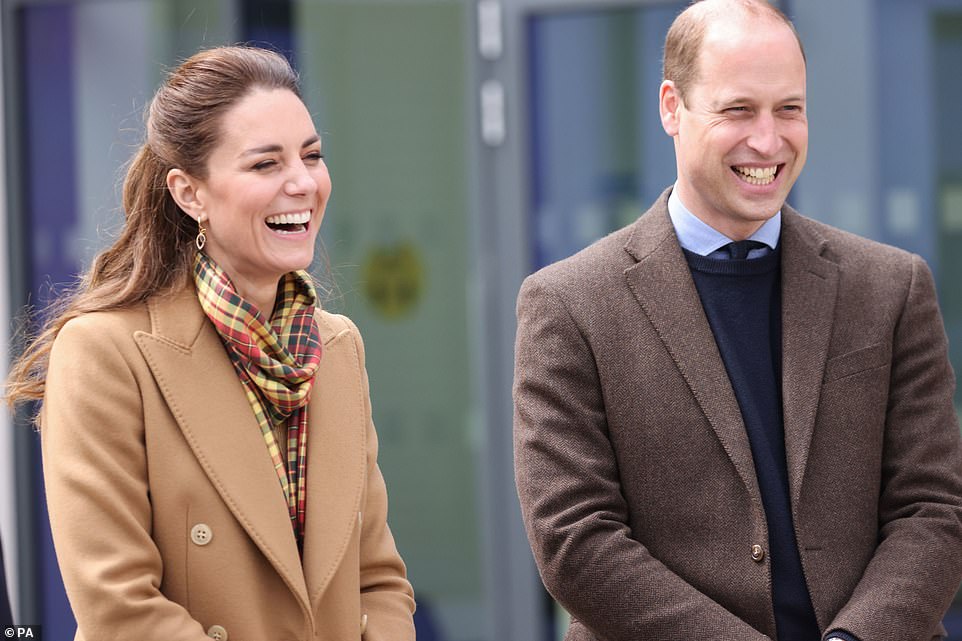 Beaming! The Duke and Duchess of Cambridge appeared in excellent spirits as the opened a hospital in Orkney today 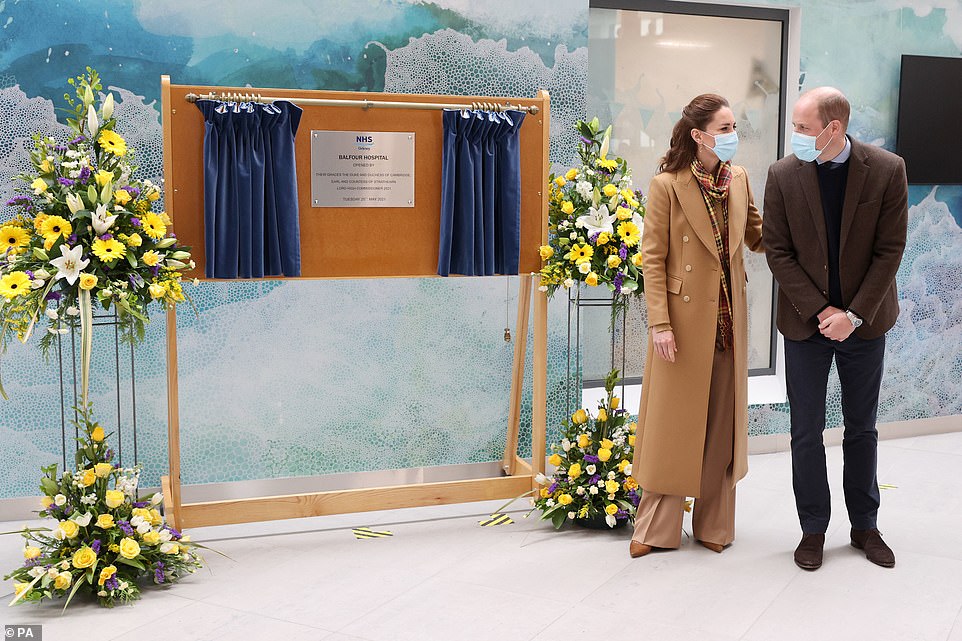 The Duke and Duchess of Cambridge, styled as the Earl and Countess of Strathearn, unveiled a plaque at Balfour Hospital 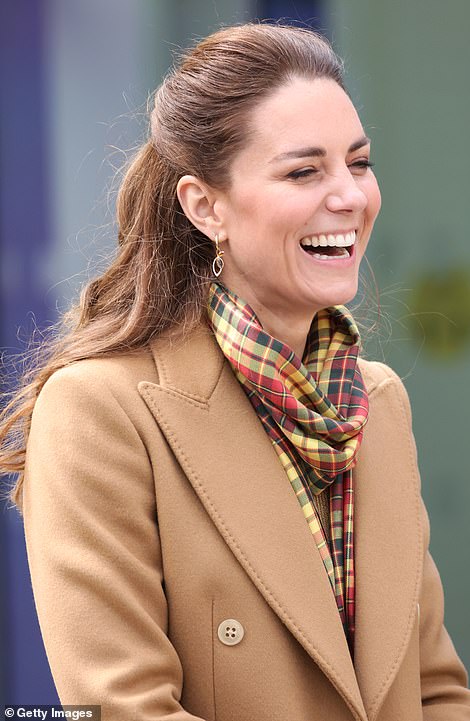 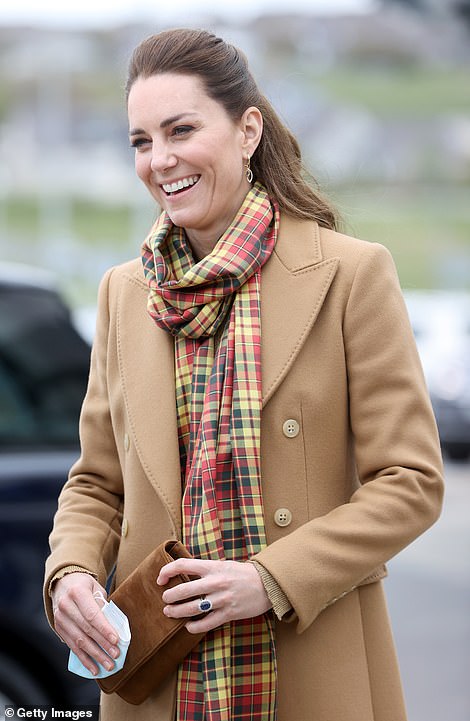 The Duchess of Cambridge, 39, appeared to be all smiles as she arrived for her first engagement of the day in a caramel coat and matching trousers 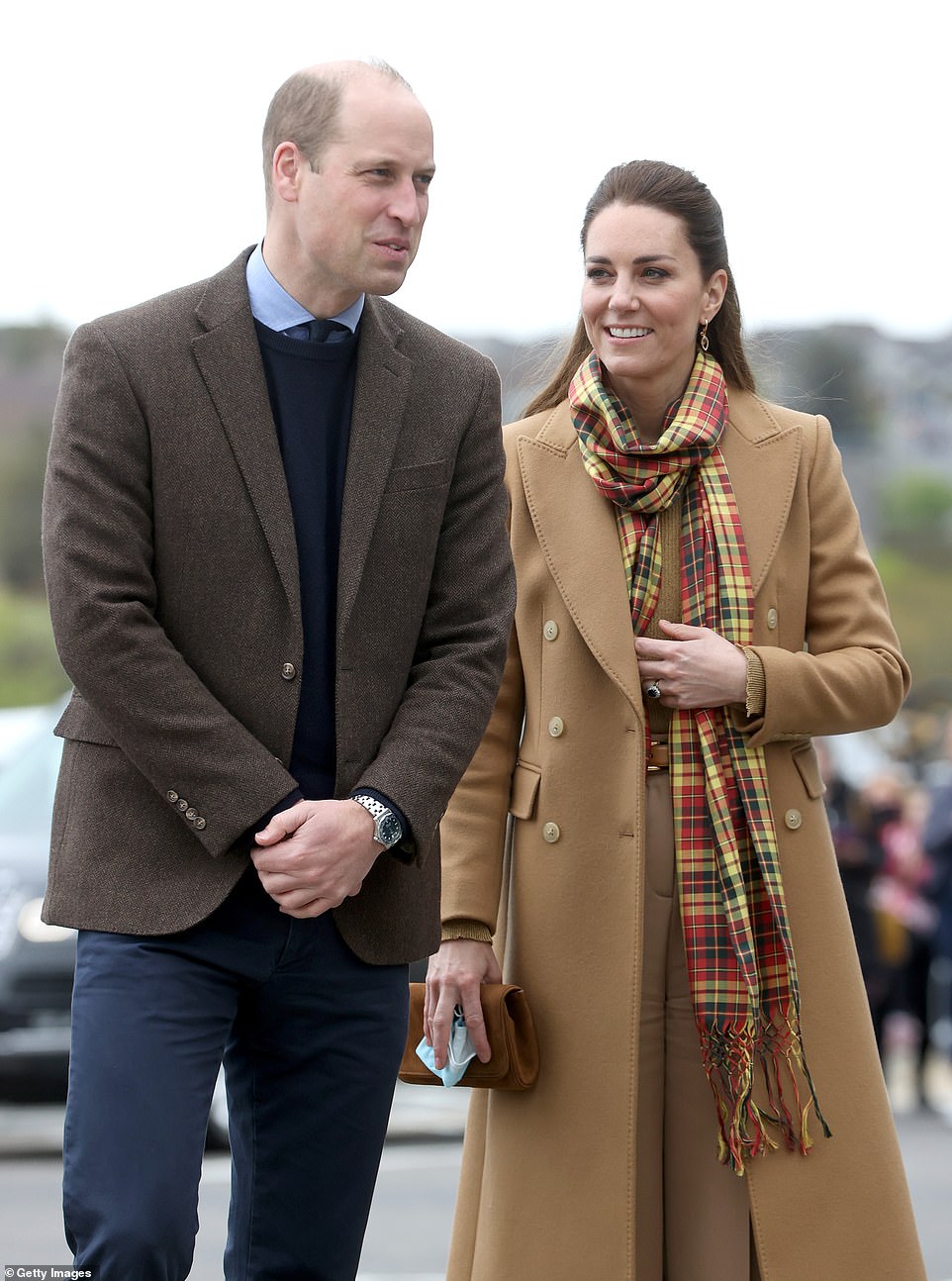 Kate recycled a £349 Massimo Dutti coat and wide-leg trousers for the engagement. Kate also wore a scarf in the Strathearn Tartan, in a nod to her Scottish title, the Countess of Strathearn

The Strathearn tartan takes its name from Strathearn, a region of southern Perthshire.

Evidence points towards the Strathearn tartan being a design by the famous weaving firm Wm. Wilson & Son of Bannockburn. The exact date of its creation is unknown but it dates back to at least 1820.

Some historians believe it was worn by Queen Victoria’s father the Duke of Kent, who was Colonel of the Royal Scots (First Royals) 1801-1821.

By the early 1900s it was regarded as a ‘District Tartan’, the name given to tartans representing geographical areas, rather than clans.

After decades out of favour, the Strathearn tartan has enjoyed a resurgance in popularity thanks to its association with the Duke and Duchess of Cambridge, who are styled as the Earl and Countess of Strathearn in Scotland.

The Balfour Hospital opened its doors in 2019 and replaced the old hospital, which had served the community for 90 years.

The new facility has enabled the repatriation of many NHS services from the Scottish mainland, allowing Orkney’s population to receive most of their healthcare at home.

The new building’s circular design is based on the 5000-year-old Neolithic settlement, Skara Brae, making it a unique reflection of the local landscape in which many historical sites are circles.

During the visit, the Duke and Duchess met a number of NHS staff to hear more about their experiences over the past year, before formally opening the hospital.

Prince William has been in Scotland since Friday and Kate Middleton arrived yesterday. They will return to London on Thursday.

The couple kicked off their joint engagements yesterday with a visit to Turning Point Scotland, a social care charity in Coatbridge, North Lanarkshire.

They learned about the support the organisation provides to those facing homelessness, mental health issues and substance abuse.

Later in the afternoon they visited the pioneering Scottish Violence Reduction Unit (SVRU), and learned about the support it provides to community organisations across the country.

In the evening they were joined in the café kitchen at the Palace of Holyroodhouse, where they are staying, by Sikh Sanjog to prepare meals which will be distributed to vulnerable families across the Edinburgh community.

Kate sported a £59.99 Zara blazer and pleated midi skirt by Hope Fashion in the colour of the Scottish flag, which she accessorised with a pair of £1,395 ‘flora drop’ gold earrings from Scottish brand Hamilton & Inches, which has held a Royal Warrant as silversmiths to Her Majesty the Queen for more than 120 years.

The couple will also host a special drive-in screening of Disney’s Cruella for NHS staff, and will join young carers from the local Fife area for a session of land yachting on the beach. 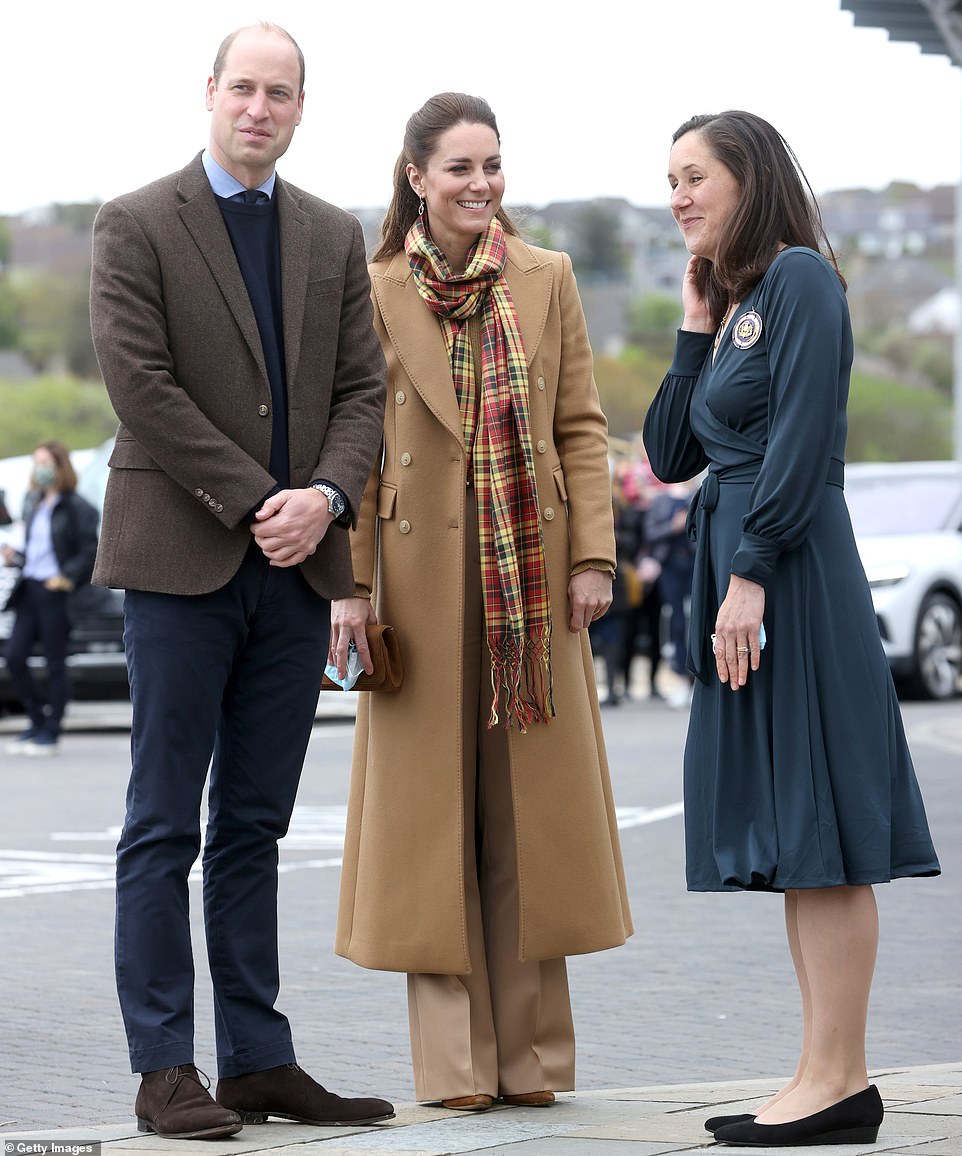 The Duke and Duchess of Cambridge formally opened the hospital, which first opened its doors in 2019 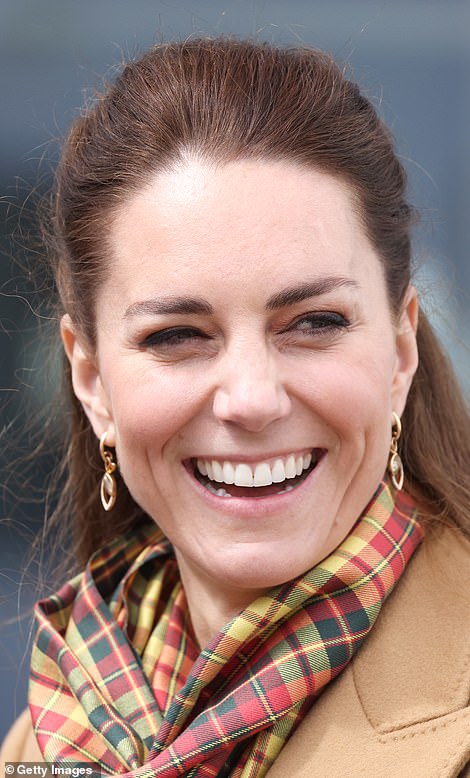 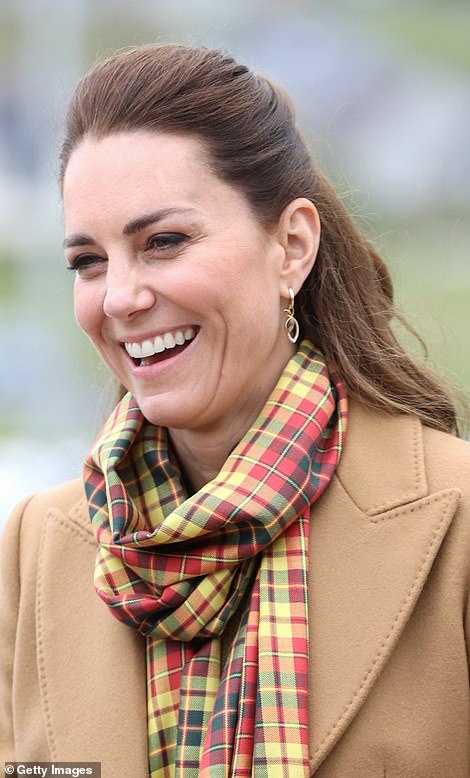 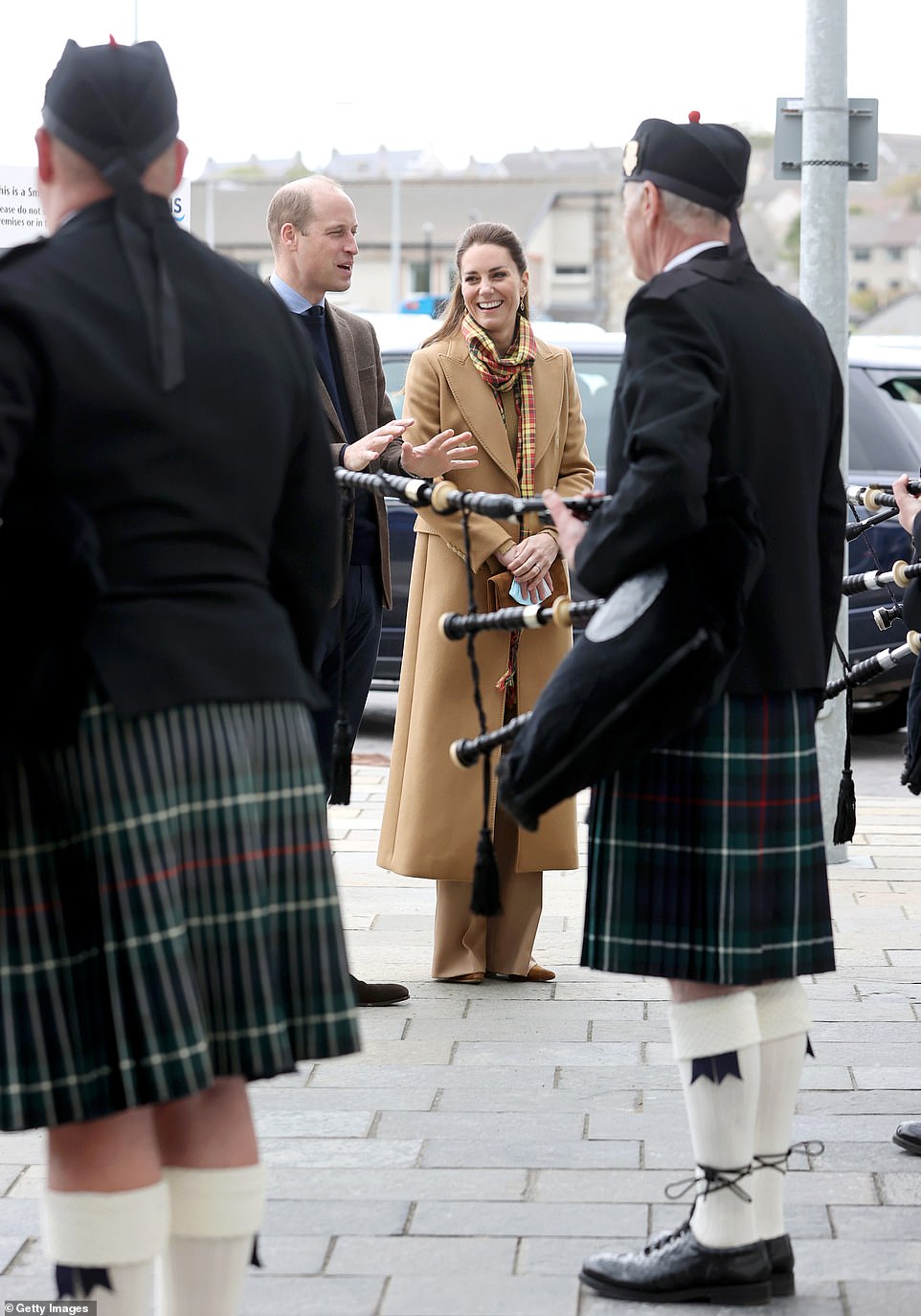 Their visit to Scotland is understood to be part of a wider strategy to emphasise the ‘cultural bonds’ between Scotland and the rest of the union. 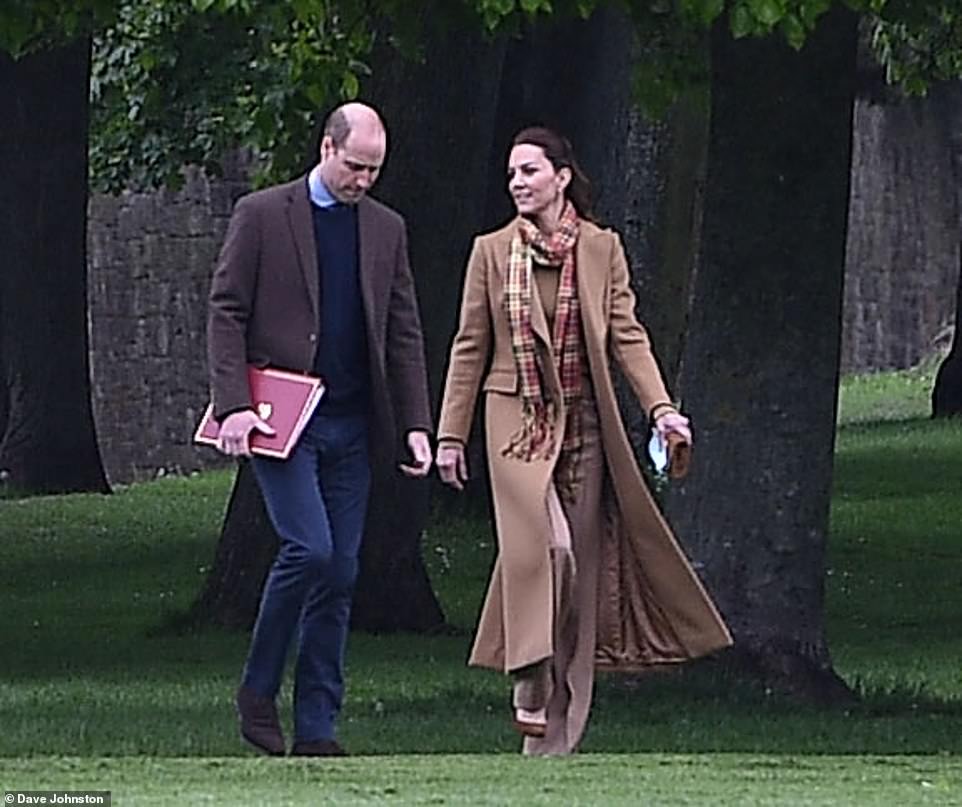 Kate, 39, looked chic in a camel coat and wide-leg trousers as she boarded the helicopter in the grounds of the Palace of Holyroodhouse, the Queen’s official residence 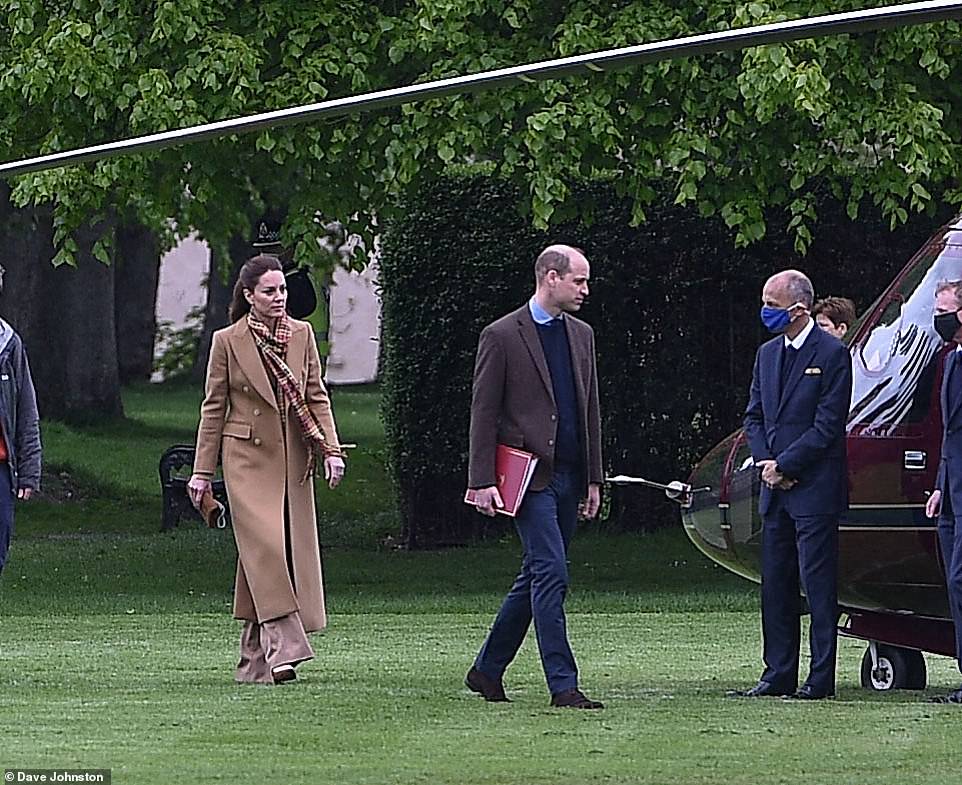 The couple are on their way to Orkney, off the northeast coast of Scotland, where they will carry out a series of engagements 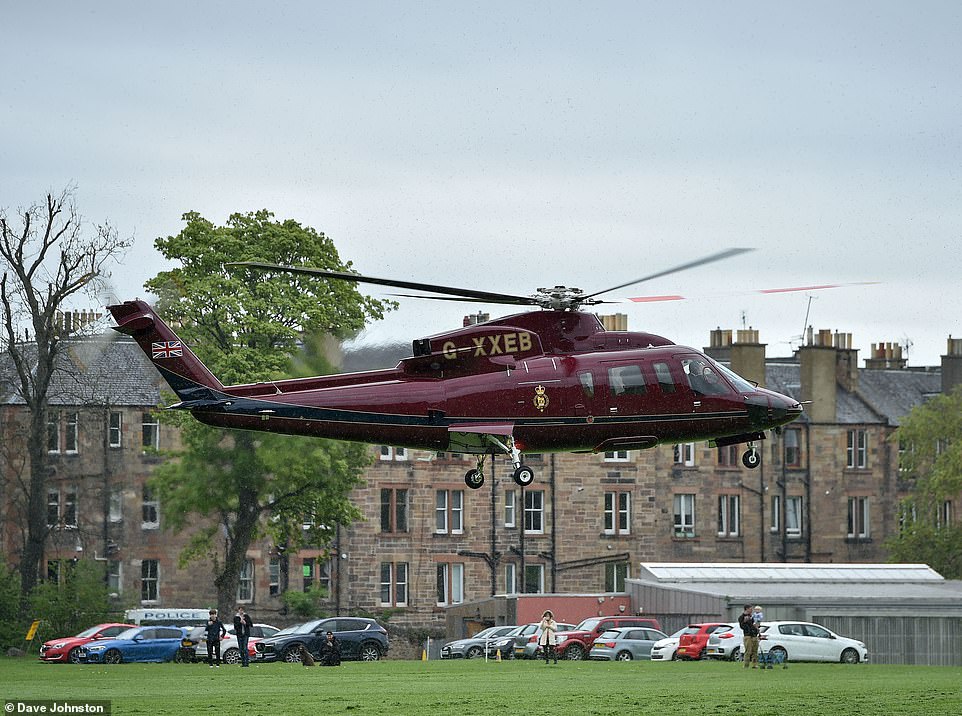 The Prince of Wales and Duchess of Cornwall will also be involved but the decision to send the Cambridges ahead was a clear part of the PR strategy. A source told the Mail On Sunday: ‘It’s about opening a dialogue – listening and talking. All members of the Royal Family have a strong affinity with Scotland.’ 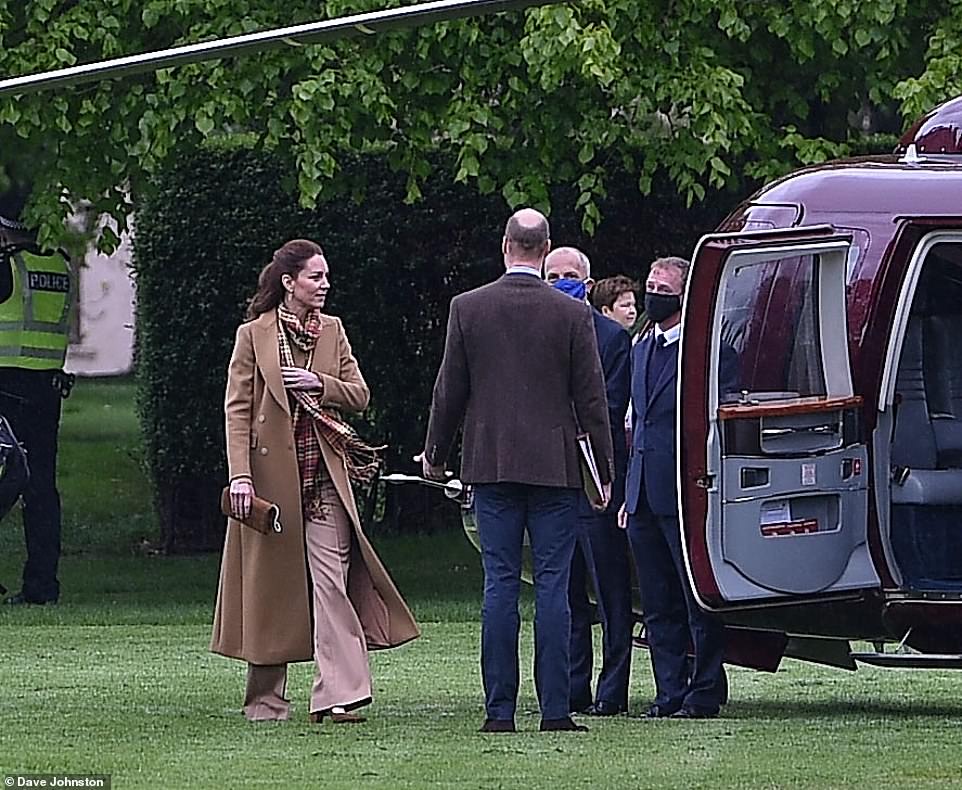 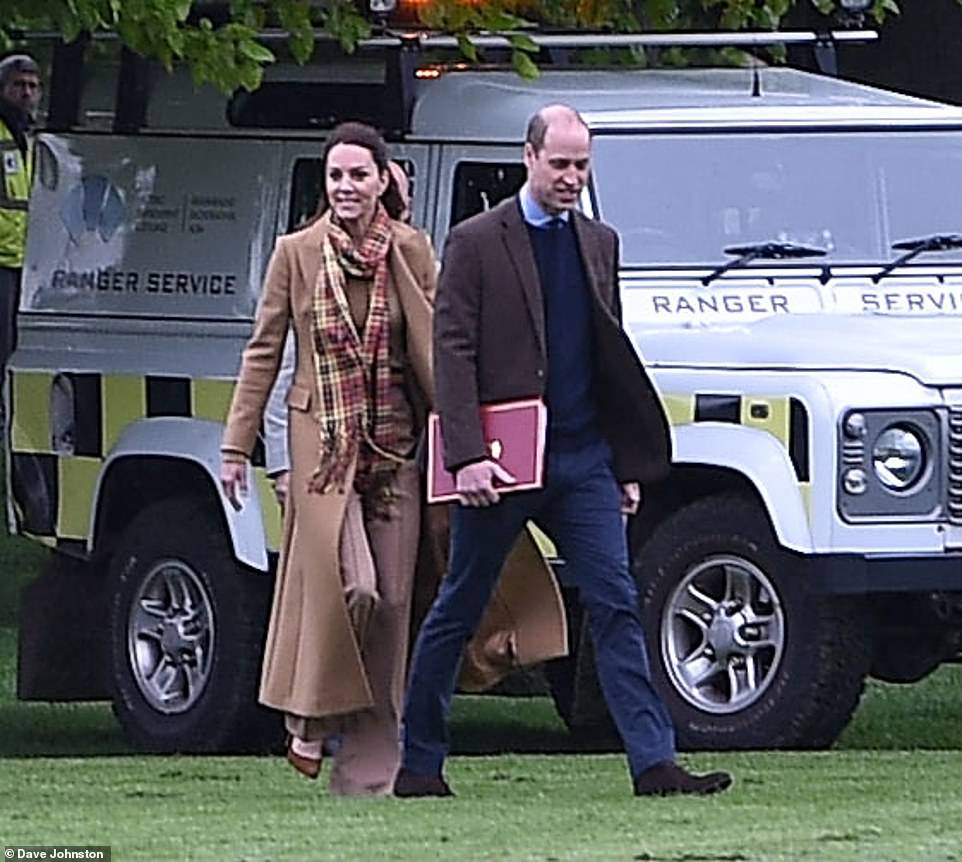 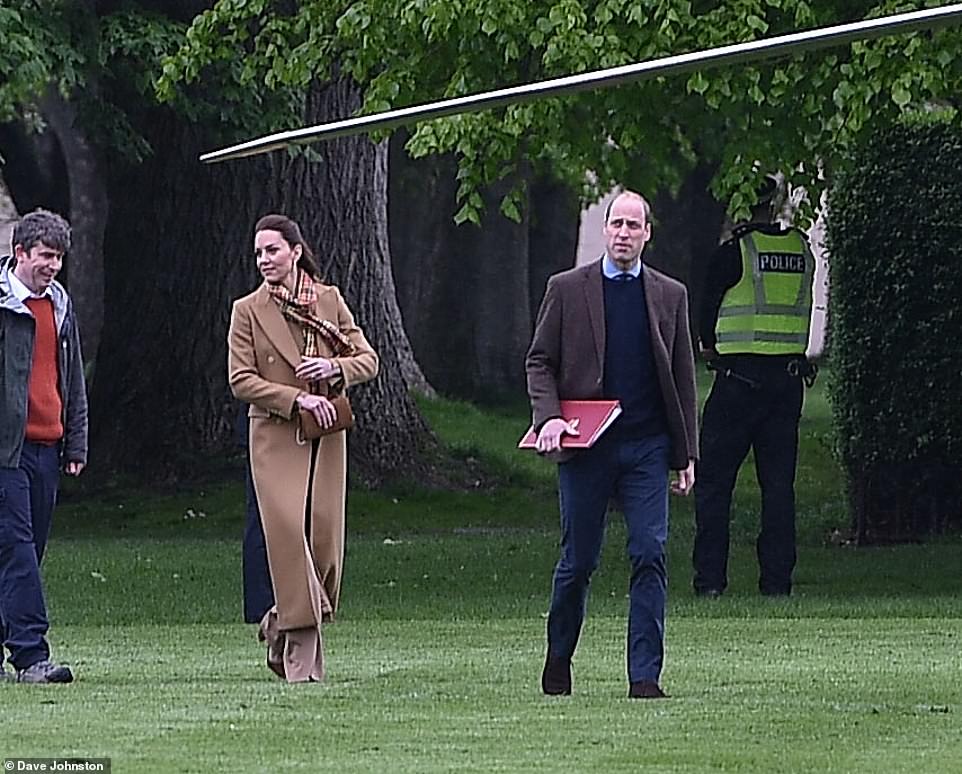 Lego World Map set boasts more than 11,000 pieces – the most in a set ever