The Duchess of Cambridge showcased her signature flair for diplomatic dressing as she joined husband Prince William for the second leg of his Scottish royal tour.

Kate, 39, sported a £59.99 Zara blazer and pleated midi skirt by Hope Fashion in the colour of the Scottish flag for a visit to Turning Point Scotland, a social care charity in Coatbridge, North Lanarkshire. She also sported a pair of £1,395 ‘flora drop’ gold earrings from Scottish brand Hamilton & Inches, which has held a Royal Warrant as silversmiths to Her Majesty the Queen for more than 120 years.

The couple learned about the support the organisation provides to those facing homelessness, mental health issues and substance abuse. The visit is part of a royal charm offensive to help persuade Scotland to resist the demands of nationalists for independence.

It received its effective launch over the weekend when William gave a deeply personal speech in which he described the ‘special place’ that Scotland had in his heart, a country which he said held both some of his ‘happiest memories’ and his ‘saddest’.

It was at Balmoral where he learned of the death of his mother Diana, in 1997. And it was at St Andrews where he met and fell in love with Kate Middleton.

William, 38, arrived in Scotland on Friday and will be joined by Kate on the remainder of his engagements on the week-long tour to win hearts and minds. The couple will return to London on Thursday. 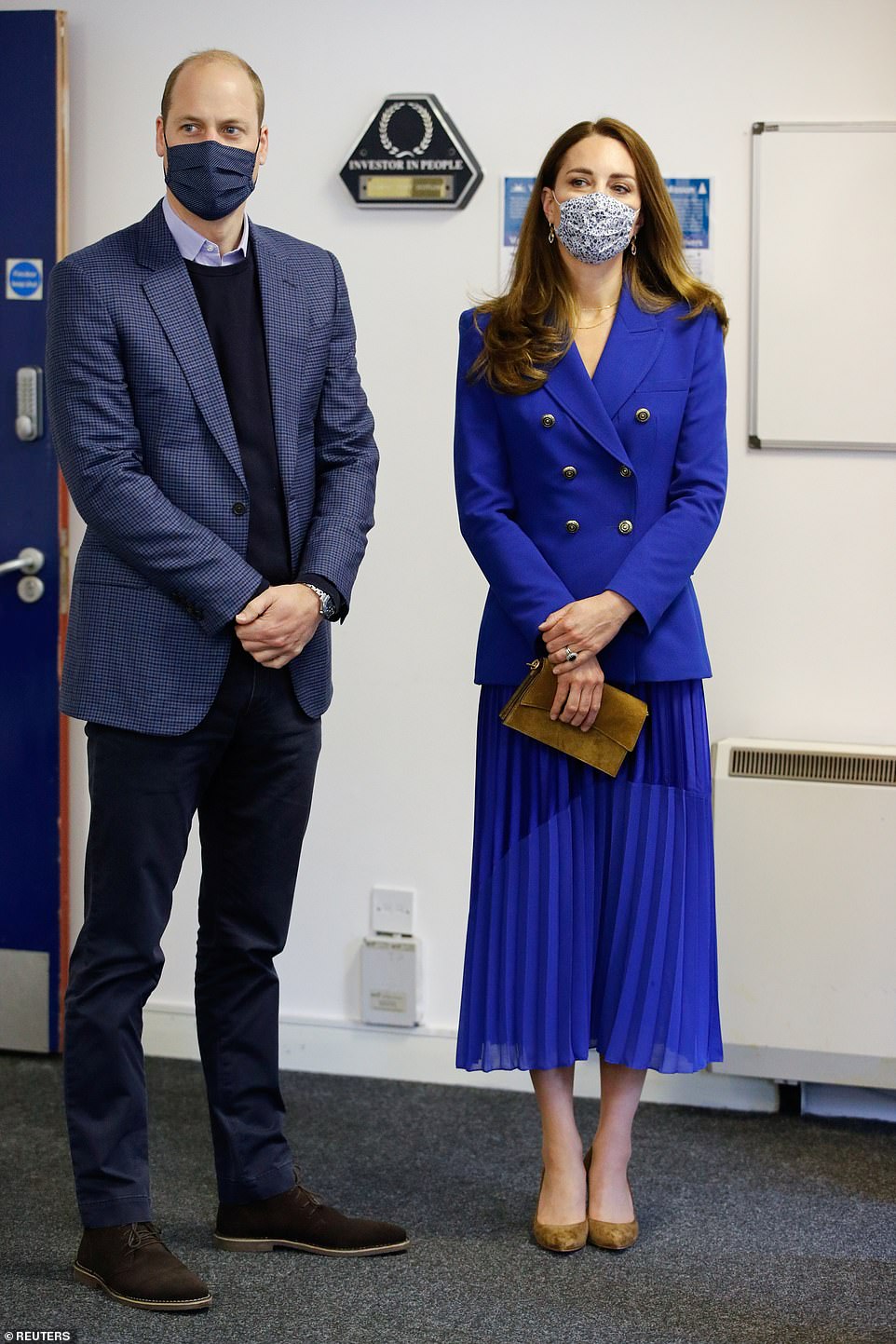 Royals on tour! The Duchess of Cambridge has joined William in Scotland. Kate sported a £59.99 Zara blazer and pleated midi skirt in the colour of the Scottish flag for a visit to Turning Point Scotland, a social care charity in Coatbridge 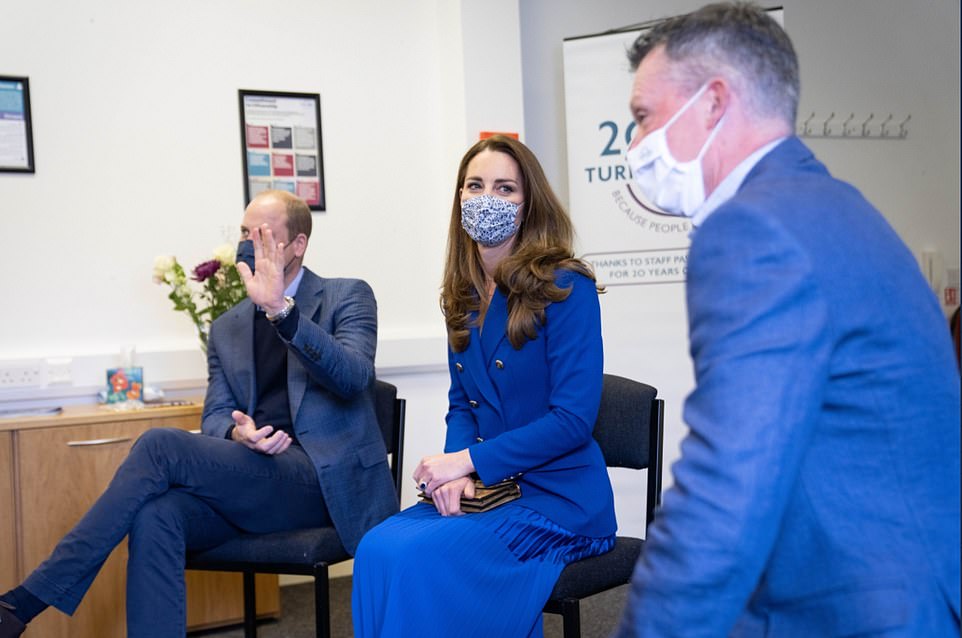 Royal charm offensive: The visit is part of a royal strategy to help persuade Scotland to resist the demands of nationalists for independence. Pictured, the Duke and Duchess of Cambridge at Turning Point Scotland today 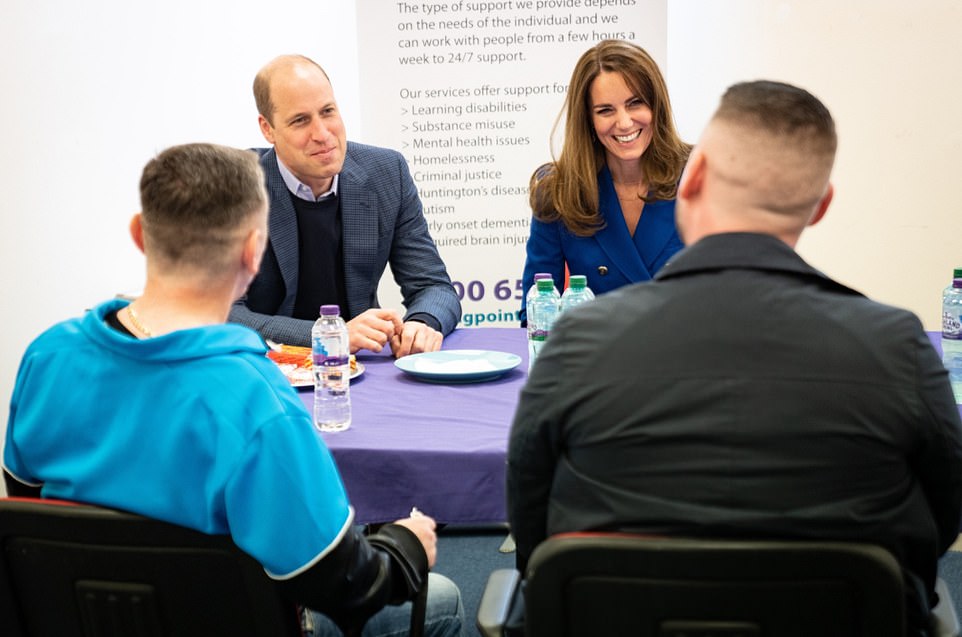 Beaming: The Duke and Duchess of Cambridge smiled as they learned more about the services offered by the charity 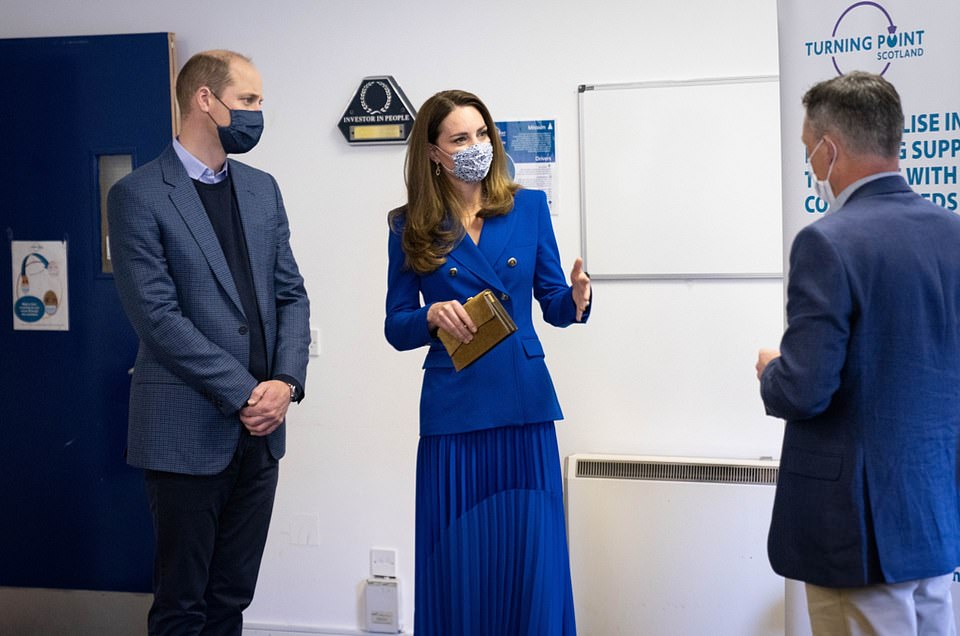 True blue! The Duchess of Cambridge wore a skirt and jacket in the blue of the Scottish flag for the visit today

Turnaround delivers targeted programmes to address the complex and interrelated issues of offending behaviours and problematic use of alcohol and other drugs, which often result in patterns of re-offending.

During their visit, The Duke and Duchess joined a video call with staff and service users from TPS’ Glasgow Overdose Response Team (GORT), to hear how the service works to reduce drug related deaths by providing real-time crisis support for people who have experienced a near fatal overdose.

The couple, who are staying at the Palace of Holyroodhouse, will also host a special drive-in screening of Disney’s Cruella for NHS staff, and will join young carers from the local Fife area for a session of land yachting on the beach. The trip will also include the couple’s first official visit to Orkney.

Pressure for a second independence referendum has increased after the Scottish National Party narrowly missed winning a majority in the Scottish Parliament. Public opinion about independence is on a knife edge according to polls and First Minister Nicola Sturgeon wants a vote before the end of 2023. 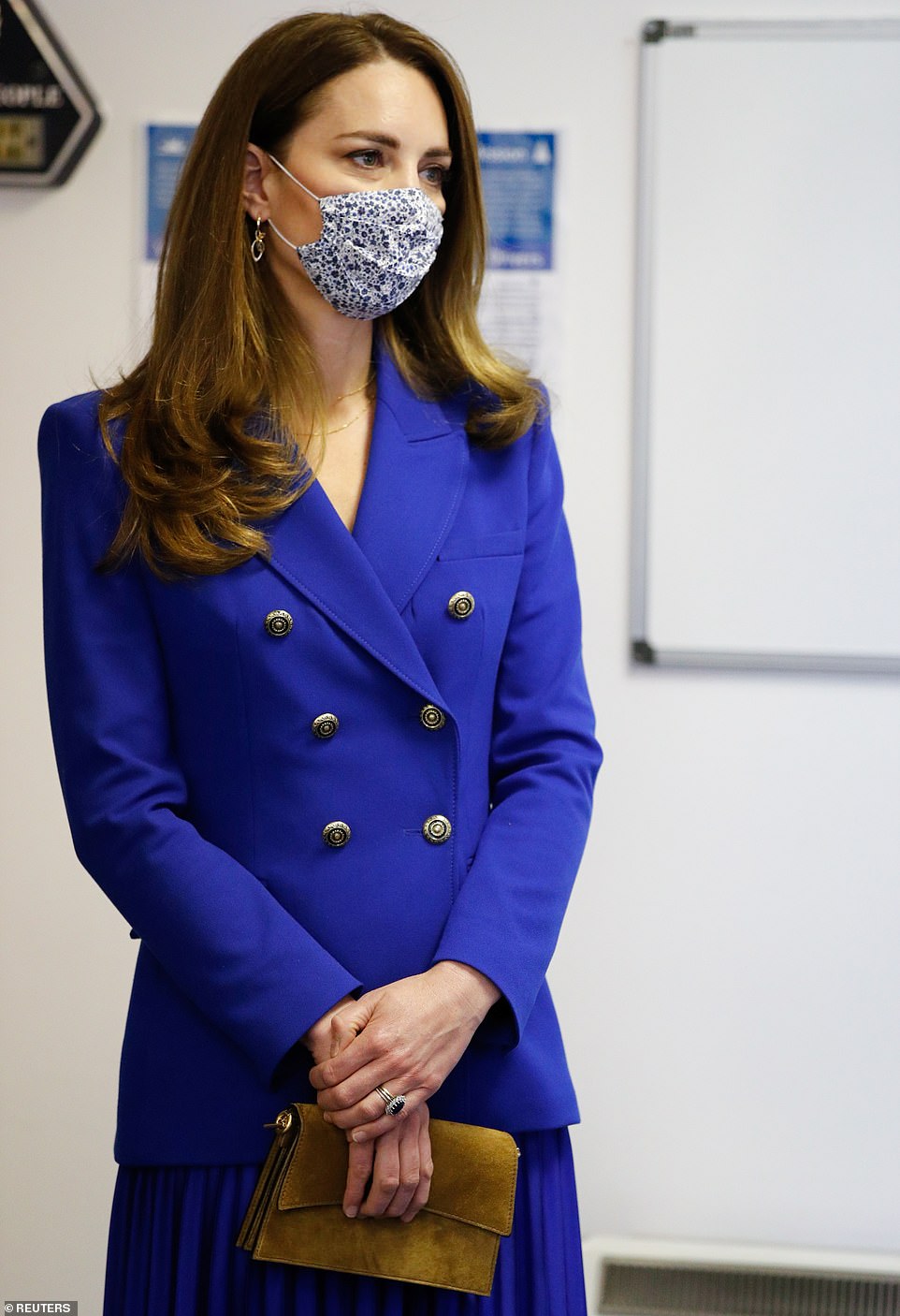 Queen of coordination: The Duchess of Cambridge chose a blue patterned face mask for the outing Vital work: The couple learned about the support the organisation provides to those facing homelessness, mental health issues and substance abuse. Pictured, the Duke and Duchess of Cambridge speak to people who have used the services 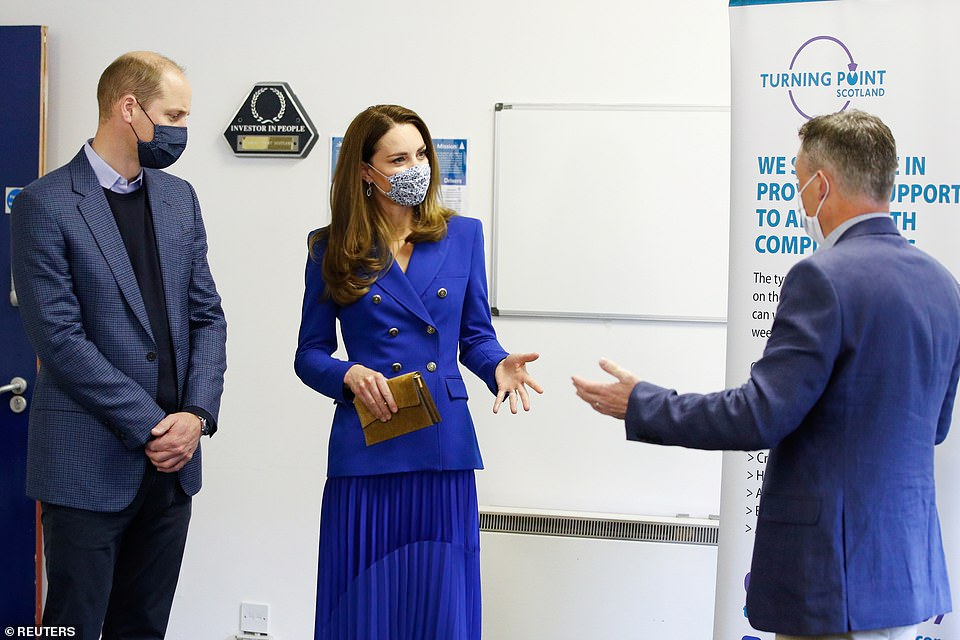 Vibrant: The Duchess of Cambridge opted for a monochrome look for the visit to the Scottish charity today Officials at No 10 have held discussions about how to emphasise ‘cultural bonds’ – with the Royal Family seen as one of the most powerful weapons in the armoury. 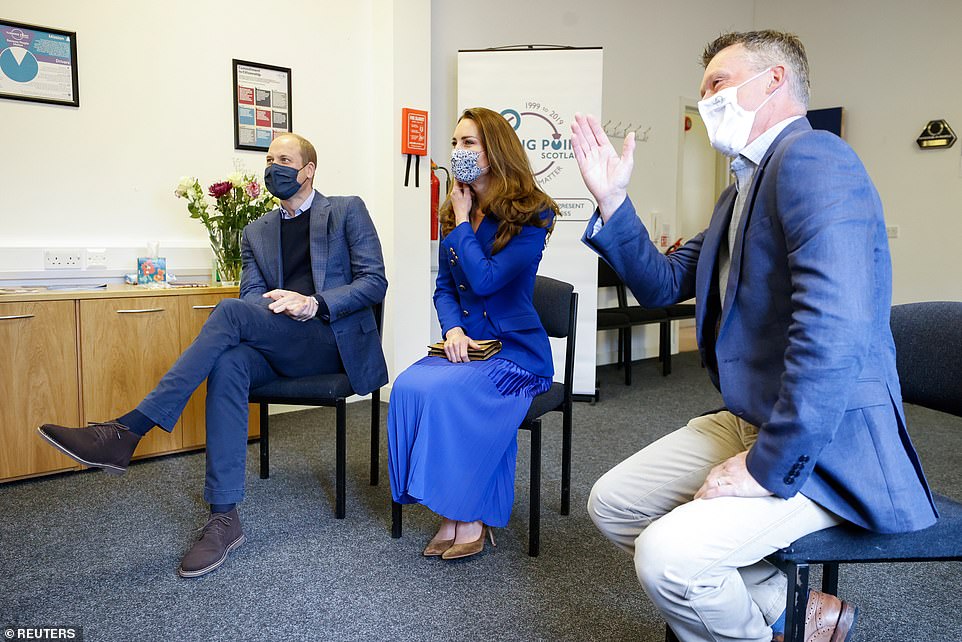 Far-reaching: During their visit, The Duke and Duchess joined a video call with staff and service users from TPS’ Glasgow Overdose Response Team (GORT), to hear how the service works to reduce drug related deaths by providing real-time crisis support for people who have experienced a near fatal overdose, pictured 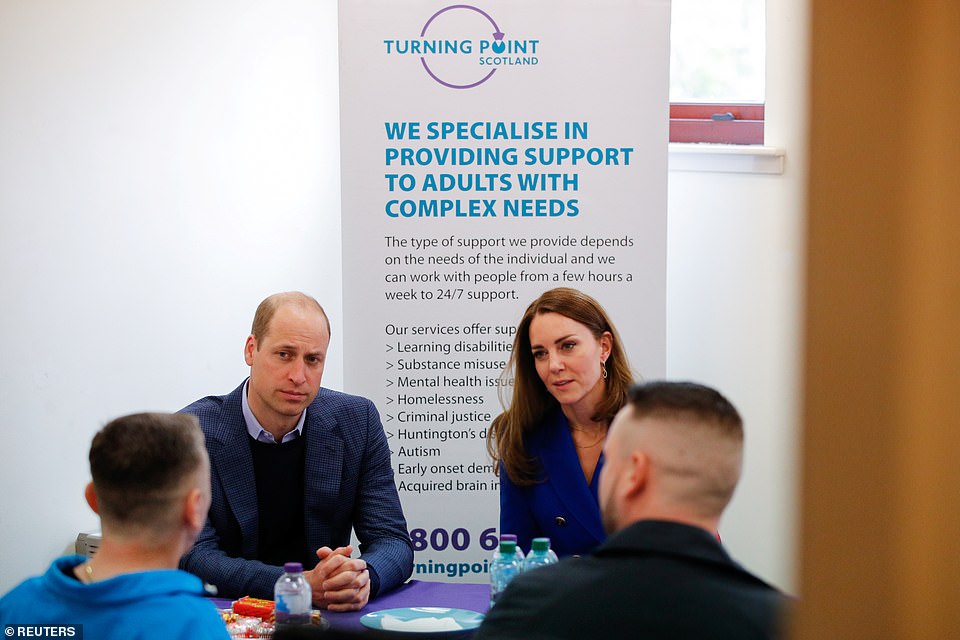 First-hand experience: William and Kate spoke to people who had benefited from Turning Point Scotland’s services 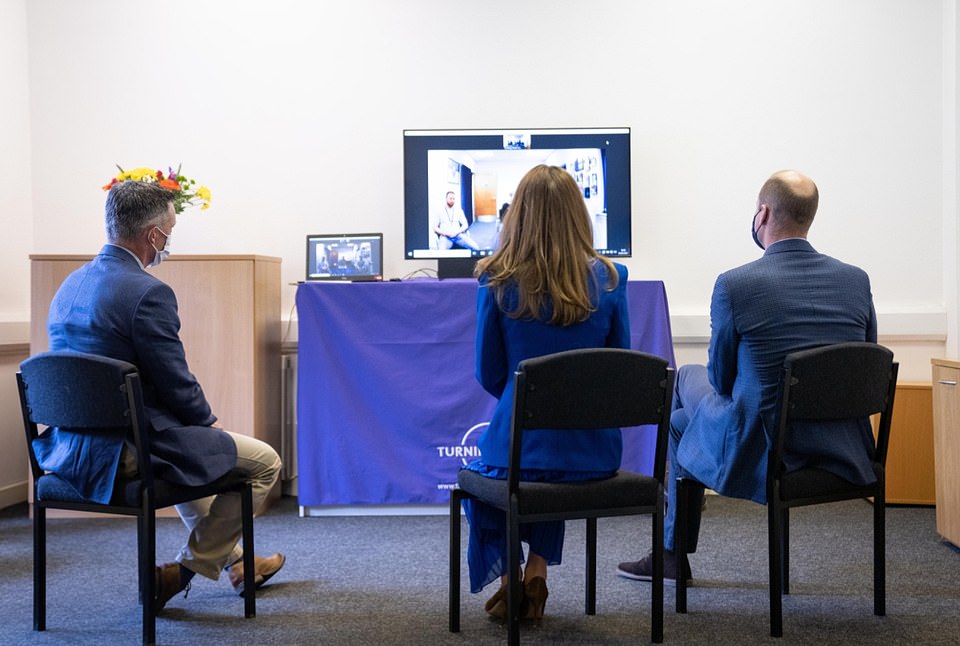 Virtual meeting: The Duke and Duchess of Cambridge spoke to some people via videolink during the outing

The Queen, who on Saturday visited the crew of the aircraft carrier HMS Queen Elizabeth in Portsmouth, made her own apparent comment about a ‘United Kingdom’ in a letter to the Church of Scotland which was read out by her chaplain in Scotland, the Rev Dr George Whyte.

In reference to changes that have taken place during the coronavirus pandemic, she wrote: ‘New bonds have been forged in times of emergency but they will serve us all well in the future as the United Kingdom seeks to rebuild and reshape community life.’

The Prince of Wales and Duchess of Cornwall will also be involved but the decision to send the Cambridges ahead was a clear part of the PR strategy. A source told the Mail On Sunday: ‘It’s about opening a dialogue – listening and talking. All members of the Royal Family have a strong affinity with Scotland.

At the weekend the Duke of Cambridge took an electric car for a high-speed spin around a race track at the Knockhill circuit in Fife, part of a programme of visits to innovative projects north of the border aimed at tackling climate change.

Later William looked happy and relaxed as he grabbed a pint with members of the emergency services at a rooftop bar near Edinburgh Castle to watch the Scottish Cup Final. 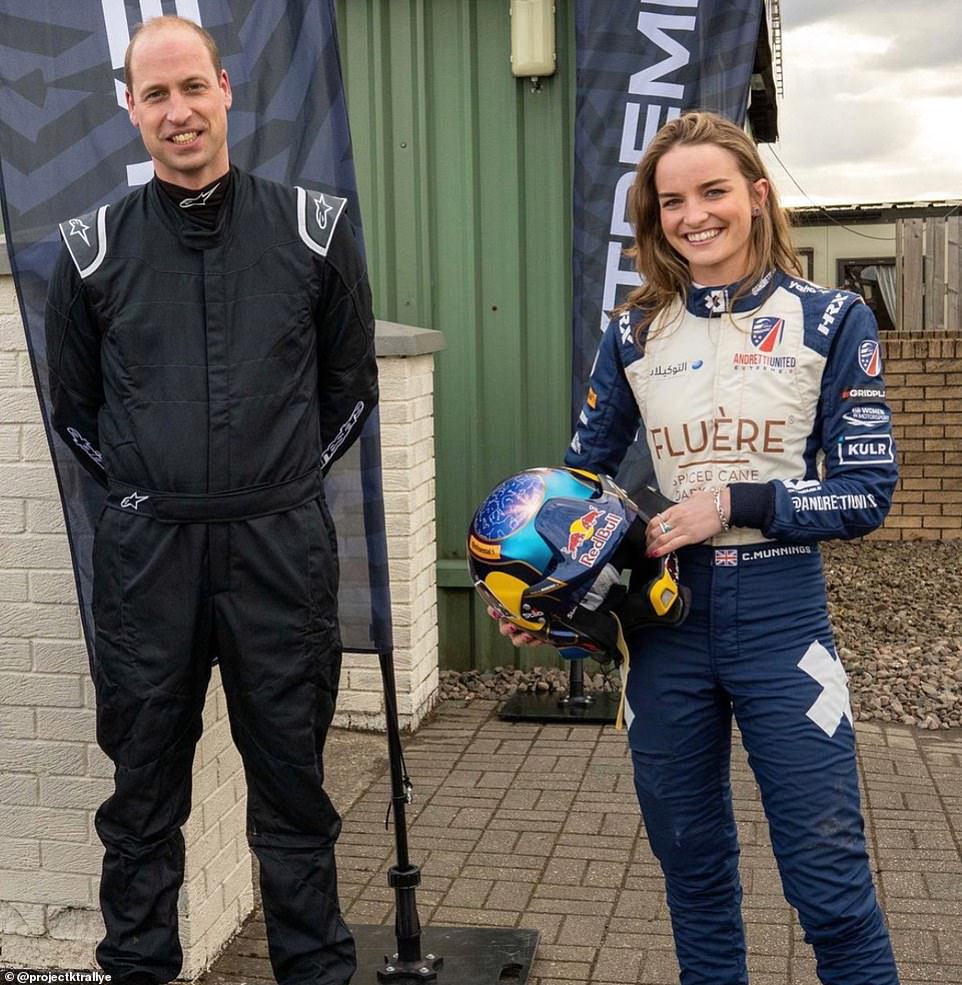 Eurovision winner did not take drugs during final, inquiry concludes