Kate Middleton will attend the Wimbledon women’s and men’s finals this weekend after coming out of self-isolation.

The Duchess of Cambridge was alerted to a contact with a Covid-infected person last Friday afternoon – after spending most of the day at Wimbledon with VIPs including Tim Henman and Joe Wicks.

She will now attend the women’s final with Prince William on Saturday. The Duchess will then go to the men’s final on her own on Sunday, with the Duke expected to attend the England football match at Wembley instead.

However, there is confusion over Kate being out of quarantine already, despite only being alerted a week ago.

Under current guidelines, the Duchess should have quarantined for 10 days after contact, which suggests that it took place last Tuesday, if she comes out today, or last Wednesday if she comes out on Saturday.

She travelled to Wembley to watch England beat Germany on Tuesday alongside William and George. However, the fact that they aren’t isolating suggests Kate was in contact with another person – though she had no other engagements apart from her trips to Wembley or Wimbledon.

Kate is understood to have been alerted personally and was not ‘pinged’ by the NHS Test and Trace app, leaving the All England Club at 5pm – significantly earlier than she has done in previous years – and missing the match involving her friend Andy Murray. 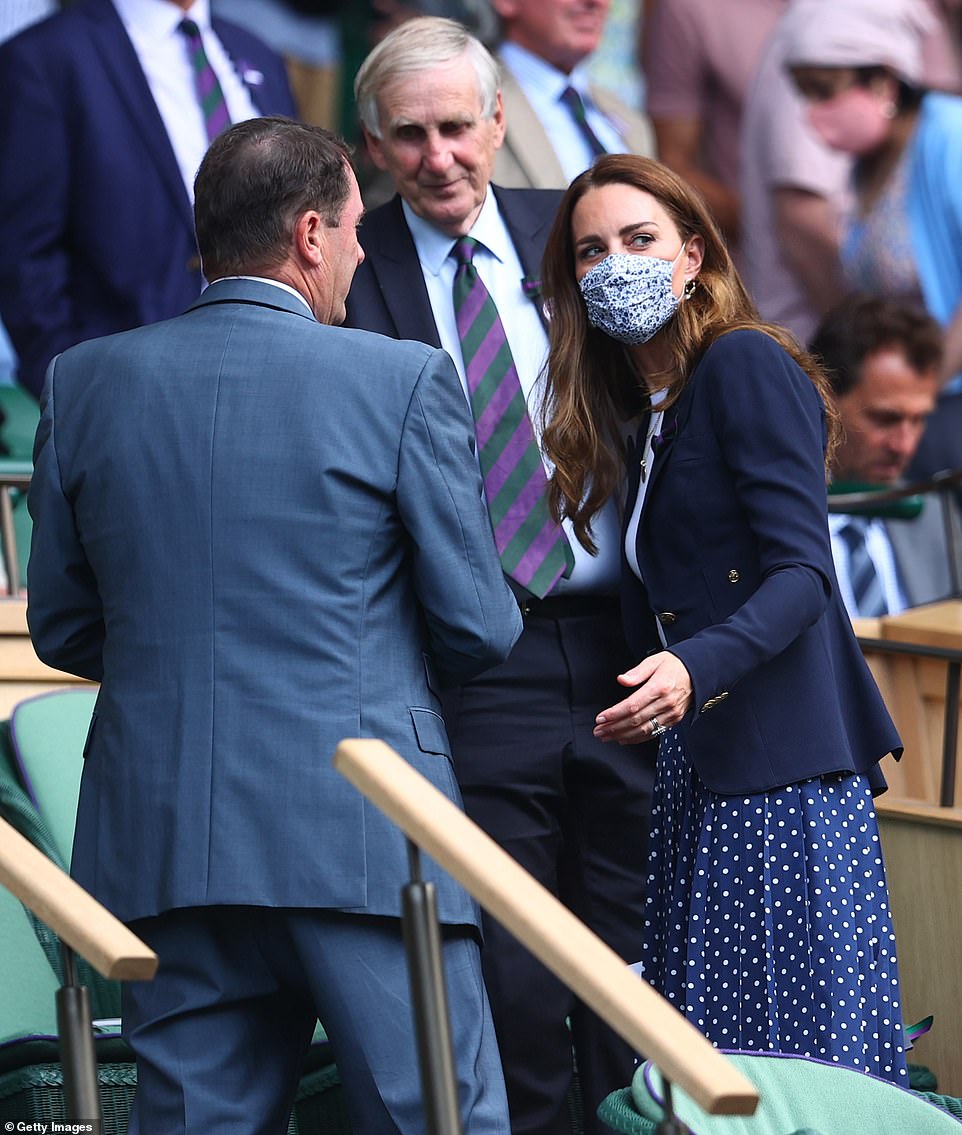 Kate Middleton will attend the Wimbledon finals this weekend. This could be the moment that Kate learned she had to self-isolate and left the Royal Box for home last Friday 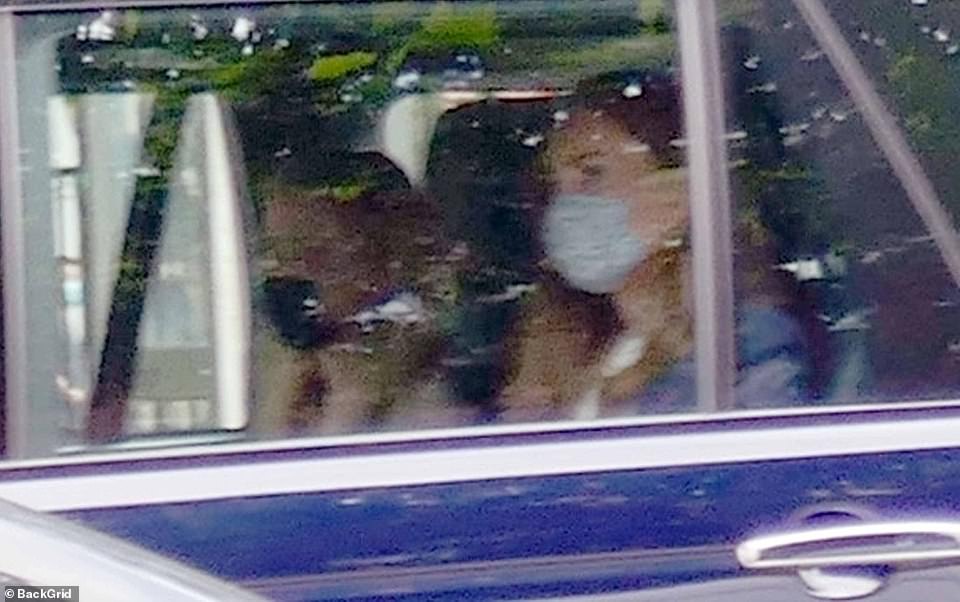 The Duchess of Cambridge was last seen in public being driven home through west London to Kensington Palace last Friday, around the time she may have learned that she needed to self-isolate as Boris Johnson’s farcical rules hit the royal 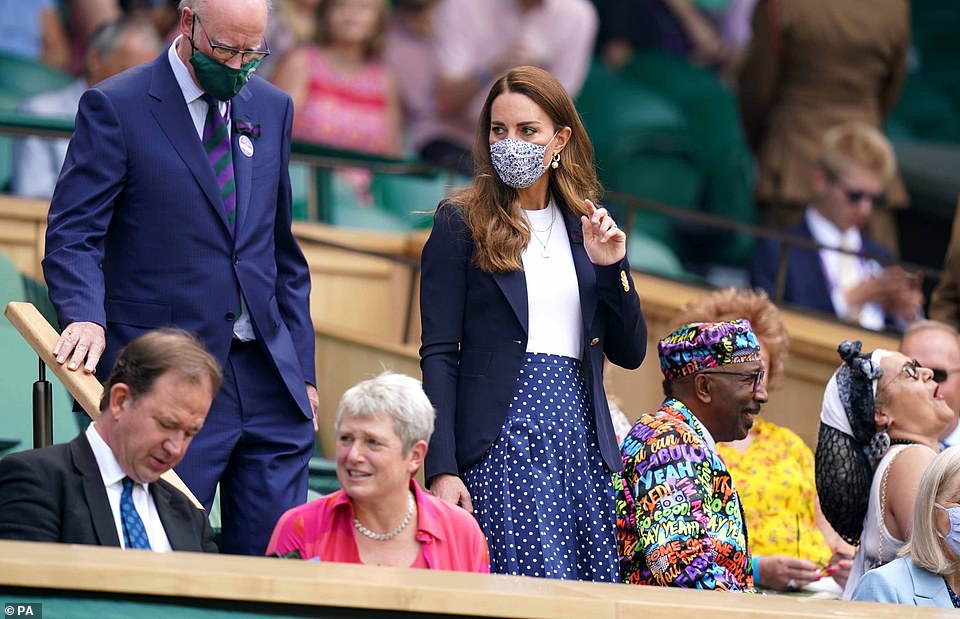 Kate spent much of the afternoon in the Royal Box on Centre Court, where she was surrounded by other VIPs

On Friday Kate spotted looking serious as she was driven out of Wimbledon’s gates heading for Kensington Palace, where she was later holed up and unable to leave – even for food or medicine. She was not permitted to have visitors in her home, including family and friends, and was even told to avoid contact with anyone she lives with as much as possible.

Her quarantine prevented the Duchess from attending the NHS’ 73rd birthday celebrations with William at St Paul’s Cathedral and Buckingham Palace yesterday.

Sources stressed that she followed rules laid down at Wimbledon, which require visitors to wear a mask when moving through the grounds at SW19 but not while sitting in the stands.

The duchess is said to have had her second vaccination even though it is only just over five weeks since she released pictures of her getting her first at the Science Museum in London. Until yesterday, the guidelines stipulated an 11 or 12-week gap between jabs for under-40s not classed as vulnerable, although in some cases a shorter wait was allowed.

Her ten-day self-isolation period includes the day on which she was last in contact with the person who tested positive. If it was on Wednesday, she could, in theory, be free to return to official duties by the weekend.

MailOnline understands she was alerted about the contact with a Covid-infected person on Friday afternoon – after spending most of the day at Wimbledon with VIPs including Tim Henman, who is not self-isolating. It means she must quarantine for ten days even if she tests negative, which she has, up to four times, in the past seven days including before and after her Wembley trip with William and George.

It is not known if the Duchess of Cambridge was alerted after being ‘pinged’ via the NHS app, a phone call from test and trace or if she or her team was contacted personally – but William’s ability to continue his duties means the covid case is unlikely to be in their inner circle.

When her isolation was revealed, Kensington Palace said in a statement: ‘Last week The Duchess of Cambridge came into contact with someone who has subsequently tested positive for Covid-19. Her Royal Highness is not experiencing any symptoms, but is following all relevant government guidelines and is self-isolating at home’. 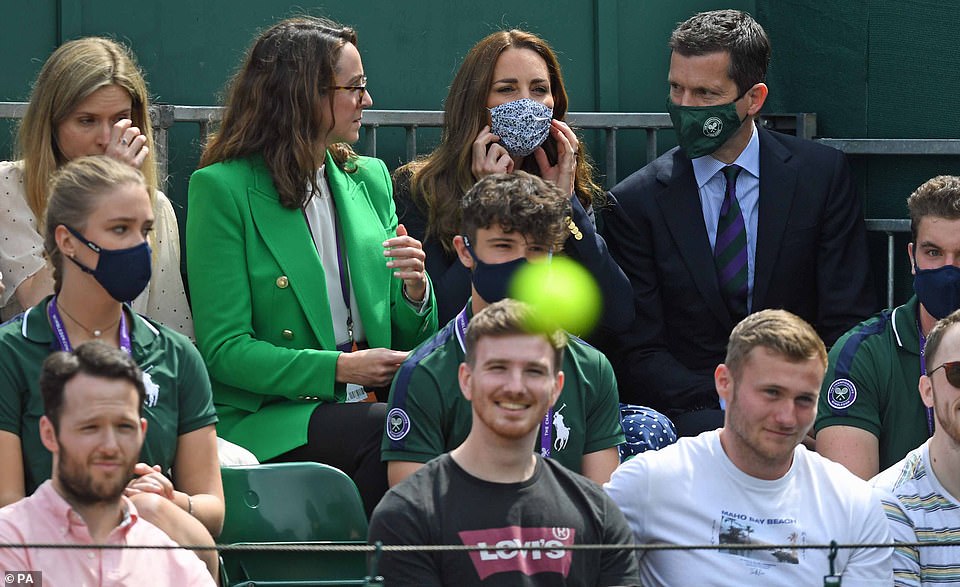 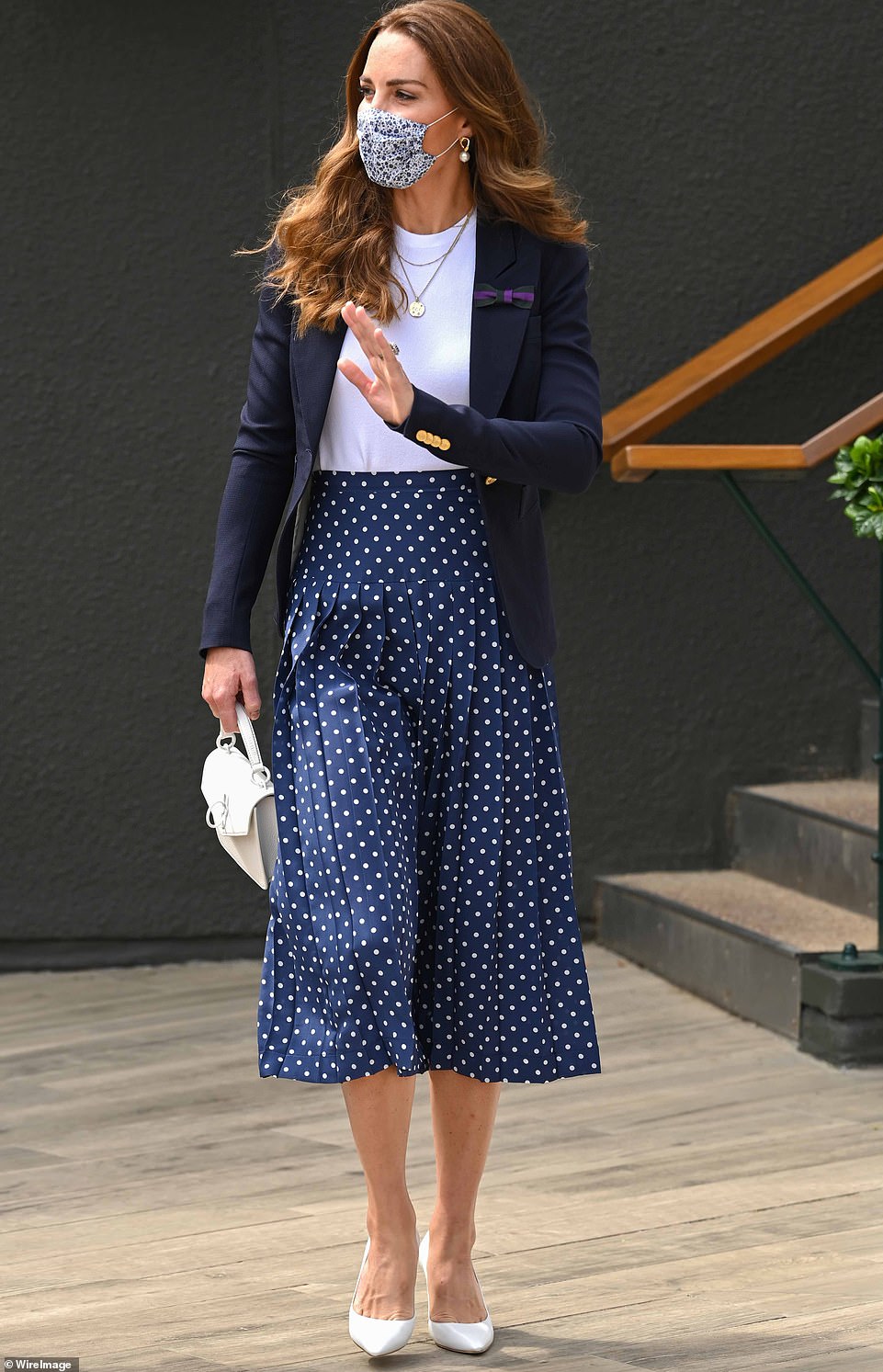 Kensington Palace has not revealed where or when exactly the contact was only saying it was ‘last week’, when Kate’s only two public engagements were at the All England Club on Friday and with William and George at England’s historic win over Germany on Tuesday night.

Kate has spent time close to a host of VIPs including David Beckham and Ed Sheeran at Wembley and Tim Henman and Joe Wicks at Wimbledon.

But it is not known if any of them tested positive for covid, or whether the contact came via a friend, a member of staff or another parent on the school run last week.

The Duchess arrived at Wimbledon at around 11am and was joined by Wimbledon chief executive Sally Bolton and former British tennis player Tim Henman on an outside court where they watched Andy Murray’s brother Jamie play.

She was also pictured laughing and smiling as she prepped strawberry desserts at the All England Club before heading to the Royal Box where she seen speaking to a beaming Joe Wicks, leaving around 5pm.

Kate’s only other public engagement was on Tuesday when she went to Wembley Stadium with William and George to watch England beat Germany.

Outdoor gyms are great when it's warm. What will exercisers do in winter weather?

Biden's pre-taped message, which was shared with CNN, will air throughout a ceremony in Kosovo to...