‘Get out of my pub!’ Keir Starmer is THROWN OUT of a Bath boozer in an astonishing bust-up with a Labour-supporting landlord who accuses him of ‘failing to be the opposition’

Sir Keir Starmer was thrown out of a pub today after being confronted by a Labour-supporting landlord furious that he supported the lockdown which had closed his business for months.

In astonishing scenes in Bath today, Rod Humphris, the lockdown-sceptic landlord of the Raven, had to be held back by the Opposition Leader’s security guards as he demanded he leave.

The incident was captured on camera by reporters amid a visit to the city to support West of England metro mayoral candidate Dan Norris ahead of the forthcoming elections.

Mr Humphris had clashed with Sir Keir outside the Raven, accusing him of having ‘failed to be the opposition’ by supporting the lockdown and backing plans to make schoolchildren wear masks.

As the politician paused the landlord waved a piece of paper at him, saying: ‘Do you know what the average age of death with Covid is?

‘According to the Office for National statistics it’s 82 years and three months. The average age of death normally? Eighty one years.

‘Do you understand we have f***ed our economy because old people are dying?’

As Sir Keir tried to walk away he continued: ‘No, no I came here to speak to this man not your security. 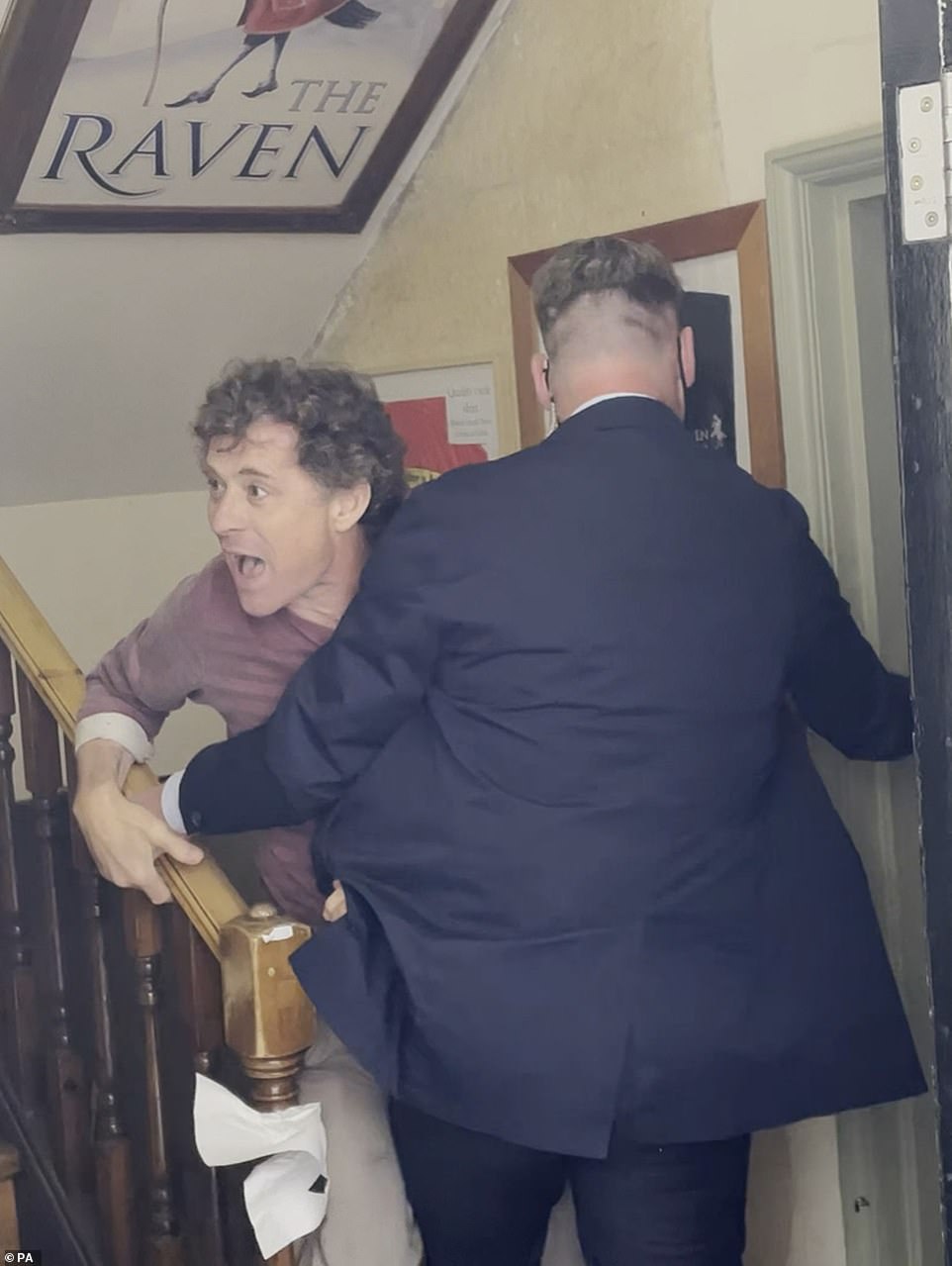 In astonishing scenes in Bath today Rod Humphris, landlord of the Raven pub, had to be held back by the Opposition Leader’s security guards as he demanded he leave. 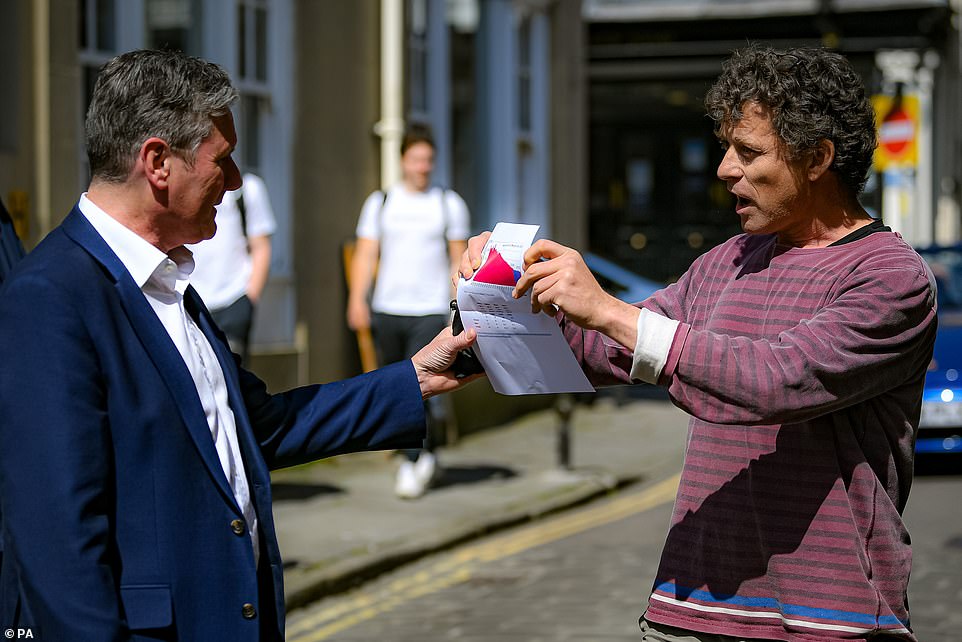 Mr Humphris had clashed with Sir Keir outside, accusing him of having ‘failed to be the opposition’ by supporting the lockdown and backing plans to make schoolchildren wear masks. 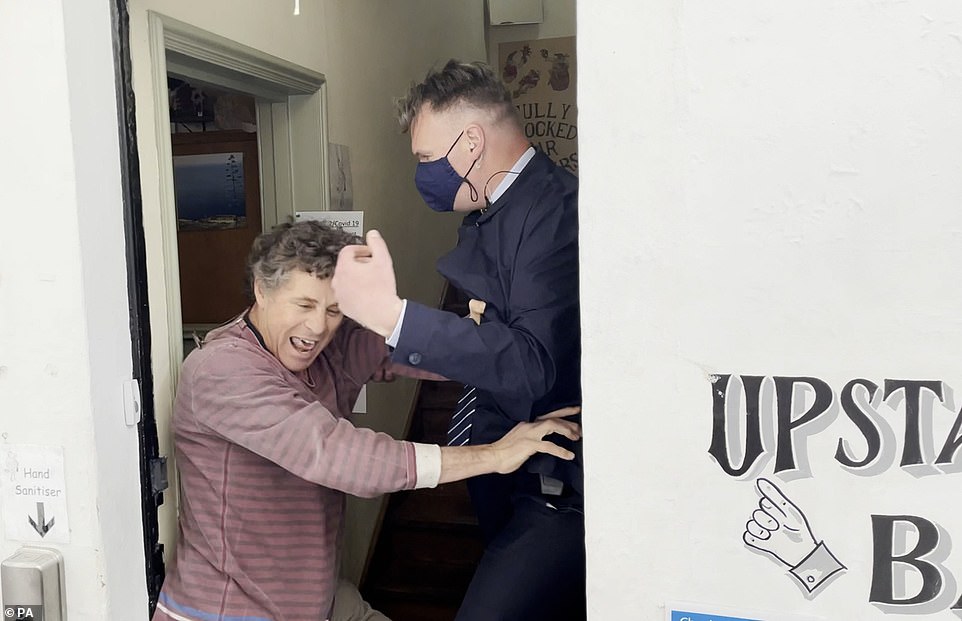 This prompted the scenes in which Mr Humphris demanded the Labour leader leave the pub.

Boris Johnson faced humiliation today after he was unable to name the current mayor of the West of England – despite the regional leader being a Conservative.

The Prime Minister was asked during a campaign visit to Gloucestershire ahead of local elections next month if he was able to name Tim Bowles, the incumbent mayor who was elected in 2017.

But Mr Johnson failed to name Mr Bowles after repeated questions, with the PM resorting to saying he was ‘campaigning for the West of England mayor, and all Conservative candidates’.

Mr Bowles is the first metro mayor for the West of England Combined Authority, made up of three of the councils in the region – Bath and North East Somerset, Bristol and South Gloucestershire.

Finally Sir Keir stopped and confronted him, pointing out the work done by the NHS in the pandemic, including his wife Victoria, who is a nurse.

He said that they had been ‘completely overwhelmed’ with cases, adding: ‘They have been on the front line keeping people alive, so I really don’t need lectures from you about this pandemic. Thank you. Shall we go in?’

This prompted the scenes in which Mr Humphris demanded the Labour leader leave the pub.

Sir Keir, who was wearing a black face mask while inside, left the pub following the confrontation, accompanied by members of his team.

Later, the landlord, who said he does not agree with coronavirus lockdowns, said: ‘He walked into my pub without asking and I threw him out. Or at least, I did my best to throw him out – his security got in the way.’

On why he asked Sir Keir to leave, he added: : ‘I had heard that the Labour Party were coming round and he turned up and I told him what I thought of him, basically.

‘I think he has utterly failed us as the Leader of the Opposition. He has completely failed to ask the questions that needed asking, like, why did we throw away our previous pandemic preparedness?

Labour said on Twitter that it would ‘not be amplifying’ the footage of Labour leader Sir Keir Starmer being confronted by the landlord.

The tweets said: ‘A clip circulating online shows Keir Starmer being confronted by someone spreading dangerous misinformation about the Covid-19 pandemic.

‘We will not be amplifying it.

‘Keir argued that our NHS staff have been working tirelessly to protect public health and that restrictions – while painful – have been absolutely necessary to save lives.’