Keir Starmer WILL be investigated over ‘beergate’

The Labour leader is at risk of being engulfed by the so-called ‘Beergate’ row after Durham Police dramatically declared it will probe ‘significant new information’ about the gathering.

The force initially decided Sir Keir did not breach Covid rules when he and party aides had drinks and a takeaway in April 2021, when millions of Britons were banned from mixing indoors in most circumstances.

But following intense pressure and a series of revelations – including that up to 30 people attended and shared £200 worth of food – the position has shifted.

Sir Keir maintained a stony silence as journalists threw questions about the situation on a visit to Carlisle this afternoon. Labour said the party was ‘happy to answer any questions there are and we remain clear that no rules were broken’.

However, there is frustration among Tories that the decision was only taken after the local elections – when the PM’s own fine over the Partygate scandal damaged his support.

The development could raise serious doubts over Sir Keir’s future, as he trenchantly argued that Mr Johnson should resign when he was found to have broken the law.

Sir Keir had been filmed drinking a bottle of lager with colleagues at the event at the offices of Durham MP Mary Foy in the run-up to last year’s local elections – and has been wriggling when asked about the incident all week.

Sadiq Khan risked inflaming the row earlier this week by admitting there was ‘equivalence’ between Keir Starmer’s actions and the PM’s birthday gathering in the Cabinet Room in June 2020 – which has seem him and Chancellor Rishi Sunak fined. Mr Khan suggested the main difference was that the Labour leader only broke lockdown once.

Tory MP Richard Holden, backed by several ministers, wrote to Durham Constabulary insisting there was now ‘incontrovertible’ evidence Labour had ‘lied’ about the events of a year ago, including there now disproved claim that the deputy leader Angela Rayner was not there.

A spokesman for Durham Constabulary said: ‘Earlier this year, Durham Constabulary carried out an assessment as to whether Covid-19 regulations had been breached at a gathering in Durham City on April 30 2021. At that time, it was concluded that no offence had been established and therefore no further action would be taken.

‘Following the receipt of significant new information over recent days, Durham Constabulary has reviewed that position and now, following the conclusion of the pre-election period, we can confirm that an investigation into potential breaches of Covid-19 regulations relating to this gathering is now being conducted.’

A Labour spokeswoman said: ‘We’re obviously happy to answer any questions there are and we remain clear that no rules were broken.’ 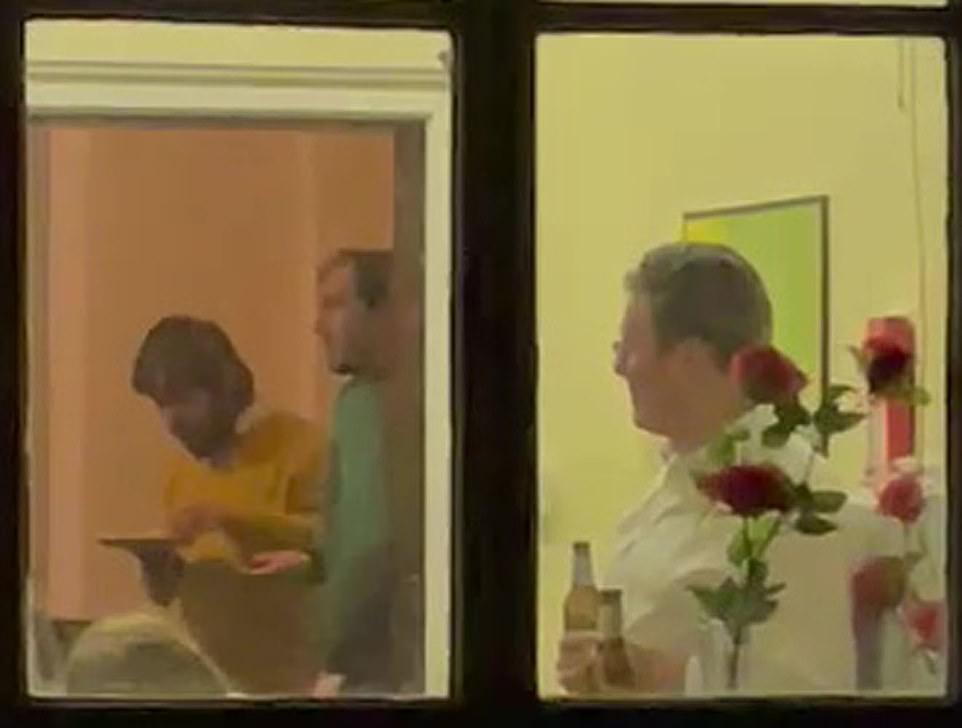 Police will probe this event in April 2021 after Sir Keir struggled to answer questions about the event at Durham Miners Hall, which took place at a time when almost all indoor socialising was banned 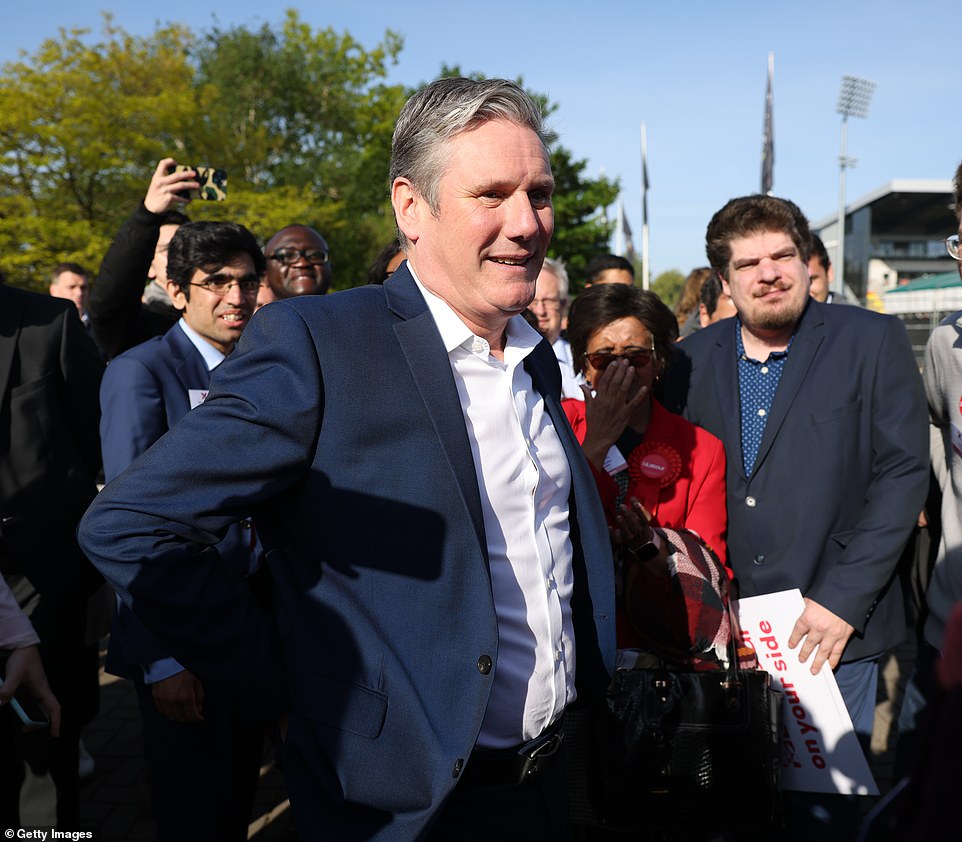 Tory MP Ric Holden, who has been pushing Durham Police to look again at the issue, said the force was doing the ‘right thing’

What other results are expected and when?

Around 9am: Counting begins for a further 71 councils in England and all councils in Scotland and Wales.

The Times reported that Durham Police decided ‘days ago’, but held off announcing it because of fears it could sway votes yesterday.

It came as Sir Keir toured Barnet and Carlisle this morning hailing gains in the local elections, and claiming Labour was ‘back on track’ after the Corbyn era.

But despite his triumphalism voting guru John Curtice said Labour still does not look in a position to win a majority at the next general election and the left-wing campaign group Momentum goaded that the figures were ‘distinctly underwhelming’ and had ‘gone backwards’.

Labour is under pressure to release the Beergate Tapes following Sir Keir’s suggestion that he recorded video clips after his late-night takeaway.

Having said the curry was consumed during a break from work, Sir Keir has struggled to prove that he carried out any duties after he was filmed holding a bottle of beer at Durham Miners Hall at 10.04pm.

An ‘online event for members’ cited as an example concluded at 9.18pm.

Sir Keir has also said he recorded ‘pieces to camera’ for social media – but just one Facebook clip appears to have been recorded that day, and it was shot during daylight hours.

‘Shifty Starmer’s accounts of what happened at his beer and curry night just don’t add up,’ Mark Jenkinson, MP for Workington, said.

‘What were these videos he was allegedly filming, and why won’t he release them?’

The London Mayor gave a distinctly half-hearted defence of Sir Keir earlier this week suggesting the main difference was that the Labour leader only broke lockdown once.

The extraordinary comments came after days in which an increasingly tetchy Sir Keir has struggled to shake off questions about consuming beer and curry with up to 30 aides on an election visit to Durham last year.

In an interview on Talk TV on Wednesday night, Mr Khan was asked to explain how that differed from the June 2020 episode when Mr Johnson was presented with a cake in the Cabinet Room – which has seen both him and Rishi Sunak fined.

Mr Khan initially started referring to other alleged incidents in No10, before conceding: ‘I think you make a fair point. If there was one occasion where an incident happened in Downing Street I think it’s a fair point to say there is equivalence.

‘We now know though there were many occasions and a culture versus one occasion having a beer and a curry at the end of a campaigning day.’ 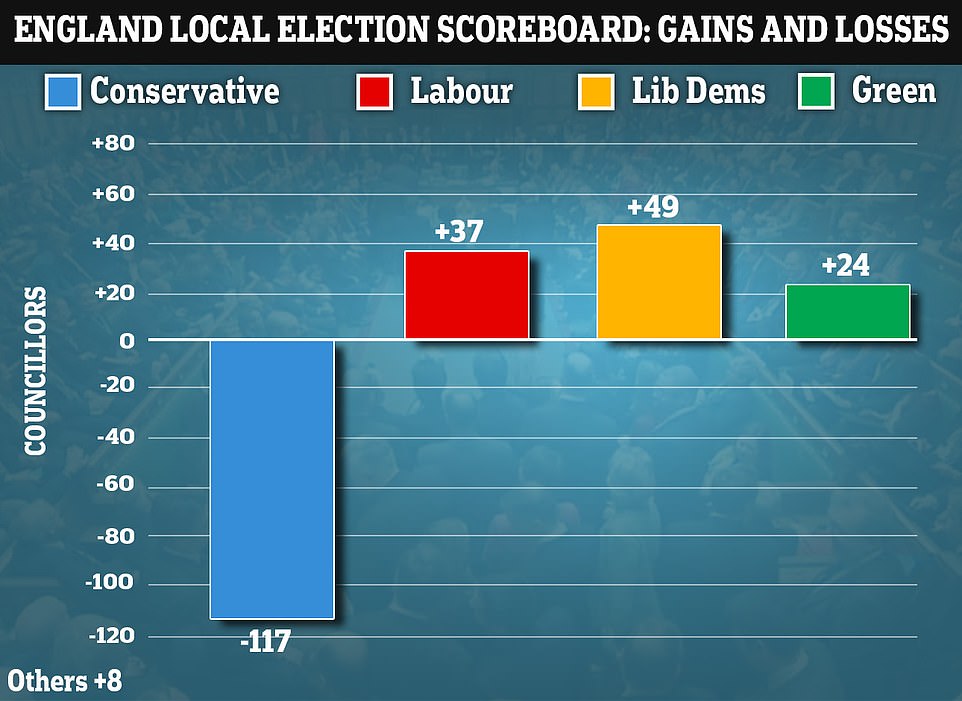 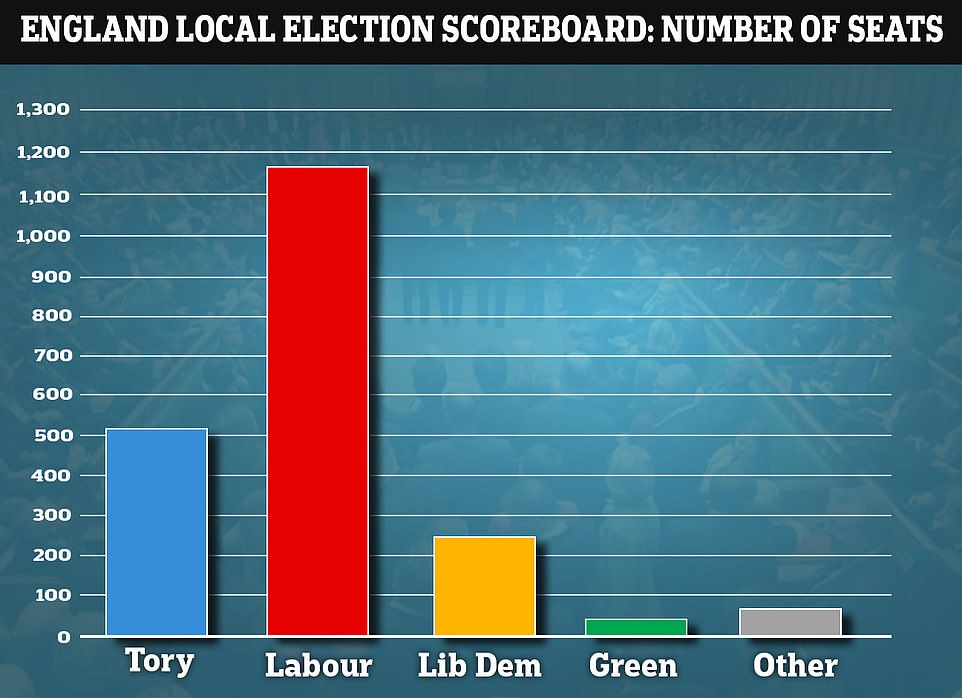 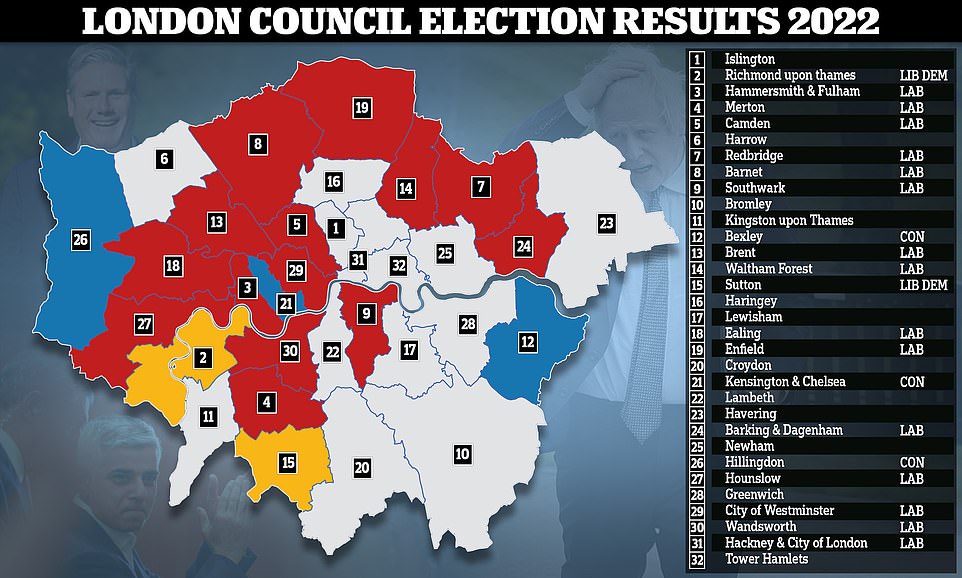 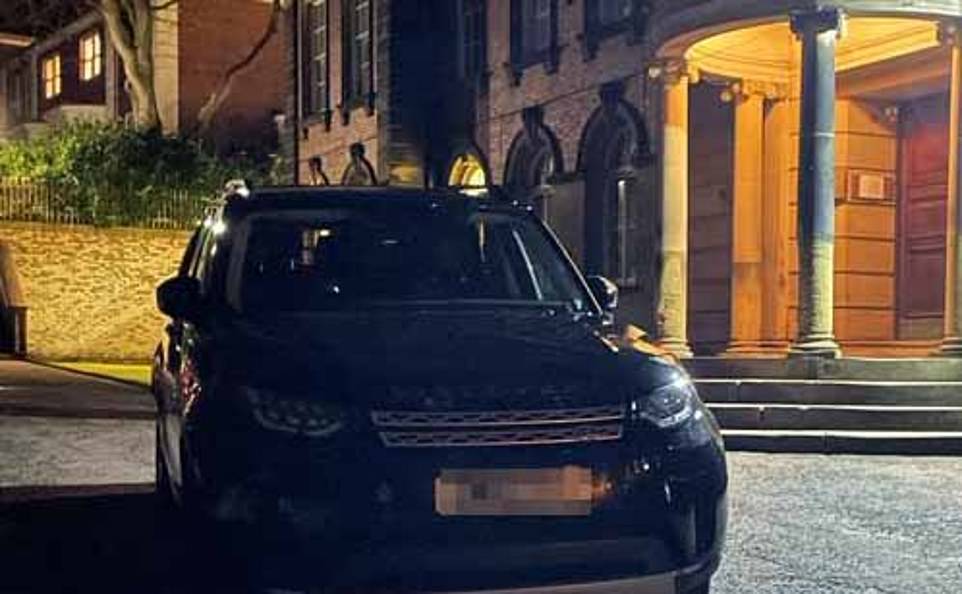 A picture emerged of what may have been his official car (above) in Durham that evening. This raises the prospect that his police protection team might be able to provide bombshell testimony, in the same way that officers are being asked for their recollections of ‘Partygate’ events in Downing Street 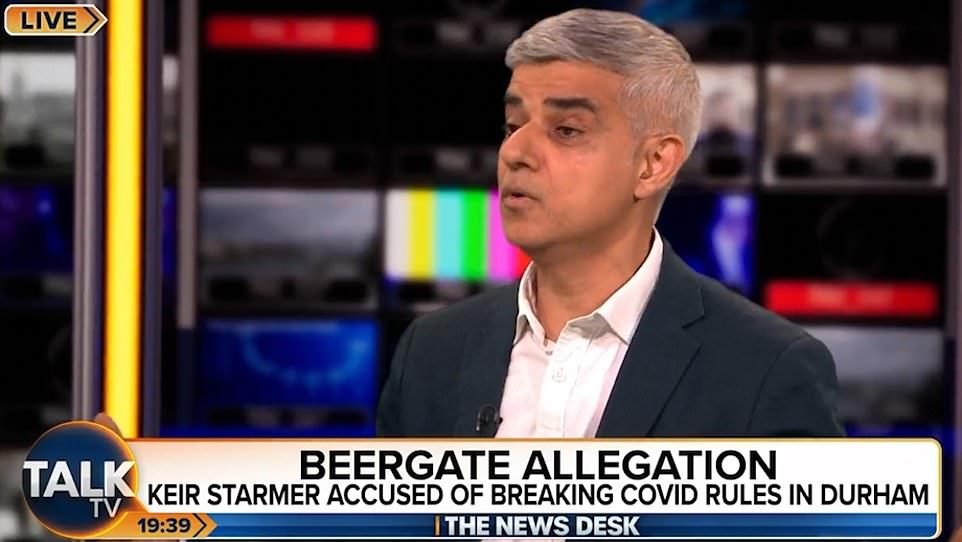 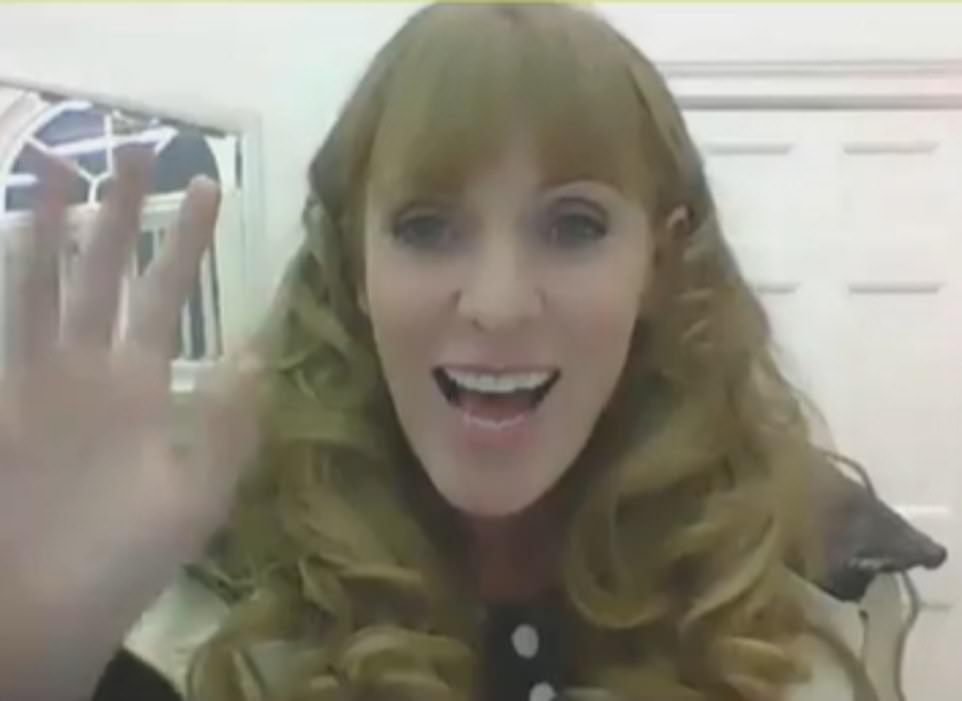 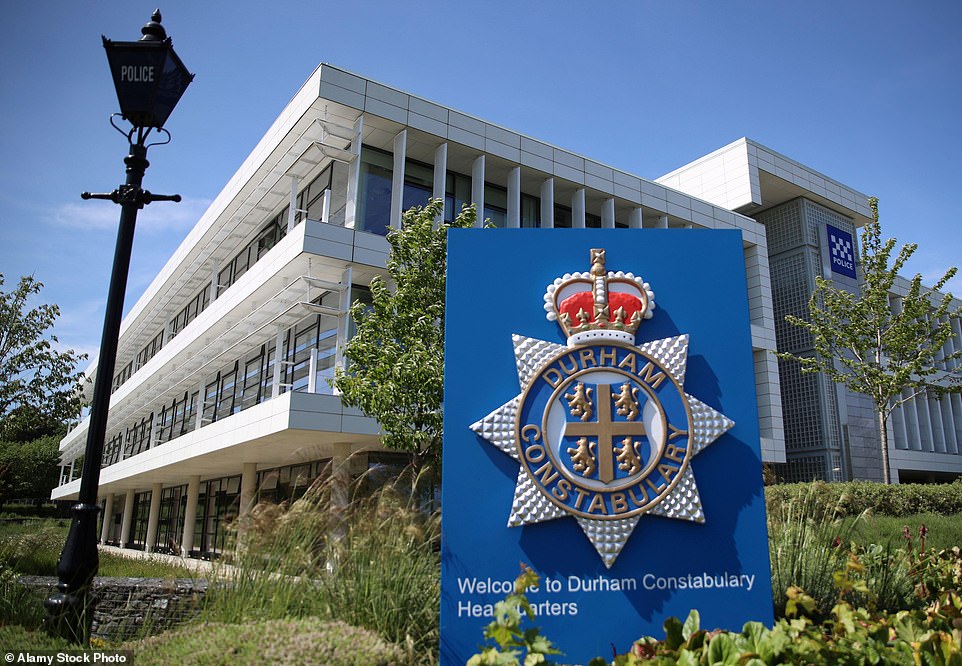 Mr Holden, Tory MP for North West Durham, wrote to Durham Constabulary (pictured) a week ago asking it to reconsider a probe in light of the Met’s fine

Former chief constable of Manchester, Sir Peter Fahy, has said Durham police should look again at the evidence – but stressed that the events seemed ‘starkly different’ to the issue of Downing Street parties.

On ITV’s Good Morning Britain earlier this week the Labour leader insisted there was ‘no breach of the rules’, despite lockdown laws at the time banning almost all indoor socialising.

However, he did not challenge reports that the Friday night gathering was attended by up to 30 people.

Labour officials are said to have ordered £200 of takeaway curries for staff at the end of a long week on the campaign trail.

Sir Keir told ITV’s Richard Madeley: ‘This was brought in and at various points people went into the kitchen, got a plate, had some food to eat and got on with their work.’

At the time, lockdown laws allowed staff to meet indoors if doing so was ‘reasonably necessary for work’. However, official guidance on buffet-style serving was clear.

It stated: ‘There should not be any sharing of food and drink by staff who do not share a household. Minimise self-serving options for food and drink. As far as possible, food served and/or displayed should be individually wrapped to minimise contact and avoid spread of infection.’

Having claimed his curry – and beer – were consumed during a break from work, yesterday saw Sir Keir struggle to say what duties he carried out after he was filmed holding his bottle at 10.04pm. The ‘online event for members’ cited as an example concluded at 9.18pm.

Sir Keir also stated that he had recorded ‘pieces to camera’ for social media, but just one Facebook clip appears to have been recorded that day – and it was shot during daylight hours.

Mr Holden, Tory MP for North West Durham, told his local force that an event involving 30 people was ‘well above the number allowed to meet indoors under the regulations (at the time), and definitely not necessary for work purposes’.

In a letter seen by the Daily Mail, Mr Holden noted that bystanders were now coming forward who were not interviewed when the police initially dismissed the case last year after reviewing a 43-second video filmed by a passer-by.

The letter to Durham’s deputy chief constable Ciaron Irvine continued: ‘Given the serious nature of this new testimony, I hope you will be reaching out to the witnesses involved, as well as the Metropolitan Police officers present at the event, as part of your investigation into what took place.’

‘I think, once again, it highlights that a lot of the legislation around coronavirus was confused, so I think the police have been struggling.’

A Durham Constabulary spokesman said yesterday: ‘We have received a number of recent communications on this subject, which we are considering and will respond in due course.’

NBA: Embiid’s shock, a matter of state in the needy Sixers