They recently got back from a picturesque Italian vacation where they ramped up the PDA.

And Kendall Jenner, 25, continued to be affectionate with her NBA beau Devin Booker, 24, as they exited Nobu Malibu hand in hand after a romantic date.

The in-demand supermodel flexed her personal style as she paired a nude dress with edgy black boots, and the couple walked to their valeted car with a security guard. 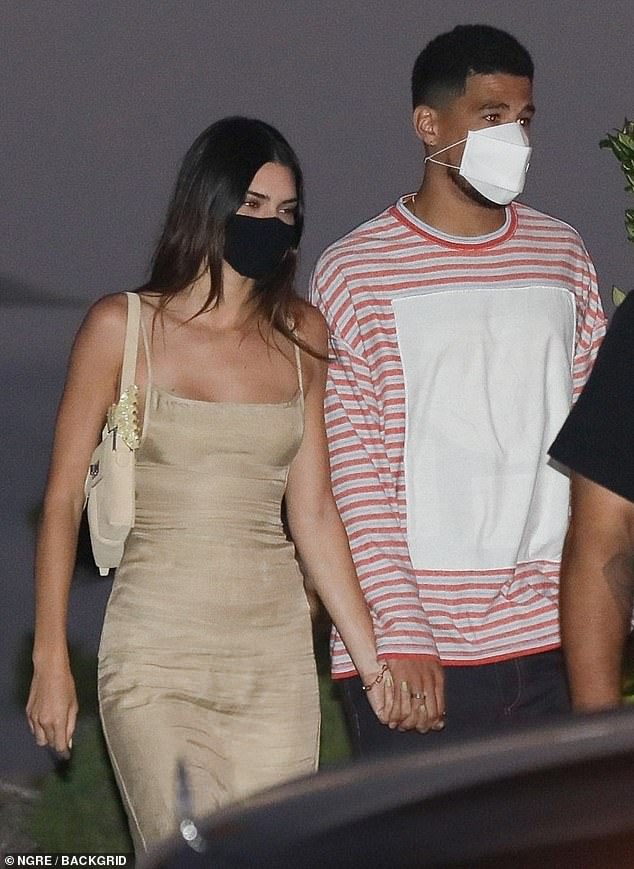 Malibu nights: The couple of one year were seen exhibiting some light PDA as they exited Nobu Malibu holding hands following a romantic dinner date

Kendall was seen wearing a nude slip dress that hugged her slim frame which she paired with black boots that hit below the knee.

She carried a chic nude bag over her shoulder and donned a black face mask which offset her bronzed skin after a week yachting around the Amalfi coast.

The reality star left no room for confusion that the Phoenix Suns shooting guard was her man as she tightly grasped his hand while they walked to their vehicle.

And Booker was seen returning the affection as he latched on to her while wearing a striped red tee and a pair of jeans. 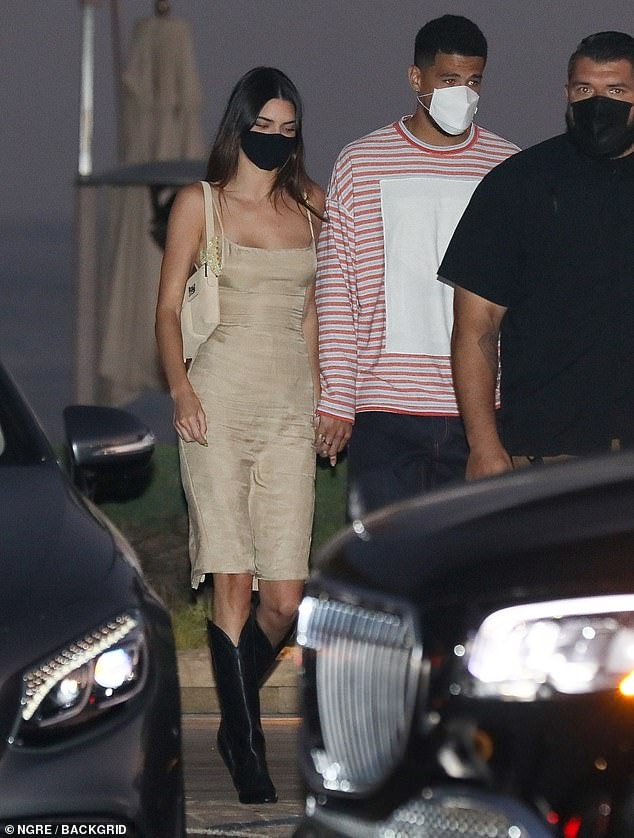 On point: Kendall was seen wearing a nude slip dress that hugged her slim frame which she paired with black boots that hit below the knee 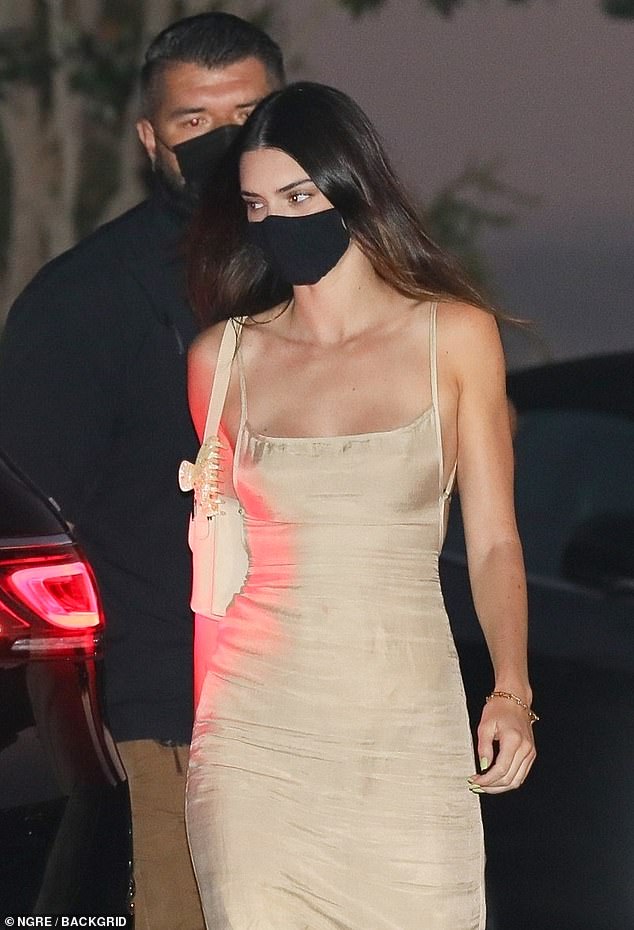 Stepping out: The pair detached hands only so they could each get into their respective sides of the vehicle

The seemingly smitten pair only detached hands so they could get into their respective sides of the vehicle before they drove off together.

Kendall and Devin — who celebrated their one year anniversary in June — have only begun to go more public with their romance in recent months.

And as things continue to get more serious, the pair took their love overseas as they enjoyed vacation together sailing around Positano, Nerano, Ponza and Sardinia  this week.

The couple were seen kissing and cuddling on numerous occasions but she had previously spoken out about the importance of keeping the relationship private on the Keeping Up With The Kardashians reunion. 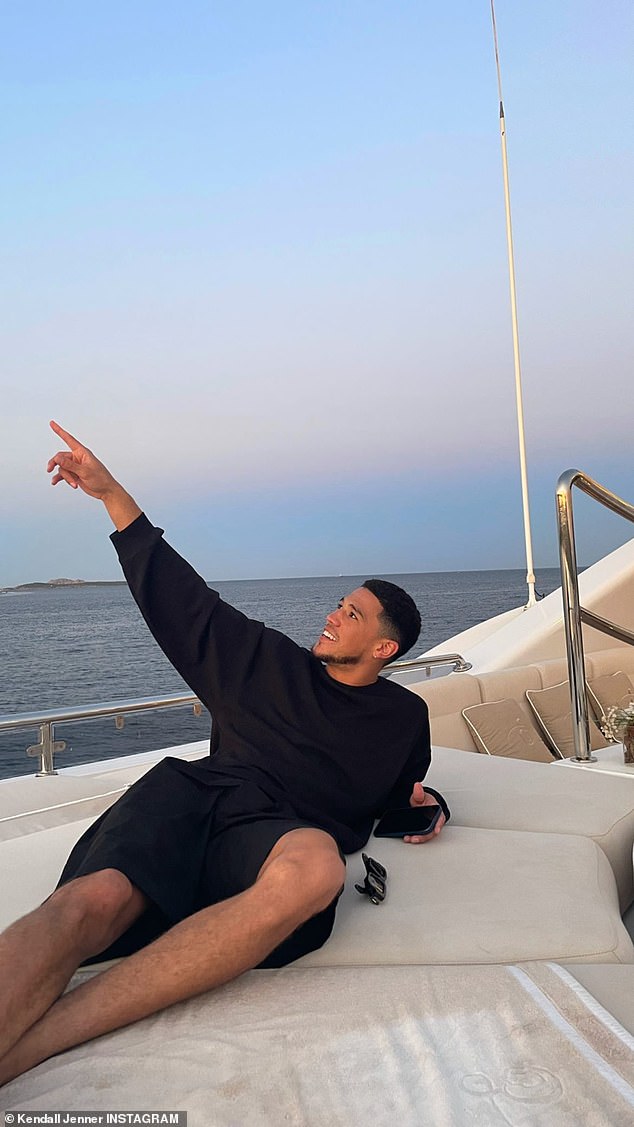 Her man: The reality star only began to post more of her NBA beau as their one year anniversary approached in June 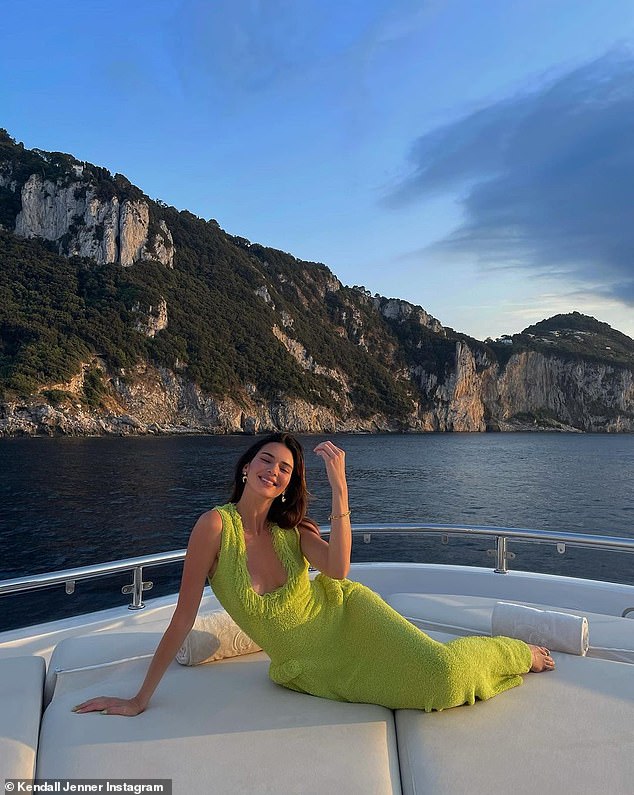 Happy place: Kendall treated her fans to a few looks at her luxury Italian vacation where she did not cease to wow in the wardrobe department; pictured August 24

‘I think it makes my life a lot easier and our relationship a lot better, to be completely honest. I just feel like it’s a private matter, it’s not really for anybody else to judge or know.’

Despite their level of commitment to each other, a source told ET recently that they’re in no rush to make serious decisions about the future.

‘They’re not putting any sort of pressure on things for the future. They realize they’re both still young and have big futures ahead of them. Right now they’re just enjoying their time together and taking things as they come.’ 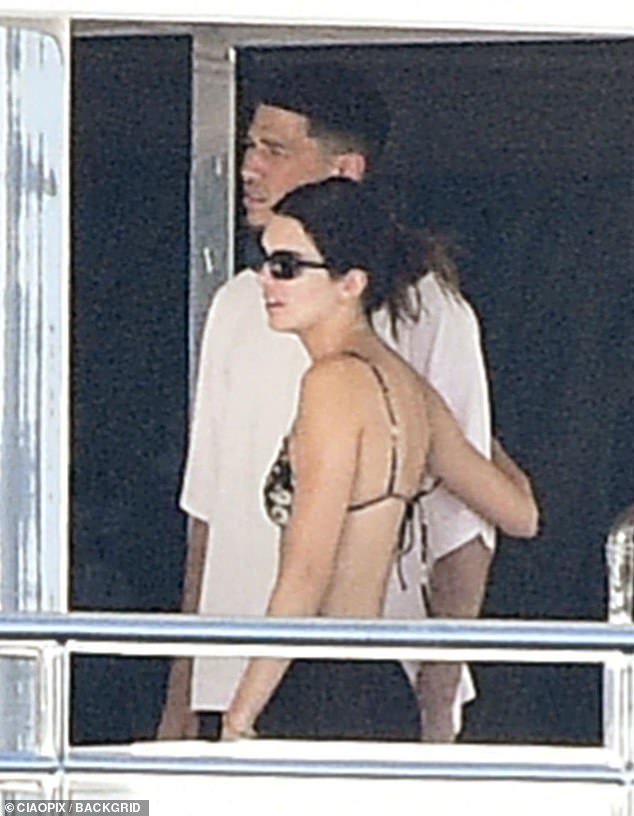 Tour de love! The pair took their love overseas as they enjoyed vacation together sailing around Positano, Nerano, Ponza and Sardinia this week; pictured August 20

My narcissist mother made my life a misery - so why did I fall apart when she died...