There certainly appears to be plenty of amore between Kendall Jenner and her NBA superstar boyfriend Devin Booker.

The 25-year-old model and tequila mogul took to Instagram on Monday to share several snaps from her vacation in Italy with the 24-year-old Phoenix Suns shooting guard.

The photo dump included a very sweet duo of snaps of Devin hugging Kendall from behind featuring the very picturesque Amalfi Coast at sunset in the background. 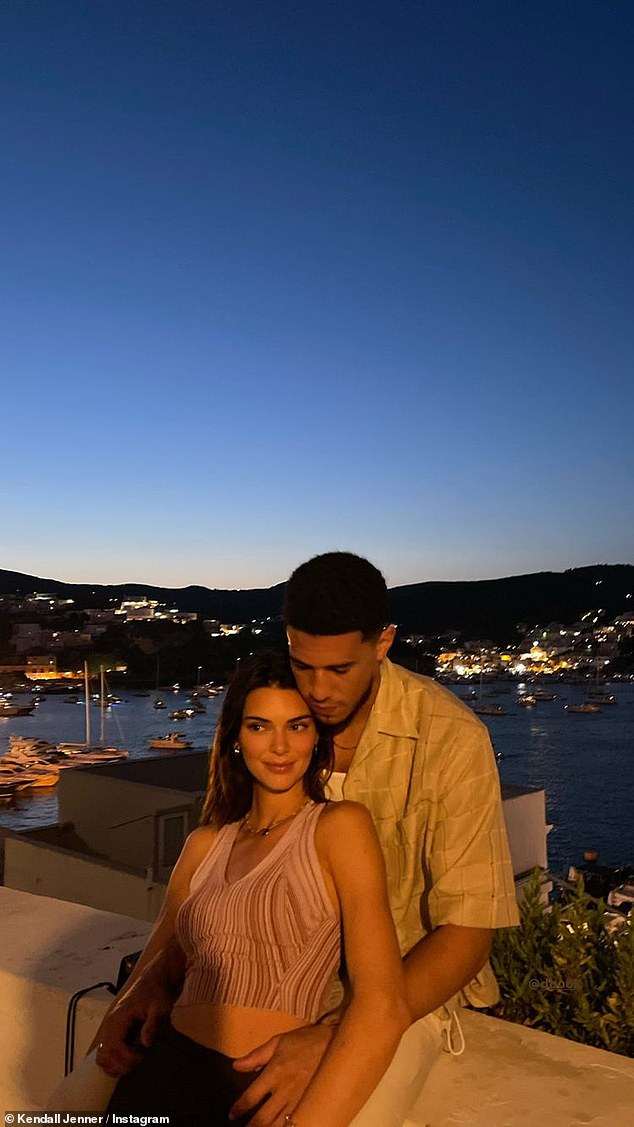 Sweet: Kendall Jenner posted cute snaps of herself cuddled up with NBA superstar beau Devin Booker on their Italian vacation onto Instagram on Monday

The 818 Tequila founder definitely had that look of love as she smiled while the two-time NBA All-Star put his face close to hers.

She sported a patterned crop top with brown maxi skirt while out and about.

Her signature brunette tresses were worn down as she showcased her natural looks by wearing minimal make-up. 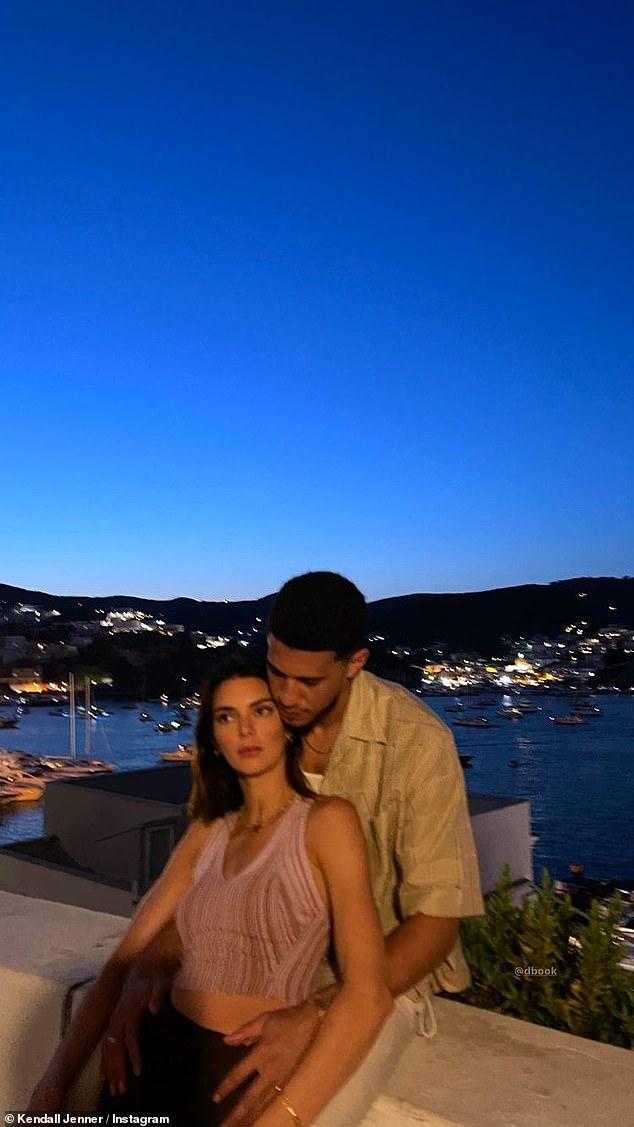 Loved up: The photo dump included a very sweet duo of snaps of the 24-year-old Phoenix Suns shooting guard hugging the 25-year-old model from behind featuring the very picturesque Amalfi Coast at sunset in the background 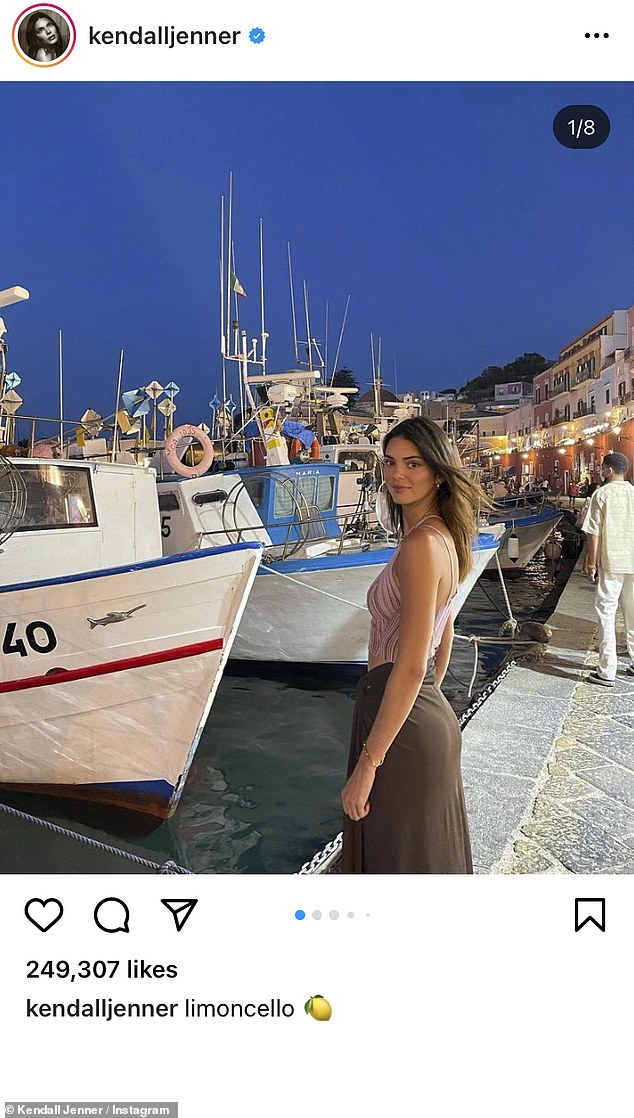 Wow factgor: She sported a patterned crop top with brown maxi skirt while out and about

Kendall also shared several other snaps from the trip including a few from a yacht.

The couple enjoyed the trip to Italy last month as they enjoyed a few stops along the Mediterranean including one in Capri. 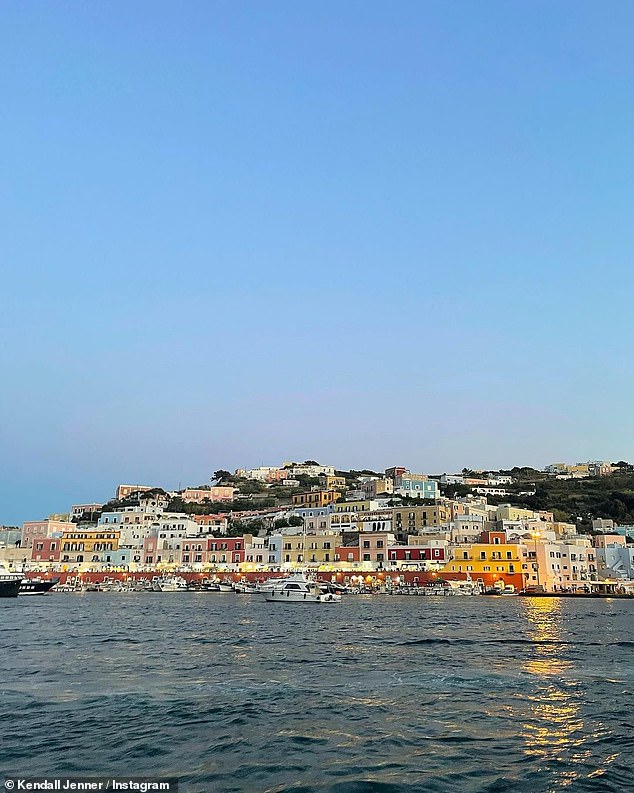 Cruising: Kendall also shared several other snaps from the trip including a few from a yacht 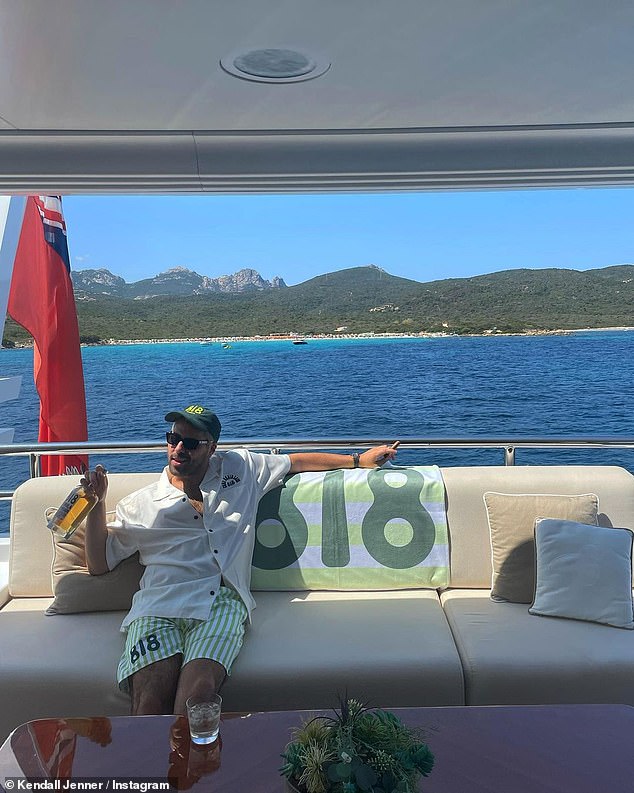 Free advertising: She shared a snap of her pal Mikey Chetrit on the boat completely decked out with 818 Tequila gear 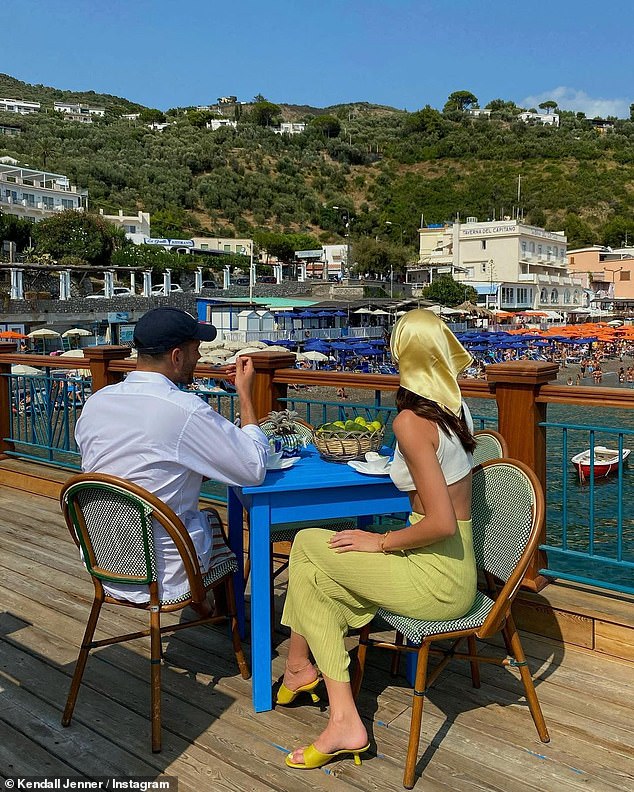 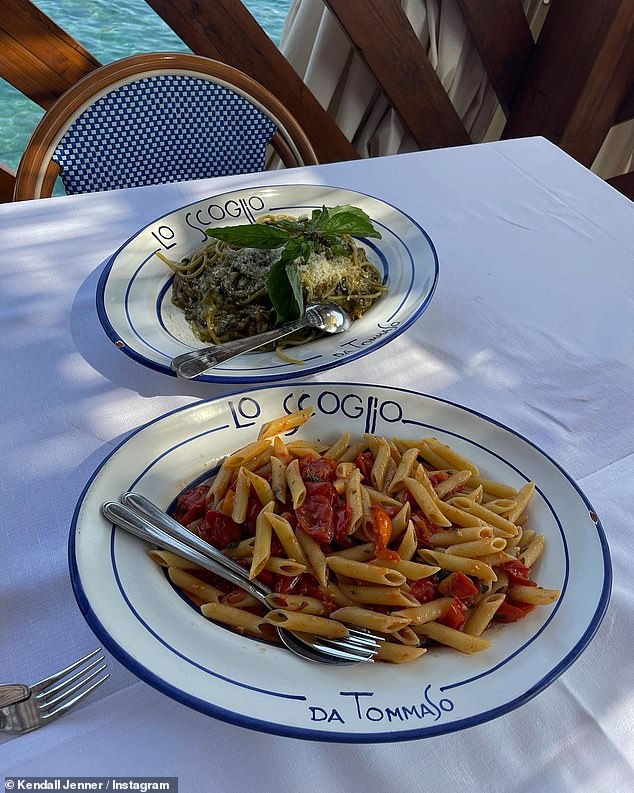 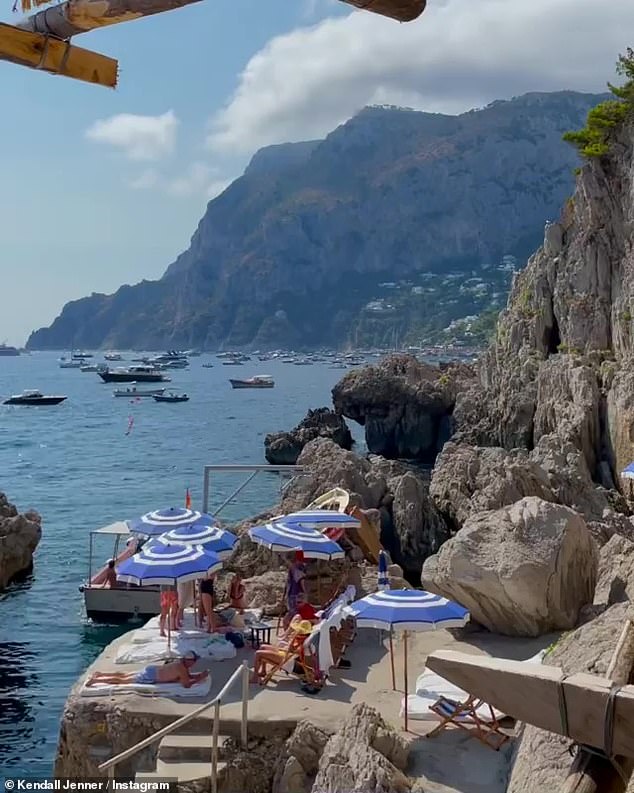 Views: No doubt it was an amazing trip 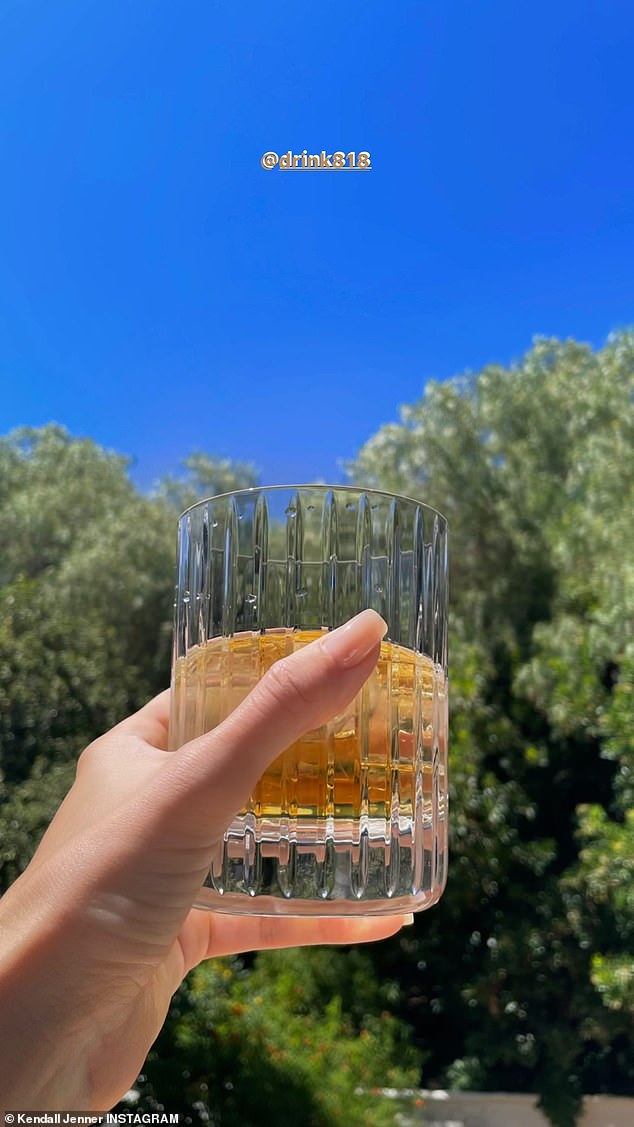 Raise a glass: She also promoted her recently-launched spirits brand

The two have been dating for over a year and as Booker has spent extended time in Los Angeles both during and after the NBA season over the last year, he has spent time with the Kardashian clan on several occasions.

A source told E! back in June that he has the seal of approval from her family. ‘Her family loves him and knows how good they are for one another. They love having Devin around and have welcomed him with open arms.

‘They love seeing Kendall so happy with someone who brings out the best in her. It’s exciting for everyone to see her in such a great relationship,’ the insider continued to say. 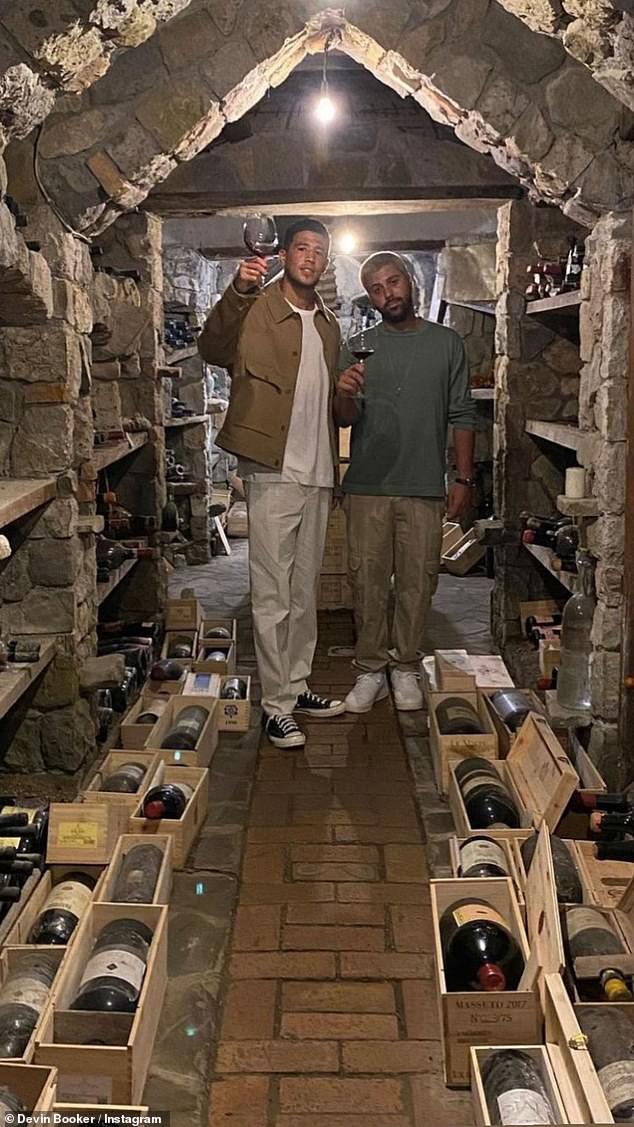 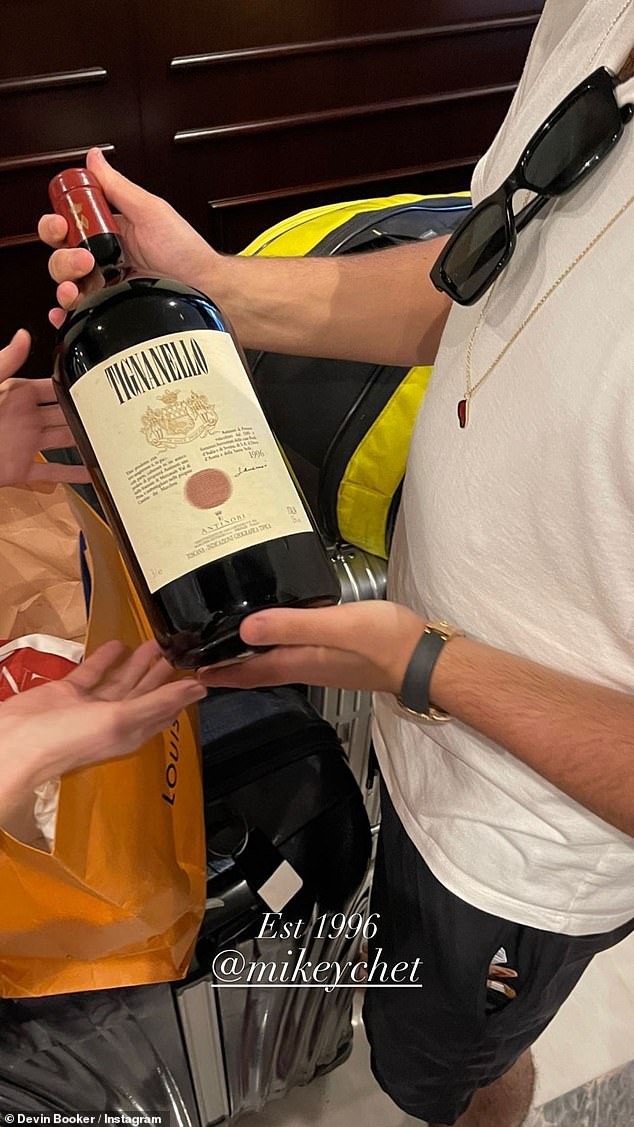 The good stuff: Devin showed off a huge vintage 1996 bottle of red wine from Antinori Tignanello 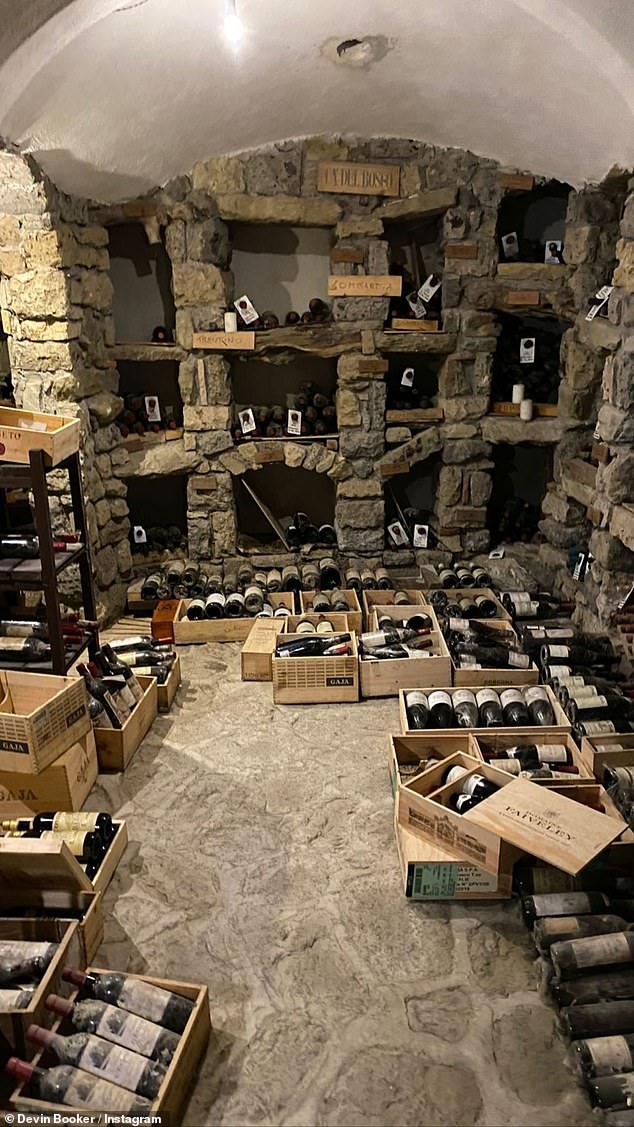 Holy grail: Devin was excited to show off the cellar full of vintages

The couple first met in 2018 and were spotted on a double date together with different people, as the model was seeing NBA player Ben Simmons at the time and Booker was linked to Kylie Jenner’s ex BFF Jordyn Woods.

In April 2020 Kendall and Devin were first seen out one on one during a road trip to Sedona, Arizona and by June the pair were revealed to be ‘hooking up’ but it was said that it was nothing ‘serious.’

The two had kept their romance relatively private but in February they paid tribute to each other on Valentine’s Day and by June they had reached one year together.

It was revealed by Keeping Up With The Kardashians producer Farnaz Farjam on the Daily Dish podcast that he never made an appearance on the family’s hit E! show because Kendall had a one year ‘rule.’ 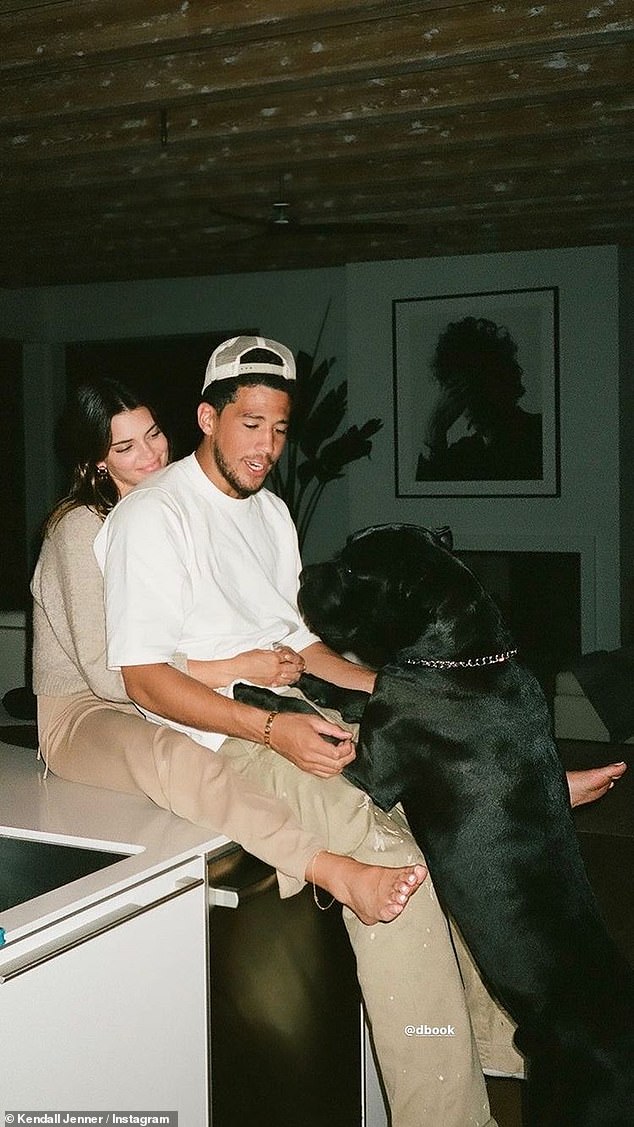 One year together: The couple celebrated their one year anniversary in June 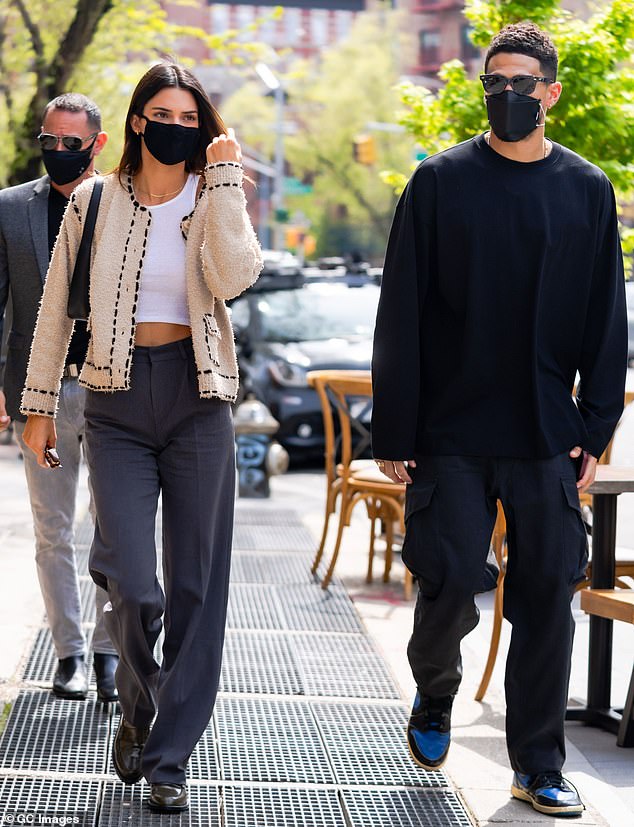 Taking things as they come: ‘They’re not putting any sort of pressure on things for the future,’ a source told ET of the relationship getting more serious; pictured April 2021

‘Kendall’s always had this rule — she just felt like she had to be with someone for at least a year before she lets them be a part of the show, because she doesn’t always know what people’s intentions are.’

And on the series reunion she maintained that she values privacy. ‘I think it makes my life a lot easier and our relationship a lot better, to be completely honest. I just feel like it’s a private matter, it’s not really for anybody else to judge or know.’

Though the two are reportedly ‘crazy about each other,’ an insider told ET that they’re ‘taking things as they come,’ and aren’t stressing about the future.

‘They’re not putting any sort of pressure on things for the future. They realize they’re both still young and have big futures ahead of them. Right now they’re just enjoying their time together and taking things as they come.’ 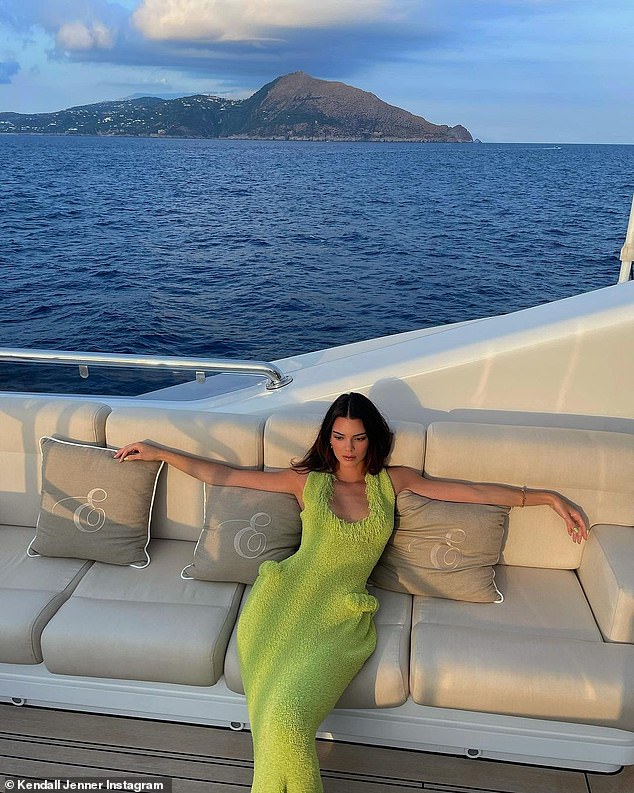 Romantic getaway: A snap shared by Kendall last month during their trip to the Amalfi Coast

The US will prevent the entry of Ortega officials

Gary Payton II is emerging as one of the most spectacular players of the NBA season. The son of the legendary 'Glove' has been slow to earn a...

The New Orleans Pelicans deepened the New York Knicks' crisis by winning their visit to Madison Square Garden by 102-91. Willie Green's men broke the match thanks to...

Ethe name of Chris Duarte It didn't take long for him to make himself known in the NBA. In fact, in his first game he already made history...

Phoenix shows its solvency by coming back in Dallas

The Suns showed last night that they are a couple of steps ahead of Dallas. It was a close game, one in which the Mavericks dominated for long...

The relationship between the Nets and Paul Millsap is coming to an end. As reported by Shams Charania of The Athletic, player and team have reached an agreement...

The US will prevent the entry of Ortega officials