She’s been cheering on her boyfriend Devin Booker as his Phoenix Suns play against the Milwaukee Bucks in the NBA Finals.

And Kendall Jenner made her support public on Saturday when she shared photos of herself in a colorful Phoenix Suns windbreaker.

The 25-year-old Keeping Up With The Kardashians star showed off a playful soft smile as she snapped mirror selfies of herself being swallowed up by the oversize jacket. 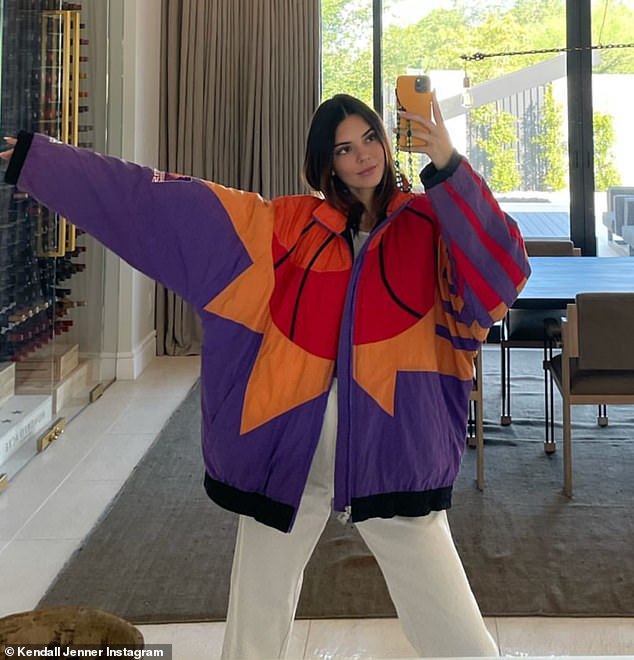 Moral support: Kendall Jenner, 25, was swallowed up in an oversize Phoenix Suns jacket as she supported her boyfriend Devin Booker on Saturday ahead of Game Five of the NBA Finals

Kendall’s coat had the Suns’ recognizable basketball/sun logo against a purple background, with her head popping out in the middle of the ball.

The jacket may have belonged to her 6ft5in boyfriend, as it hung down on her hips and only her fingers reached out of the voluminous sleeves.

The catwalk star kept the rest of her ensemble muted, with a white top that was just barely glimpsed underneath the jacket and a set of baggy white pants.

She had her dark tresses styled straight and parted down the middle. 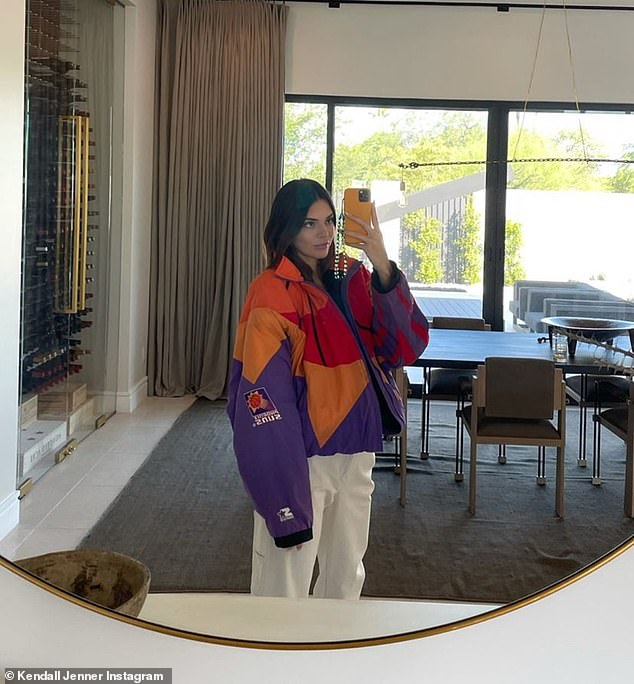 Muted style: Kendall posted the photos of herself in the large jacket to her Instagram Stories. She also had on a simple white time and baggy white pants

Kendall’s photos showed her in front of a dining table by a large outdoor balcony, while a wine cellar was seen behind floor-to-ceiling glass doors to her side.

It wasn’t clear if the model was still in Los Angeles, or if she had traveled to Phoenix to support Devin.

The athlete performed admirably against the Bucks in Game Five, scoring a game-high 40 points, with his teammates allowing him to dominate the game.

However, the Bucks narrowly inched ahead 123–119, giving them three wins so far to Phoenix’s two.

The teams will travel back to Milwaukee for Game Six on Tuesday, where the Bucks could potentially clinch the the Finals win. 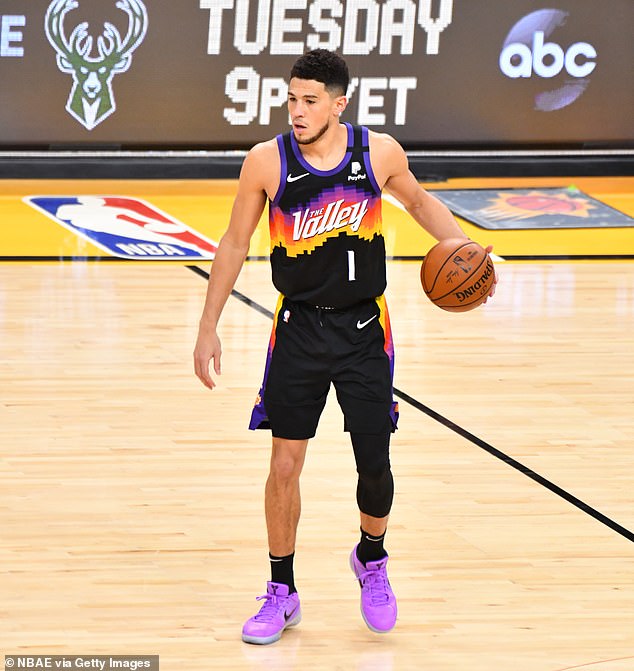 Leading his team: Her boyfriend Devin Booker performed admirably in Game Five of the NBA Finals against the Milwaukee Bucks, scoring a game-high 40 points 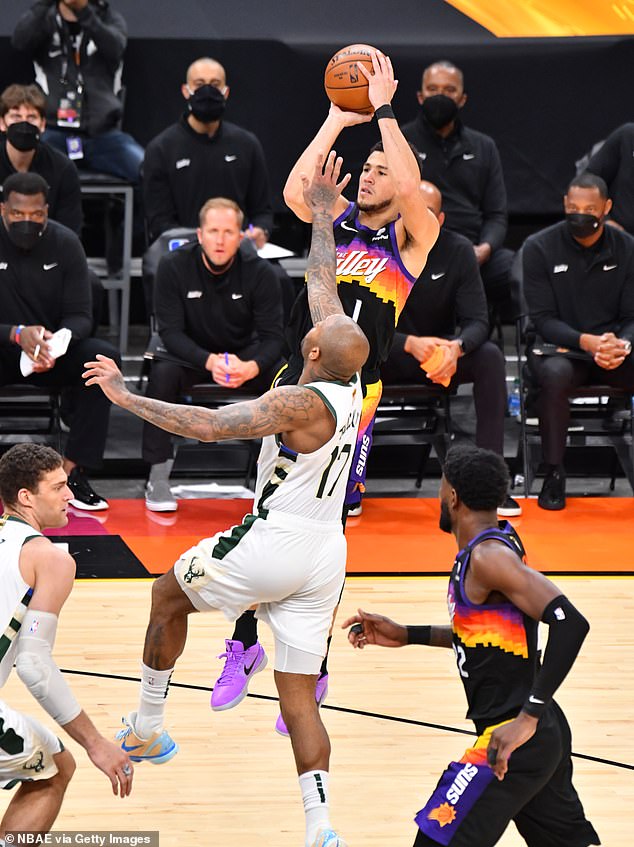 Not quite: However, it wasn’t enough to beat the Bucks, who won 123–119. Milwaukee will win the finals if they’re able to emerge triumphant in the next game, which will be held Tuesday in Minnesota

Kendall and Devin were first linked back in April of 2020, when they were spotted together on a road trip through Arizona.

It was until August of that year when they were spotted in public again, this time for dinner at the Kardashian–Jenner favorite Nobu Malibu.

Kendall went Instagram official with the NBA star in February with some sweet photos of them being affectionate.

Last month, KUWTK producer Farnaz Farjam revealed to Bravo’s The Daily Dish podcast that Devin and her previous boyfriends were never featured on her long-running reality series because she wanted to be certain that it was a serious relationship.

‘Kendall’s always had this rule — she just felt like she had to be with someone for at least a year before she lets them be a part of the show, because she doesn’t always know what people’s intentions are,’ Farjam explained.

‘So, that’s why we kind of kept her personal life out of it, just because she had a rule.’ 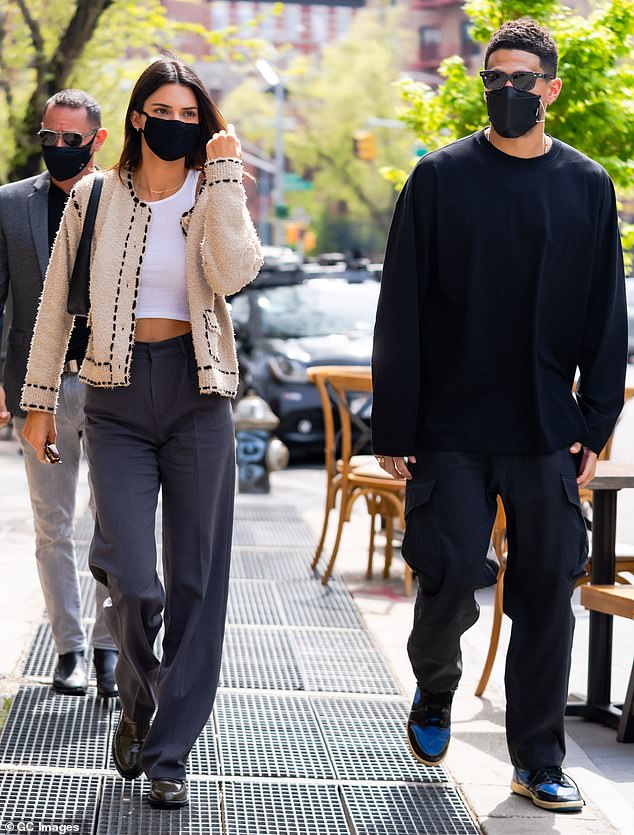 Taking their time: Kendall was first linked to Devin when they were seen on an Arizona road trip in April 2020, but they didn’t go Instagram official until February 2020; seen in April in NYC

Last month marked the end of the series, which made stars out of Kendall and her four sisters.

During the reunion special, hosted by Andy Cohen, Kendall talked about ‘how hard I worked and work’ to establish herself as a model amid her reality TV stardom.

‘I did everything that I was supposed to do and had to do to get to the position I’m at now as a model,’ she insisted in the face of criticisms that she has had an easier time become a star model thanks to her reality series exposure.

‘I went to every single casting, ran all over not only New York City but all over Europe trying to get a job and make my way,’ she added.

‘Of course I had a platform, I never took that for granted. I always knew that was there,’ she confessed.

‘That almost made my job a little bit harder only because people probably didn’t want to hire me because I was on a reality TV show.’ 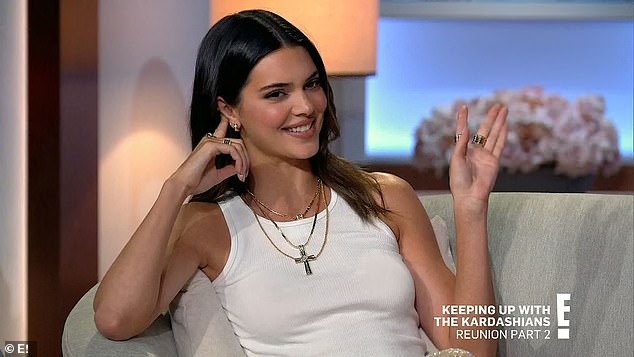 End of an era: Last month marked the end of her long-running reality show Keeping Up With The Kardashians with a two-part reunion episode 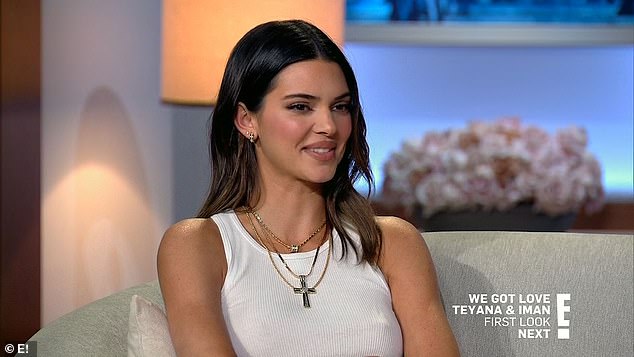 No leg up? Kendall vehemently denied that her fame from KUWTK helped her to rise to the top ranks of elite fashion models

Why I am buying USD/ZAR after the SARB decision.