Kentucky motorists are bamboozled by a new roundabout

Driving in circles! Motorists in rural Kentucky struggle to negotiate their first roundabout in aerial footage

Motorists in rural Kentucky have been baffled after a roundabout was installed in Rowan County.

The road feature, which is very common in Europe, is rarely seen in rural America which is a cause of the chaos.

The footage shows pickup trucks – some of them towing large trailers – approaching the roundabout in the wrong lane and driving through the intersection in the wrong direction.

Officials installed the roundabout at the intersection of routes 60 and 801, outside Morehead, to reduce the number of serious accidents  at the previous four-way junction. 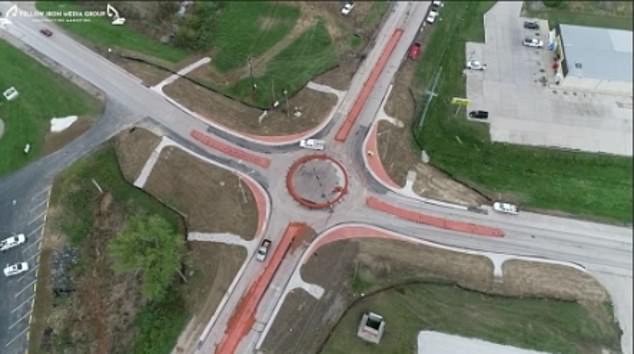 Motorists in rural Kentucky have been baffled by the installation of a roundabout in Rowan County, which is used by 4,000 people a day 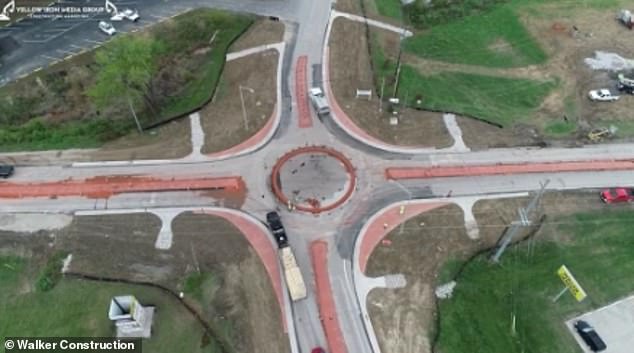 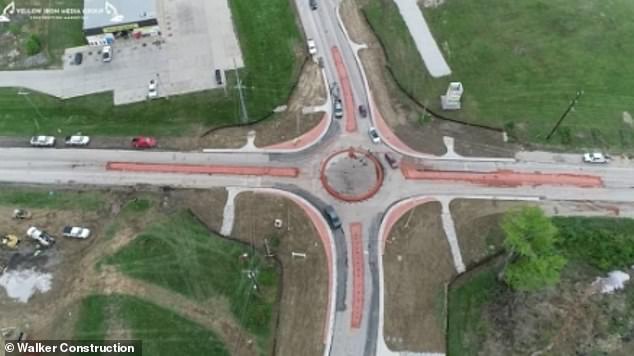 Several cars in this image are using the roundabout in the wrong direction, increasing the chance of a collision

Before the roundabout, the road was a simple four-way junction which caused a significant number of crashes with cars and trucks failing to stop and crashing at high speed.

Aerial footage of the junction shows several drivers approaching the roundabout in the wrong lane and driving in the wrong direction through the intersection.

An estimated 4,000 motorists use the junction every day and the confusion has been caused by the lack of roundabouts in the United States.

It is believed there are approximately 7,100 roundabouts across the entire nation – meaning many motorists never come across one during their entire driving career.

According to local television station WKYT, the new junction was designed as a road safety measure.

Allen Blair of Kentucky Transportation Cabinet District 9 told the station: ‘We’re looking at a way to reduce the severity of crashes that this intersection has a history of.

‘One of the key things that we looked at with this intersection was making sure that trailers, if you have a boat trailer or long RV, would be able to navigate the intersection very easily just like they do now. So with this drivable central island in a mini roundabout, we will be able to accommodate that traffic.’

Motorist Marilyn Freidhof said: ‘It’s a four-way stop, so you have to keep an eye out for everybody else that’s coming across that intersection. I haven’t seen any of the T-bones but I’m sure they would be terrifying,’

Local business owner Adam Ferguson welcomed the improved junction. He added: ‘A lot of the locals are pretty apprehensive about the roundabout. I guess it’s because it’s something new. But I think it’ll be better.’

The roundabout opened on Monday night and was completed by Walker Construction, who produced their own video to advise motorists about how to use the junction safely.

Jason Wishman of Walker Construction said: ‘Considering the location right where it’s a big lake and everything and a lot of traffic, it was doing just fine. I’ve seen several first hand accounts that it’s just not going to work out.