Chelsea have the potential to be mesmerising at the top of the pitch.

Their third goal against Southampton was magnificent, as Timo Werner and Mason Mount exchanged a one-two and Kai Havertz scored.

With Christian Pulisic fit again and Hakim Ziyech ready to play, the pieces of the puzzle are all there – Frank Lampard just has to put them together. 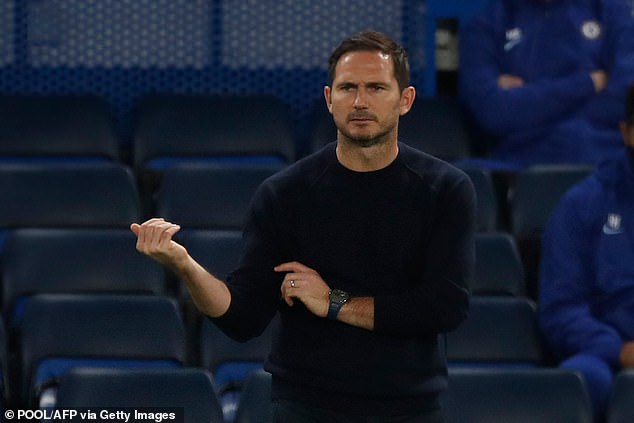 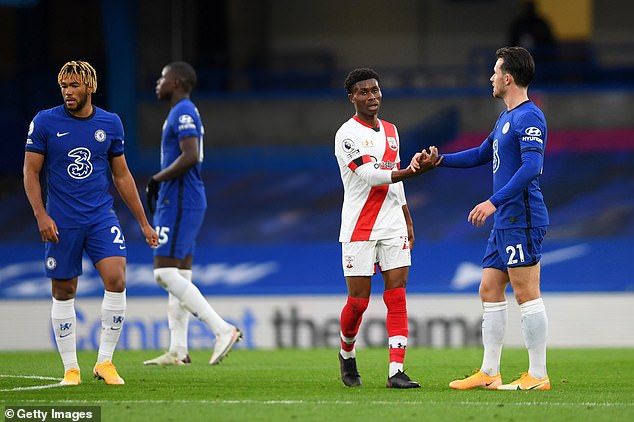 But Chelsea’s manager has work to do with his defence first. Last weekend’s 3-3 draw at Stamford Bridge took them to 63 goals conceded in 43 Premier League games under Lampard.

What has stood out is the mannequin-like ball-watching from Chelsea’s defenders. They stand around admiring the pretty football being played in front of them rather than preparing for when they lose possession.

They’ve had the cigars out, and that mentality has to change. Lampard’s message to his defenders has to be: ‘Get into position early and expect the forward players to lose possession at any moment.’

Ralph Hasenhuttl’s Southampton are one of the best at pressing. They like to win the ball back and pounce – and that was how they got their first goal.

Andreas Christensen left the back line to press a throw-in and Havertz picked up possession. Yet instead of racing back to rejoin Kurt Zouma like he should – or noticing Danny Ings over his shoulder – Christensen started walking. 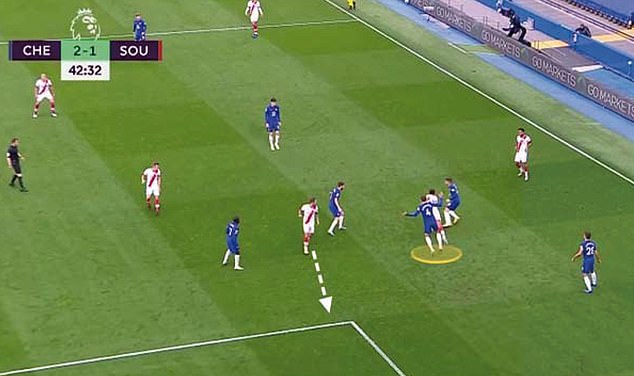 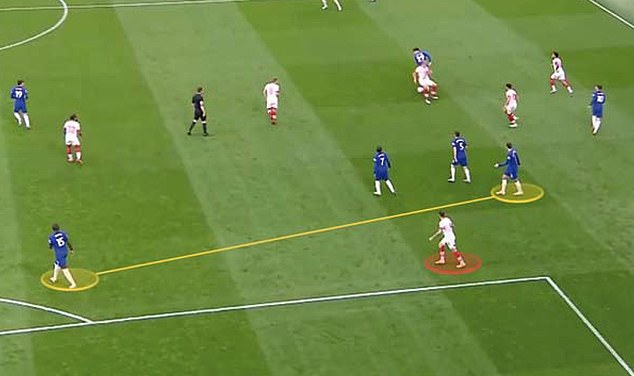 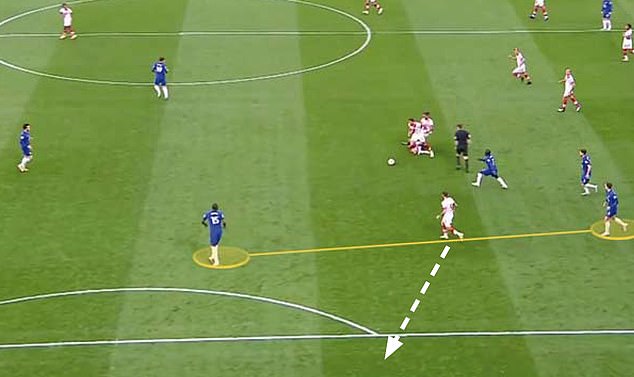 …Southampton then win possession and Ings has plenty of space in between the Chelsea centre backs to receive the pass and score.

When Havertz loses the ball in midfield, Chelsea’s players are practically stood there with arms folded. Christensen tries to get back, but it’s too late.

By the time he is even on the edge of the box, Ings is going around Kepa Arrizabalaga to score.

For Southampton’s second goal, Zouma messes up a back pass, but the positioning of Chelsea’s defence is all wrong again.

Zouma is isolated, and Christensen is watching when he should be anticipating the worst-case scenario. Individual errors are made, and Southampton equalise.

As a defender, you have to be on red alert at all times. At Arsenal, I was lucky enough to work under Don Howe. I couldn’t have asked for a better apprenticeship. 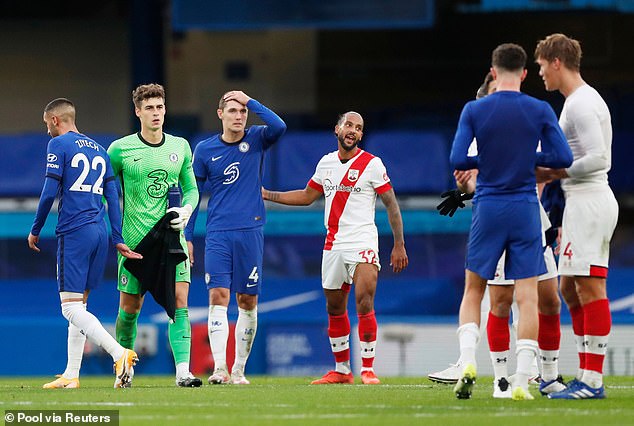 Don was the governor of defending and we were taught: ‘If you work early, you work less.’

Where’s the ball? Where’s my opponent? Where’s our defensive line? You have to assess, shuffle across, drop off – and it is imperative you do this before your team loses the ball. If you don’t bother getting into position, then the opposition can and will hurt you at this level.

That’s what Chelsea’s defenders need to learn. It is about knowledge, awareness and not being naive. Ings knew what he was doing, drifting between Christensen and Zouma, because he was expecting his Southampton team-mates to win the ball.

Lampard hopes the experience of Thiago Silva can help but at 36 years old, it remains to be seen if he can cope with playing every week.

Chelsea’s forwards will get the majority of the credit when they win. Defenders only tend to hit the headlines when they’ve had a nightmare at the back! But you have to pride yourself on securing that clean sheet. 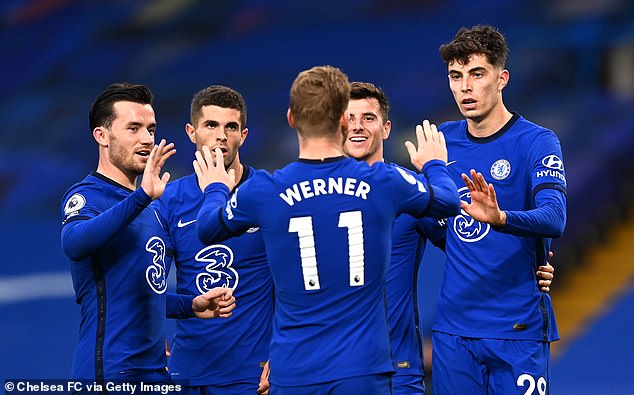 Thierry Henry and Dennis Bergkamp used to do marvellous things up top for Arsenal. But our back line wasn’t made up of spectators. We did our jobs.

Chelsea’s players need to wake up and stop their sleeping at the back. Do that and this team, with Werner central and the vast array of attacking talent around him, can be seriously competitive.

Rashford could do the damage if given the chance

Manchester City have endured their worst start to a season since 2014, while Liverpool have lost Virgil van Dijk.

If someone is to crash the top-two party, Chelsea and Manchester United will believe they should be at the front of the queue. 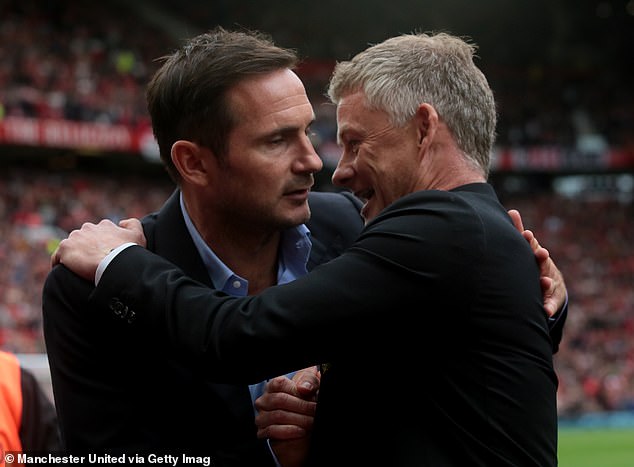 United faced Chelsea four times last season and won three of them, primarily by using the same 3-4-1-2 that defeated Paris Saint-German on Tuesday. I felt Solskjaer’s players weren’t fit at the start of this campaign.

That short holiday break after their Europa League exit didn’t seem to help, and the opening-day defeat by Crystal Palace placed the manager under immediate pressure. That’s the way it is at United.

But now, Solskjaer’s players look like they are fit again. They scored three times after the 86th minute at Newcastle last week, and out-played PSG in midweek. 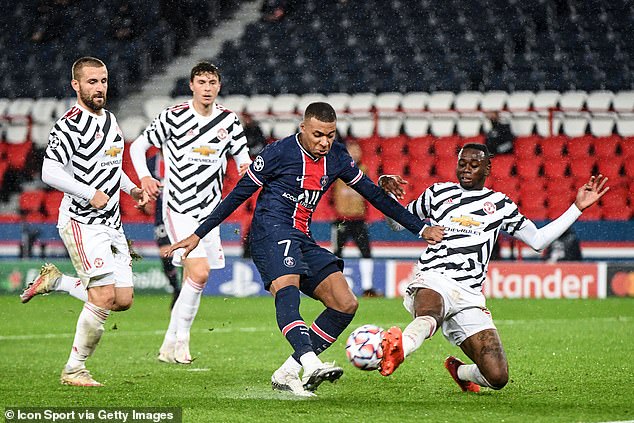 Aaron Wan-Bissaka deserves a special mention for his performance – his tackles on Neymar and Kylian Mbappe were as precise as a surgeon with a scalpel.

It was Marcus Rashford who scored United’s late winner in Paris, and he could do real damage to Chelsea’s defence if they act like mannequins again. Bruno Fernandes can play fabulous balls behind the opposition for Rashford or Anthony Martial, and the statistics say no Premier League club has scored more goals from quick breaks than United this season.

One of those breakaways was at Brighton. Fernandes set free Rashford and the 22-year-old forward did the rest, finishing off a fine counter-attack. Chelsea recorded their fewest attempts on goal in a Champions League game since February 2015 in their 0-0 with Sevilla on Tuesday. 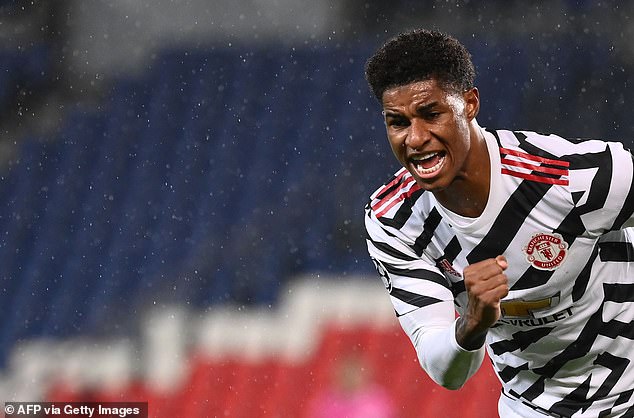 Maybe that was Lampard trying to make his team compact. He wants to find a winning formula at the front and back. But if his defenders don’t get into position early enough today, United have the players to take advantage.

This has all the makings of a fascinating battle between two great teams aiming to muscle their way back to the top of the domestic pile.