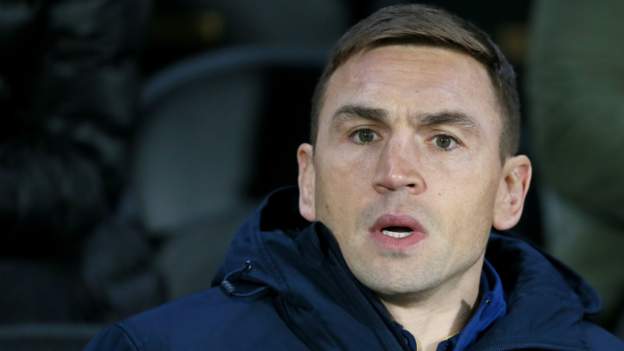 Sinfield took part in a marathon fundraiser to support former team-mate Rob Burrow, who has MND, this month.

But he says it is important not to “guess and try to make assumptions”.

In 2018, a study of 25 retired players from Australia’s National Rugby League (NRL) found repeated head injuries suffered during their careers had left them with long-term impairments.

However, Sinfield, who is now the Rhinos’ director of rugby, said: “We need to do a lot more research on it. We need to actually get the answers and make sure it’s thorough so we can make the necessary adjustments, if any are needed.

“At the Rhinos, we’ve invested in some mouthguard technology to do with concussion.

“It’s really important that the whole area is researched properly and we get some answers, rather than guess and try to make assumptions.”

Sinfield was Leeds captain for the majority of Burrow’s 17-year career with the Headingley side.

Burrow was diagnosed with MND in 2019, two years after retiring. He has now lost the ability to talk naturally and uses a wheelchair.

“I have spent some time with both of them in the past and it’s really tragic the story and the journey that both those players are on.”

Asked if it was something which preoccupied his current players, Sinfield said: “I don’t think so. It certainly wasn’t in my mind as a player. You understand some of the risks to your body when you play.”

‘We were providing a little glimmer of hope’

Sinfield ran seven marathons in seven days in a bid to raise £77,777 for the Motor Neurone Disease Association and Burrow.

The amount stood at £1.2m by the time he completed his seventh run and has now climbed to over £2.6m.

“We understood that we were providing a little glimmer of hope, and it’s really important for the whole MND community to let them know that people care,” said Sinfield.

“This only started out as a fundraiser for Rob and the MND Association, but what it’s turned into has been much greater than that.

“We’re all truly humbled and I can’t thank people enough for their support and generosity in what has been a tough year for everybody.”