F1 driver Kimi Raikkonen is forced tackle blaze HIMSELF after he is engulfed by a car fire…. weeks after Romain Grosjean miraculously survived a 140mph fireball horror crash

Formula One held its breath once again after Kimi Raikkonen’s Alfa Romeo was engulfed in flames during practice at the Abu Dhabi Grand Prix.

Raikkonen was navigating his way around the Yas Marina circuit when an engine malfunction quickly sounded the alarm and required urgent action, as embers could be seen flashing from the rear of the vehicle.

The Finnish racer could be seen attempting to pull over his Alfa Romeo when it suddenly burst into flames, causing panic to spread among those present. 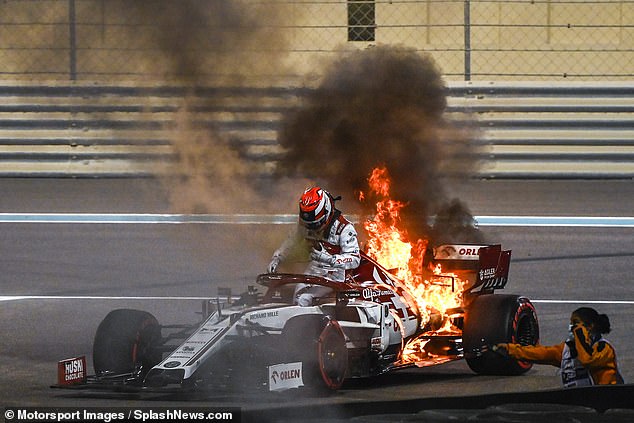 The 2007 world champion pulled off the track and coolly emerged from his cockpit before helping marshals to extinguish the flames.

The session was red-flagged for a dozen minutes as Raikkonen’s chargrilled car was moved to safety.

A text message saved the lives of fishermen when their boat capsized at Port Welshpool, Victoria

Woman busts cheater after noticing another woman’s reflection in photo