Trainer Paul Nicholls says he has plenty left to achieve as he seeks a remarkable 12th win in the King George VI Chase at Kempton on 26 December.

The 58-year-old saddles four of the nine runners, and cannot split his leading duo of two-time winner Clan Des Obeaux and 2019 runner-up Cyrname.

“I don’t think there’s much between them,” Nicholls told BBC Sport.

Santini, for Nicky Henderson, and Colin Tizzard’s Lostintranslation appear to be their chief rivals.

Nicholls also runs Real Steel and Frodon in the Grade One contest, with Black Op, Saint Calvados and Waiting Patiently completing the field.

Nicholls – The King of Kempton

A duel over three miles for the top steeplechasers, the King George has a roll of honour that boasts equine greats such as Arkle and Desert Orchid.

Since the late 1990s, Nicholls has made the race his own with multiple winners See More Business, Kauto Star, Silviniaco Conti and Clan Des Obeaux all sent out from his Somerset stables.

In the last 23 runnings, the victor has been trained by Nicholls 11 times, but he is in no mood to get comfortable.

“I’ve never even questioned or thought about when I might pack up, I couldn’t see it happening.”

“You’re forever looking for the next ones. You just can’t stop, you can’t stand still. It’s like a football squad when some go and you bring others in.”

Nicholls wears his heart on his sleeve. He loves to prove the doubters wrong, such as when Cyrname beat the then champion chaser Altior at Ascot last year.

“He is a seriously good horse and you’ve always got to believe in them even if no-one else does.,” he said.

“All the experts thought he couldn’t win it. Altior was 2-1 on and we were 3-1 and I never had any doubt that we wouldn’t win that day.” 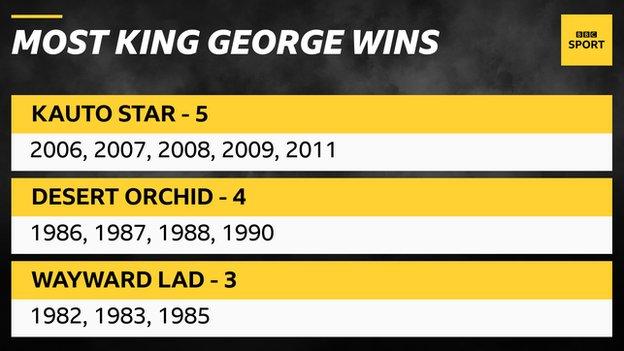 What of this year’s King George?

While Saturday will be Boxing Day or St Stephen’s Day to many people, it is another winner-seeking Saturday for Nicholls.

The occasion willl have a different feel – held behind closed doors, with empty stands rather than a cheery 20,000 crowd.

“When it’s quiet, with hardly anyone there, it will be very very different, but at the end of the day we are putting on a service and a lot of people will get a lot of pleasure following it,” he said.

“On some of those days at Kempton, it has been electric. I remember the buzz it used to create – Kauto Star used to thrive on that. When he won his fifth King George that day, he just thought he was King Kong.”

Clan Des Obeaux, ridden by Sam Twiston-Davies, seeks a third consecutive victory on the back of a promising second to Bristol De Mai in the Betfair Chase at Haydock last month.

Nicholls expects him to improve for that run, but Cyrname to be a lot closer than the 21 lengths which separated the pair last year and to develop into a Cheltenham Gold Cup contender.

He notes that Real Steel ran well when sixth in this year’s Gold Cup and he believes Frodon could potentially finish in the first three of that race next year.

Whatever happens, Nicholls says they will all be given the best chance possible despite different owners.

“There’s no favouritism, they all run on their merits and everybody knows that, which makes life a lot easier,” he said.