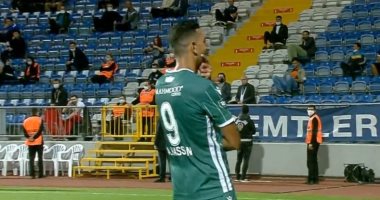 The Turkish Konyaspor team, which includes Egyptian striker Ahmed Hassan Koca, ended the first half of its match against its host Kassem Pasha, leading 2-1, during the match that the two teams are currently gathering at the latter’s stadium, in the seventh round of the Turkish League.

Koca scored Konyaspor’s first goal in the 18th minute during the match in which he is participating for the first time since joining the Turkish team last August.

In the 22nd minute, Radar Guerler scored the second goal for the visitors, before Michal Travnik reduced the goal to reduce the difference for Kassem Pasha in the 29th minute.

Konyaspor occupies sixth place in the Turkish league table with 12 points, while Kasimpasa occupies 16th place with only 5 points.