Koeman: I don’t know anything about my future with Barcelona and the loss is hard to accept 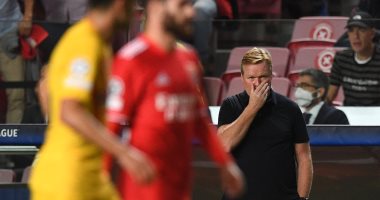 Ronaldo Koeman, coach of the Spanish club Barcelona, ​​​​confirmed that the loss against Benfica, by three goals, is difficult to accept, in the match that brought the two teams together at the “Al-Nour” stadium in the second round of Group E of the group stage in the Champions League competition, pointing out to He does not know anything about his future with Barca.

Barcelona suffered the second consecutive loss in the Champions League this season, after losing to Bayern Munich in the first round at the Camp Nou.

Speaking at the end of the match, Koeman said:The team played well until two goals down. The difference between us and them is that they scored and we did not. We had 4 chances. This is the difference. It is difficult to accept the result. I think the result does not reflect our performance on the field.”

He continued, “We have to defend better, it is true that some teams look better physically than us, maybe that is why we look so soft, it is difficult to accept the result, it does not reflect what we saw on the field, from the few chances they had, they scored 3 goals and we did not score, here.” the difference”.

On his future, he explained: “I will not discuss the issue of the level of the team, I do not know what Roberto said, everyone knows what the problem with Barca is at the moment, it is not possible to give an opinion about a team that is no longer the same as it was before, this matter is clear to me more than a drink of water “.

On what the loss means for him, Koeman said: “If people inside the club do not realize the current situation in Barcelona, ​​I will face a problem, of course we can do better, but we will not win the Champions League.”

Regarding the absences, he said: “What happens to us, I do not see it strange, Braithwaite and Dembele are injured and we do not have a wing, Coutinho is not 100% ready.”

He continued, “I feel great support from the players in front of the management. I do not know, I will not say anything about my future because I do not know what the club is thinking. We will see what happens with regard to my future with the club.”

Koeman continued, “I think that the team was good in some moments of the match. We were superior to them and we did not play badly. Barca is in a stage of a big change, in addition, we are missing a lot of players.”

And he added, “For any coach, it is difficult to be in a team like Barcelona and receive two defeats in the first two matches in the Champions League.”

He continued: “The culprit is the coach, but during many stages of the match, the technique was very good and we were superior to them. We had chances to score two goals, but we were less than them in terms of effectiveness. There is a great lack of physical aspect and speed on the part of the players.”

Regarding Benfica, he explained: “Benfica showed in its local championship that it is a strong team, plays well and creates a lot of danger in front of its opponents. They created many opportunities and managed to score three goals.”

He continued: “If you win, everyone stays calm, if you lose, everyone looks at the coach. We live in a world like this in Barcelona. You have to play well, attack and win matches, but I see Barcelona in the round of 16.”

“If we win the two matches against Dinamo and Bayern perform their usual performance against Benfica, qualifying for the next round will not be a complicated matter for us.”

On Messi’s departure and his injury, Koeman said: “I am tired of repeating it. This is the reality we live in. We have to ask more from our players as well. If we can create 4-5 big chances, we can’t score any chance, we have to score at least two goals.” .

Nunez’s goal is the second fastest goal conceded by Barcelona in the history of the Champions after 133 seconds, after Antonio da Silva’s goal with Stuttgart with 125 seconds in 2007.

In the second half, Portuguese international Rafa Silva added Benfica’s second goal in the 69th minute, before Nunez returned and scored the third goal in the 79th minute from a penalty kick.