Boris Johnson rejected Kremlin claims that he is ‘anti-Russian’ today – and joked that even his name is popular there.

The Prime Minister used a Nato press conference to dismiss personal Moscow attacks linked to growing sanctions on its economy and increasing military aid for Ukraine.

Britain committed to a new package of 6,000 more missiles for Ukraine today ahead of a meeting of the alliance, plus fresh punitive measures against a further 65 individuals and entities.

Among those hit with travel bans and asset freezes were the Wagner Group, a Russian paramilitary organisation accused of plotting to assassinate Ukrainian president Volodymyr Zelensky.

Britain’s response in particular appeared to be riling Mr Putin. Kremlin spokesman Dmitry Peskov was quoted by the state-owned RIA news agency as saying: ‘As for Mr Johnson, we see him as the most active participant in the race to be anti-Russian. It will lead to a foreign policy dead end.’

But speaking this afternoon in Brussels, Mr Johnson said he was no anti-Russian but ‘deeply hostile’ towards leader Vladimir Putin.

And he joked: ‘I think I’m probably the only Prime Minister in UK history to be called Boris, I think I have that distinction, and I’m not remotely anti-Russian.’

He became serious as he added: ‘But I think what we all agree is that what Vladimir Putin is doing, the way he’s leading Russia at the moment, is utterly catastrophic, that his invasion of Ukraine is inhuman and barbaric. 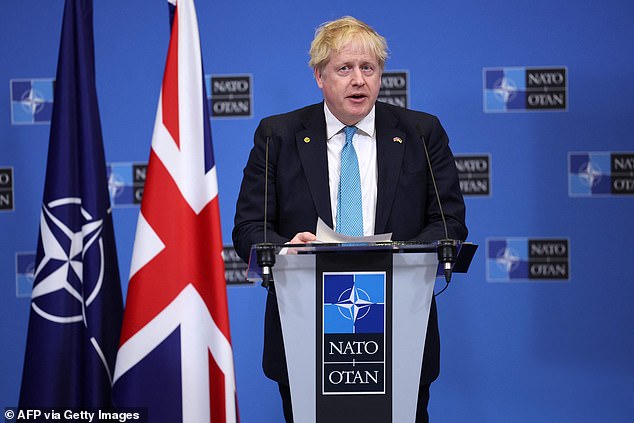 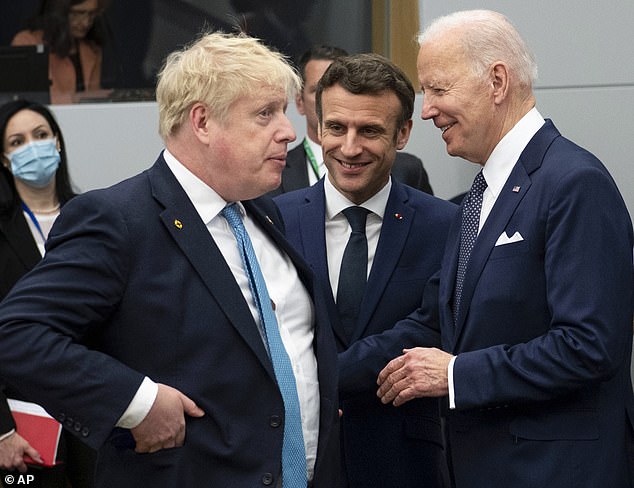 Downing Street said the Prime Minister was instead ‘among the most active anti-Putin leaders’ as he rallied allies at a Nato summit in Brussels to provide more defensive military support to Ukraine. 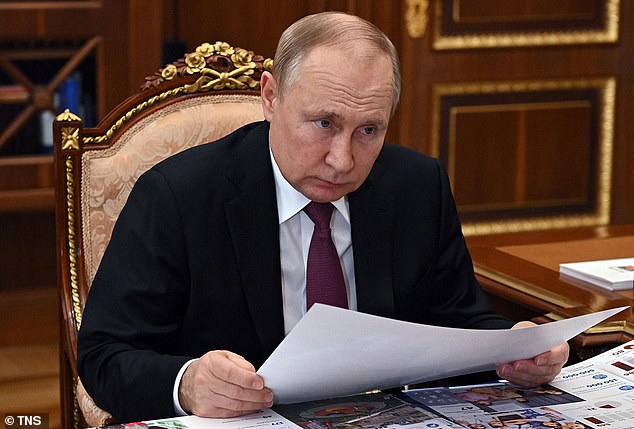 Among those hit with travel bans and asset freezes were the Wagner Group, a Russian paramilitary organisation accused of plotting to assassinate Ukrainian president Volodymyr Zelensky. Britain’s response in particular appeared to be riling Mr Putin

Britain has sanctioned the stepdaughter of Putin’s lapdog Sergei Lavrov as part of a new raft of sanctions on a string of Russian ‘oligarchs, businesses and hired thugs’.

Also among the targets of the new measures announced today are The Wagner Group mercenaries – known as ‘Putin’s private army’ and accused of trying to assassinate Volodymyr Zelensky and other senior Ukrainian politicians. 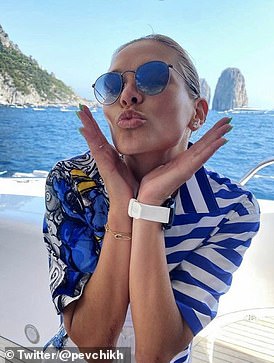 NATO leaders are gathering in Brussels today to discuss the Ukraine War, while Putin’s advance appears to be increasingly stalled after Russia invaded 26 days ago.

Arriving at the summit this morning, Prime Minister Boris Johnson said: ‘We’ve got to tighten the economic vice around Putin, sanctioning more people today, as we are, sanctioning the Wagner Group, looking at what we can do to stop Putin using his gold reserves, and also doing more to help the Ukrainians defend themselves.’

The most prominent target of the sanctions is Imperial College graduate Polina Kovaleva, a glamorous 26-year-old who lives in a £4million home in Kensington.

Polina went to a private boarding school in Bristol before gaining a first-class degree in economics with politics at Loughborough University and later completing a masters in economics and strategy for business at Imperial College London.

She went on to work for Gazprom, the Russian energy giant, where she helped with mergers and acquisitions and later worked at Glencore, the mining company. Before buying her own home, she lived in Holland Park, west London, in an apartment in a townhouse that is owned by the Russian embassy.

Records show that the nearby Ukrainian embassy alleged Russia had wrongly claimed ownership of the property.

Polina now lives in an apartment, which Land Registry documents state she purchased for £4.4million with no mortgage in 2016, when she was 21, in a block just off Kensington High Street. It is still unknown who paid for Polina’s flat. She shares the apartment with a man, believed to be her partner, who also has a 10 per cent stake in the investment company she now runs.

The property is part of an award-winning development offering a swimming pool, gym, spa, cinema, golf simulator, games room and views across Kensington and Holland Park.

Polina’s mother is reported to be Svetlana Polyakova, 51, a powerful member of the Russian Foreign Ministry who accompanies Lavrov on every foreign trip and has had a relationship since the early 2000s. It is rumoured that she is Lavrov’s unofficial wife.

‘And the conduct of that invasion is now moving into the type of behaviour that, as I said before, we haven’t seen in the continent of Europe for 80 years, and it’s horrific.

‘So you can be sympathetic towards ordinary Russians, who are being so badly led, but you can be deeply hostile to the decisions of Vladimir Putin.’

The Foreign Office said this morning a total of 1,000 fresh sanctions have been handed out since the invasion begun, with the new round including Russian billionaire Eugene Shvidler and Galina Danilchenko, who was installed by Moscow as the mayor of occupied Melitopol in south-east Ukraine.

Mr Zelensky was to remotely address the meeting which is expected to sign off on the formation of four new battlegroups in eastern Europe, adding thousands more troops. US President Joe Biden was present.

Western officials had expected to be supporting a Ukrainian insurgency at this point in the war, rather than the nation’s army as it puts up a fierce resistance.

Mr Johnson said: ‘We’re moving, really, from a programme of supporting resistance to supporting the Ukrainian defence of their own country.’

Praising him as ‘one of the most extraordinary war leaders of recent times’, Mr Johnson said Mr Zelensky wants tighter sanctions on Mr Putin’s regime and ‘very specific defensive military support’ for his armed forces.

‘And that, we’re determined to provide,’ Mr Johnson said.

He also hit out at Moscow’s bid to host Euro 2028, saying Russia should withdraw its forces and the football tournament should be handed to Ukraine.

‘The idea of Russia holding any kind of football tournament or any kind of cultural event right now is beyond satire,’ he said.

‘The best thing possible would be for the entire Russian armed forces to retire forthwith from Ukraine and to hand it to them, of course.’

However, those remarks came just a day after the UK and Ireland football associations submitted their joint formal interest in staging the tournament.

Downing Street said Mr Johnson was responding to a question about Moscow’s ‘brazen and sorely misjudged’ attempt to obtain a platform on the international stage by hosting the tournament.

‘Clearly we remain entirely committed to the UK and Ireland bid for Euro 2028 which retains the Government’s full backing,’ the Prime Minister’s official spokesman said.

Six more banks were among those being sanctioned with asset freezes and travel bans, as was one of the world’s largest diamond producer Alrosa, and Polina Kovaleva, the stepdaughter of Russian foreign minister Sergei Lavrov.

Foreign Secretary Liz Truss, who was travelling with Mr Johnson, said: ‘These oligarchs, businesses and hired thugs are complicit in the murder of innocent civilians and it is right that they pay the price.

‘Putin should be under no illusions – we are united with our allies and will keep tightening the screw on the Russian economy to help ensure he fails in Ukraine. There will be no let-up’.

Ahead of the summit getting under way, Russian hoaxers, suspected of working for the Kremlin, released a full version of their video call with Defence Secretary Ben Wallace.

The MoD has warned the footage being trickled out, in which Mr Wallace thought he was talking to Ukrainian prime minister Denys Shmyhal, is doctored and propaganda.

Speaking to the imposter, Mr Wallace says: ‘I’ve just been looking at our new anti-air missiles that we’re sending you, which is better than Stinger, it’ll work at night, it’s a very, very fast missile and it will help close the skies to Russian aircraft.’

Nato has refused Ukrainian demands for a no-fly zone to be imposed over the nation out of fears it would drag the West into a direct conflict with Russia.

The hoaxers warned that a ‘prank’ call with Home Secretary Priti Patel will follow ‘soon’.

It is also supplying and training Ukrainian troops in the use of Starstreak high-velocity anti-air missiles as well as providing body armour, helmets and combat boots.

The Government will provide an additional £4.1 million to the BBC World Service to counter disinformation in Russia and Ukraine as well as new support for the International Criminal Court (ICC).

NBA: Quin Snyder, coach of the Utah Jazz, criticizes the rumors that place him in the Los Angeles Lakers as “disrespectful”