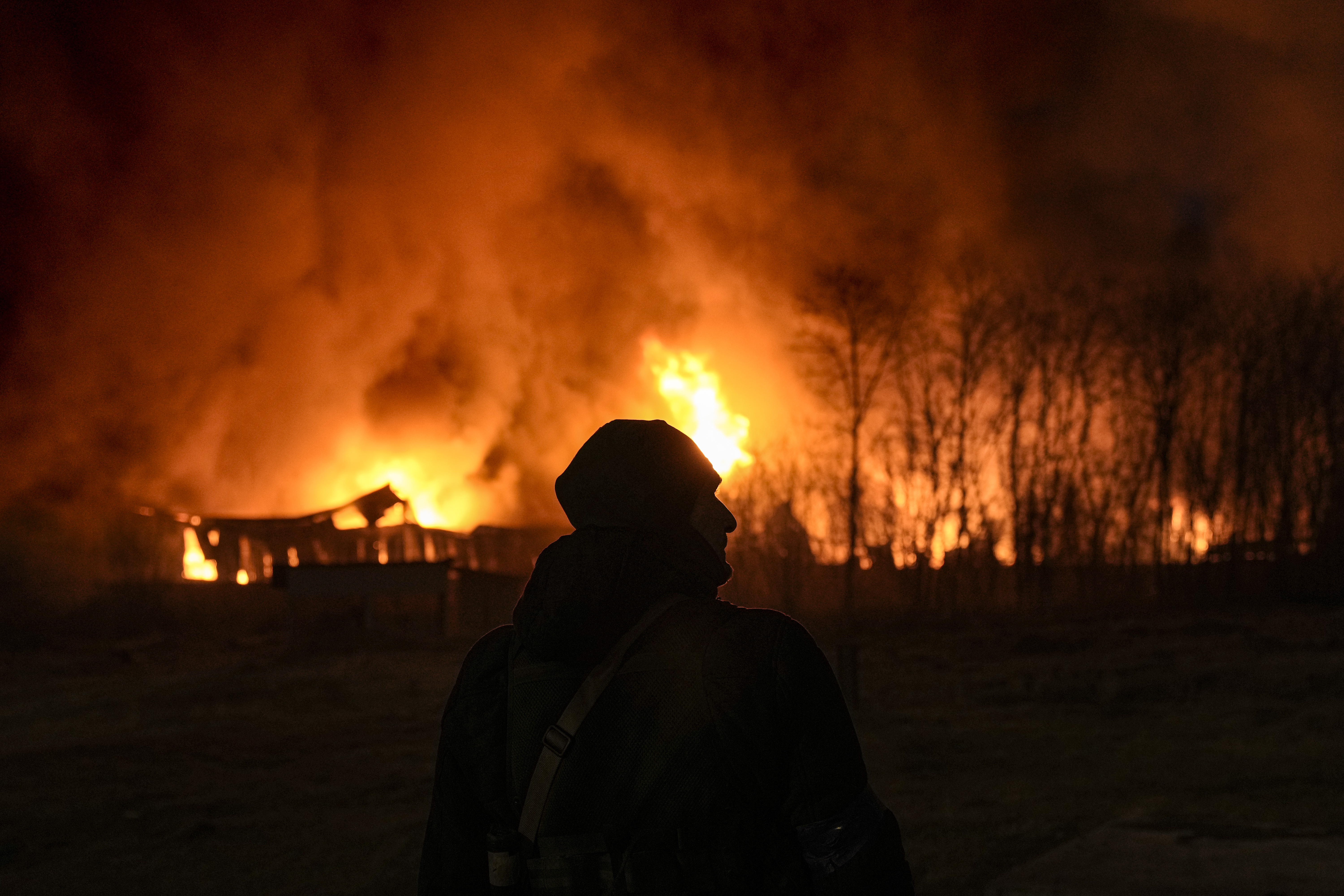 In Melitopol, Kherson and other Ukrainian locales now under Russian control, the Kremlin’s occupation plan is going as badly as Vladimir Putin’s plan for quick military conquest.

In seizing or surrounding urban centers, especially in the traditionally Russian-speaking southeast, the Russian president had hoped to largely rerun his 2014 invasion of Crimea, in which the local Ukrainian parliament quickly sided with Russia and helped carry out an annexation.

Glimmers of that same post-invasion playbook have been on display in recent days. Russian forces have kidnapped local politicians, created councils loyal to Russia and promised economic benefits for residents, including lower household utility rates.

But unlike in Crimea, which had little support from a central government in disarray, Ukrainians are now fighting back, quickly drawing attention to abductions and disinformation, rejecting the overtures of aid as obvious bait on a deadly hook, and undermining the ability of Moscow to create even a facade of public support.

The pushback by Ukrainians has not only upended the occupation script but shattered illusions about the Kremlin’s mastery of political manipulation, much as the Ukrainian military’s unlikely successes have shattered the image of Russia as overwhelming military power. It is also confronting Putin with an uncomfortable reality: Even if he prevails militarily, long-term political defeat is virtually certain. Unlike Russians, who have tolerated authoritarianism for decades, Ukrainians took to the streets for pro-democracy revolutions in 2004 and 2013 and, no doubt, would do so again.

Ukrainian and Western intelligence analysts have long predicted that Russia’s post-war strategy would follow a pattern set in Crimea, as well as in Donetsk and Luhansk, two Ukrainian regions where pro-Russian separatists brutalized the local populations, sowed chaos and destruction, and formed corrupt puppet regimes to govern the so-called People’s Republics.

“I know their political plan; it’s very obvious for me,” said Oleksandra Matviichuk, a Kyiv-based human rights lawyer and director of the Center for Civil Liberties, which documents war crimes.

“Their plan is to occupy territories, physically liquidate active people, find people they can appoint as local representatives and control them,” she added. “We saw this in 2014, when the war started, how they work. Nothing changed. They repeat these tactics; it’s deliberate policy of political persecution and intimidation of the local population.”

Matviichuk said that Russia’s top targets were local politicians, religious leaders, civil and human rights advocates, artists, journalists — basically “any active people who are supposed to have ability to organize or coordinate some resistance.”

In Melitopol, for instance, the occupying Russian forces kidnapped the mayor, Ivan Fedorov, and named a replacement, Galina Danilchenko, a city council member from the Opposition Bloc party, which succeeded the pro-Russian Party of Regions, the party of ex-Ukrainian President Viktor Yanukovych.

Russian forces also captured the local broadcasting tower and Danilchenko appeared in a video on local television urging local residents to refrain from provocations and to cooperate with the occupying authorities.

“Our main task is to adjust all the mechanisms to the new reality in order to start living in a new way as soon as possible,” Danilchenko said. She also announced the creation of a “committee of people’s deputies” — precisely the type of sham local council Russia has used in the past to help dispatch with Ukraine’s existing government structures.

On Wednesday, however, Fedorov was freed in a prisoner exchange. He then spoke by telephone with Ukrainian President Volodymyr Zelenskyy and issued a defiant video message vowing to return to his city and raise the Ukrainian flag over the central square.

He signed off: “Glory to Ukraine.”

Much of Putin’s overarching occupation plan relied heavily on the success of a military strategy that envisioned capturing Kyiv, the national capital, within a matter of days.

The U.S. shared intelligence with Zelenskyy about how Russia planned to topple his government, arrest national officials, dissolve the national parliament, the Verkhovna Rada, and install a sham administration that would call new elections. Based on that intelligence, the U.S. developed plans to help evacuate Zelenskyy from Kyiv. Some analysts said Putin even hoped to temporarily restore Yanukovych to his old job. Others pointed to Yuriy Boiko, a former deputy prime minister and leader of the Opposition Bloc party.

Russia’s military may yet overrun Ukraine, allowing Putin to take control of the country. But for now, none of this has happened. Instead, Ukrainian forces led by Zelenskyy have held Kyiv and other major cities. And if the Kremlin counted on local populations, especially in the southeast, to quickly embrace Russian soldiers, it was a terrible miscalculation.

In Kherson, a strategically vital city where the Dnieper River meets the Black Sea, unarmed local residents took to the streets with Ukrainian flags to protest the Russian invasion, cursing at the invaders and denouncing them as “occupants.”

The Russian forces tried to set up a Telegram channel calling for the establishment of a Kherson People’s Republic — modeled after the breakaway People’s Republics in Donetsk and Luhansk — but it was quickly reported and taken down.

Ukraine’s Center for Counteracting Disinformation also issued swift warnings that invaders were planning to stage a pro-Russian rally in the city, warning residents: “Don’t be fooled! Don’t come close to this crowd! Don’t believe the fakes!”

With residents showing fierce resistance, going out to demonstrate even amid tanks and gunfire, Russian troops mostly retreated to positions surrounding the city, leaving it in a stranglehold. Local officials said they thought Russian agents were trying to organize a referendum but public opposition appears to have derailed those plans.

Ukrainian forces, meanwhile, continue to fight back from within Kherson, mounting a bombing campaign this week that destroyed numerous Russian helicopters parked on the Kherson airfield.

While residents of these occupied or surrounded cities and towns are facing acute shortages of food and other essentials, they have refused to accept the “humanitarian aid” Russia is trucking in from Crimea.

In Melitopol, the replacement mayor, Danilchenko, publicly thanked Chechen strongman leader Ramzan Kadyrov for assistance coming to the city after the Putin loyalist took credit for it.

“Life in Melitopol, liberated from Ukrainian nationalists, is gradually getting better,” Kadyrov proclaimed on his Telegram channel. “Law enforcement and administrative bodies begin to function, public order is established. The only problem for the locals was the lack of medicines.”

Kadyrov claimed his charitable foundation had sent 20 tons of medicines on top of 100 tons of food.

Infuriated local residents, however, only heaped scorn on the gestures. The local news outlet Melitopolskiye Vedomosti pointed out that Danilchenko had previously sworn an oath of office expressing fealty to Ukraine’s constitution.

Danilchenko, wrote local journalist Alexander Ilchenko, “promised to faithfully serve the community and people of Ukraine. It would be interesting to know what the oath sounds like … before becoming acting mayor.”

Given such resistance, and the failure of Russia to achieve many of its military objectives, core components of the Kremlin’s occupation plan now seem like a pipe dream.

Russia is nowhere close, for instance, to seizing control of the Ukrainian National Bank and halting all payments on the country’s billions in foreign debt. Nor will it be able to soon absorb Ukraine into Russia’s Eurasian customs union, a paltry imitation of the EU’s single market that Moscow maintains with Belarus and former Soviet states in Central Asia.

Other Kremlin goals are only tethered to a mythological Ukraine manufactured by Kremlin propagandists, such as a desire to promote the Russian language — a language Ukrainians already speak regularly.

In Ukraine, Russian soldiers are routinely cursed out by local residents in their shared native tongue. And Ukrainian officials from Zelenskyy on down have constantly trolled Russian officials — in Russian.

The fear now is that Russian forces, prevented from carrying out the Kremlin’s political master plan, will simply destroy cities they can’t control. Take Mariupol, for example, where according to one Western analysis, 80 percent of housing is no longer suitable for living. And in Izyum, a town in the Kharkiv region, water, electricity and heat have been cut off for two weeks.

At the same time, human rights activists say Russia’s brutality also persists in territory that it occupies, and kidnappings of local officials are continuing.

On Tuesday in Bucha, a small city in the Kyiv region, Russian forces attacked the city council building and seized six city staff members and volunteers. And on Wednesday morning, the Russian military abducted Oleksandr Yakovlev, mayor of Skadovsk, a town along the Black Sea, and Yuri Palyukh, a member of the town’s city council.

Throughout the occupied and besieged areas, residents are reporting brutal oppression that is fueling a mounting humanitarian catastrophe as they run short of food and medicine, and local services begin to fail.

Matviichuk, the Kyiv human rights lawyer for the Center for Civil Liberties, has helped her organization compile lists of Ukrainians killed, kidnapped or missing in occupied regions. They are also working with Ruslana Lyzhychko, the singer and Eurovision winner known as the Voice of Maidan, who read out the list of names on a video broadcast Tuesday on Facebook.

Matviichuk is also drawing attention to cases of abuse of ordinary citizens who are stopped by Russian forces at checkpoints and forced, for example, to make pro-Russian statements.

In a telephone interview with POLITICO, one resident of Kakhovka, a town located not far from an important hydroelectric plant in the Kherson region adjacent to Crimea, said that a 6 p.m. curfew is now in place. And even during the day, it is virtually impossible to move around because of checkpoints where Russian soldiers inspect identity documents, conduct strip searches and confiscate mobile phones.

This resident, who spoke on condition of anonymity because of the risk to her life from criticizing the Russians publicly, said that efforts to create pro-Russian propaganda in the regional capital had failed.

“We had many demonstrations with Ukrainian flags,” she said. “They couldn’t even film a story for the television saying we are pro-Russian in the region.”

But desperation is growing.

“We don’t have a lot of food in the supermarkets now. And many people cannot get groceries, no one will take their humanitarian aid,” the Kakhovka resident said. “There are many villages here and people can survive on some things they grew throughout the year. But, for example, my mother needs the thyroid hormones, which are, you know, and many people need them here. Or anti-cancer treatments, which are not being delivered.”

“It feels like, like prison,” she said. “I can’t even bring myself to go outside because I’m so scared.”