Javier Tebas said: “Perez detained Barcelona, ​​and they suffer from an inferiority complex towards the president of Real Madrid,” without revealing further details.. 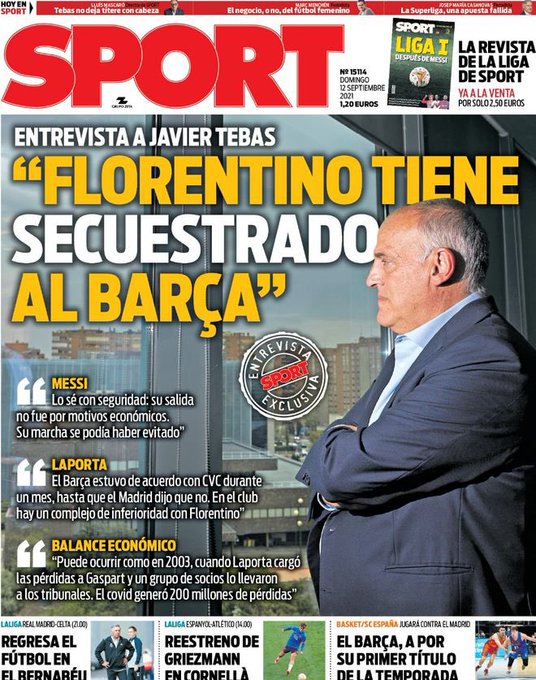 Regarding the economic situation of Barcelona, ​​​​the president of the Spanish League said: “Maybe what happened in 2003 when former president Jaspert was accused by Juan Laporta of losses and led by a group of partners to the courts, in addition to the fact that the Corona virus caused losses of 200 million euros to Barcelona.“.

In a different context, Tebas blew up a big surprise about Argentine legend Lionel Messi, and his shocking departure from Barcelona in a free transfer deal to Paris Saint-Germain..

A number of Barcelona officials confirmed that Messi’s departure came due to the difficulty of renewing his contract with the salary he requested, which does not match some of the regulations established in the Spanish League..

Tebas said: “I assure you that Messi’s departure was not for financial reasons, it was possible to keep him in Barcelona“.

When asked if it was possible to avoid Messi’s departure, he replied: “Yes, his departure could have been avoided. Perhaps his departure was not for financial reasons. We gave Barcelona a clear choice that would enable them to keep Messi, but Laporta refused,” and he explained in detail the last moments of Messi’s problem when everyone thought that he It will remain and link the problem to the issue of the European Super League, Florentino Perez and Real Madrid.

He added: “Cristiano Ronaldo, Pep Guardiola, Jose Mourinho, and after them Messi, we were lucky to have the best players and coaches in the Spanish League. “.