Frank Vogel will reportedly be fired as head coach of the Los Angeles Lakers less than two years after leading the club to its 17th NBA title.

The quartet of future Hall of Famers were supposed to push the Lakers into title contention this season, but injuries and Westbrook’s awkward transition following his trade from Washington reduced the celebrated franchise to a laughingstock in 2021-22.

Now, according to an ESPN report, Vogel is prepared to be fired Monday.

‘I haven’t been told s**** and I’m going to enjoy tonight’s game, celebrate what these young guys did in terms of scratching and clawing and getting back in this game and getting a W, and we’ll deal with tomorrow, tomorrow,’ Vogel told reporters Sunday.

Lakers spokespeople did not immediately respond to DailyMail.com’s request for comment. 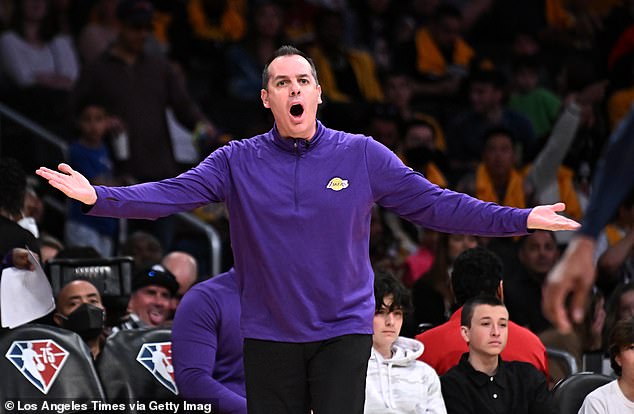 Frank Vogel will reportedly be fired as head coach of the Los Angeles Lakers less than two years after leading the club to its 17th NBA title, according to ESPN 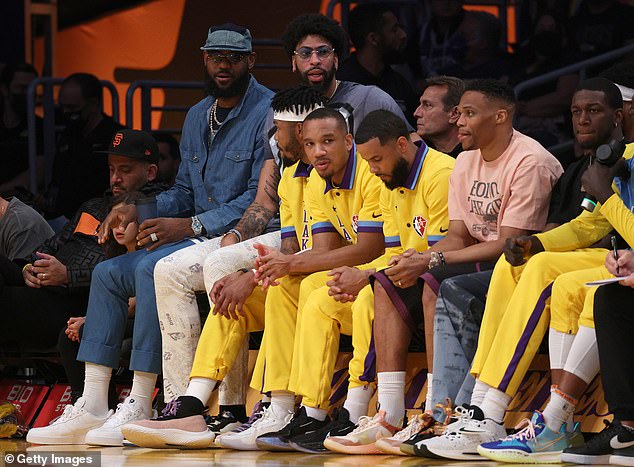 LA finished its massively disappointing 33-49 campaign on Sunday with an overtime victory over the Denver Nuggets – a game played without injured stars LeBron James (left, in denim), Anthony Davis (next to James), Russell Westbrook (right in a t-shirt) and Carmelo Anthony

The 48-year-old New Jersey native is signed through next season. He guided the Lakers to a title in 2020, when the NBA finished its pandemic-shortened season inside the league bubble at Disney World in Orlando.

To his credit, Vogel has not pointed the finger at his players for their poor play, and, at least outwardly, still appears to be popular within the Lakers’ locker room.

‘He kept his cool the whole time,’ Lakers guard Malik Monk said Sunday. ‘Didn’t talk about no problems like that. Didn’t talk about anything like that, man. He came in and worked and always gave us a great game plan … He was always about us. It was never really about him. And I praise him for that, man. I know that was pretty hard on him, but he never talked about it. He never changed his demeanor.’

For his part, Davis believes that he and the 37-year-old James are still capable of winning a title together.

‘I think us two can,’ Davis said Sunday. ‘We’ve shown that we can. ‘I don’t know that’s something we just have to reevaluate in the offseason, upstairs, me and him talking about this season and what we would like to see next season and kind of just figure it out.

‘… [We will] come together as a group … to get back to championship mentality that we had our first year. So that would be a very interesting conversation just from the standpoint of what changed. I mean, injuries, but even when we were healthy, I don’t think we were able to reach our full potential — for whatever reason. So I think we want to figure it out and just get back to that championship pedigree that us as players know we’re capable of.’ Westbrook, James, and Davis have hardly shared the floor this season as the latter has been plagued with knee and foot problems.

‘We had the pieces but injuries got into the way of that,’ Davis said last week. ‘That was the difference in our season.

Of course, acquiring the aging Westbrook from Washington for Kentavious Caldwell-Pope, Kyle Kuzma and Montrezl Harrell didn’t work out either, as the nine-time All-Star failed to complement James & Co. and was frequently criticized for his poor shooting.

Despite his own injury issues, James played remarkably well in his 19th season at age 37, averaging more than 30 points per game for the first time since 2007-2008, when he was just 23.

But as Lakers fans are all too aware, the rest of the team never came together and the club finished the year ranking 24th and 22nd in points scored and allowed, respectively, per 100 possessions.

‘This Lakers team not making the playoffs is one the Biggest Disappointments in NBA HISTORY!!!’ tweeted former NBA center Kendrick Perkins, an ESPN personality who was once teammates with James. ‘It’s one thing to underachieve in the Playoffs but to not make it at all is RIDICULOUS.’ 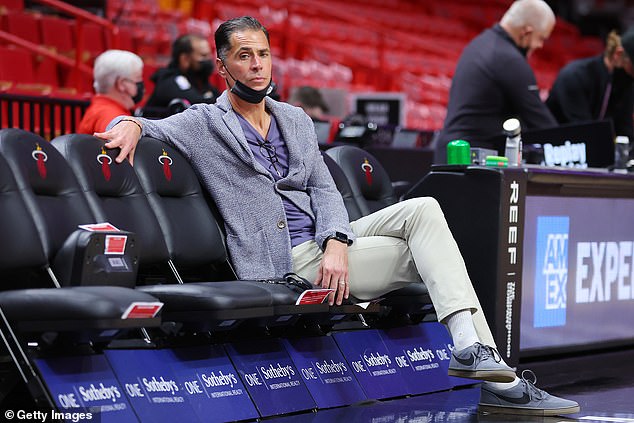