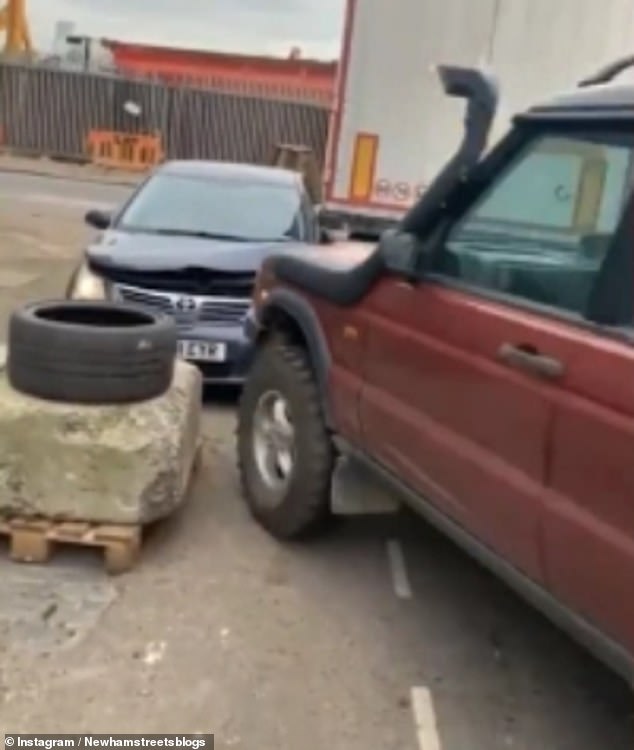 A Land Rover driver repeatedly rammed his 4×4 into a parked car in a shocking parking row.

Crowds gathered in the video, which shows the Land Rover writing off the parked car after colliding head on with it.

A Land Rover driver repeatedly rammed his 4×4 into a parked car in a shocking parking row in Canning Town, London

In the video, the red Land Rover revs its engine while still before suddenly accelerating head on into the parked car.

It immediately crumples the Toyota’s bonnet while the driver keeps his foot on the pedal, causing wheel spin.

The Land Rover reverses back off the car as crowds gather in the London street and the extent of the damage is revealed.

A dog runs in front of the 4×4 before it accelerates again straight into the grey Toyota.

The Land Rover crumples the Toyota’s bonnet while the driver keeps his foot on the pedal, causing wheel spin

It reverses back again and a man behind the camera says: ‘Oh my days’.

A man holding his hands to his head walks out to examine the damage done to a lorry parked next to the Toyota.

The person behind the camera shouts ‘one more’ before the Land Rover smashes into the parked car a final time and he laughs.

It is not known when exactly the footage was taken or what sparked the incident, but social media users suggested it was due to a parking argument.