Last minute of the war in Ukraine, live | British intelligence accuses Putin of causing his troops to drop by underestimating the Ukrainian resistance | International 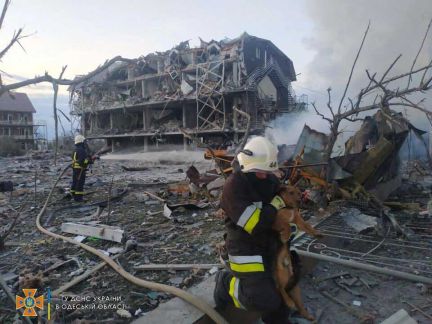 Biden signs a law that speeds up the delivery of weapons to kyiv. The President of the United States, Joe Biden, has signed this Monday the application to Ukraine of the Lending and Leasing Law, a regulation signed by Franklin D. Roosevelt in 1941 that allows “selling, transferring, lending, renting or delivering” material of war on any country the US deems “vital to its defense.”

Underestimation of Ukrainian resistance causes “unsustainable losses” among Russian troops, according to the UK. Russia’s underestimation of Ukrainian resistance has led to operational errors and caused “unsustainable losses”, according to the UK Ministry of Defence. “It is very likely that Russia’s invasion plan was based on the mistaken assumption that it would meet limited resistance,” British intelligence said in its latest report, published on Tuesday.

The European Bank for Reconstruction and Development predicts a 30% contraction of the Ukrainian economy this year. The European Bank for Reconstruction and Development has revised downwards economic forecasts for Ukraine this year. The institution estimates that the contraction will be 30%, compared to the 20% announced in March, shortly after the beginning of the Russian offensive. The international organization estimates that the Russian economy will contract by 10% due to international sanctions and the cost of the conflict.

Guterres asks Ukraine and Russia to negotiate. UN Secretary-General António Guterres called on Monday for Russia and Ukraine to speed up their negotiations to reach a peaceful agreement to end the war. “I am extremely concerned about the continuation and possible extension of the war that Russia is waging in Ukraine, and the impact it is having, not only in the region, but throughout the world.” The secretary general has stated that the consequences of an escalation of the conflict “are too terrifying to contemplate.”

The meeting between Von der Leyen and Orbán ends without agreement. The meeting this Monday in Budapest between the president of the European Commission, Ursula von der Leyen, and the Hungarian prime minister, Viktor Orbán, has not broken the blockade that the latter has presented before the European proposal to progressively boycott Russian energy.

In the image, of the Emergency Services of Ukraine, a building destroyed after an attack in Odessa, on Monday.

4 cases of people who fell in love with famous prisoners

PlayOffs NBA 2022: Who is the true favorite for the NBA ring?

PlayOffs NBA 2022: Who is the true favorite for the NBA ring?