Last minute of the war in Ukraine, live | Moscow announces its first submarine attack in the Black Sea as kyiv tries to save Mariupol | International 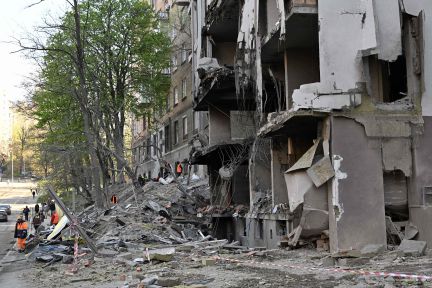 On the 65th day of the war initiated by Russia against Ukraine, these are the key data at 2:00 p.m. this Friday, April 29:

Russia attacks eastern Ukraine and holds siege to Mariupol steelworks. The Russian Army maintains its offensive in the east and south of Ukraine, as well as the siege of the Azovstal steel plant, in the port city of Mariupol (southeast), which it has almost controlled, as reported by the General Staff of the Armed Forces of Ukraine. kyiv is trying to open a corridor to rescue the people who resist in the steel mill.

Moscow confirms that it attacked kyiv on Thursday with “high-precision” weapons. Russia has confirmed this Friday to have attacked kyiv, the Ukrainian capital, the day before with “high-precision” weapons during the visit of the UN Secretary General, António Guterres. At least one person was killed during the bombardment. And another 10 were injured. The deceased is a Ukrainian producer of Radio Liberty, Vera Hyrych.

Russia announces its first missile attack from a submarine in the Black Sea. It is the first time that Moscow has announced the use of its submarine fleet to attack the neighboring country. As reported by the Defense Ministry, Russian forces have used Kalibr cruise missiles.

Ukraine raises the number of minors killed since the start of the war to 219. The Ukrainian authorities have raised this Friday to 219 the number of children killed since the start of the war with Russia on February 24. The Ukrainian Prosecutor’s Office has stated in a message on its Telegram account that to date it has also been confirmed that another 398 minors have been injured in the framework of the hostilities.

The Central Bank of Russia lowers interest rates from 17 to 14%. The highest Russian monetary authority maintains its roadmap and announces the reduction of interest rates, from 17% to 14%, because the latest data “point to a slowdown in the increase in prices due to the strengthening of the ruble and the cooling Of consumption”.

Moscow was behind the aggression against the director of ‘Nóvaya Gazeta’, according to the US. US espionage services claim that the Kremlin was behind the attack on Russian journalist and Nobel laureate Dmitri Muratov, according to an official statement released by the US press. According to the media, Washington does not offer any details or evidence “due to the need to protect its sources and methods.”

The UK will send war crimes experts to Ukraine. The UK announced Friday that it will send experts to help Ukraine gather evidence and prosecute war crimes, with a team due to arrive in Poland in early May. “Russia has brought barbarism to Ukraine and has committed vile atrocities, including against women. The British experience will help uncover the truth and hold the regime in [el presidente ruso, Vladímir] Putin for his actions,” British Foreign Secretary Liz Truss said.

In the photograph, Genya Savilov (AFP), workers remove the rubble from the damaged building after Thursday’s attack in kyiv.

This iba weightlifter to be descaled by its at