Last minute of the war in Ukraine, live | Putin accepts “in principle” that the UN and the Red Cross intervene to evacuate civilians from Mariupol | International 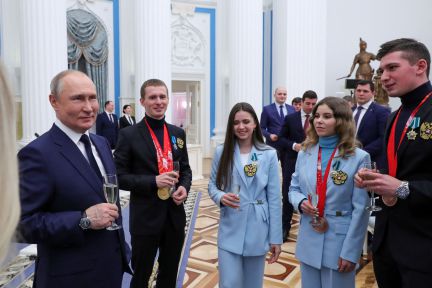 On the 62nd day of the war initiated by Russia against Ukraine, these are the key data at 8:00 p.m. on Tuesday, April 26:

Guterres proposes a contact group in Moscow to create humanitarian corridors in Ukraine. The Secretary General of the UN, António Guterres, has proposed during his meeting in Moscow on Tuesday with the Russian Foreign Minister, Sergey Lavrov, the creation of a contact group to establish humanitarian corridors in Ukraine. Lavrov has warned that the negotiations with Ukraine are in danger: “It is unlikely that the talks will have a result if the Ukrainian side stays on its line.” Guterres has also met with the Russian president, Vladimir Putin, a meeting in which he has been open to negotiating under conditions with his Ukrainian counterpart, Volodímir Zelensky, on Crimea and Donbas.

Russia cuts gas supplies to Poland for refusing to pay in rubles. The Russian company Gazprom has informed Poland that it will cut off its supply through the Yamal gas pipeline, alleging breach of contract by Warsaw, which had refused to pay Russia in rubles. The Polish Climate Minister, Anna Moskwa, has assured that her country will not be affected: “We have the necessary reserves, we have been effectively independent of Russia for years. Our warehouses are 76% full. There will be no shortage of gas in the Polish homes”.

The IAEA notes “abnormal levels” of radiation at Chernobyl. The director of the International Atomic Energy Agency (IAEA), Rafael Grossi, has visited the facilities of the Chernobyl nuclear power plant (northern Ukraine) together with a working group from this UN institution. There, they have found “abnormal levels” of radiation after Russian troops spent more than a month in charge of the plant, which they took over at the beginning of the attack on Ukraine.

Moldova sees “internal forces that want a war” after the attacks in Transnistria. After the explosions that began on Monday in the separatist region of Transnistria, the president of Moldova, Maia Sandu, has assured that these attacks are due to local interests: “The escalation attempts are related to internal forces of Transnistria who want a war and are interested in to destabilize the situation”. Ukraine has expressed its concern and has warned of a Russian attempt to drag this area into the war.

Ukraine denounces new deaths in attacks in Kharkov and Lugansk. The Russian offensive in eastern Ukraine continues: the governor of Kharkov has reported that a Russian bombing has resulted in at least three deaths and seven wounded, and the governor of Lugansk has reported the death of three people in another bombing in a residential area..

PHOTO: Russian President Vladimir Putin toasts with the Olympic medalists of the Beijing 2022 Games, this Tuesday in the Kremlin. (Mikhail Klimentyev / Sputnik / Kremlin via Reuters)

Why do fungi and bacteria manage to survive wildfires in California?