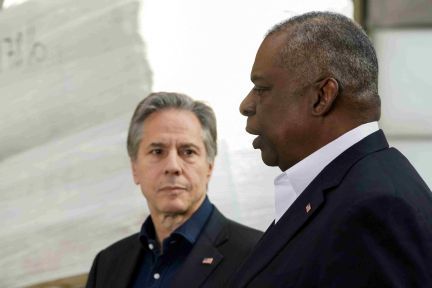 On the 61st day of the war initiated by Russia against Ukraine, these are the key data at 9:00 a.m. on Monday, April 25:

The United States announces the return of its diplomats to Ukraine. The US will once again have diplomats in Ukraine. This was announced this morning by the Secretary of State, Antony Blinken, to President Volodímir Zelenski during a visit to kyiv together with the US Secretary of Defense, Lloyd Austin. The trip has been confirmed this Monday by the US, according to the Reuters and AFP agencies. The US will first reopen its diplomatic mission in Lviv and later it will do the same with its embassy in kyiv. Zelensky, for his part, has asked Washington for more weapons. “We will support Ukraine to the end,” said Blinken upon returning from the lightning trip to kyiv together with Defense Secretary Lloyd Austin. “The Ukrainians are strong, they are resisting, with the help of the whole world. There is massive support for Ukraine, massive pressure on Russia. Solidarity is giving real results. Russia is failing, Ukraine is succeeding. If Russia wanted to divide the West, she has achieved the opposite,” Blinken said.

The UK claims that Russia has made minor progress since it focused its offensive on Donbas. The British Ministry of Defense says in an intelligence report that Russia has made minor progress since shifting its focus to fully occupying the Donbas region of eastern Ukraine. “Without sufficient logistical and combat support, Russia has yet to make a significant breakthrough,” the text explains. According to British intelligence, Russia’s decision to besiege and surround rather than attack the Azovstal metallurgical plant, the last pocket of Ukrainian resistance in the port city of Mariupol (southeast), means that many Russian units remain stationary in the city and they cannot be deployed at other points. Additionally, Ukraine’s defense of Mariupol, a city Russia has failed to fully conquer in more than two months of war, has also exhausted many Russian units and reduced their combat effectiveness.

Russia continues to focus its attacks on eastern Ukraine. The Russian Army continues one more day focusing its attacks on towns in the pro-Russian regions of Lugansk and Donetsk, in eastern Ukraine, where there have been assaults and bombings of various kinds, the General Staff of the Ukrainian Armed Forces announced on Monday. . In the early hours of April 25, 2022, “the enemy continued to carry out offensive operations within the Eastern Operational Zone [ucranio] to defeat the Joint Forces Operations group (JFO), gain full control over the Donetsk region and the Lugansk region”, explained the General Staff.

Ukraine denounces at least 2 dead and 14 wounded in attacks on Kharkov. The governor of Kharkov (northeast), Oleg Sinegubov, reported on Sunday that 2 people have died and 14 others have been injured as a result of Russian attacks on the region this Sunday, when the country celebrates Orthodox Easter. Sinegubov claims that on Easter night, Russian troops attacked the Oleksiivka and Saltivka districts, causing three injuries. During the day, they fired on the districts of Zolochiv and Chuguiv causing, according to preliminary data, 11 wounded, including an 11-year-old boy. In addition, two people have died in the cities of Kharkov and Chuhuiv. The governor has indicated that the National Police has been patrolling “in an intensified way” and monitoring the situation, and has thanked the residents of the region who have not come to visit the churches this Easter.

In the picture, which is from Alex Brandon, US Secretary of State Antony Blinken (left) and Defense Secretary Lloyd Austin at a press conference on the Polish-Ukrainian border after returning from kyiv.