Last minute of the war in Ukraine, live | The mayor of Mariupol affirms that 40,000 people have been deported to Russian territory | International 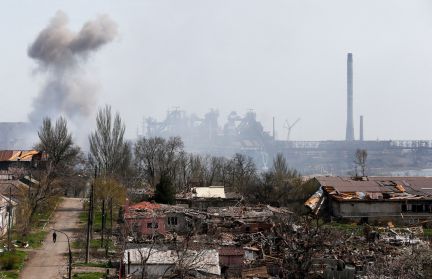 On the 54th day of the war initiated by Russia against Ukraine, these are the key data at 8:00 p.m. on Monday, April 18:

The US believes that Mariupol has not yet fallen and that Russia has strengthened its positions in the Ukraine. The port city of Mariupol is still being disputed between Russian and Ukrainian forces, a US Defense Department source told Reuters on Monday. “The city is still under threat from the air, both from planes and from missiles and, of course, artillery.” The mayor of the city claims that 40,000 people have been deported to areas under Russian control.

More than 4.9 million refugees from the war in Ukraine, according to the UN. The United Nations High Commissioner for Refugees (UNHCR) has reported that more than 4.9 million Ukrainians have fled their country because of the war. Exactly, the agency numbers 4,934,415 refugees who have left Ukraine, mostly women and children. The total number of civilians who have left the country since the beginning of the Russian offensive exceeds five million, since the UN’s International Organization for Migration assures that almost 215,000 citizens of other countries, mostly students and migrant workers, they have returned to their places of origin or have settled in nearby nations.

Putin rewards a military unit that, according to Ukraine, participated in the Bucha massacres. The Kremlin announced this Monday the granting of the title of “Guards” (which, in the Russian armed forces, define elite units) to the 64th Autonomous Motorized Rifle Brigade, “for its heroism, courage and strength shown in operations of combat for the protection of the Homeland and the interests of the State in armed conflicts”. The 64th Rifle Brigade is among the units suspected of having participated in the occupation of the regions north of kyiv, when, according to the Ukrainian Prosecutor’s Office and several international organizations, Russian forces killed hundreds of people, among other atrocities.

Putin ignores the Russian Central Bank’s warning that the economy will collapse in months. Vladimir Putin and the president of the Russian central bank, Elvira Nabiúllina, hold opposing views on the economic crisis that hangs over the country. “We can say with confidence that the policy against Russia has failed and the flash war has not been successful”, the president assured during a conference in which he used the term with which Nazi Germany called the blitzkrieg. Hours earlier, the head of Russian monetary policy had warned that her country is running out of reserves and that the real crisis could begin between the second and third quarters due to the sanctions imposed by the war against Ukraine.

In the photo, by Alexander Ermochenko for Reuters, an image of the besieged city of Mariupol. In the background, the Azovstal steel plant.

How have residents reacted to the mask mandate in Philadelphia? | Video