Last minute of the war in Ukraine, live | The Russian Army announces an attack on the Mariupol steelworks where some 200 civilians resist | International 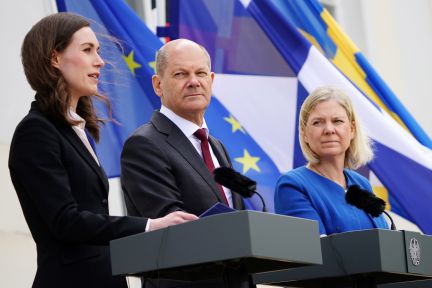 By Elena G. Sevillano (Berlin). Instead of preventing the expansion of NATO, Putin’s war of aggression has achieved the opposite objective: that non-aligned, or neutral, countries consider requesting membership. This is the case of Finland and Sweden, which Germany would support if they decided to apply for entry into the Alliance. “You can count on our support,” German Chancellor Olaf Scholz said on Tuesday after meeting with the prime ministers of both countries in Berlin. Scholz has assured that the invasion of Ukraine has changed the security perspectives in Europe and has pointed out that Putin could attack other countries: “No one can be sure that Russia will not break international law by force again.”

The German chancellor is again under pressure for his refusal to travel to kyiv to meet with the Ukrainian president, Volodymyr Zelensky. Last night, in an interview on public television, he reiterated that it is not in his plans and pointed to Zelensky’s recent rudeness to the German president, Frank-Walter Steinmeier, a Social Democrat like Scholz, who tried to travel to kyiv but was rejected for having held good relations with Russia in the past. Given the chancellor’s refusal, the leader of the opposition, Friedrich Merz, intends to move to kyiv in the coming days, although it is not clear that he will be able to meet with Zelensky.

Together with the Swedish and Finnish prime ministers, Scholz reviewed the 180-degree turns that Germany has undergone since the war began, more than two months ago. Russia’s violation of international law “represents a turning point,” he said. When everyone was clear that the borders of the States were immovable, the Russian aggression has shaken those principles. “That’s why we’re increasing our defense efforts,” he noted. The German Government has promised to allocate 100,000 million euros to the improvement of its armies and to allocate 2% of its Gross Domestic Product to defense. It has also reversed its cautious arms export policy by delivering defensive weapons and ammunition to Ukraine, including heavy weapons.

Sweden will also increase its defense spending until it reaches the 2% target required by NATO from its member countries, Swedish Prime Minister Magdalena Andersson recalled. “The security situation calls for closer integration than before, also with our transatlantic partners. We need to expand our defensive capabilities and do it fast,” she added. Andersson highlighted the “close relationship” between the three countries: “We share with Germany a deep commitment to democratic values,” she said in German.

“Finland and Sweden face important decisions regarding their own security,” said Finnish Prime Minister Sanna Marin, who described NATO’s “open door policy” as “a key element of European security.” The president assured that her government has not yet decided if she will present the application to join the Alliance. On Sunday Finnish media published that she will do so on May 12.

“Russia’s attack on Ukraine has drastically changed our security environment, and that cannot be undone. Now we see more clearly where Russia wants to take us, which is basically a world of spheres of influence where the strongest have the last word, “said Marin at the Meseberg castle (in Brandenburg, east of Berlin), where both rulers have been invited to a two-day meeting of the German Cabinet. Finland and Russia share 1,300 kilometers of border. “Russia has shown very clearly that it is not committed to the basic principles of European security, just as it is not committed to the basic principles of international law,” Marin added.