Last minute of the war, live | Russians and Ukrainians blame each other for an attack that caused damage to the Zaporiya nuclear power plant | International 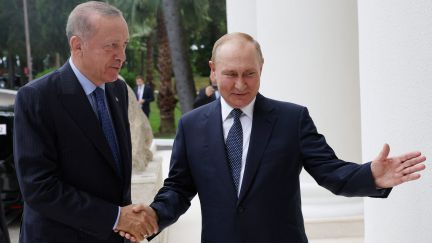 Russian President Vladimir Putin on Friday thanked his Turkish colleague, Recep Tayyip Erdogan, for his role in signing the agreement for the export of Ukrainian cereals and also Russian food. The agreement was reached on July 22 and this week it has begun to take effect, with the departure of several ships loaded with grain from Ukrainian ports.

“With your direct participation and with the mediation of the UN secretariat, the problem related to Ukrainian grain supplies from Black Sea ports was solved,” Putin said at the beginning of the meeting he held with the Turkish leader at his residence. summer in the resort of Sochi.

Putin added: “Supplies have already started. I want to thank you for this and because, at the same time, a joint solution was adopted on the uninterrupted supply of Russian food and fertilizer to the world market.” In addition to the output of Ukrainian grain, the agreement also includes safe corridors so that Russian grain and fertilizers can reach international markets.

He considered this agreement “very important” in view of the serious problems faced by many countries due to the interruption of grain exports from Ukraine and Russia.

The Kremlin spokesman, Dmitri Peskov, specified that Putin and Erdogan will speak today “about how the journey of the first grain shipment from (the Ukrainian port of) Odessa went.” He was referring to the freighter Razoni, which carried 26,500 tons of corn from Odessa to Lebanon across the Bosporus Strait on Monday.

According to the Turkish authorities, three other ships will depart on Friday from the Ukrainian ports of Odessa, Chornomosk and Pvidenny.

Putin also opined that “European partners should be grateful to Turkey because it guarantees the smooth transit of our gas to the European market.” “The Turkish Stream, unlike all other routes of our hydrocarbon supplies, works correctly, dynamically, without failures (…), it has become one of the main arteries for the supply of Russian gas to Europe” , he highlighted.

At the bilateral level, Putin expressed his confidence that today both parties will sign a memorandum on the development of economic-commercial relations.

For his part, Erdogan stressed that “from Turkey’s point of view, Russia plays a special role in the world arena” and hoped that this Friday’s meeting “will open a new page in Russian-Turkish relations.”

In relation to energy, Erdogan asked Putin to talk about the Akkuyu nuclear power plant, which is being built with Russian assistance, the Black Sea grain corridor, tourism and transport. “Our delegations have already met and discussed everything, but today they will address the rest of the agenda face to face,” he added.

Erdogan traveled accompanied by a large delegation that includes the ministers of Foreign Affairs, Defense, Energy, Finance, Agriculture and Trade.

According to Peskov, the leaders will discuss the situation in Syria, for which Hakan Fidan, the head of the Turkish intelligence service, has also traveled to Sochi.

Erdogan wants to get Putin’s approval for a new Turkish military operation in northern Syria against the Kurdish militias, the People’s Protection Units (YPG), which he has been announcing for weeks. (EFE)

In the image provided by the press service of the Turkish presidency, Recep Tayyip Erdogan greets Russian President Vladimir Putin before their meeting in Sochi.

US and Russia ready to continue discussing prisoner swap

How to fill the HPA paintball tank

How to fill the HPA paintball tank