The last surviving pilot from the RAF’s ‘Dambusters’ squadron, who was awarded France‘s highest honour after carrying out 30 operations against enemy targets in the Second World War, has died at the age of 100.

He also took part in a raid which aimed to destroy the German battleship the Tirpitz in October 1944, after it had been damaged by bombs a month earlier.

And in April 1945, he was part of the team which tried to bomb defeated Nazi dictator Adolf Hitler’s ‘Eagle’s Nest’, which sat atop a rocky outcrop in southern Germany.

Goodman’s squadron is most famous for the daring ‘bouncing’ bomb attacks on the Mohne and Eder Dams in the industrial heart of Germany in 1943.

The raids, which saw drum-shaped bombs bounce off the water before exploding against the dam walls, were carried out by daring Lancaster bomber pilots.

The operation has gone down in history as being among the most successful aerial assaults of the Second World War. 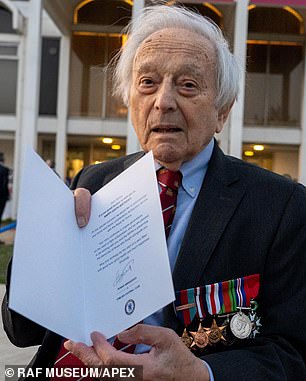 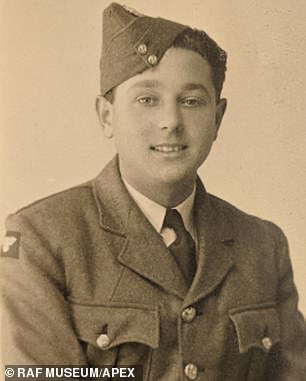 Tributes have been paid to Squadron Leader Lawrence ‘Benny’ Goodman, the last surviving member of the RAF’s ‘Dambusters’ squadron, who has died aged 100. He took part in 30 operations with 617 Squadron during the Second World War, including two targeting the German battleship the Tirpitz

Goodman, who was awarded France’s Légion d’Honneur in 2017, volunteered to join the RAF aged 18 at the outbreak of war in September 1939.

Selected to train as a pilot, he proved so skilful that in 1942 he was posted to Canada to work as a flying instructor.

He later requested a return to the UK and, after retraining, became the first pilot without operational experience to be posted to Bomber Command’s 617 Squadron.

His first taste of action came in August 1944, when he took part in an attack on the city of Brest.

Then, in October 1944, he took part in an unsuccessful second raid on the Tirpitz, after the battleship had been heavily damaged by bombs a month earlier. 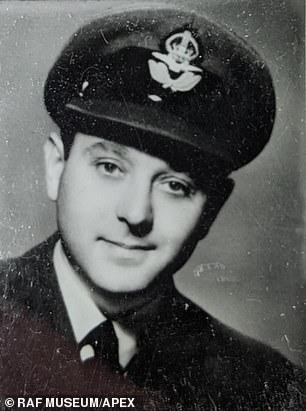 The aim of the second mission was to destroy the ship entirely.

The ship was finally sunk in a raid in November that year.

The raid on the Arnsberg viaduct in March the following year saw Goodman drop one of the RAF’s ‘Grand Slam’ 22,000lb bombs, which were used on more than 40 targets in total.

The 42ft-long Arnsberg viaduct crossed the Ruhr, in northern Germany. The Grand Slam raids helped to speed up Germany’s defeat in the final months of the Second World War.

In April 1945, Goodman was part of 617’s final operation of the war: to bomb Hitler’s ‘Eagle’s Nest’ in southern Germany.

Goodman was initially demobbed in 1946 but, with the urge to service his country still strong, he then served in the Royal Auxiliary Air Force’s 607 Squadron, where he flew Spitfires from RAF Hendonnow.

He then re-joined the regular RAF in 1948, when the Soviet Union blockaded access to the sections of Berlin which were under Western control.

The aggressive blockade led to British and American planes dropping thousands of tonnes of food and other supplies to German citizens. 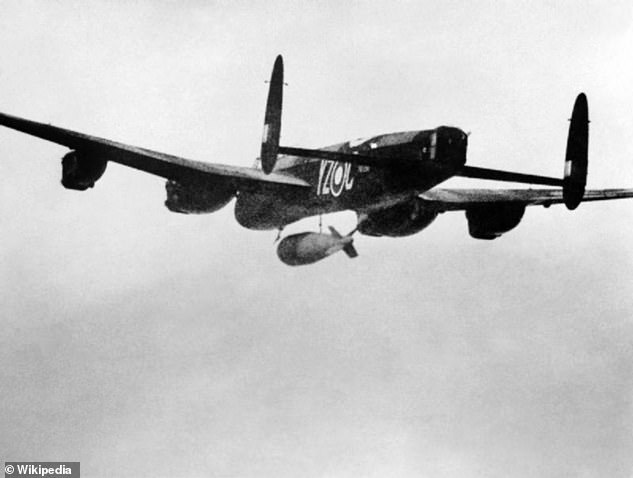 Benny eventually retired as a squadron leader in 1964 having logged over 3,500 hours on 22 different aircraft types.

He continued to hold a private pilot’s license into his 90s.

In 2017, France awarded him the Légion d’Honneur – their highest honour.

Maggie Appleton MBE, CEO of the RAF Museum, said: ‘So many of us will be mourning Benny while celebrating his outstanding contribution during the Second World War and his faultless RAF Service. 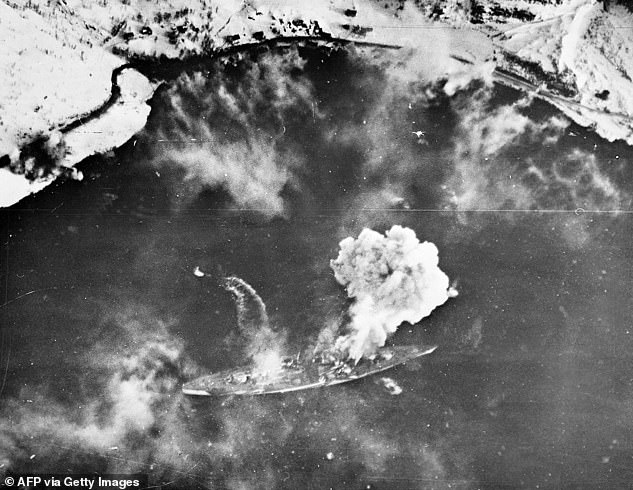 In October 1944, Goodman took part in an unsuccessful second raid on the Tirpitz, after the battleship had been heavily damaged by bombs a month earlier. Above: the battleship is seen with smoke rising from it after the September 1944 raid

‘The RAF Museum has been fortunate to call Benny a friend.

‘He supported us in sharing the incredible story of Jewish servicemen and women during the war and the brave airmen who were in a particularly perilous situation should they have been captured.

‘Benny was a special man who lived a long and fruitful life and brought joy and inspiration to many.

‘He will be sadly missed by his friends at the RAF Museum, but we will ensure that his stories live on to inspire generations to come.’

In March last year, Goodman was honoured at an exhibition for Jewish war veterans.

The Dambusters: How bouncing bombs – and incredible flying by RAF pilots – flooded the Ruhr valley and delivered a crucial blow to the Nazi war machine

On May 16, 1943, 19 Lancaster bomber crews gathered at a remote RAF station in Lincolnshire for a mission of extraordinary daring – a night-time raid on three heavily defended dams deep in Germany’s industrial heartland.

The dams were heavily fortified and needed the innovative bomb – which bounced on the water over torpedo nets and sank before detonating.

To succeed, the raiders would have to fly across occupied Europe under heavy fire and then drop their bombs with awesome precision from a mere 60ft above the water.

The Mohne and Eder Dams in the industrial heart of Germany were attacked and breached by mines dropped from specially modified Lancasters of No. 617 Squadron.

The Sorpe dam was was also attacked by by two aircraft and damaged. 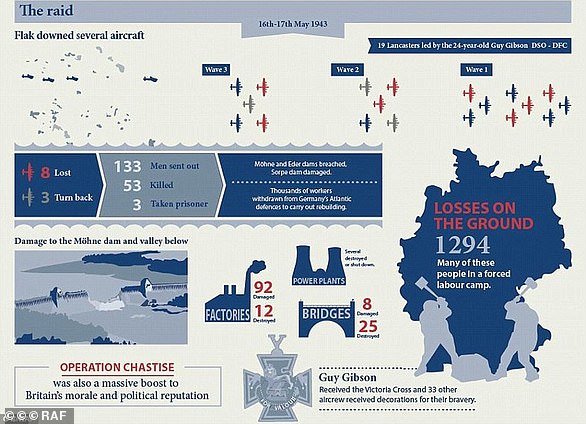 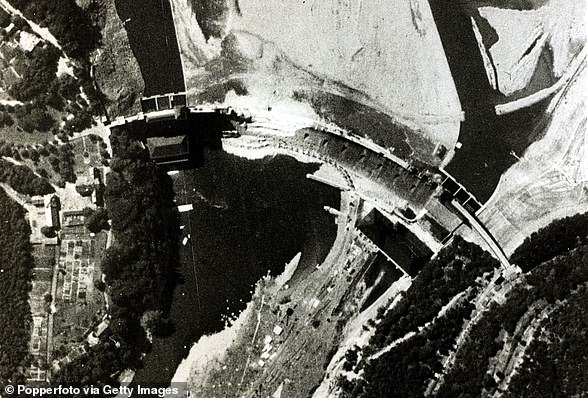 A fourth dam, the Ennepe was reported as being attacked by a single aircraft (O-Orange), but with no damage.

Up to 1,600 people were estimated to have been killed by floodwaters and eight of the 19 aircraft dispatched failed to return with the loss of 53 aircrew and 3 taken prisoner of war.

Wg Cdr Guy Gibson, Officer Commanding No. 617 Sqn, was awarded the VC for his part in leading the attack.

The raid, orchestrated by Guy Gibson and the RAF’s 617 ‘Dambuster’ Squadron, was seen as a major victory for the British, and Wing Commander Gibson is recognised as one of the war’s most revered heroes.

Their success was immortalised in the classic 1955 film The Dambusters, its thrilling theme tune and gung-ho script evoking the best of British derring-do.

The Axie Infinity platform has defied the odds of the broader crypto market and has gone...