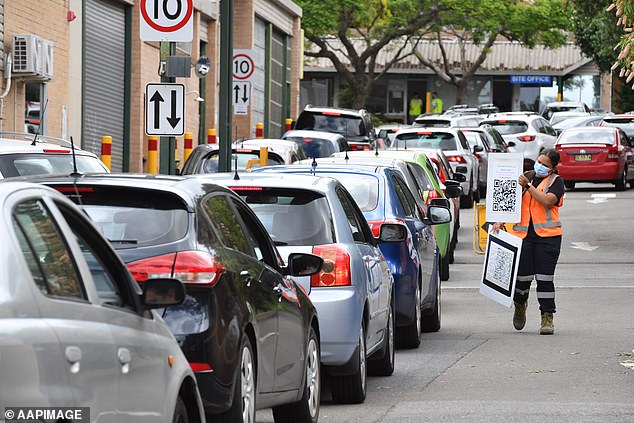 The Northern Territory has shown restraint in only banning seven suburbs hit by a new mystery cluster of coronavirus cases overnight.

But NT Chief Minister Michael Gunner and acting Chief Minister Nicole Manison did not respond by banning all Sydneysiders or closing the border to NSW, as other states did last week.

Cooler heads prevailing up north means the Territory is the only part of Australia where Sydneysiders can holiday or visit friends and family.

Long lines of cars queue for COVID-19 testing at the inner west suburb of Summer Hill in Sydney’s inner-west on Wednesday, December 30

Despite the size of Australia’s biggest city and the tiny number of cases, the greater region was quickly deemed an infection zone interstate after the Northern Beaches outbreak was identified on December 16.

Some state leaders even publicly demanded anyone from Sydney pay thousands for two weeks of mandatory hotel quarantine.

But Top End officials have remained lenient – only declaring hotspots in areas with recorded infections.

Anyone who has been to Croydon, Croydon Park, Strathfield, Strathfield North and Strathfield South in the city’s west, along with Lilli Pilli and Sutherland in the south must now enter hotel quarantine for 14 days in Howard Springs or Alice Springs.

People who have been to the Northern Beaches must also quarantine in the two approved facility for two weeks.

One infected household is from the inner-west the while the other two are from the broader Sydney region.

The increase in cases prompted the ACT to extend its border closure to Sydney residents for another week.

Victoria said it would not open its border to people from Sydney ‘anytime soon’, and banned more of the state including Wollongong and the Blue Mountains from 11.59pm on Thursday.

Queensland, Tasmania and South Australia already declared the whole of Sydney, the Central Coast, and Wollongong in the far south hotspots after two mystery cases were confirmed.

Anyone from the Blue Mountains, west of Sydney, will also have to quarantine for two weeks at the border after one person tested positive in Katoomba on Wednesday.

Pictured: A group at the Darwin Hotel in Darwin. The Northern Territory has only blocked people from infected areas of Sydney from entering

Meanwhile, Western Australia has enforced a blanket-ban on the whole of NSW, erecting its infamous hard border after just a week of it being open.

Ms Berejiklian described the Croydon cluster as concerning with 34 close contacts linked to the family of six infected cases.

‘The Croydon cluster is of concern because there are no direct links at this stage,’ Ms Berejiklian said.

‘We anticipate because of the nature of that extended family’s movements that there will be more cases from that cluster.’

The family held pre-Christmas gatherings in Sydney’s inner-west and south-west over several days, according to health officials.

A positive case of coronavirus has been detected in a worker at the Greenwell and Thomas Pharmacy on Katoomba Street, Katoomba

‘We are expecting that there will be additional cases linked to that cluster just because of the number of close contacts they had over the period of Christmas and the preceding days,’ NSW chief health officer Kerry Chant said.

She stressed there was nothing to suggest the family had breached any restrictions.

‘I think it reflects the time of year that this is a very social time where people spend a lot of time with their families,’ Dr Chant added.

Two further mystery cases recorded are members of the same household from Wollongong and another unlinked case is from northern Sydney.

Anyone who has visited must get tested and isolate until negative:

Nine of Wednesday’s new cases are from the Avalon cluster which emerged on Sydney’s northern beaches a fortnight ago.

‘I think it just highlights the fact that we can’t have this being seen as a Northern Beaches local government area issue,’ Dr Kerry Chant told reporters.

‘We have been concerned about these seeding events which may have seeded other parts an we have been clear because we don’t understand the full chain of transmission, how it actually got into the Northern Beaches.  We are concerned there might be unrecognised spread.’

The number of mystery cases has prompted Premier Berejiklian to limit the number of household visitors allowed in Greater Sydney to five, down from 10.

Outdoor gatherings have also been slashed from 50 to 30 people.

‘We don’t want New Year’s Eve to be the cause of a super-spreader,’ Ms Berejiklian said.

‘It only takes one person in a family gathering to give it to everybody else in the family.’

‘Our preferred advice is that people just stay home for New Year’s Eve, but if must have people over, don’t have more than five and please make sure you have adequate social distancing, good ventilation.’

Visitors to residential aged care facilities in the Greater Sydney area are also banned until January 6.

The figures recorded on Wednesday were the highest daily number of locally-acquired cases since December 20 and ends an eight-day streak of single-digit figures.