Latest news from the war in Ukraine, live | Ukrainians warn that two new cities besieged by Russia are almost out of food and medicine | International 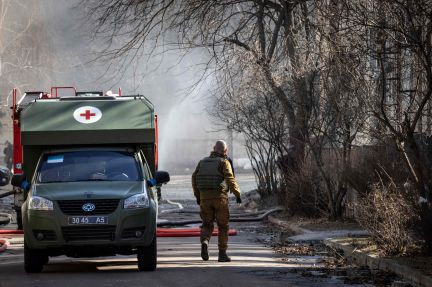 On the 27th day of the war initiated by Russia against Ukraine, these are the key data at 8:00 p.m. on Tuesday, March 22:

100,000 people trapped in Mariupol, according to Ukraine. Irina Vereshchuk, Ukraine’s deputy prime minister, said Tuesday that 100,000 citizens are still looking for a way to leave the besieged city of Mariupol. The governor of Donetsk, Pavlo Kirilenko, has assured that the confrontations continue in the streets of Mariupol and has accused the Russian troops of firing indiscriminately.

Supply crisis in Kherson (south) and Chernigov (north). In Kherson, the first Ukrainian city to fall under Russian control, the situation is extreme, according to the Ukrainian Foreign Ministry: 300,000 people are running out of food and medicine. And in Chernigov this crisis of essential goods is also noticeable: there is no electricity or gas and there is hardly any water, the Human Rights Committee of the Ukrainian Parliament has denounced, which affirms that the city is “at the limit of survival” .

A bombardment damages infrastructure and leaves one dead in the Dnipro region. Valentin Reznichenko, governor of the Dnipro region, has assured that a bombing has destroyed the Pavlograd train station. This has caused a fatality and the indefinite interruption of the train service.

Biden will seek an agreement in Europe to reduce energy dependence. US National Security Adviser Jake Sullivan has explained that reducing energy dependence and tightening sanctions on Russia will be the key issues that President Joe Biden will address on his trip to Europe this week.

The UN asks Russia to end the “absurd war” in Ukraine. The UN Secretary General, Antonio Guterres, has affirmed in New York that the Ukrainian people are “enduring hell” and has asked Russia to put an end to the “absurd war”. “Continuing it is morally unacceptable, politically indefensible and militarily absurd,” he stressed.

Spain investigates a complaint of detention of a Valencian in Ukraine by the Russian Army. Foreign Affairs is investigating the whereabouts of Valencian retiree Mariano García Calatayud (74 years old) given the possibility that he may have been detained by the Russian Army during a demonstration against the invasion held in Kherson on Monday.