Latest news from the war in Ukraine, live | Zelenski assures that the country will not accept an ultimatum: “They would have to destroy us all” | International 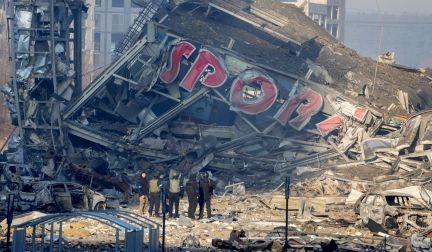 On the 26th day of the war initiated by Russia against Ukraine, these are the key data at 2:00 p.m. on Monday, March 21:

No agreement for the evacuation of Mariupol. The Ukrainian authorities have agreed with Russia to open eight humanitarian corridors to allow the evacuation of civilians this Monday. It is not planned that any of these corridors will be opened for the port city of Mariupol, on the coast of the Sea of ​​Azov (southeast), subjected to a constant siege by the Russian army for more than two weeks and whose surrender has been unsuccessfully requested by the Kremlin. The High Representative of the European Union for Foreign Affairs, Josep Borrell, said this Monday: “What is happening in Mariupol is a huge war crime.”

Eight fatalities in an attack on a shopping center in kyiv. Russian troops have bombed a shopping center in kyiv tonight, where eight people have died, as confirmed by the city’s mayor, Vitali Klitschko. The alderman has announced a new curfew in the Ukrainian capital, from 8:00 p.m. local time [las 19.00 hora peninsular española] this Monday until 7:00 on Wednesday. Stores, pharmacies and gas stations will remain closed on Tuesday.

Victimless attack on a residential area in Odessa. Ukraine has accused Russian troops of attacking the city of Odessa (south), in the first attack on the port city on the Black Sea. Local authorities report a bombing of housing blocks on the outskirts of the city, the heart of the former imperial Russia due to its geographical and cultural importance. There have been no fatalities, according to the balance of local authorities. Precisely, the Government of Bulgaria has warned of the presence of explosive mines floating adrift in the Black Sea, which have been dragged from Odessa and put maritime traffic in the entire area at risk.

New bilateral meeting without success. Negotiations to achieve a peace agreement in Ukraine continued on Monday with a videoconference call between the delegations from kyiv and Moscow. According to David Arajamia, leader of the party of the Ukrainian president, Volodymyr Zelensky, in Parliament, they will continue to speak with the Russian delegation throughout the day.

115 children killed, two million children displaced, 72 schools destroyed. At least 115 boys and girls have died and another 148 have been injured since the beginning of the Russian offensive in Ukraine, according to data provided on Monday by Daria Herasimchuk, adviser to the Ukrainian president on children’s rights, during a press conference. . Herasimchuk has reported that more than two million children have crossed the country’s borders and she has recalled that international adoptions are currently paralyzed due to the impossibility of carrying out all the necessary procedures. In total, 72 schools have been totally destroyed in different cities of the country.

25,000 Ukrainians arrive in Spain since the beginning of the war. The Minister of Inclusion, Social Security and Migration, José Luis Escrivá, assured this Monday that some 25,000 Ukrainians have arrived in Spain since the start of the war almost a month ago. Of this figure, some 9,000 have already been granted temporary protection that ensures them the residence and work permit approved by the European Union.

PHOTO: A group of people examines the damage after the bombing of a shopping center in kyiv, this Monday. AP Photo/Efrem Lukatsky

NBA: LeBron James, Joel Embiid and James Harden… together in Philadelphia? The latest rumor that shakes the NBA

NBA: LeBron James, Joel Embiid and James Harden... together in Philadelphia? The latest rumor that shakes the NBA