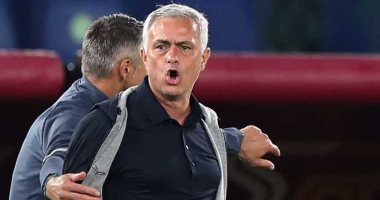 The press conference of Jose Mourinho, coach of the Roma team, after the end of the derby match against Lazio, which was decided by the latter with a score of 3-2, witnessed a state of chaos, after the Wolves coach entered into a verbal altercation with a journalist, in addition to his refusal to the method of the press conference, which Lazio chose her as the owner of the match.

Italian website Calciomercato reported that Mourinho left his press conference after the match, after an argument with Sky Sports journalist Angelo Mangianti and other reporters, and left the conference room visibly upset.

The report added that the Roma coach also objected to the method of the press conference chosen by Lazio club as the owner of the match, through Mourinho answering the questions of journalists on the screen without the presence of only a few of them, in order to answer their questions.

Mourinho summoned the delegate of the Calcio League to object to the method of the press conference, but the delegate said: “This is the method chosen by Lazio,” which made the Portuguese coach lose his nerve.

He added: “This is the way Lazio chose their coach, I am the coach of Roma.”