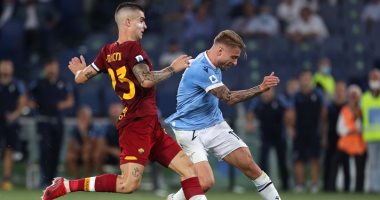 Lazio beat its neighbor Roma 3-2 in the exciting capital derby match that brought the two teams together on Sunday evening at the “Olympico” stadium, as part of the sixth round of the Italian League championship for the current season 2021/22.

Lazio ended the first half of their match with a 2-1 lead. Lazio’s goal came through Sergei Milinkovic-Savic in the 10th minute, and Pedro Rodriguez in the 19th minute, while Roger da Silva scored Roma’s only goal in the 41st minute.

The matches of the sixth round of Calcio will be completed with a meeting between Naples and its guest, Cagliari, at quarter past nine in the evening, Sunday.