The heir to a South Carolina legal dynasty who reported being shot in the head on Saturday on a rural road, three months after his wife and son were murdered, was forced to resign from his law firm the day before amid allegations of missing millions, it has emerged.

Alex Murdaugh released a statement through his attorney, Dick Harpootlian, on Monday morning saying that he was leaving his law firm and entering rehab.

‘The murders of my wife and son have caused an incredibly difficult time in my life,’ the statement read.

‘I have made a lot of decisions that I truly regret. I’m resigning from my law firm and entering rehab after a long battle that has been exacerbated these murders.

‘I am immensely sorry to everyone I’ve hurt including my family, friends and colleagues.

‘I ask for prayers as I rehabilitate myself and my relationships.’

Yet by Monday evening it emerged that Murdaugh had in fact resigned from his legal company amid allegations of missing millions. 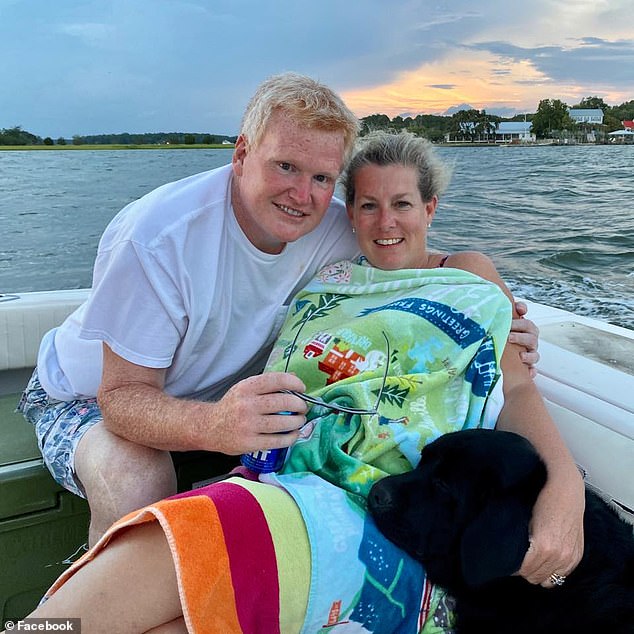 He was a partner at the law firm P.M.P.E.D. — known by the initials of its partners — which was founded by Murdaugh’s great-grandfather more than a century ago and is well-known in South Carolina’s Lowcountry.

In a statement to The New York Times, the firm said that it had hired a forensic accounting firm to investigate the suspected misappropriation of funds and that it had also notified the police and the South Carolina Bar.

Jim Griffin, another of Murdaugh’s lawyers, confirmed his resignation.

The resignation and allegations of missing millions provides yet another astonishing twist in a story that has baffled South Carolina.

Murdaugh, 53, told police on Saturday that was shot by a gunman in a truck that drove past him as he changed a tire – and then made a U-turn.

Authorities have released few details about the incident which comes three months after the still-unsolved double murder of Murdaugh’s wife, Maggie, and son Paul.

He called 911 at around 1:30pm EST Saturday, Griffin said on Sunday, after Murdaugh was shot by a passing truck in Hampton County, South Carolina. 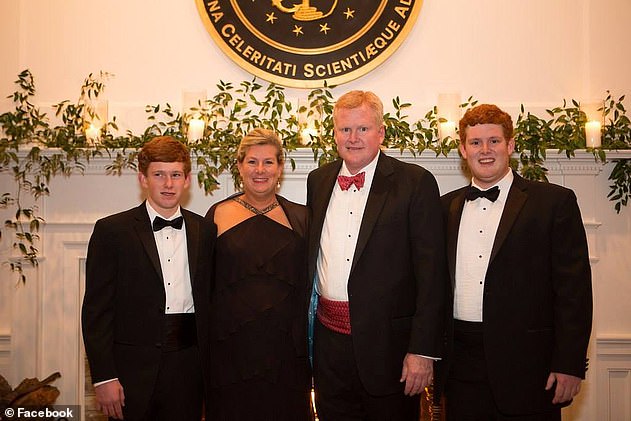 Alex Murdagh, pictured second from right, was shot on Saturday. His wife Margaret, second from left, and son Paul, furthest left, were found shot dead at the family’s hunting lodge in June. Far right is the couple’s other son Buster 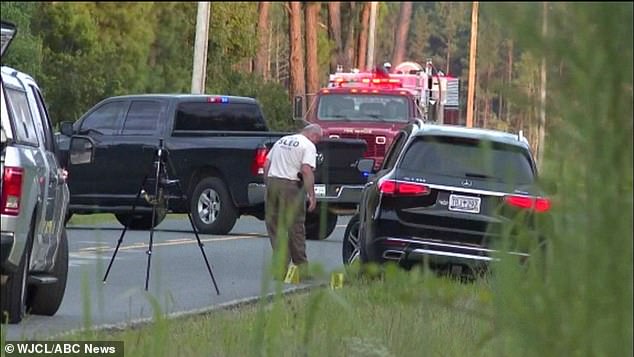 Alex Murdaugh’s Mercedes-Benz SUV, which the 53-year-old was changing a tire on when a passenger in a passing truck shot him in the head, causing ‘superficial head wounds’

Around 45 minutes after making that call, Murdaugh then phoned his brother Randy, and has called his sibling again since being airlifted to a hospital in Savannah, Georgia, for further treatment.

Murdaugh was released on Monday and entered rehab.

Randy is said to have told Griffin that the truck initially passed by Alex Murdaugh without incident, as he changed the tire of his black Mercedes-Benz SUV on Salkehatchie Road.

But the driver of the truck then turned around and drove toward Murdaugh.

Moments later, the gunman inside the truck opened fire, it has been alleged.

As of Monday, no arrests have been made.

Murdaugh suffered superficial wounds in Saturday’s shooting, with Griffin saying that the contact with his relative – who can’t see him in person because of COVID protocols – bodes well for his recovery, according to the Post and Courier.

Griffin spoke after the the Murdaugh family released a statement Saturday evening, saying they have ‘suffered through more than any one family can ever imagine.’ 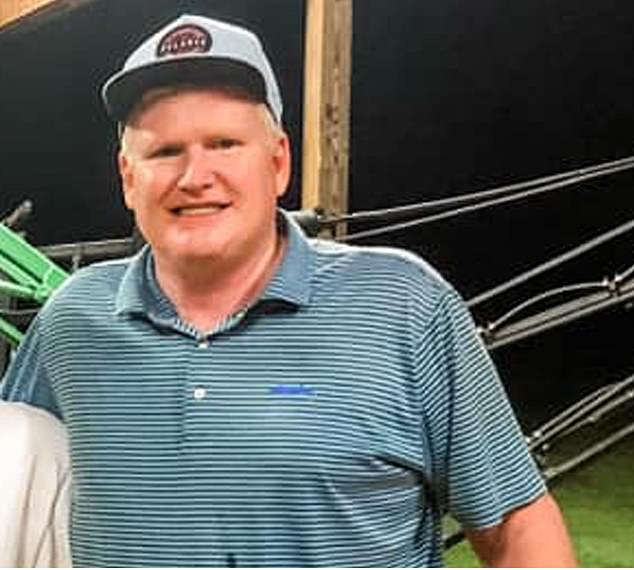 Alex Murdaugh, 53, (pictured) was found suffering from at least one gunshot wound on a rural road in Hampton County, South Carolina, on Saturday 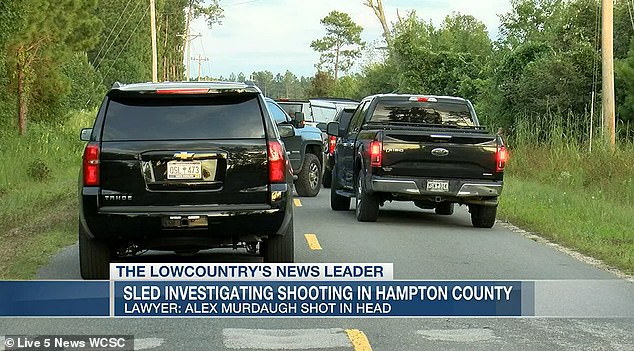 The statement added: ‘We expect Alex to recover and ask for your privacy while he recovers.’

Griffin told the Island Packet the widower had been on his way to Charleston hours before the shooting, but had ‘car trouble’, and stopped.

Griffin said Murdaugh’s brother, Randy, told him what had happened.

Multiple sources close to the Murdaugh family also told FITS News the injuries were ‘not self-inflicted’.

No suspects have been named and authorities have not released any information other than the South Carolina Law Enforcement Division (SLED) confirming it is investigating the shooting of Alex Murdaugh.

Law enforcement officials previously told WSAV.com Murdaugh was at a property in the 15000 block of the rural road at the time.

SLED – which is also leading the investigation into Maggie and Paul’s deaths – was called out to the scene at 1:30pm EST Saturday to work with the Hampton County Sheriff’s Office in their investigation.

Law enforcement was still on the scene late Saturday.

Footage posted by Live5 News shows a heavy police presence and the area taped off.

SLED spokesman Tommy Crosby confirmed to DailyMail.com the individual shot was Alex Murdaugh but said ‘no other details are available’ at this time.

DailyMail.com has also reached out to the Hampton County Sheriff’s Office for information.

It is unclear if Murdaugh was targeted in the alleged attack or if it was random.

However, the incident comes almost three months to the day that Murdaugh said he arrived home to find his son Paul, 22, and wife Maggie, 52, shot dead in the grounds outside the family’s hunting estate in Islandton, South Carolina.

He was the third generation to serve as 14th Circuit Solicitor, having held the position from 1985 to 2005. 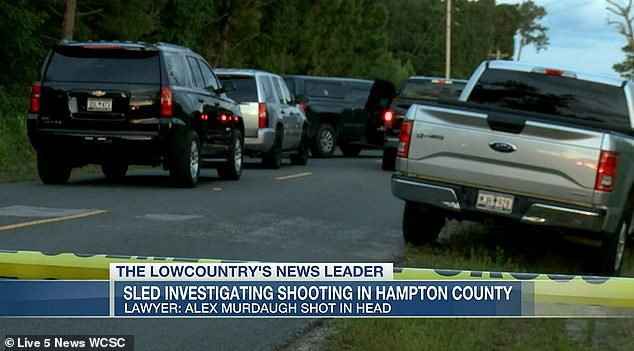 Murdaugh’s attorney Jim Griffin said he had been on his way to Charleston hours before the shooting, but had suffered ‘car trouble’, and paused his trip. The scene pictured 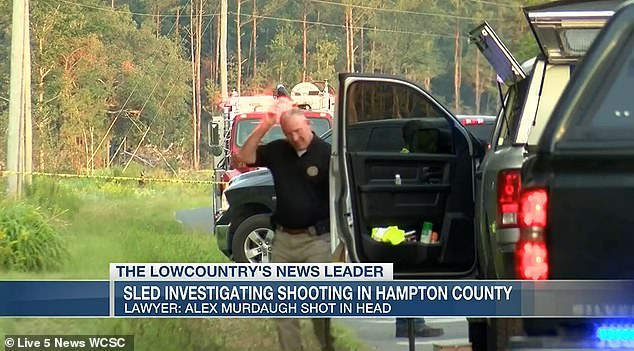 Murdaugh was changing the tire on his car along the road when a truck drove by and someone in the vehicle shot him, according to his attorney

Paul, 22, and Maggie, 52, were found dead from multiple gunshot wounds just after 10pm on June 7.

Two different guns were used in the shootings.

The murders remain a mystery with no arrests, suspects or persons of interest named by authorities – and no one also formally ruled out of the investigation.

The case has fueled speculation nationwide as Paul, a student at the University of South Carolina, has been linked to at least two other mysterious deaths in the area.

Paul was awaiting trial on charges relating to the 2019 boat crash death of a 19-year-old woman, who was thrown from the boat when Paul was allegedly drunkenly behind the controls.

He has also been linked to the 2015 death of a gay teen whose body was found by the side of a road.

The Murdaughs’ housekeeper also died in a ‘trip and fall’ accident which resulted in the family settling a wrongful death lawsuit.

Police said Alex Murdaugh called 911 at 10.07pm reporting that he had found Maggie and Paul’s bodies when he returned to the family home. 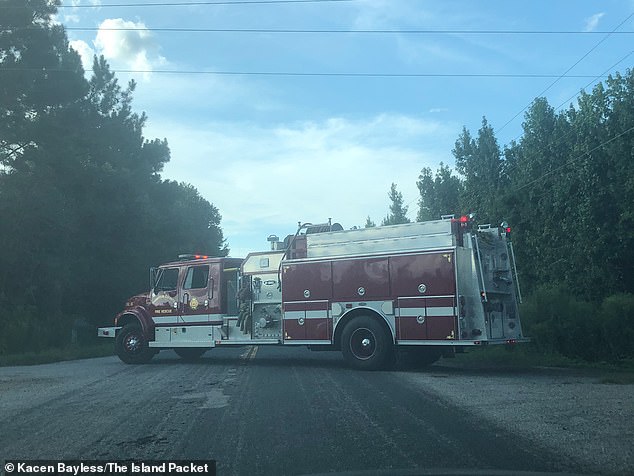 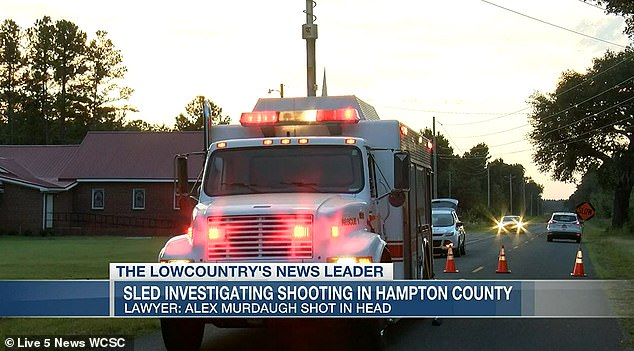 The scene of the shooting above. Murdaugh was said from the start to be conscious and speaking

Murdaugh was interviewed by officers investigating his wife and son’s death on June 10, three days after the murders, and volunteered a sample of DNA to investigators.

Sources close to him have said he has a ‘cast iron alibi’ for the night of the killings.

Police released the heartbreaking 911 call in July after coming under increasing pressure to make records relating to the high-profile murders public.

In the six-minutes of audio obtained by DailyMail.com Murdaugh is heard sobbing and gasping in distress as he tells the dispatcher ‘my wife and child have been shot badly’ and repeatedly pleads with them to ‘please hurry’.

He says neither Paul nor wife Maggie were breathing when he found them by the kennels of their estate, and that he has not seen anyone else in the area or noticed anything out of place.

Investigators also released the CAD (Computer Aided Dispatch) report of the night of the killings.

It shows that police impounded a 2021 Chevrolet Suburban owned by Hampton based law firm Peters, Murdaugh, Parker, Eltzroth and Detrick – where both Murdaugh and his brother work.

The SLED has come under increasing pressure to solve the case and release information to the public as the killer or killers remain at large.

Speculation has mounted from the start that Paul was the target of the murder and his mother was simply in the wrong place at the wrong time.

At the time of his death, Paul was awaiting trial for the February 2019 boating death of Mallory Beach.

Beach died when the boat Paul was driving under crashed into a piling on Archers Creek after a night of drinking and an oyster roast.

Paul was on a $50,000 bond and facing three felony counts – two of boating under the influence and one of causing death and bodily injury.

According to legal documents seen by DailyMail.com Paul was ‘highly intoxicated,’ ‘drunk’, and ‘belligerent,’ that night.

Other mysterious deaths in the family’s past have also come to light, with police investigating the double murder announcing they had reopened their probe of a 2015 death of a gay teen. 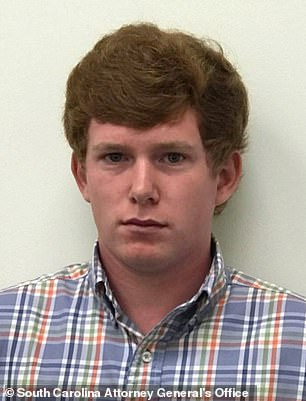 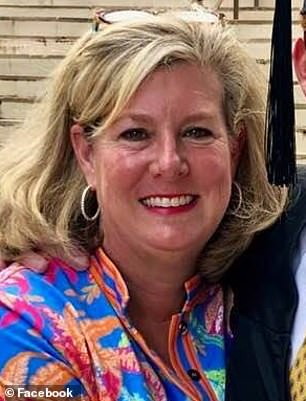 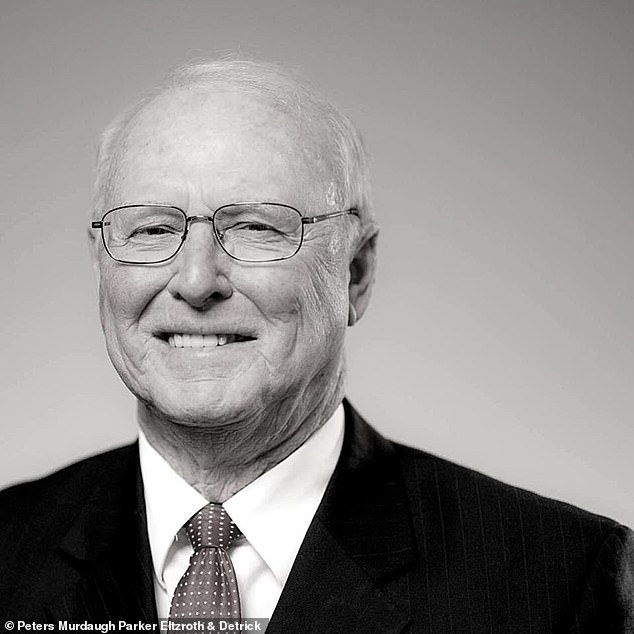 Stephen Smith, 19, was found dead in July 2015 in the middle of Sandy Run Road around 15 miles from the Murdaugh family’s hunting lodge.

DailyMail.com revealed that – despite investigators on the scene being convinced of foul play and finding no evidence of any vehicle involvement – the death was written off as a hit-and-run.

Police said he was struck by a vehicle while walking on a two-lane road after his car ran out of gas.

Stephen’s mother has always believed it was a hate crime, and that her son was beaten to death, rather than being struck by a vehicle, and his murder covered up.

No one has ever been arrested or charged over his death but investigators at the time received anonymous tips suggesting Paul and his older brother Buster as persons of interest, according to FITSNews.

A survivor of the 2019 boat crash suggested in a deposition, unveiled in court last month, that Paul may have been involved in Smith’s death. 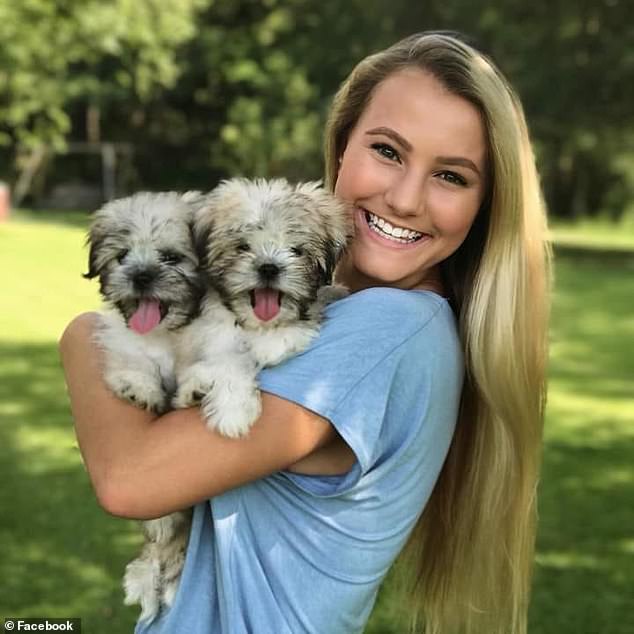 Paul had been awaiting trial on charges relating to the 2019 boating death of Mallory Beach (pictured), who was thrown from the boat Paul was allegedly driving while drunk when he crashed it 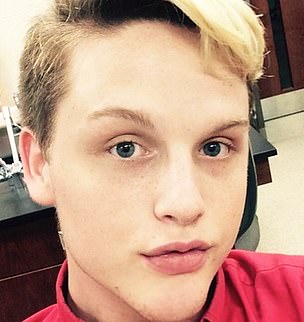 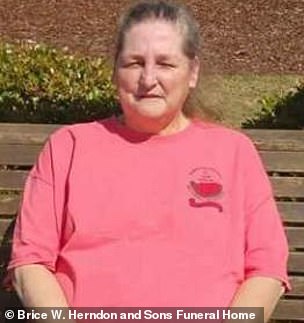 Cops investigating the double murder have also reopened the case into a 2015 hit-and-run of teen Stephen Smith (left). In 2018, Alex Murdaugh also settled a wrongful death claim in the ‘trip and fall’ death of their 57-year-old housekeeper Gloria Satterfield (right)

Connor Cook said in January 2020 he had lied about the night of the boat accident out of fear of what the Murdaughs would do, claiming they had gotten away with crimes in the past.

‘Anything they get in, they get out of. I’ve always been told that,’ Cook said in the deposition.

‘One was said that Paul [Murdaugh] had pushed his housemate down the stairs, and she died, and nothing ever happened.

‘And another one, there was something that Paul was supposedly involved with a guy, got found beat up in the middle of the road, that they got out of.’

In 2018, Alex Murdaugh settled a wrongful death claim in the ‘trip and fall’ death of their 57-year-old housekeeper Gloria Satterfield.

The SLED Midlands division is handling the investigation into the deaths of Smith and the Murdaughs.

The agency took over the investigation into the double murder after the Colleton County Sheriff’s Office handed over the case due to the Murdaugh family ties to the 14th Circuit solicitor’s office.

Three generations of the family – Alex’s father, grandfather and great-grandfather – ran the office nearly consecutively from 1920 through 2005.