James Maddison said recently that he wanted people to start talking about him again and if he continues to play like this, Gareth Southgate will soon be one of them.

The Leicester midfielder delivered a thrilling performance, scoring two goals – the second a spectacular curling effort with his weaker left foot – and tormenting Brighton to move Brendan Rodgers’ side third in the table, just a point adrift of leaders Tottenham and second-placed Liverpool.

Both Maddison’s strikes arrived before half-time, either side of Jamie Vardy’s 12th goal of the season, to give the Foxes complete command. 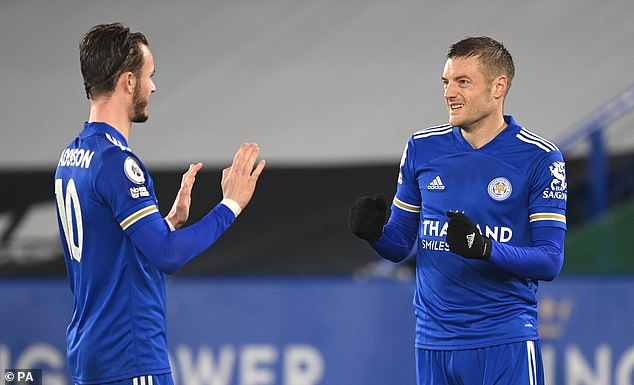 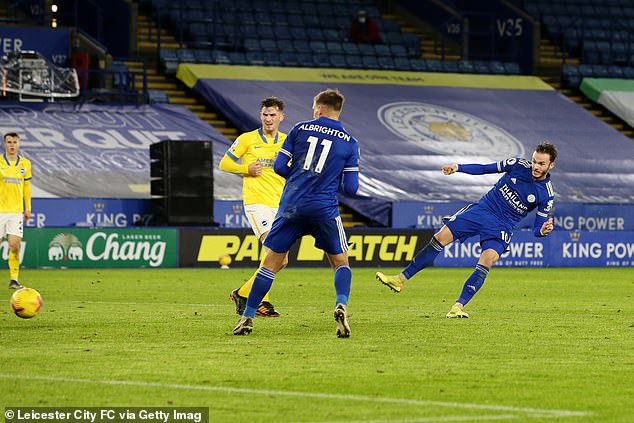 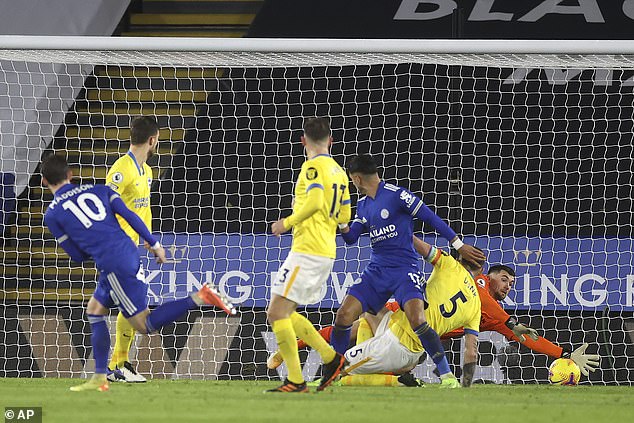 After Danny Welbeck had wasted a glorious opportunity to put Albion in front, Rodgers switched from a back three to a back four and Leicester never looked back.

As well as Maddison, James Justin was outstanding on the right flank.

Maddison has plenty of competition for attacking midfield roles with England and won his only senior cap more than a year ago, as a substitute in a Euro 2020 qualifier against Montenegro.

But the 24-year-old told Sportsmail last month: ‘I watch England now and I know there’s a gap for me’ and on this evidence, it will be hard for Southgate to disagree.

Rodgers has regularly played down Leicester’s prospects but though they lack the depth of the wealthiest clubs, they are a serious force in this form.

Much has been made of the injury crises at other leading clubs, yet the Foxes have been without Wilfred Ndidi, Ricardo Pereira, Caglar Soyuncu and Timothy Castagne for significant periods this term and Rodgers has barely complained.

They are setting an impressive pace in the league and are seeded for Monday’s last-32 draw in the Europa League. The challenge now is to sustain it for a whole season.

Maddison looked in the mood from the first moments. He sent a rising drive wide and then set up Marc Albrighton for a shot that was too close to Brighton ‘keeper Mat Ryan. 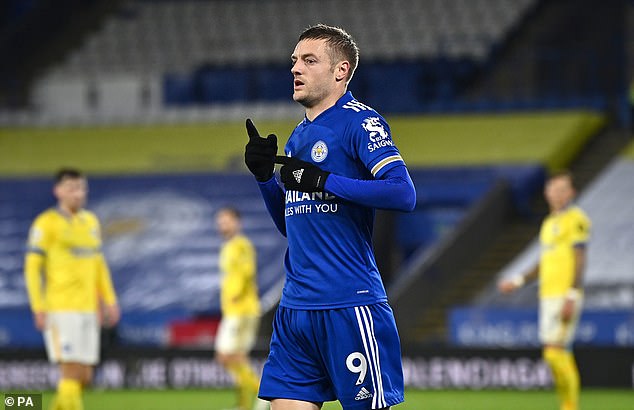 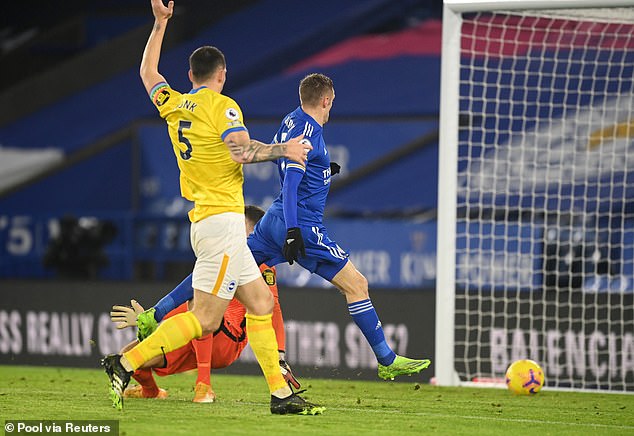 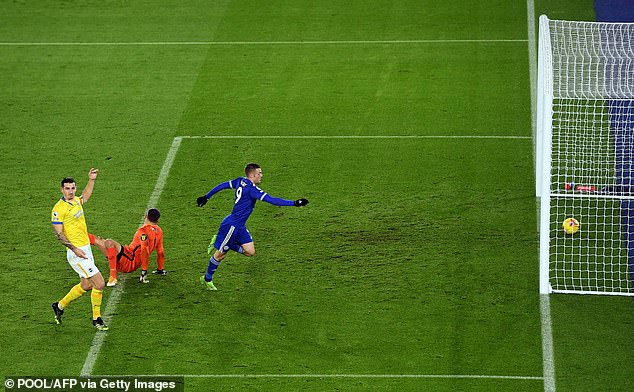 Yet in the early stages, Graham Potter’s men were dangerous, even without Tariq Lamptey who Potter said was rested ‘as a precaution’.

Solly March raced down the left in the sixth minute and from his low cross, Alireza Jahanbaksh’s 20-yard effort was well saved by Kasper Schmeichel.

Schmeichel did even better to keep the score level three minutes later. Once again March – who was lively early on – found space and released Jahanbaksh, who sent Welbeck bearing down on goal. The former Manchester United forward’s finish was on target but Schmeichel diverted it over the bar with his boot.

That persuaded Rodgers to switch to a back four and send Justin to the right-back, with Albrighton moving to left midfield. It worked perfectly, with Justin exposing Brighton left-back Dan Burn repeatedly.

One on occasion, Youri Tielemans found Justin with a brilliant diagonal ball and though Justin nipped the ball past Ryan, Vardy could only fire it against the outside of the post from a tight angle.

Leicester’s frustration lasted a matter of seconds. Justin’s cross was cleared by Ben White but only to Maddison, whose strike from 15 yards clipped Lewis Dunk and bounced over the arm of Ryan, who slapped the ground in fury.

Ryan recovered to make a fine save on the half-hour, following another fluent Leicester move. Ndidi – making his first league start since September – picked out Justin with another angled ball and the full-back found Ayoze Perez, whose first-time effort looked destined for the corner but was pushed around the post. 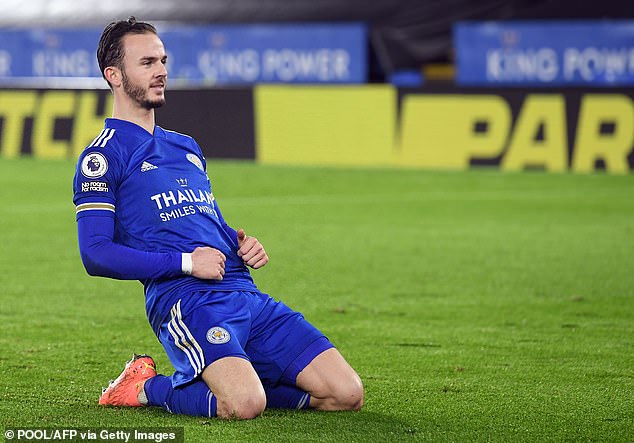 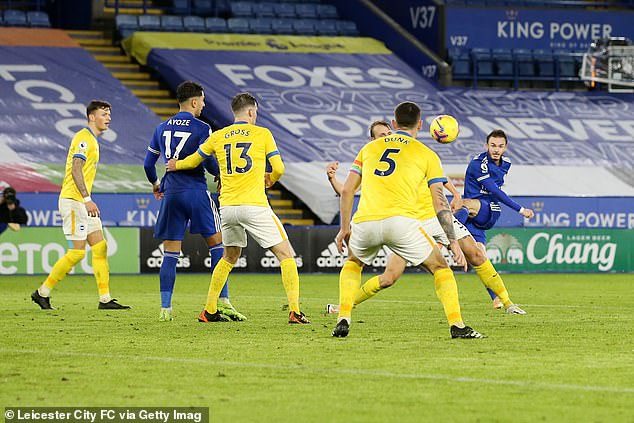 Just moments after Vardy’s goal, Maddison swivelled and curled in a brilliant shot 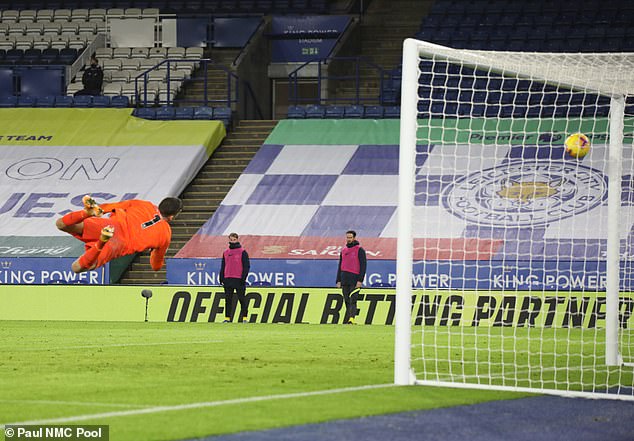 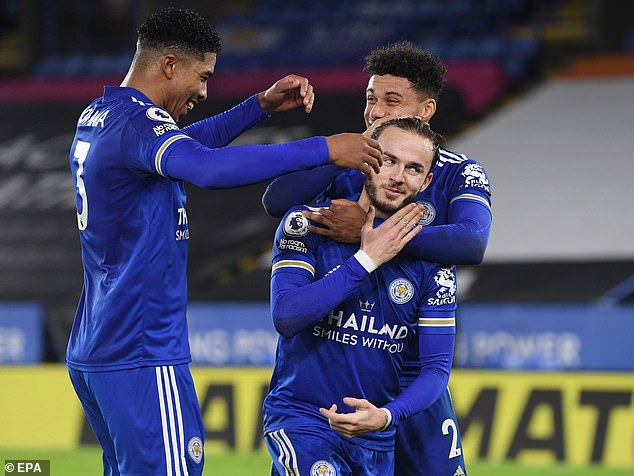 With Leicester playing some of their best football of the season, a Vardy goal seemed inevitable and sure enough, the master marksman delivered four minutes before the break. Perez collected Albrighton’s lofted ball and freed Justin in another perfect crossing position. Vardy did the rest from close range and a long VAR check did not save Brighton.

Maddison had never scored twice in a match for Leicester before this and he will never forget the first time he did so. Another swift passing sequence involving Ndidi, Maddison and Perez sent Vardy running into space.

The striker steered the ball into Maddison’s path and after beating the bewildered Burn, he found the top corner from just inside the area.

With a hat-trick in his sights, Maddison looked a little grumpy when he was replaced by Dennis Praet with 15 minutes remaining, but this display gave his club and country plenty to smile about.