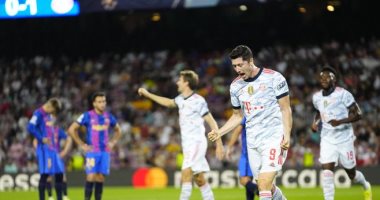 Bayern Munich striker Robert Lewandowski scored the first goal against Barcelona, ​​Spain, in the 56th minute of the fiery confrontation that is currently taking place between them at the Camp Nou, in the first round of Group E of the Champions League for the current season 2021/2022. The result became the Bavarian lead 2-0.

It is expected that the match will witness a great rivalry because it is considered revenge for the disastrous memory of the Spanish champion after the loss in the last confrontation between them with eight goals to two goals in favor of the Bavarian in the same competition.

Koeman seeks to win against Bayern to erase the bad image after the last confrontation between them, in addition to sending a strong message to all competitors that Barca is coming to compete for all titles this season, after he arranged his papers by strengthening the ranks after the sudden departure of Argentine star Lionel Messi to Paris Saint-Germain..

On the other hand, Nagelsmann hopes to continue the superiority of Bavarian against Barcelona, ​​in addition to continuing to provide a distinguished level this season, similar to what he presents in the German League championship..