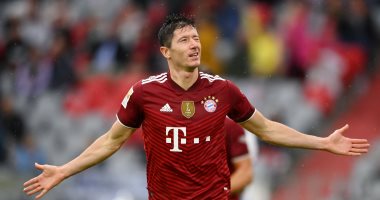 Press reports revealed that Bayern Munich striker Robert Lewandowski is close to returning to his team’s attack against Barcelona tomorrow, Tuesday, in the first round of the group stage of the Champions League..

Barcelona will host Bayern Munich tomorrow, in a new confrontation between the two teams, in Group E, which also includes Benfica and Dynamo Kiev..

And the Spanish newspaper, “Mundo Deportivo”, confirmed that the Pole suffered an injury after facing Leipzig, but he trained normally with the group and is ready to face Barcelona..

The newspaper pointed out that the Polish player stood smiling in front of the cameras and drew the victory sign in Bayern Munich training, stressing that he had been cured, and announced his readiness to face Barcelona, ​​after he quickly returned to the team..

Attacking star Robert Lewandowski and his colleague Kingsley Coman trained within the ranks of the German football team Bayern Munich before traveling to Spain to face Barcelona, ​​​​the scheduled, while doubts swirl about Serge Gnabry, who missed the start of the training.

His colleague Serge Gnabry, Bayern’s player, continues training alone and it seems that he will be excluded from facing Barcelona tomorrow, in addition to Tolisso, who has not trained well during the past two days due to some knee pain..

Newcomer Marcel Sabitzer will be available on the list of players under coach Julian Nagelsmann despite suffering a bruised arm, while Corentin Tolisso continues to be absent due to a calf injury..

The match is considered revenge in the first place after Barcelona fell in Group E in the group stage against Bayern Munich with a harsh score of 8-2, which prompted everyone to wonder, will Barca succeed in taking revenge on the Bavarian, in the Champions League season 2021-2022, especially after the departure of the legend Lionel Messi.

The Camp Nou stadium will open its doors against Barcelona against Bayern Munich, next Tuesday evening, in the first round of the group stage of the Champions League..