Make that NINETY TWO wins! Awesome Lewis Hamilton battles back from crazy start to dominate in Portugal and surpass Michael Schumacher to set new record for most race victories in F1 history

Lewis Hamilton made Formula One history in the Portuguese Grand Prix by winning for a record 92nd time.

The 35-year-old from Stevenage largely dominated the race to move ahead of Michael Schumacher, the retired legend who is now stricken at home after a terrible skiing accident seven years ago.

The landmark triumph also took Hamilton yet closer to a seventh world title, a haul he would then share with the German. 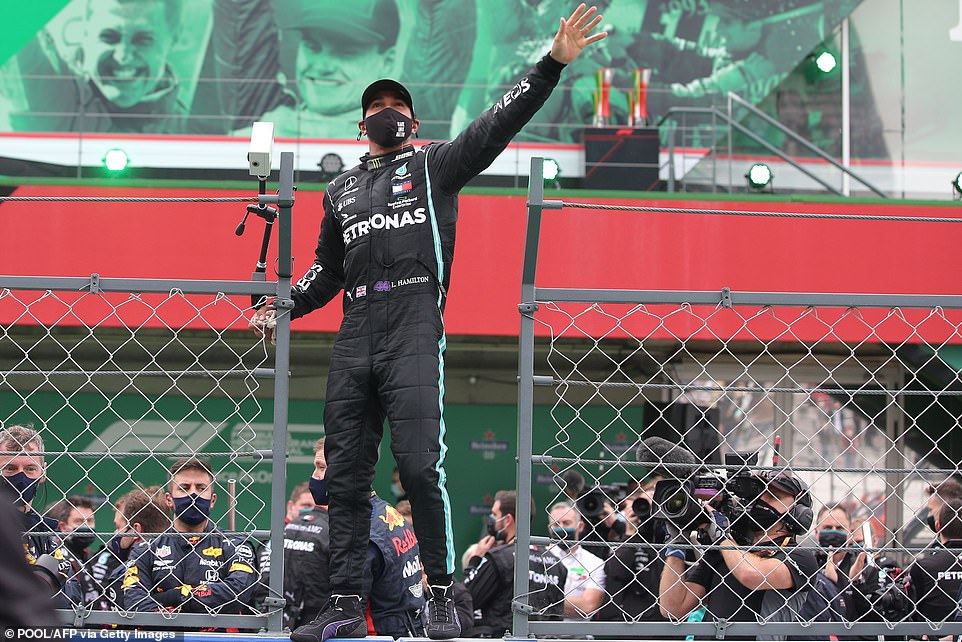 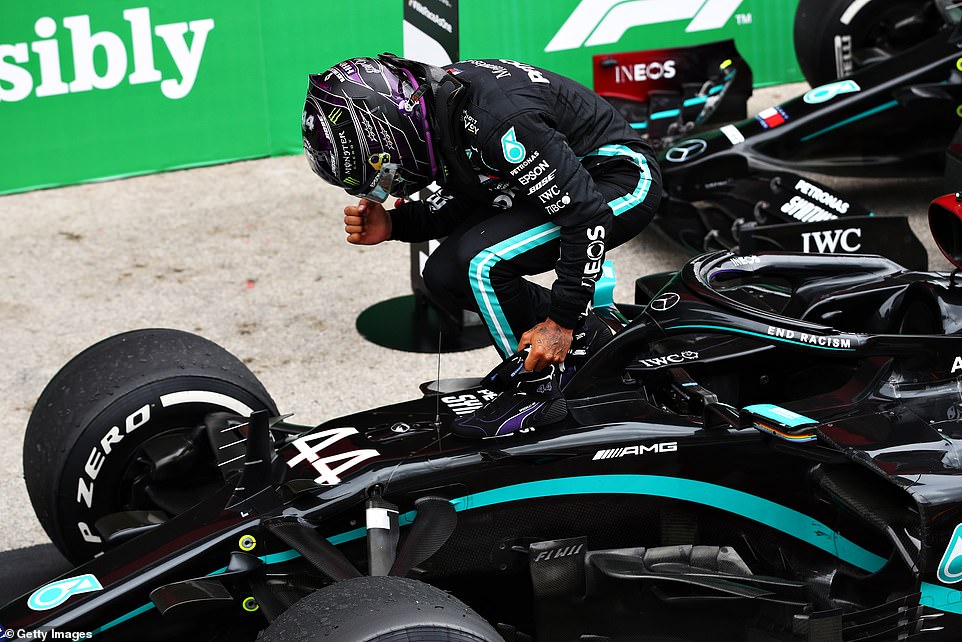 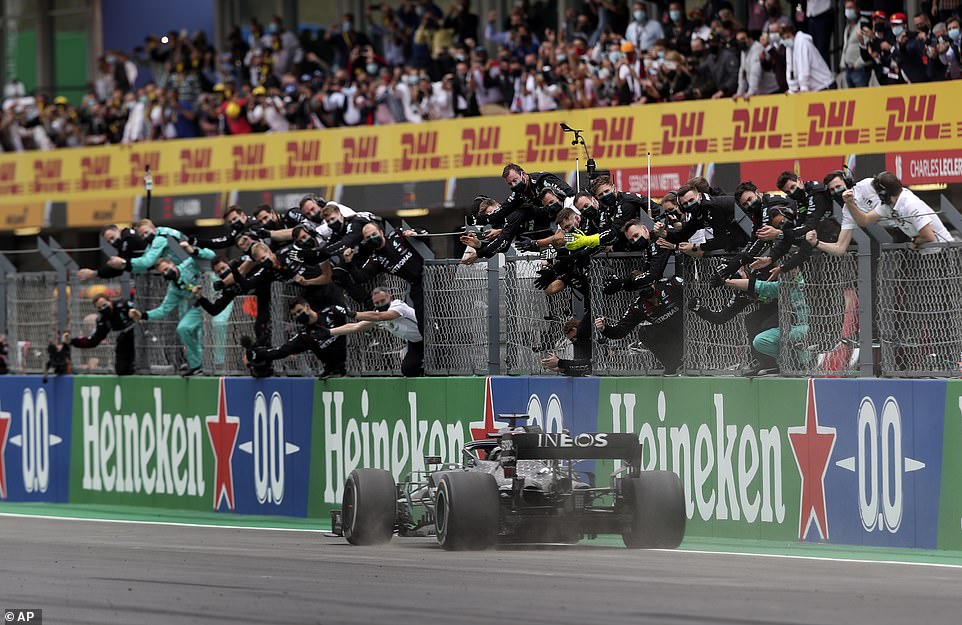 But that near-inevitable elevation to another high-water mark can wait. There is this magic afternoon in the Algarve to savour first. It came about after a captivating opening first few laps. Hamilton, unable to get his medium tyres working in the windy, cool, autumnal air, was momentarily skating around the Portimao track.

Although away cleanly from pole position, he was soon passed by Mercedes team-mate Valtteri Bottas and McLaren’s Carlos Sainz.

This was not in the script. Nor was Sainz taking the lead on lap one. But until the sixth lap, when Bottas overtook him, that is how it was. Giddy moments for the British team and their Spanish driver.

Hamilton, running third, then passed Sainz. He followed this up by banging in three consecutive fastest laps to put himself right on the tail of Bottas.

What followed was as inevitable as night following day.

Hamilton duly passed the Finn at the start of lap 20. After you Claude! Too easy. 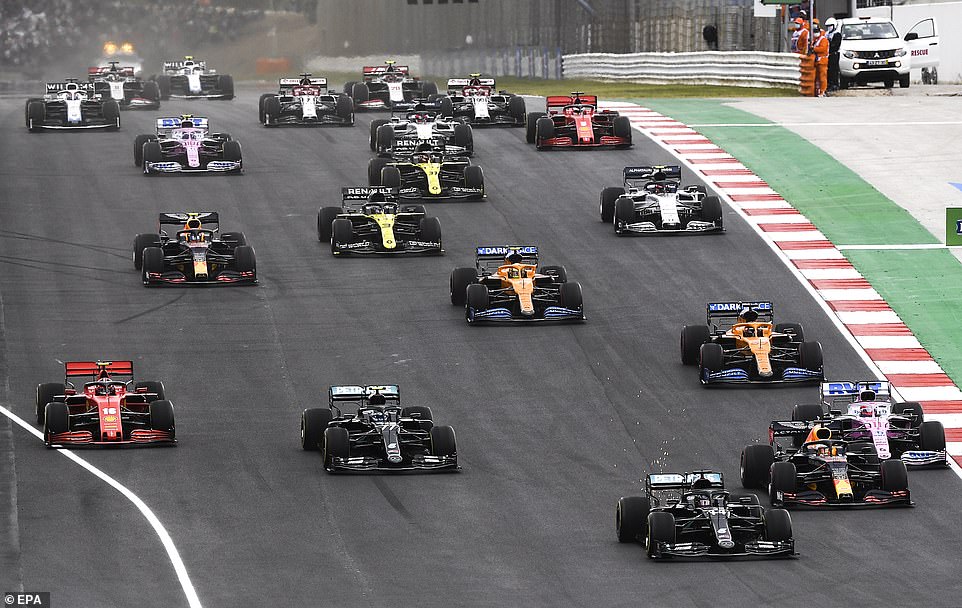 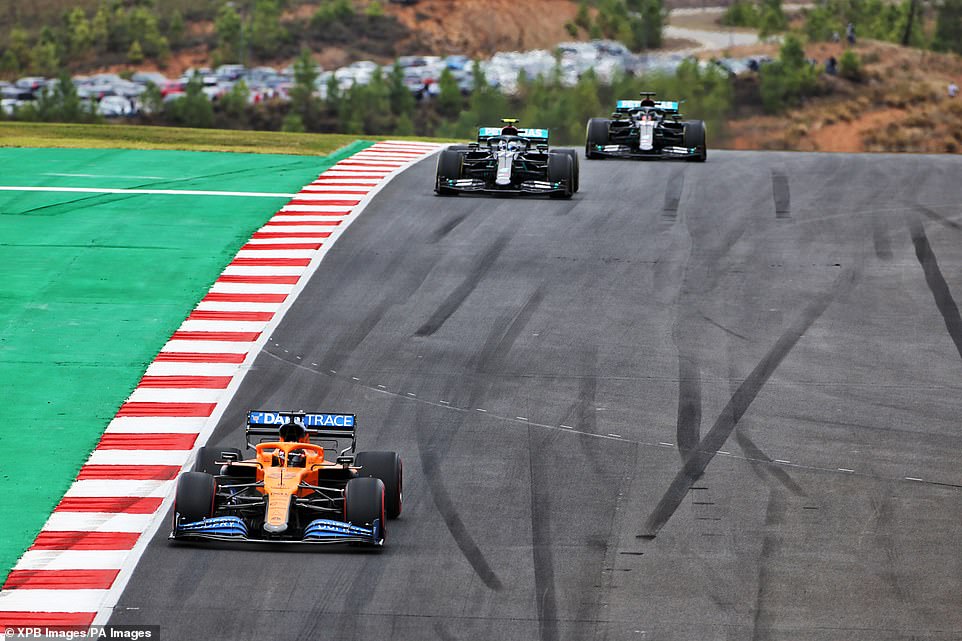 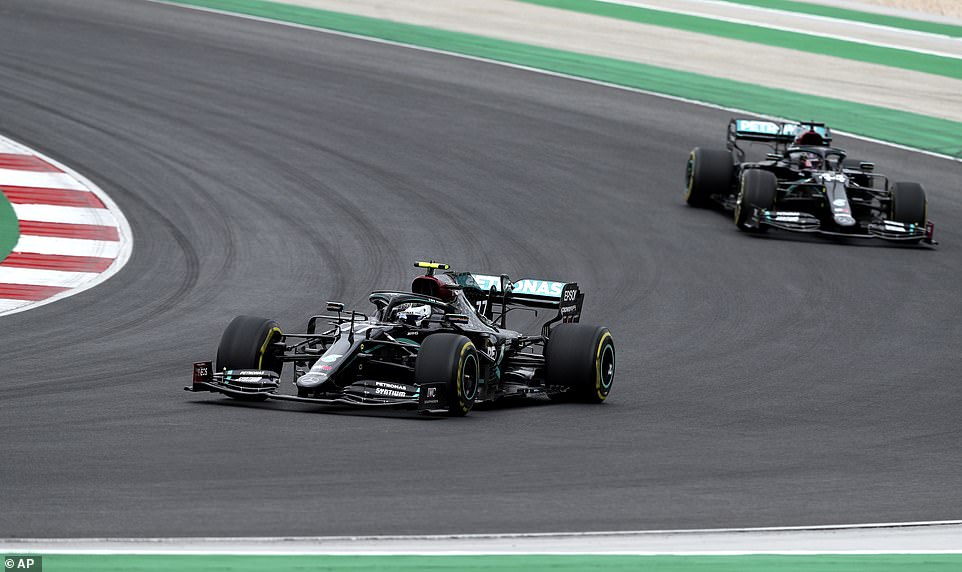 And then the Briton was away. Whereas a few moments earlier the champion had been worried about his tyre wear, now he was in his element, opening up a lead of seven seconds in nine pulverising laps. He now declared his rubber in fine fettle.

The only concern on Hamilton’s horizon was contained in the grey clouds that framed this rollercoaster circuit. A few times he asked if rain was coming. He was reassured that little or any precipitation would fall. There were, in fact, drops of the lightest drizzle for much of the race.

Off Hamilton rode majestically into the pages of history. His Mercedes is a car on its own. He, in turn, is a driver on his own, putting light years between himself and Bottas – 25 seconds. Max Verstappen finished third for Red Bull with Charles Leclerc fourth for Ferrari. 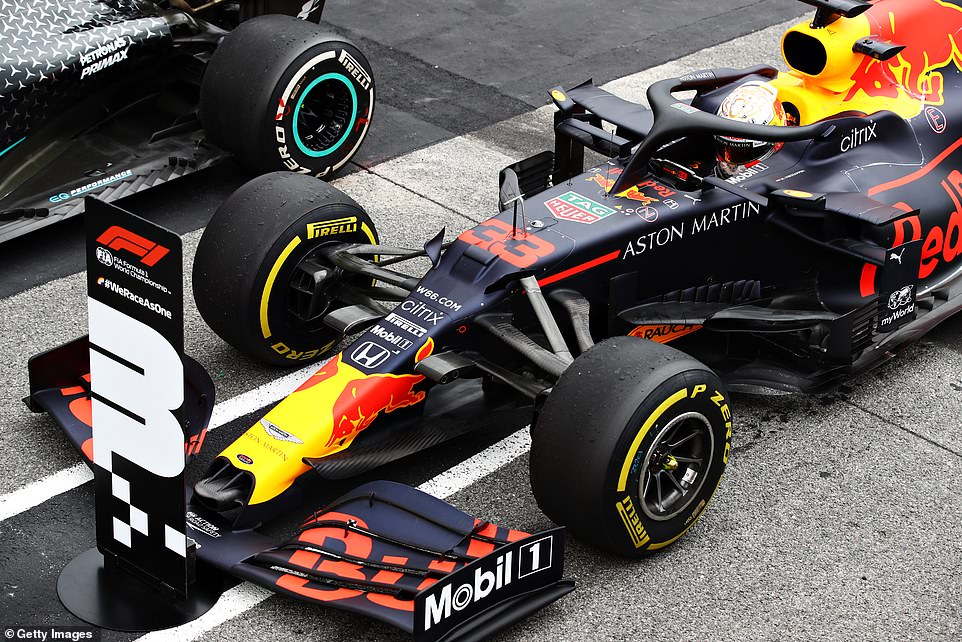 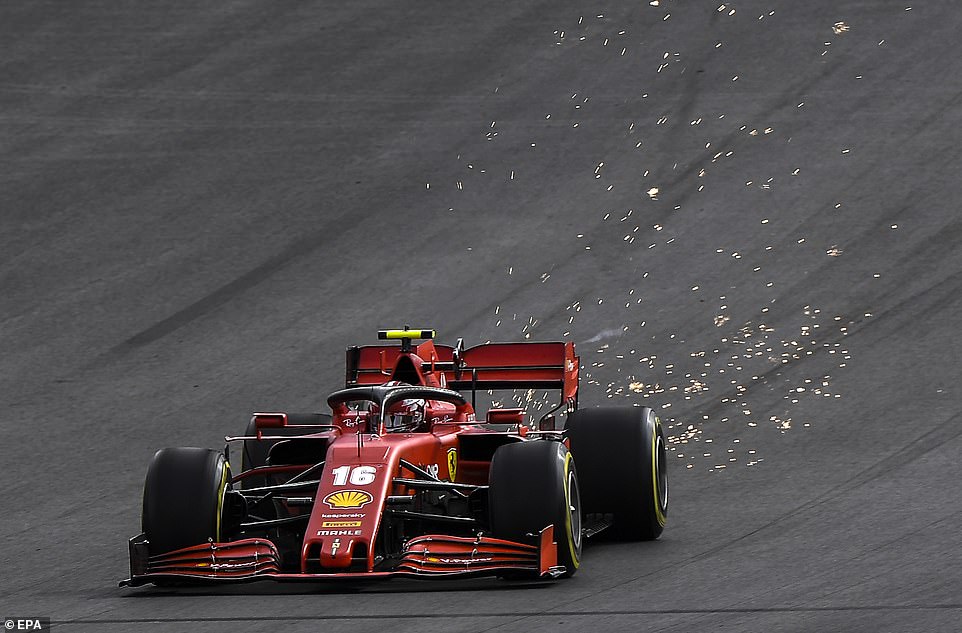 But nobody was in the frame once Hamilton put his foot on the larynx of his would-be pursuers the moment he took the lead.

Joy for Hamilton 13 years after he opened up his account in Canada in 2007, his maiden triumph that presaged the glory that was to come.

Aged 35, he will now aim for a century of victories, his ability and fitness virtually undimmed.

Perhaps the other star performer on the day was Racing Point’s Sergio Perez. He was punted by Verstappen on lap one, fell to the back but scrapped his way up from the very back to finish seventh. 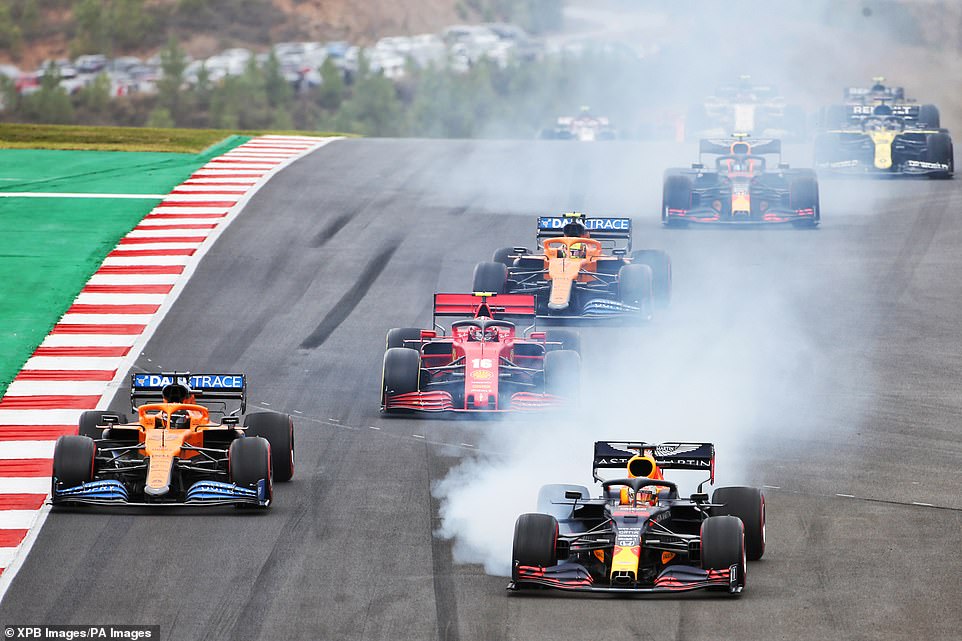 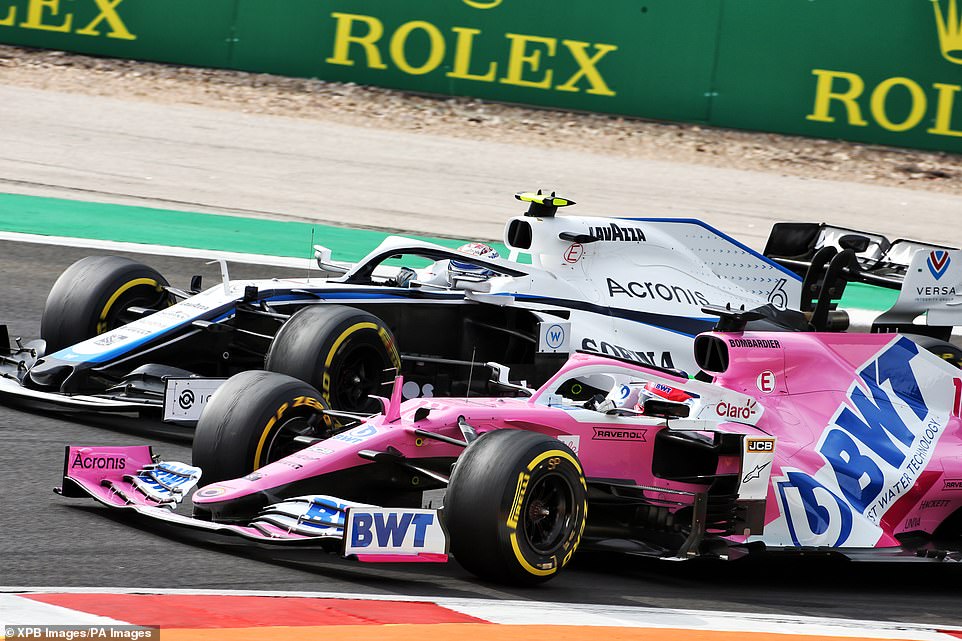 His team-mate Lance Stroll suffered double ignominy – penalised for causing a collision with McLaren’s Lando Norris and then for an abuse of track limits. He retired.

By the time the action had ended Hamilton had lapped all but the top four. He leads Bottas by 77 points with 130 on offer.

He set the fastest lap for good measure.

RE-LIVE ALL THE PORTUGUESE GP ACTION…

Lewis Hamilton continues to home in on his seventh world championship but he is on course to set break one of F1’s biggest records at the Portuguese Grand Prix.

Follow Sportsmail’s DAN RIPLEY for live Formula One coverage from Portimao for all the action as it happens.