Lewis Hamilton’s achievements in F1 ‘don’t mean as much’ as those of Brits, says Ronnie O’Sullivan 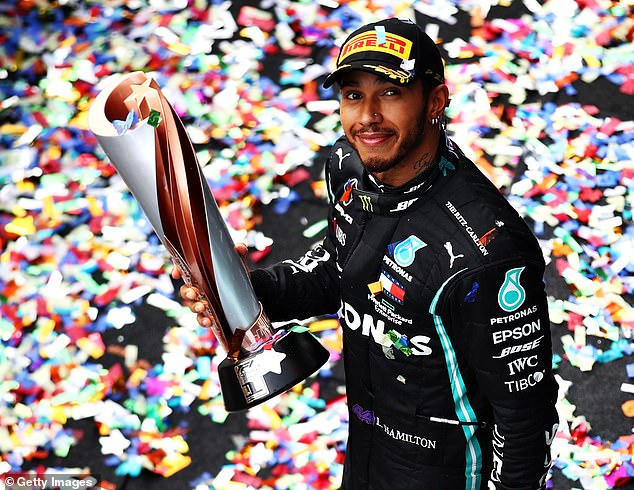 
‘It’s like he’s driving with a cigar’: Lewis Hamilton’s achievements in F1 ‘don’t mean as much’ as those of Brits in other sports because of his advantage at Mercedes, says Ronnie O’Sullivan – as the knighthood debate rumbles on

Ronnie O’Sullivan has questioned calls for Lewis Hamilton to receive a knighthood as the Formula One world champion is not on a ‘level playing field’ with his competitors.

Hamilton made F1 history on Sunday when he equalled the legendary Michael Schumacher’s record with a seventh world-title win. Nobody has won more world titles than the pair in the sport.

Following the stunning achievement, clamours for Hamilton – who has an MBE – to become a ‘Sir’ have grown from those within and out of F1.

However, snooker legend O’Sullivan believes Hamilton has an unfair advantage in the sport

However, O’Sullivan has suggested that is too hasty as the 35-year-old’s feats aren’t comparable to other Brits’, whose equipment doesn’t give them an unfair advantage like Hamilton’s Mercedes does.

‘If you have a car that is going a second a lap quicker than the other cars, in theory all he has to beat is his team-mate [Valtteri] Bottas – who seems to be comfortable and happy playing second fiddle,’ he told the Daily Star.

‘It is fantastic for Lewis to win seven world titles, but if your car is going around quicker you can afford to make a few mistakes and still get away with it.

‘It’s a bit like driving around smoking a cigar with one finger on the wheel!’

The 44-year-old was awarded an OBE in 2015 and has won six snooker world titles – with the latest one coming in August this year.

And comparing his sport to Hamilton’s, the snooker legend likened the driver’s ‘advantage’ to being able to pot balls into bigger pockets.

‘I just think sport is where there is no advantage,’ he continued. ‘I wouldn’t have felt as good about my career in snooker if I had been playing on a table where the pockets I was using were bigger than my opponent’s.

‘At least in snooker everyone has the same equipment and it is totally a level playing field. I don’t choose my opponents or the table.’