By Reuters and Natalie Rahhal Us Health Editor

Giving coronavirus patients an arthritis drug, on top of the antiviral, remdesivir, reduces their odds of dying by 35 percent, the drug’s maker, Eli Lilly announced Thursday.

The National Institutes of Health (NIH) sponsored study found that the combination worked best for patients sick enough to need supplemental oxygen, but not in critical condition.

Recovery times were also shorter across the board for people who got both the arthritis drug, barcitinib, and remdesivir.

Remdesivir is one of just two treatments that already has emergency use authorization for treating coronavirus, and has been shown to reduce death risks on its own.

For those on oxygen, getting both remdesivir and the arthritis  drug, barcitinib, was  linked with a 60 percent lower risk of death, compared to those who got only remdesivir.

But the arthritis drug is not cheap, costing an average of $2,265 for a 30-day supply of 2mg pills, according to Lilly’s website. 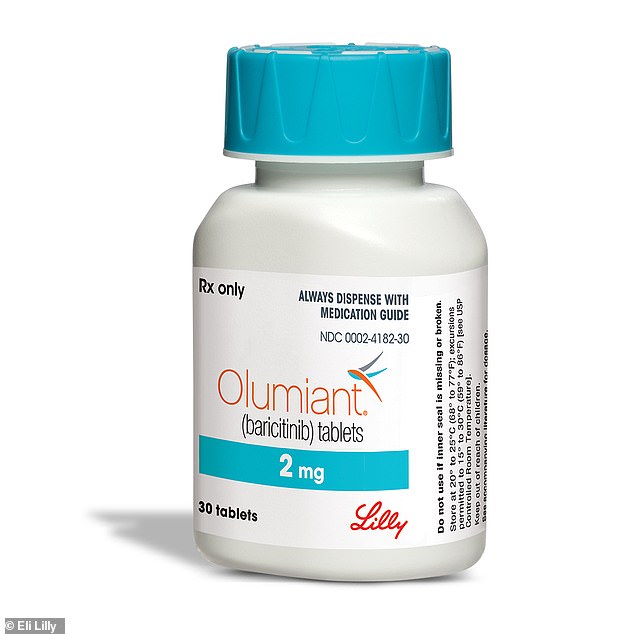 COVID-19 patients who got Eli Lilly’s  arthritis  drug, barcitinib (sold under the brand name Olumiant), in addition to remdesivir, were 35% less likely to die, an NIH study found

When Dr Anthony Fauci announced that the National Institute of Allergy and Infectious Diseases (NIAID) would end its trial of remdesivir early, it signaled that the drug was likely saving lives from COVID-19.

But not every life. The antiviral at first was only given emergency approval to treat the sickest patients.

Approval has been expanded but doctors have since been experimenting with different drugs that might complement remdesivir.

The antiviral – which was used to treat President Trump, in addition to a steroid and an experimental antibody cocktail – helps to stop SARS-CoV-2, the virus that causes COVID-19, from making copies of itself and spreading in the body.

But many patients die not because of the infection but because they become overwhelmed by inflammation from their body’s haywire response to the foreign invader.

Baricitinib, licensed by Lilly from Incyte Corp and approved to treat rheumatoid arthritis in the United States, could help suppress a potentially lethal immune response to COVID-19 called ‘cytokine storm’.

Because barcitinib treats rheumatoid arthritis, an inflammatory autoimmune condition, it was a promising candidate to pair with remdesivir.

Lilly said the effect was most pronounced in patients on oxygen therapy, according to data from a US government-backed trial, which however, was not designed to measure the effectiveness of baricitinib in preventing death.

In that group, the barcitinib and remdesivir combination was linked to a 60 percent reduction in death risks compared to those who got remdesivir alone.

In-line with data disclosed in September, the combination helped shorten the median recovery time by one day compared to remdesivir, meeting the study’s main goal.

Lilly said it was in talks with the FDA to gain emergency use authorization for treating COVID-19 patients.

Scotland: Shelley Kerr steps down as head coach of national side