The Project’s Lisa Wilkinson has slammed Donald Trump – labeling him a criminal after riots in the U.S. in which his supporters stormed Capitol Hill in Washington DC.

‘The fact that he refuses allow this peaceful transfer of power, in my mind makes him a criminal,’ she said. 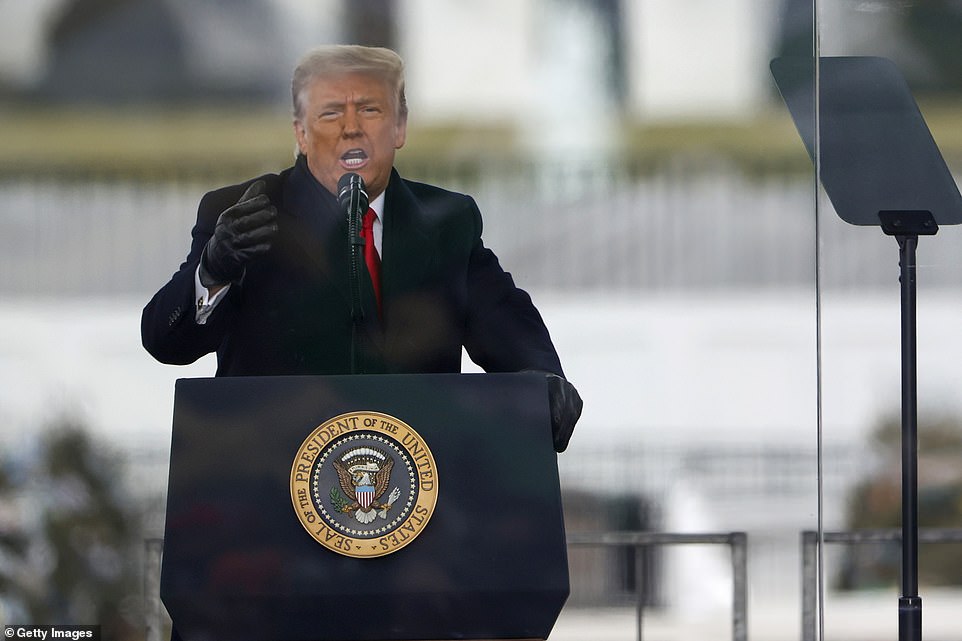 President Donald Trump speaks at the ‘Stop The Steal’ Rally on January 06, 2021 in Washington, DC. Trump supporters gathered in the nation’s capital today to protest the ratification of President-elect Joe Biden’s Electoral College victory over President Trump in the 2020 election 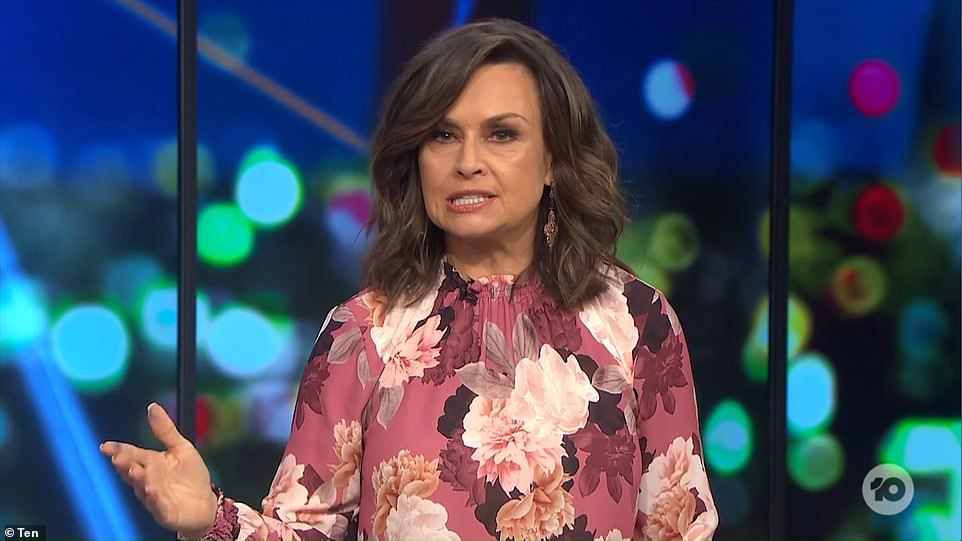 The Project’s Lisa Wilkinson (pictured) has launched an extraordinary attack on Donald Trump calling him a ‘criminal’ following riots on the U.S. capitol 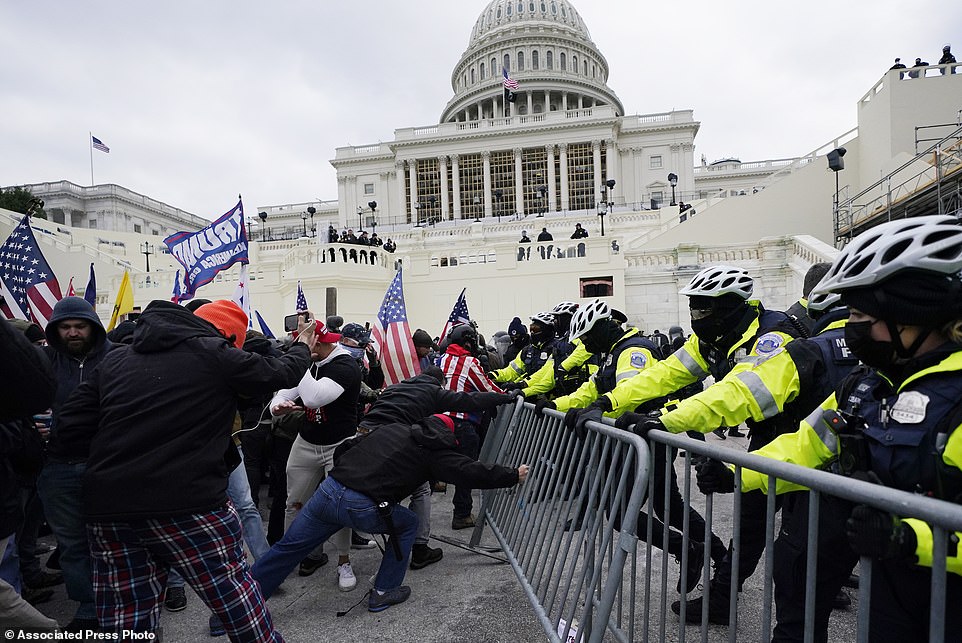 Trump supporters try to break through a police barrier, Wednesday, Jan. 6, 2021, at the Capitol in Washington. (AP Photo/Julio Cortez)

‘Mike Pence has been loyal to him for four years, there was no thanks to Pence today from Trump.’ Ms Wilkinson contuinued.

‘All of those people who have allowed this to happen, it was always going to end like this. Even still, it is so awful to watch this Great Western democracy just completely collapse.’

The chaos in the U.S. Capitol on Wednesday unfolded after President Donald Trump spent weeks whipping up his supporters with false allegations of fraud in the November 3 election, culminating in a call to march to the building that represents U.S. democracy.

Trump, who has refused to concede his loss to Democratic President-elect Joe Biden, had urged his supporters multiple times to come to Washington for a rally on Wednesday, the day the U.S. House of Representatives and Senate were scheduled to certify the results of the Electoral College.

‘Statistically impossible to have lost the 2020 Election,’ Trump, a Republican, tweeted on December 20. ‘Big protest in DC on January 6th. Be there, will be wild!’

They turned out in the thousands and heard the president urge them to march on the Capitol building to express their anger at the voting process and to pressure their elected officials to reject the results.

‘We’re going to walk down to the Capitol and we’re going to cheer on our brave senators and Congressmen and women,’ Trump told the crowd, speaking with the White House as a backdrop.

Appearing at what could be his last rally as the sitting president, Trump exhorted his supporters ‘to fight.’

‘We will never give up, we will never concede,’ Trump said, delighting the crowd by calling Democratic victories the product of what he called ‘explosions of bullshit.’

Trump has sought for weeks to thwart a peaceful transfer of power, aided by groups such as ‘Stop the Steal,’ which promoted https://stopthesteal.us the day’s protest and peddled false claims about voter fraud on Facebook and other social media.

In a statement posted on Twitter by White House spokesman Dan Scavino on Thursday, Trump said there would be an orderly transition of power ‘though I totally disagree with the outcome of the election’. 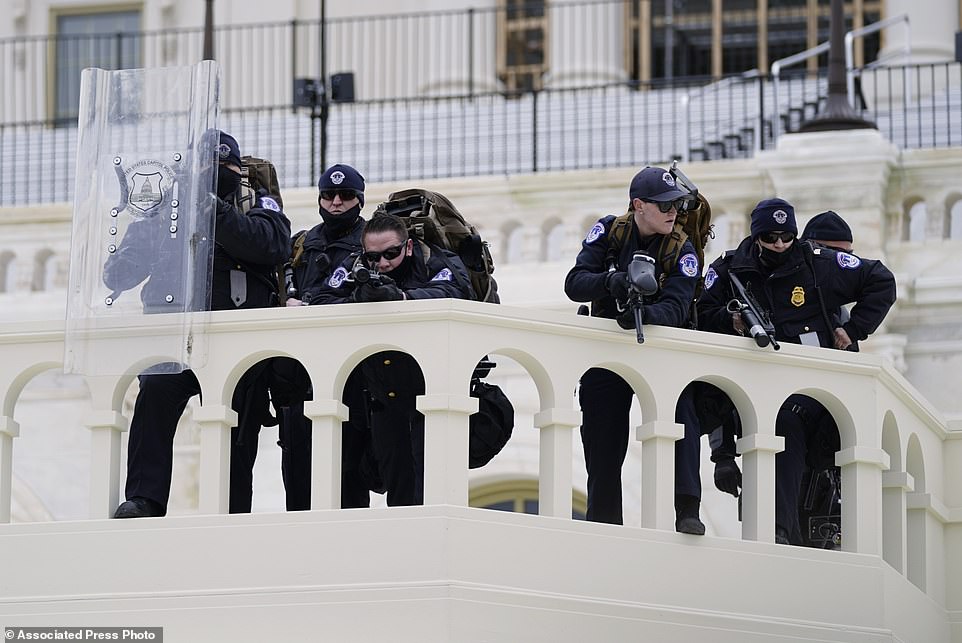 Police keep a watch on demonstrators who tried to break through a police barrier, Wednesday, Jan. 6, 2021, at the Capitol in Washington. (AP Photo/Julio Cortez) 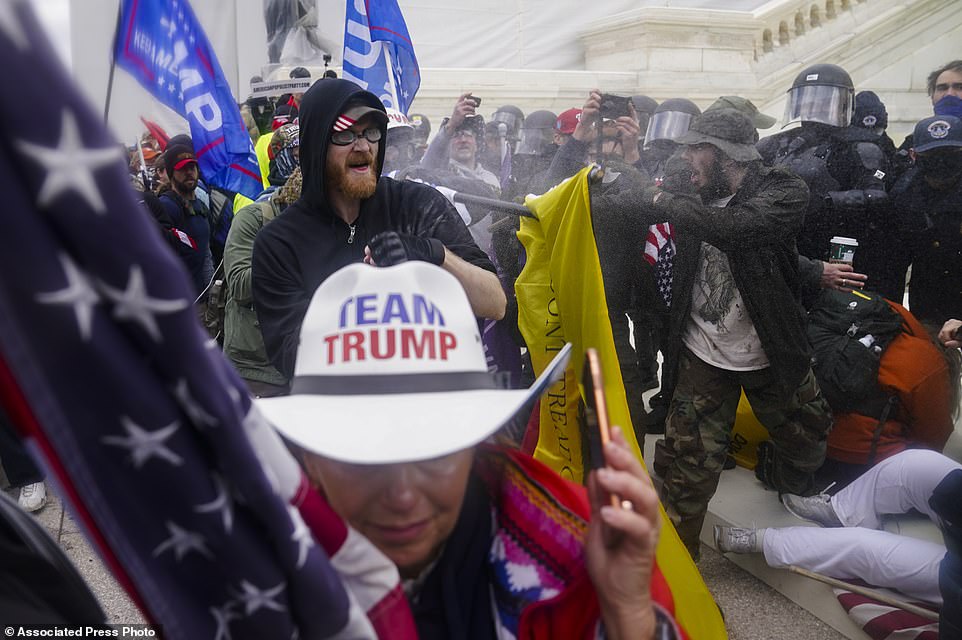 Trump supporters try to break through a police barrier, Wednesday, Jan. 6, 2021, at the Capitol in Washington. (AP Photo/John Minchillo)

But Wednesday’s events were the culmination of his efforts to thwart a peaceful transfer. About 50 minutes into the speech, some of his supporters, waving Trump flags, began heading toward Capitol Hill, where unprecedented mayhem ensued.

Protesters fought through police barricades, stormed the building and entered lawmakers’ chambers. The certification process was stopped and Vice President Mike Pence and members of Congress were evacuated.

One civilian was shot dead, Washington police said. As night fell, a Capitol official said the building had been cleared, but outside, some way from the grounds, scores of protesters remained, including members of militia and far-right groups.

Monitoring the scenes of violence on cable news television from the White House, Trump tweeted about an hour after the Capitol was put on lockdown that the protesters should ‘remain peaceful.’

As criticism mounted that he had incited a riot, he was urged to say more by a Trump stalwart, House Republican leader Kevin McCarthy, and some of the advisers who remain for his dwindling days in office.

Biden had come out forcefully on live television and said the violence was ‘not a protest, it’s insurrection.’ He called on Trump to demand ‘an end to this siege.’ 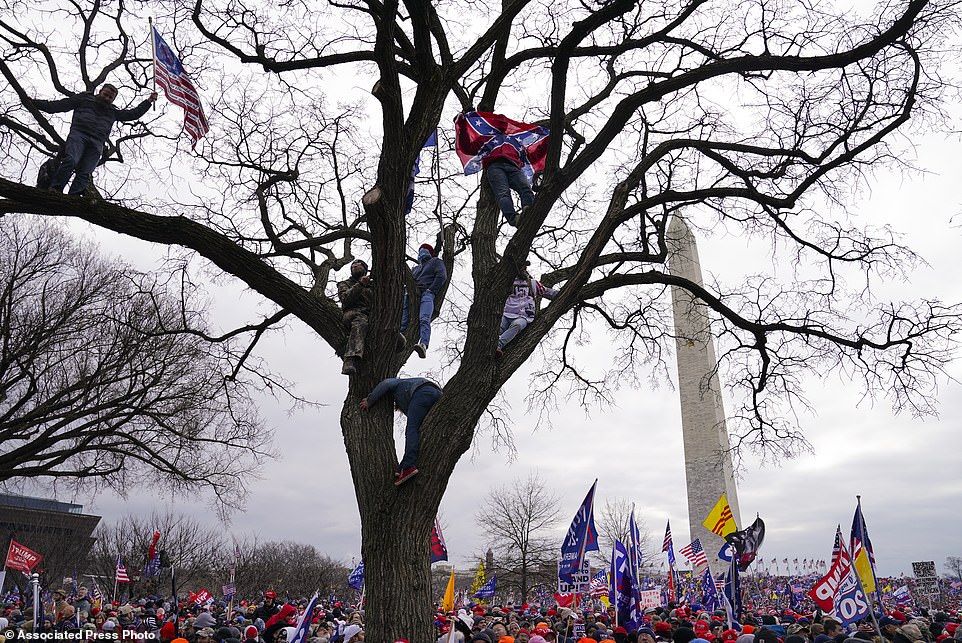 Trump supporters participate in a rally Wednesday, Jan. 6, 2021 in Washington. As Congress prepares to affirm President-elect Joe Biden’s victory, thousands of people have gathered to show their support for President Donald Trump and his baseless claims of election fraud. The president is expected to address a rally on the Ellipse, just south of the White House. (AP Photo/John Minchillo)

‘I know you’re hurt. We had an election that was stolen from us. It was a landslide election,’ Trump said, repeating familiar falsehoods. ‘But you have to go home now. We have to have peace. We have to have law and order.’

He posted another message that called the mob ‘great patriots’ who were reacting to an election victory ‘viciously stripped away.’ Twitter later hid three tweets and locked Trump’s account.

Three White House aides resigned after the violence at the Capitol and more were considering resigning before the end of Trump’s term. Biden will be inaugurated on Jan. 20.

Trump’s failure to rein in his supporters stood in sharp contrast to his attitude last summer when he threatened arrests and the use of force to break up protests against racial inequality.

During the Black Lives Matter protests, Trump discussed using the military in response, and an area near the White House was forcibly cleared for him to stage a photo-op in front of a church, holding a Bible.

Democrats and some Republicans blamed Trump for inciting the violence on Wednesday. 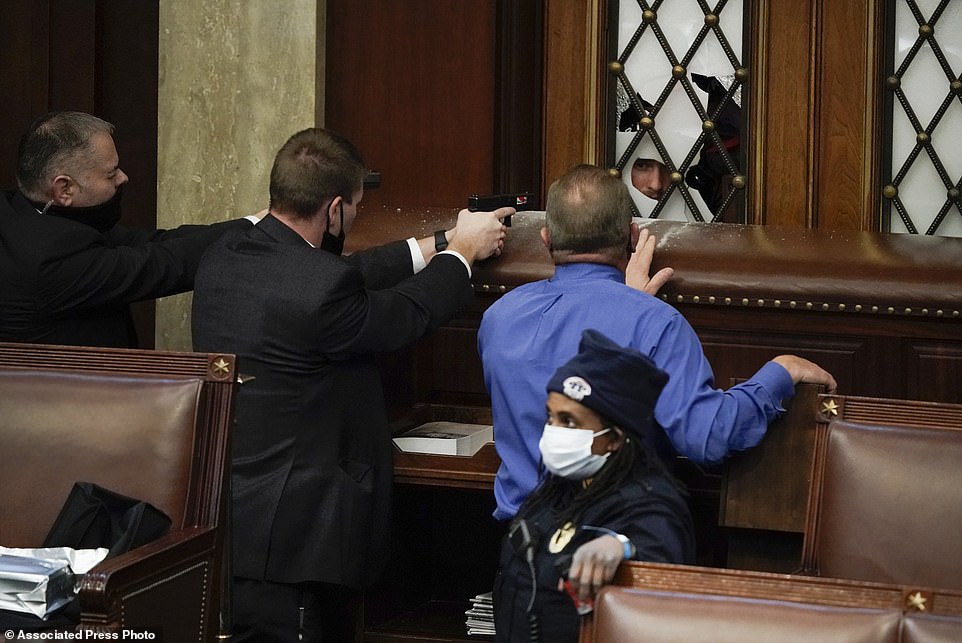 Police with guns drawn watch as protesters try to break into the House Chamber at the U.S. Capitol on Wednesday, Jan. 6, 2021, in Washington. (AP Photo/J. Scott Applewhite)

‘Today´s violent assault on our Capitol, an effort to subjugate American democracy by mob rule, was fomented by Mr. Trump,’ Jim Mattis, a former defense secretary under Trump, said in a statement.

Senator Mitt Romney, a former Republican presidential nominee, called it an ‘insurrection incited by the president of the United States.’

Weeks have passed since the states completed certifying that Biden won by 306 votes in the Electoral College to Trump’s 232, and Trump’s extraordinary challenges to the result have failed in courts across the country.

Yet Trump’s rally speech on Wednesday was filled with grievances and voter fraud allegations that have not been backed up with evidence.

He singled out several Republican lawmakers for criticism, including Romney and Representative Liz Cheney, while hailing as heroes those who have sided with him to stop the electoral votes from being certified.

Several times he also urged Pence to intervene. But while Trump was still speaking, Pence released a lengthy statement saying he would carry out his constitutional duty to certify the vote.

‘It is my considered judgment that my oath to support and defend the Constitution constrains me from claiming unilateral authority to determine which electoral votes should be counted and which should not,’ Pence wrote. 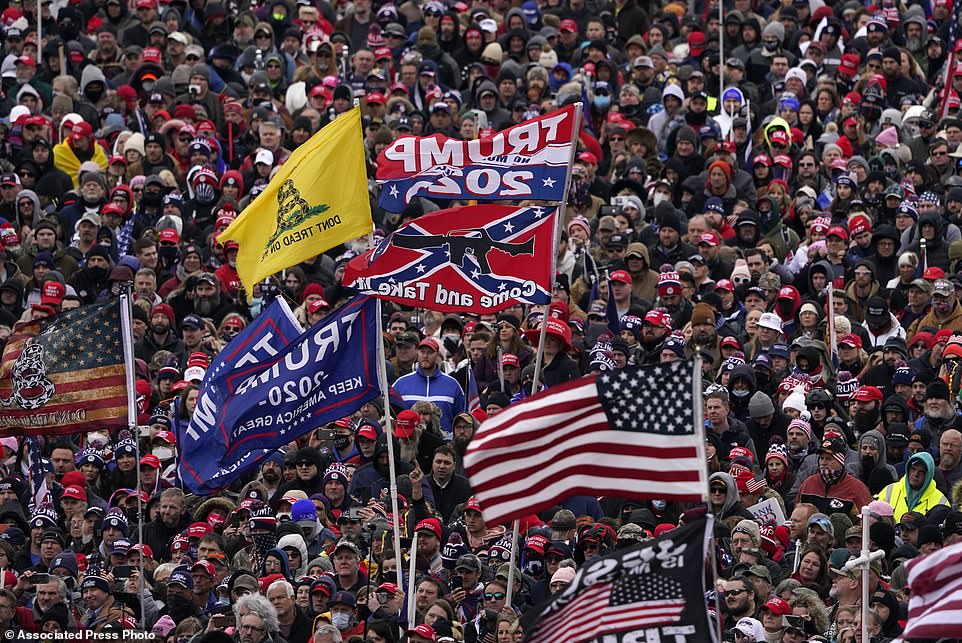 Biggest weekly movers: XLM, ADA, and NXM skyrocket in the first week of 2021